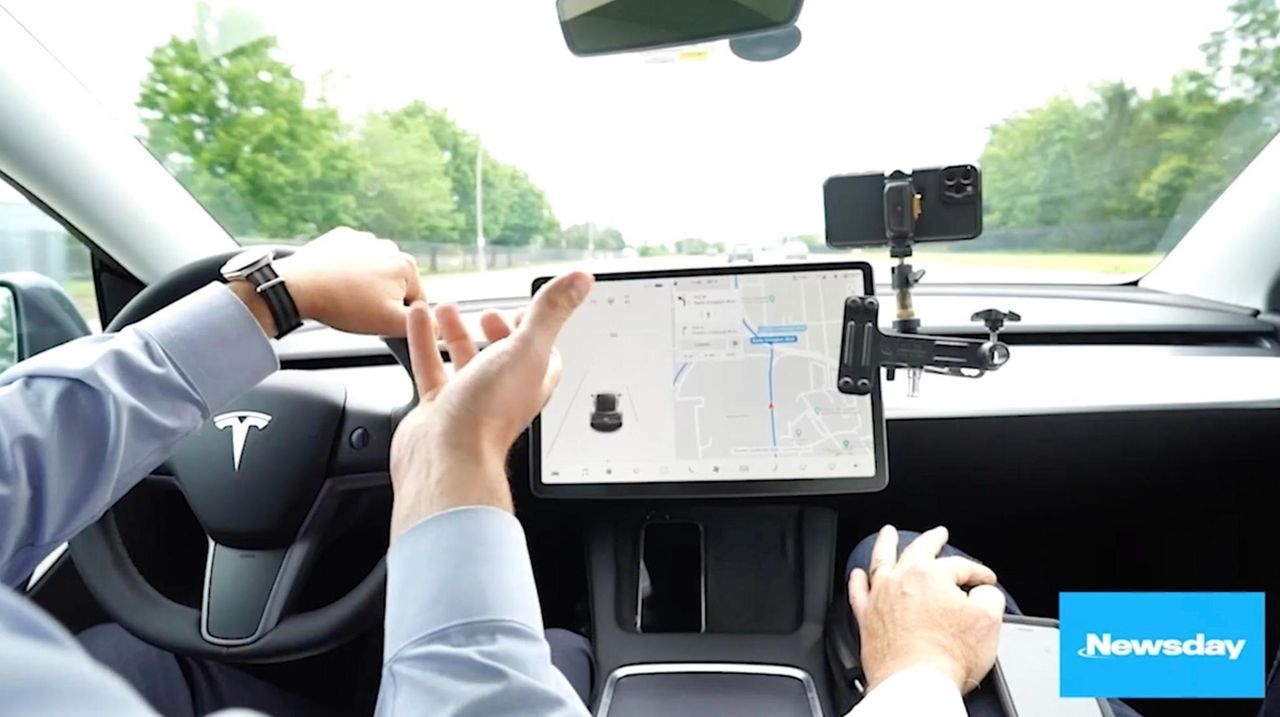 Mark Kenny of Huntington is on his third all-electric car and he's not looking back.

Kenny, a biology professor, said it's not just the fact that his 2019 Nissan Leaf never needs gas and rarely needs maintenance, or that it aligns with his principles of a low-carbon footprint (he also has solar panels).

"I was never a car guy, but I've become one," he said. "I really love it. You step on the accelerator and it just goes." His only reservation: He generally doesn't use the car for long trips, because his model has a 150-mile range capacity (newer ones can go beyond 300 miles on a single charge).

So Kenny was glad to hear that LIPA and PSEG are embarking on a plan to rev up the region's infrastructure for electric vehicles. "That would be super," he said, noting he currently uses the family's second car, a gasoline powered one, for longer trips. "If there were a better network of chargers I would take the car up to Maine."

As automakers race to bring more electric vehicles to market, LIPA and grid manager PSEG Long Island are racing to keep up by providing more chargers, more flexible recharging rates and ultimately an advanced grid with the capability to handle hundreds of thousands of plug-in cars in the coming decade.

PSEG recently issued a request to the state to spend $88 million to drastically increase the number of publicly available fast chargers for the cars, which draw kilowatts of energy rather than gasoline to power up, said Mike Voltz, director of energy efficiency and renewable energy programs for PSEG.

"We want to focus on charging and give discounts for charging at night," he said.

PSEG said about $66 million of the $88 million EV Make-Ready program would cover the cost of deploying and incentivizing the new charging stations; the $22 million balance includes costs to manage the program, computer system investments, consulting services, "lease management" and money to contribute to a state prize program for EVs. LIPA trustees and the state must approve the plan, and they could take it up later this year.

The local effort got a big federal boost earlier this month, when the Biden administration announced a goal to make electric vehicles half of the national fleet by 2030. Carmakers say they’re on board, planning to increase EVs from just 2% of sales this year to upward of 50% in just over nine years.

"We're really for the first time in 100 years changing the type of transportation that's going to be out there," said Mark Schienberg, president of the Greater New York Automobile Dealers Association, which operates the New York International Auto Show. The massive event, which had been scheduled for Aug. 20-29, was canceled earlier this month because of COVID, but Schienberg said the plan for an entire floor of EVs was only a signal of the greater momentum driving the industry. He remembers the days when his father taught him about changing oil and spark plugs — all of which is going away, he said. "It's quite an amazing time."

From a public policy perspective, the driving factor for the aggressive push is more urgent: converting to electric cars can have a bigger impact on greenhouse gas emissions and pollution than tackling soot-belching power plants.

On Long Island and across the state, cars, buses, trucks and other combustion engines contribute about 40% of the emissions. That compares with just 15% from fossil-fueled power plants, which on Long Island are being used considerably less in recent years and are actually burning cleaner than they did a decade ago, said Tom Falcone, chief executive of LIPA, who himself became a recent convert to EVs. (Heating buildings account for 20% to 25% of emissions, according to LIPA.)

For years, much of the focus on lowering emissions has been on the power-generation sector. LIPA and New York State are in the midst of a multibillion dollar transition that will essentially end greenhouse gas emissions from power plants by 2040. Older plants that burn natural gas and fuel oil will be replaced with hundreds of wind turbines the size of the Chrysler Building in the waters around Long Island’s South Shore, along with lots more solar power.

Long Island already has an edge on the electric vehicle front, with around 23,000 EVs on the road in Nassau and Suffolk as of the end of July, a higher percentage than the rest of the state, which has a total of around 79,000, according to a state database. More than 29,000 of those cars are Teslas. Still, EVs make up only around 2% of Long Island's nearly 2 million cars, said PSEG's Voltz.

Over the next four years, the utility wants to increase that Long Island number nearly eightfold, to 180,000, he said. The state Legislature this spring passed a bill that requires 100% of in-state new passenger cars and trucks sales be zero-emission by 2035, according to Assemb. Steve Englebright (D-Setauket), who sponsored the bill. And by 2035, according to one LIPA study, the figure could be as high as 1.3 million.

To encourage faster charging at home while collecting data on EV charging trends, PSEG is offering homeowners a Smart Charger rebate of $500 off the cost of a Level 2 charger. Level 2 chargers with 240-volt service need to be specially installed. One unit offered in the PSEG program costs about $700 before the rebate, and about $800-$1,000 to install.

The utility also offers a 5-cents-a-kilowatt-hour rate discount to customers who sign up for a special program using qualified chargers, which collect data on customer usage to determine charging trends for future expansion. It’s only available for specially approved chargers, and doesn’t work with Tesla chargers.

Making sure there are enough public chargers available in the region to reduce range anxiety is one thing. Making sure the underlying grid is prepared for a potentially large increase in home and public charging is another. And that entails making sure the equipment that brings power to households is ready to handle the load.

"We know that whenever you're making an energy switch like this there's going to be some investment that's required," said LIPA's Falcone, who described the grid upgrade as largely a block-by-block retrofit of distribution infrastructure. He thinks the transition might happen more quickly, just based on the benefits of owning an EV.

LIPA says the grid can handle the relatively low penetration of EVs for at least the next half decade, but Falcone said grid upgrades will be needed over the decade and beyond, when perhaps the majority of homes on a street have EVs and many are charging at once. It can be the equivalent of adding several homes on that street, factors that LIPA and PSEG monitor when adding capacity. The utility’s job is to right-size the transformers — the bucket-like devices that hang from local utility poles and regulate the amount of power that pulses through a neighborhood — and perform other upgrades to fit usage, Falcone said.

No oil changes and 'fun to drive'

"I don't have to go to the gas station, I don't have to maintain the car," as it doesn't need oil changes and brake wear is considerably less, he said. "It costs less, it's good for the environment ... and it's fun to drive. It handles like a BMW, it's as fast as a Porsche, and it has seven seats and I put my little kids in it. That's a pretty good package." He owns a Tesla Y model, the federal tax credit for which recently ended.

Falcone said it costs about $11 in electricity to charge an EV versus the $40 he spent to fill his Subaru with gas. Electric vehicle chargers increase power usage to an average household by 25% or 30%, so expect your bill to go up proportionately, he said.

In terms of the grid, that’s not a problem when one or two homes on a block charge their vehicles at the same time; but it can be if 15 of 20 homes served by a transformer do so during summertime peak. (Overloaded circuits can cause transformers to overheat and fail.) He predicted that over time, particularly if EV adoption is faster than predicted, it could mean changing out most of the existing transformer network.

In a 2018 study, LIPA predicted that the annual cost to upgrade transformers to make sure the local distribution grid could handle all that charging could reach up to $30 million a year. And the study found that the need for those upgrades would begin by about 2028.

By then, the study found, electric vehicles would begin to have a "significant" impact on system consumption. In addition to the need to upgrade transformers, the study recommended additional "smart-grid integration" to help balance out that higher level consumption. While each $35 million in LIPA spending adds around 1% to customer bills, the study found the increased costs are still a benefit for customers because the utility will be using more of the available power it contracts for, helping offset the upgrade costs by maximizing its resources, while giving EV owners a lower transportation bill compared with gasoline cars. A study by MIT found that EVs are both cheaper to operate and maintain.

LIPA's study projected the Long Island territory had a medium but "achievable" growth scenario of close to 700,000 electric vehicles on the road by 2035.

"Vehicle electrification increases utility revenue [and] could save ratepayers money," the report said, while reducing operating expenses for EV drivers and reducing emissions, which had tangible health benefits. The net economic benefits of upgrading transformers to make sure there’s enough capacity on local streets and business districts could "exceed proposed costs," the study found.

The need to make system upgrades will occur once adoption hits around 6% on Long Island, the study said. Less than 2% of Long Islanders have electric vehicles.

Rate-discount programs that seek to better manage when electric vehicle owners charge their cars will be key to managing system impacts between now and 2025, said PSEG's Voltz. The programs would offer incentives to charge at specific times during the overnight period to reduce overloads.

That's not a problem for environmentally conscious ratepayers like Kenny, who noted the benefits of owning his EV increase exponentially given his home solar panels, which send much of their excess kilowatt-hours to recharging his Leaf and generally reduce his fueling costs to zero.

"All our transportation [power] is coming from the sun," he said. "It’s a good feeling."