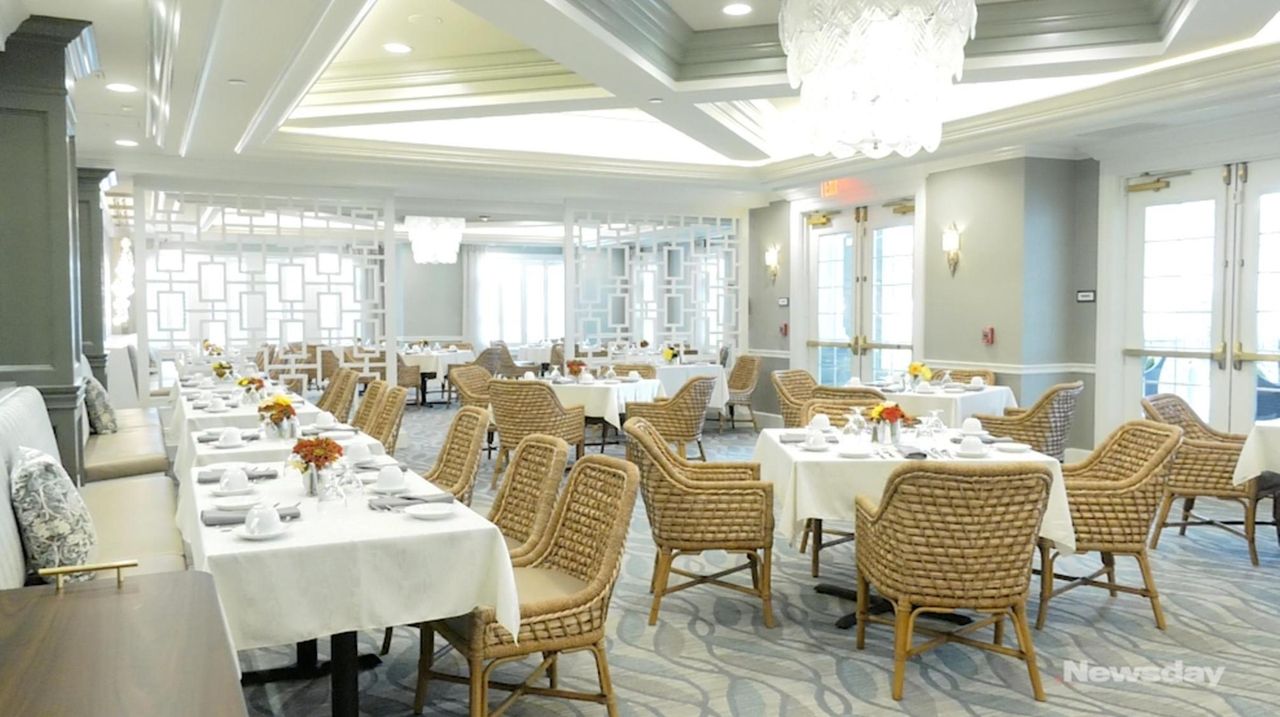 When Marlene Padover saw a new apartment complex for seniors in Jericho called Encore Luxury Living, she knew it was the place for her.

With daily activities such as a book club and meditation classes, a fitness center with Peloton bikes and a golf simulator in an oak-paneled room, Encore offers plenty to do.

“I love the activities, I'm a physical person, so I like to work out,” said Padover, 85, a retired psychotherapist and great-grandmother who had spent 25 years in a spacious home in Boca Raton, Florida. She briefly lived at a different place, she said, but “when I saw this and all it had to offer, I decided to make a switch.”

To be sure, life at the high-end facility does not come cheap. Rents at the 55-and-over complex, which held  a ribbon-cutting Thursday, range from $8,400 for a one-bedroom to $9,500 for a two-bedroom and $13,500 for the complex’s only three-bedroom residence.

The fees include daily breakfast and either lunch or dinner, along with daily housekeeping, concierge service and rides in a Mercedes to local destinations, among other services. The complex has a full bar along with two restaurants that offer entrées such as filet mignon with a wild mushroom-port sauce, Norwegian salmon or lobster tails. It also has a yoga studio, 29-seat cinema, salon and spa, along with an outdoor pool, fire pit, bocce court and putting green.

Encore is one of several new complexes on the Island where rents rival New York City prices. A three-bedroom apartment in Roslyn is listed for more than $20,000, and a two-bedroom apartment in North Hills is asking $9,500. At a newly built rental complex in Westbury, two-bedrooms have been listed for $7,050. Some facilities, including Encore, offer short-term, furnished rentals for snowbirds and those doing home renovations.

Homeowners in the Gold Coast communities of Nassau County can easily pay property taxes of $50,000 to $200,000 a year, Burman said. Plus, there’s the cost of utilities, insurance and services, he said.

“When they come here and they have to pay $100,000 a year and it includes their meals, utilities, and a car service and all the things that we give them, it's actually a bargain,” he said. “And they have a better lifestyle because they make new friends. ... Everything's taken care of for them, so they’re living in a hotel with a full apartment.”

Such communities appeal to affluent Long Islanders who would like to shed the burdens of homeownership but remain in the region, said Mitch Pally, chief executive at the Long Island Builders Institute, a trade group in Islandia. "There’s a demographic on Long Island that wants that high-end rental lifestyle," Pally said. “I think that market is going to get even stronger in the years ahead.”

For local residents with moderate or low incomes, though, there are not enough rental apartments, he said. Pally said Long Island needs at least 50,000 more rentals, but there are about 2,000 under construction or in the permitting stages, plus another 2,000 or so proposed for the next three to four years. "The pipeline is clearly not enough to meet the current needs," he said.

Certainly, the rates at Encore are not the norm for the region. Throughout Long Island, the average rent was $2,367 in the third quarter, up 17% from five years earlier, according to RealPage, a software and data company based in Richardson, Texas. The apartment vacancy rate was 2.7%, the company reported. "With very few vacant units and very little new apartment product to compete with, operators have been able to push rents up 3% to 4% a year," said Adam Couch, a market analyst at RealPage.

For some Long Islanders accustomed to the high cost of homeownership, life in a luxury rental complex is worth the price.

“You have to take into consideration what's included in your rent, and there's a lot here,” said Padover, whose four sons urged her to move to the New York area to be closer to family after her husband died. It wasn’t hard to move into a smaller living space, since she had used only a small portion of her 6,500-square-foot home, she said. Plus, she said, “I like the social aspect of it.”

Among Padover’s new friends is Lorraine Sossin, 88, the first resident to move into the 100-unit complex last month. For now, five of the units have been rented, with 10 more leases expected to be signed soon.

“It’s almost a piece of heaven, truly,” said Sossin, who had previously lived at a senior community in Roslyn Harbor. Sossin said she expects to use Encore’s ride service to the Ronald McDonald House in New Hyde Park, where she volunteers, baking treats such as cookies and banana bread.

Arlene Katz, 85, said she had grown weary of maintaining her home in a gated community in Jericho and was “really anxious to get into a situation where you’re relieved of all those responsibilities.”

Marilyn Benner, 78, a retired teacher, moved from a single-family home in Plainview after her husband died. Benner, who has osteoporosis and uses a cane, said it had become difficult to navigate stairs and lug a vacuum cleaner.

Now, she said, “Everything is wonderful and done for you. It’s like all of a sudden you’re the princess or the queen.”

The four women meet up for dinners with each other and their visiting children and grandchildren. “If I didn’t see one of these ladies where they’re supposed to be, I would check on them,” said Padover, who moved in this month. “We’ve become friends, and I think we’re getting attached to each other. And I'm hoping with many more people moving in, which I'm sure they will be, that I will meet many more people.”