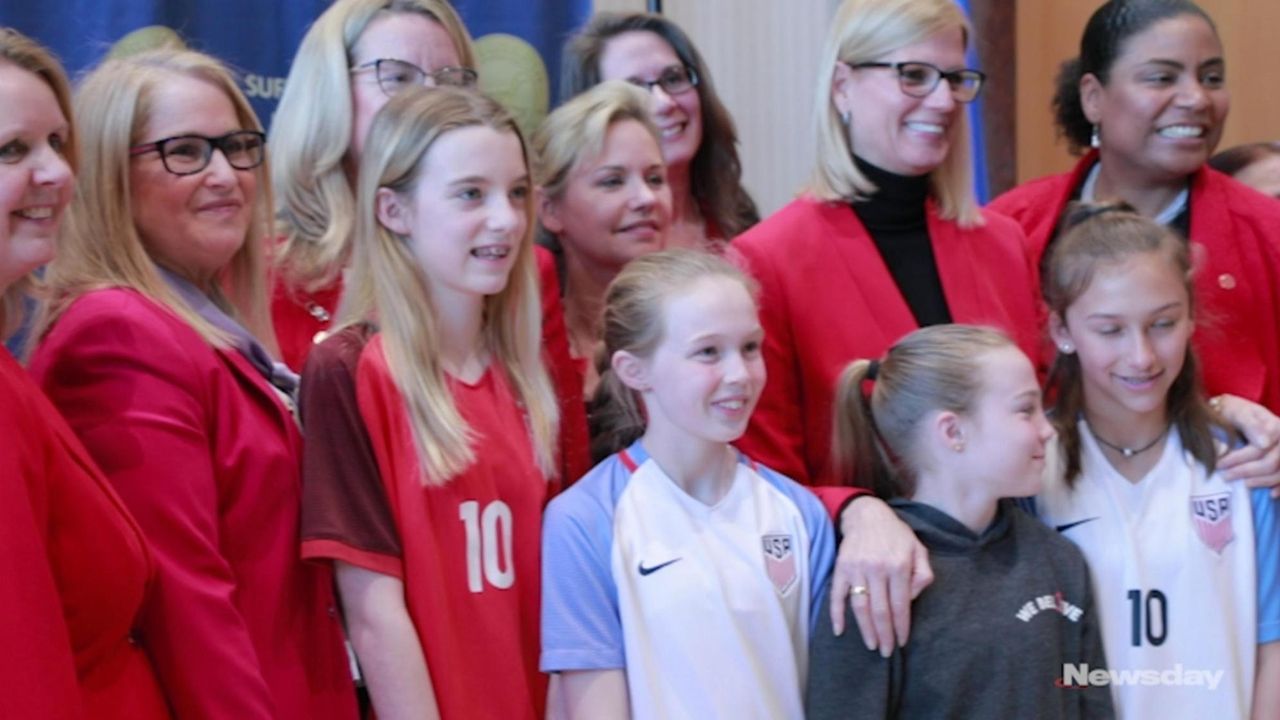 Female workers on Long Island are paid 80 cents for every $1 earned by their male counterparts, a pay gap that local and state leaders on Tuesday vowed to end.

The local group chose Equal Pay Day, which symbolizes how far into the new year women need to work to make what men did in the previous year, to appeal to the public to sign a petition endorsing the women's soccer team's lawsuit.

Suffolk Legis. Kara Hahn (D-Setauket), the majority leader, said Tuesday that the lawsuit by the women’s soccer team “presents an important teachable moment for our children about gender disparity and the ongoing fight for women’s equal rights.”

She said she and her two daughters, all soccer players, are dismayed that the women’s soccer team is paid less than the men’s team despite having a far better record.

Hahn said she wrote to U.S. Soccer Federation president Carlos Cordeiro on Monday to protest the pay inequity. She also started the petition on change.org and hopes to gather 75,000 signatures before the FIFA Women’s World Cup competition begins in France on June 7.

Hahn’s 12-year-old daughter, Hope, who plays on a traveling soccer team, said she wants to play at the college and international levels someday.

“It would be very disappointing to work just as hard, commit just as much, practice just as long and sacrifice equally — only to be paid less and promoted less just because we are girls,” she told more than two dozen people gathered at the Suffolk County Legislature. “There should be equal pay for equal play.”

Peyton Phillips, 12, of East Setauket, said the male coach of her girls’ lacrosse team is paid less than the coach of the boys’ lacrosse team. “I don’t think it’s fair,” she said. “He works just as hard.”

Most of the women at the news conference wore red “to symbolize that women are 'in the red' in terms of pay,” said Colleen Merlo, chair of the advocacy group Gender Equity Coalition. “This issue is not just a women’s issue; it affects children and families because women are the primary earners in 40 percent of households with children," she said.

Critics of Equal Pay Day events said they ignore the progress women have made since 1980 in closing the earnings gap with men.

"The gender pay gap is shrinking because women are making different educational and career choices," said Merrill Matthews of the conservative think tank Institute for Policy Innovation in Irving, Texas. "The left ignores those changes because it needs victims, not success stories."