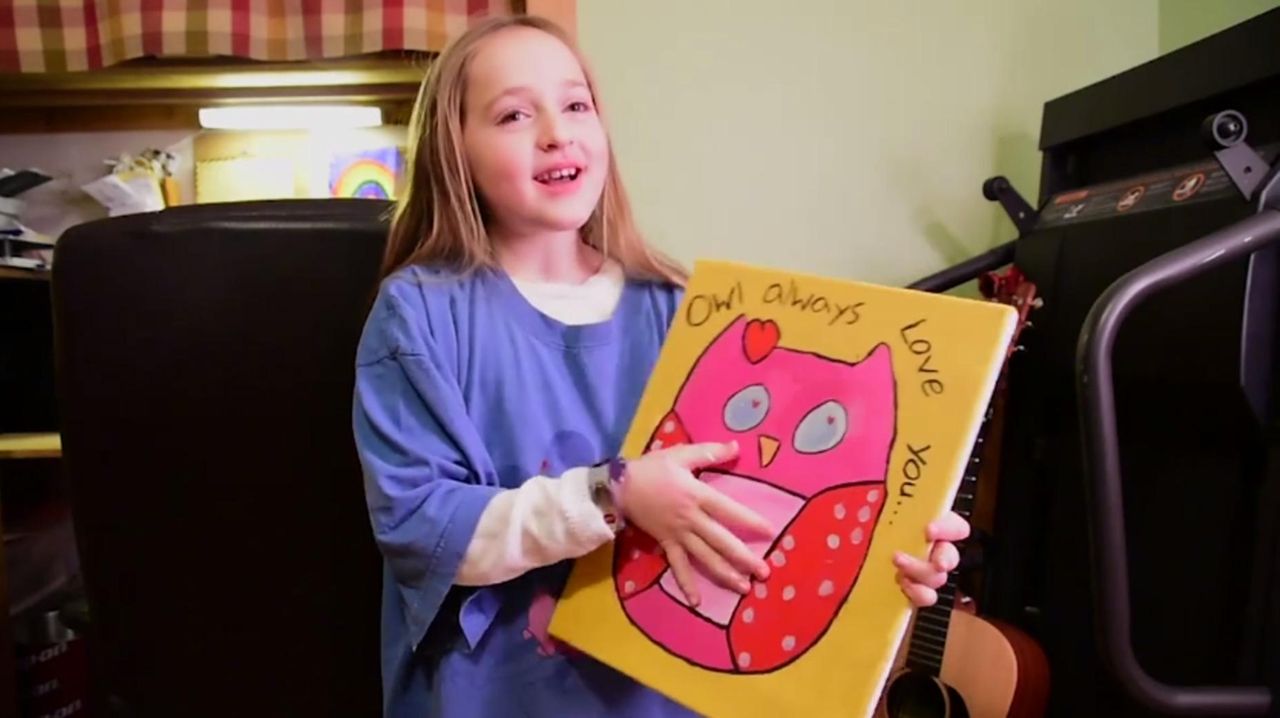 Emma Brussell, 8, of Farmingdale, who has Type 1 diabetes, is creating and selling paintings so she can buy a diabetes alert dog, which costs $15,000. Her parents are using a Facebook page as an auction site for buyers to bid on her works. Credit: Newsday / Thomas A. Ferrara

Eight-year-old Emma Brussell, who has Type 1 diabetes, was undeterred when Santa did not deliver the $15,000 diabetic alert dog that she wanted for Christmas.

Emma, an effervescent, bright-eyed Farmingdale resident, said she talked with her mom, Kelly Lynn Holmes, about ways to save up for a dog. “Then I thought, ‘I’m good at paintings,’ ” she said. “Why don’t I sell them?’ ”

The dogs — trained to use their sense of smell to detect low or high blood sugar levels, and then alert owners — cost $10,000 to $25,000, according to several organizations that provide them.

Holmes said she initially thought, “Aw, this is cute,” before she realized, “she was really going to do this.”

About a month ago, Holmes opened “Emma’s Journey,” a private Facebook group where she shared her daughter’s story with family and friends, and posted her artwork for sale.

So far, she has sold seven paintings and raised about $2,000.

Brittany Borneman, 22, of Wantagh, a relative, bought “A Pair of Penguins” for $750, with contributions from her mom, dad and brother, Borneman said.

“I think Emma could grow up to be a great businesswoman,” Borneman said. “I’m blown away by her determination to achieve her goal. . . . She definitely deserves this dog and I think it will benefit her in more ways than expected.”

Type 1 diabetes is an autoimmune disease in which a person’s pancreas stops producing insulin, a hormone people need to get energy from food. Its onset, in children and adults, has nothing to do with diet or lifestyle.

Continuous glucose monitors, small wearable devices that track glucose levels, are key alert systems for people with Type 1 diabetes, and Emma has one.

“I’ve had times when the sensor will say her blood sugar levels were low and I’d run to the kitchen to grab a juice . . . and the next thing I know there’s either three question marks on the screen or it says that her levels are actually high,” she said.

And on Christmas morning Emma’s monitor did not alert her that her sugar levels were low until after her mother, who had noticed something was wrong, was already treating her.

Diabetic alert dogs can provide warnings 15 to 30 minutes before problems show up in the blood, said Breanne Peeples, owner and dog trainer at the National Institute of Diabetic Alert Dogs in California. “They have 220 million scent receptors and can sense when something is off very quickly by smelling a person’s body secretions, including saliva, sweat and breath.”

“When we train our dogs to do scent work we teach them by having them smell saliva samples from our clients on cotton balls,” she said.

Rita Foster, 53, of St. James, got her 14-year-old daughter, Paula, who has Type 1 diabetes, a diabetic alert dog six years ago. She said Cooker, a male golden retriever, was invaluable.

“Cooker was there to protect her and signal her highs and lows and he helped her every step of the way, but to be honest, he helped me too,” she said. “He helped me feel more at ease and when she was low at night, there were many times he would nudge me and jump on the bed and stand over me until I’d get up.” Cooker died in May.

Holmes hopes a dog would give her daughter “that extra layer of protection.”

Emma agrees. “I would take him to school and I wouldn’t be petting him or saying ‘Good boy.’ I’d be concentrating on my math and if he paws me then it means I need to check something,” she said.

Holmes has received a slew of Facebook messages from people, “some total strangers,” asking for digital prints and requesting an address where they can send donations to. Some people have even urged the family to set up a GoFundMe account.

“But that’s not what it’s about. Emma really wants to earn this,” Holmes said. “And I’m just so grateful about the response her paintings have gotten.”

Emma says she’s putting the finishing touches on an orange and yellow painting of a goldfish.