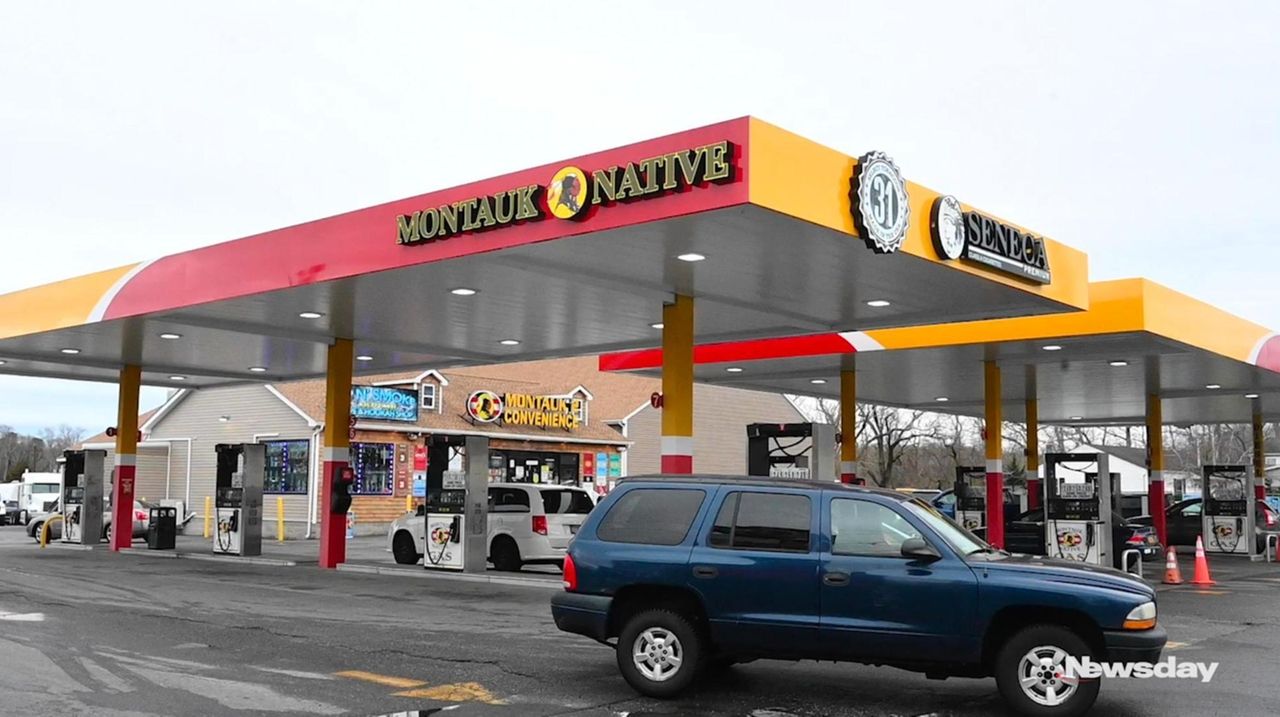 The Unkechaug Indian Nation on Monday moved to evict the operators of a discount gas station on the Poopspatuck reservation in Mastic but the station’s owners say they plan to fight the order and continue operations. Credit: Newsday / Mark Harrington; James Carbone

The Unkechaug Indian Nation on Monday moved to evict the operators of a discount gas station operating on the Poospatuck reservation in Mastic but the station’s owners say they plan to fight the order and continue operations.

Half a dozen Suffolk Police cars and tribal security were stationed at the Fast Gas/Smokes R Us station by midmorning after tribal chief Kenneth Harris issued a letter to the station’s primary owner, Danielle Treadwell, ordering her to vacate the discount gas station. Tribal security moved early Monday morning to enforce the order.

"The aim is to tear it down," said Harris, in an interview from his home, noting the property Treadwell claims to be hers was shown in court to belong to "another Treadwell. It doesn’t belong to her."

The station has been the subject of multiyear lawsuits involving Treadwell and the tribe, which has said she’s not the owner of the land on which the operation sits, and that its underground tanks could pose a hazard.

But Thomasina Mack, a former tribal leader speaking for her friend Treadwell at the station on Monday, said Fast Gas and Danielle Treadwell were the victims of "corruption" and an attempt to "monopolize" gas sales on the reservation. Gas prices are lower on the state-recognized Unkechaug land because the tribe is exempt from certain taxes.

"Kenneth Harris is trying to strong-arm Danielle Treadwell off her property so he can take over the gas station," leaving only one discount station, Montauk Native Gas, Mack said. "It’s not happening."

She said the eviction notice wasn’t valid because it had just Harris’ name on it.

"There’s a lot of corruption going on here," Mack said.

But Harris said a full tribal vote had found Treadwell, a tribal member, to be "undesirable," and a recent state appellate division ruling upheld the tribe's sovereign right to determine whether blood-right members can possess land, affording the tribe the right to begin the eviction.

Suffolk Police, Harris said, were preventing the tribe from following through on the eviction, for which it hired additional security officers. "The police said they have to stay neutral but at the same time are impeding us from government operations," by enforcing his order, Harris said. "Police are standing in the way of evicting them…They’re stopping us from taking back our land."

A Suffolk Police officer at the Fast Gas station called the issue "internal politics on the reservation. We’re just here to make sure everybody plays nice."

A Suffolk Police spokeswoman said cops "responded to a 911 call" to the scene early Monday and were at the scene "as a precaution." She declined to comment on Harris' charge that police were blocking the tribe from evicting Treadwell.

Mack said she personally walked a petition door-to-door at the Poospatuck reservation to affirm that Treadwell was not an "undesirable" person on the reservation, and that her petition outstripped the prior tribal vote.

David Besso, an attorney for Danielle Treadwell, last month said while the appellate-court ruling "did say the tribe didn’t give up sovereignty," it "ultimately didn’t say anything about" his client's claim to the land, which he argued she will continue to litigate to keep.

Besso at the time argued the tribe declared his client undesirable "under the wrong section of their bylaws," and that the nation "can’t take her property without due process. "But Unkechaug Nation outside attorney Kevin Schlosser in March said the court's ruling is clear. "Two courts ruled [Danielle Treadwell] cannot challenge the sovereign act of the nation," he said. "She can’t bring a lawsuit to challenge the vote of undesirability. That’s an act of sovereignty. New York courts can’t second guess that."

The March 23 letter to Treadwell from Harris cited a vote by the nation on Sept. 16 2019, declaring the undesirable status and barring her from entering the disputed land and operating any business on it. It ordered her to "immediately" remove herself and all personal property from the land, including gasoline, and to permanently shut down the Fast Gas station and Smokes R Us convenience store.