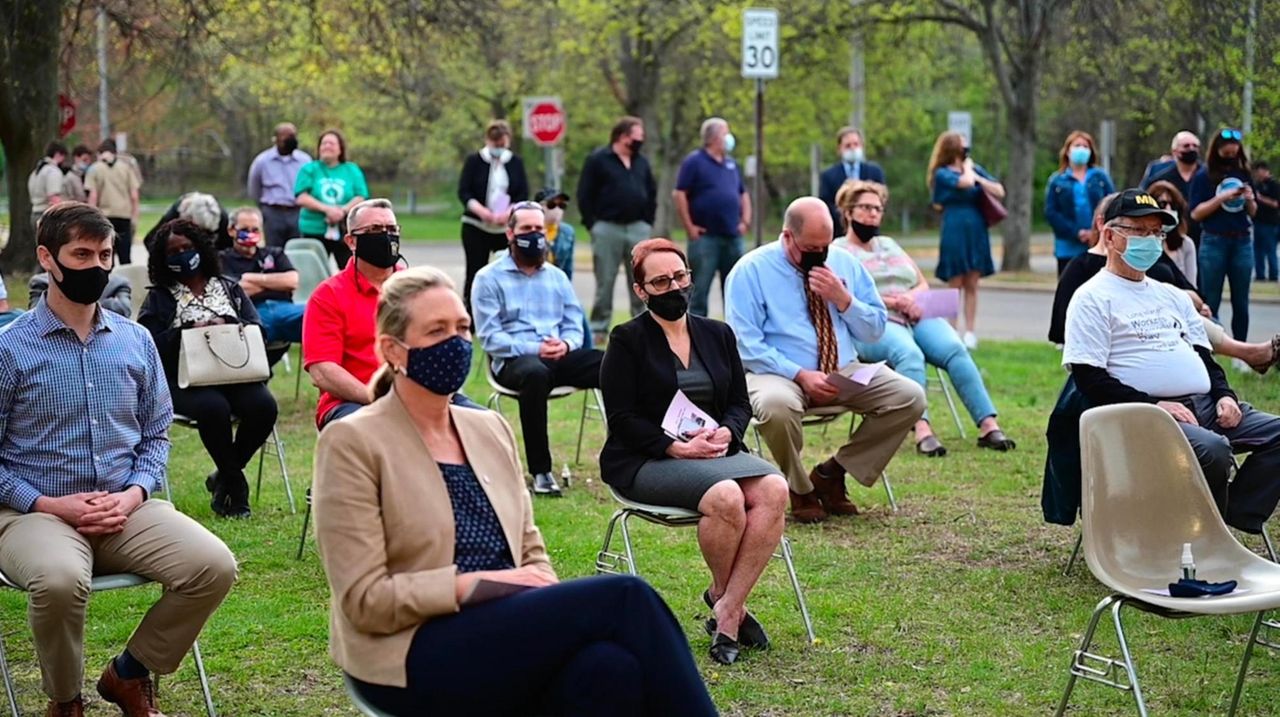 A ceremony honoring workers who died this past year, the Long Island Workers Annual Memorial Day Service, was held Wednesday in Hauppauge by the Long Island Federation of Labor. Credit: Newsday / Thomas A. Ferrara

For Bello Lamadieu, who works at two nursing homes in Nassau County, the memories are fresh of his fellow respiratory therapists who died last year after contracting the coronavirus while caring for patients.

He said some of the therapists might still be alive if their employers had done more to make the workplace safe, including greater access to masks and other personal protective equipment.

"I lost many friends from this disease," said Lamadieu, 67, of Valley Stream. "I’d like to acknowledge all my co-workers who have lost their life, their job … God bless," he said Wednesday.

Lamadieu spoke at the annual Long Island Workers’ Memorial Day Service outside the state office building in Hauppauge. He said he’s helping Local 1199 of the Service Employees International Union organize respiratory therapists at Townhouse Center for Rehabilitation and Nursing in Uniondale, where he works full time.

As Lamadieu spoke about losing co-workers to COVID-19, many in the crowd of about 80 politicians, union leaders and workers nodded in recognition. The virus took center stage at the hourlong ceremony, which included a list of nearly 60 union members who succumbed to the disease — many of them front line workers for supermarkets and other retailers, governments and mass transit agencies.

Roger Clayman, executive director of the Long Island Federation of Labor, an umbrella group of local unions, said the pandemic revealed serious "weaknesses" in federal workplace safety regulations and the importance of employees being able to raise concerns to their employer without retribution because of union membership.

"Many of our fellow workers got sick and unfortunately, many died," Clayman said. "You can see their names in the program but there are many others that haven’t been listed yet, including health care workers."

Clayman said President Joe Biden’s proposals to stop employers from interfering with union organizing drives must be adopted by Congress.

Suffolk County Executive Steve Bellone agreed, saying he will work with local unions to get the federal legislation passed. He said essential workers should be honored "with a commitment to make sure that they are able to work in safe environments."

During the ceremony, candles were lit for COVID-19 victims and two on-the-job fatalities not related to the virus.

Jerry Laricchiuta, regional president of the Civil Service Employees Association, spoke about Anthony Cardillo, 21, who was killed in a March 2020 single-vehicle crash while on duty as an Oyster Bay Town public safety officer. Cardillo also was a public safety officer for the Farmingdale school district and was working a double shift when the crash occurred, according to Laricchiuta.

Jonathan B. Kehoe, 59, a Lindenhurst village employee, was killed a year ago while volunteering to help pick up trash during the pandemic. He lost his footing on the garbage truck and it backed over him.

"We did lose a lot of great workers from COVID and just as sad is the loss of these public workers who were doing their jobs on behalf of the public," Laricchiuta said.