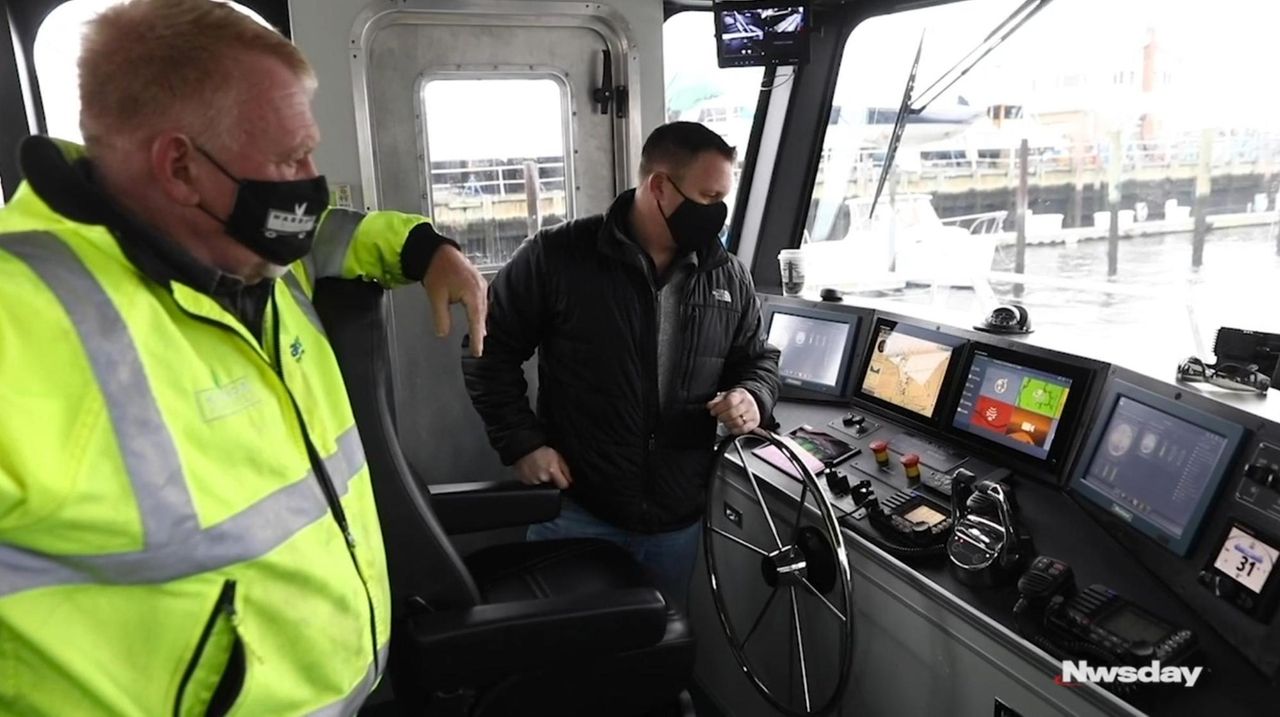 The boat that supplies Harbor Harvest market in Halesite is hybrid-powered and safer for the environment. It is also getting a remote-control navigation upgrade. Credit: Newsday / Chris Ware

Since opening a year ago, the Harbor Harvest market on the waterfront in Halesite has been stocked by a hybrid-powered catamaran traveling across Long Island Sound from Connecticut.

Now that vessel, the Captain Ben Moore, is being retrofitted with a remote-control system that will make it the first-known autonomously operated cargo vessel in the United States, officials said.

The boat, the market on Huntington Harbor and a four-year-old food store of the same name in Connecticut are all owned by First Harvest Navigation of Norwalk, a company that prides itself on being cutting-edge environmentally and technologically. So last month it began installing the $100,000 SM300 remote-helm control system from Boston-based Sea Machines Robotics that allows the vessel to be operated with no crew aboard.

But First Harvest plans to keep its crew in place as it carries fresh produce and other food items— and sometimes passengers — across the Sound and moves cargo from other customers to and from other destinations. Company president Bob Kunkel said that after concluding discussions with the Coast Guard over vessel safety and computer security to prevent hacking, the rest of the software and hardware will be installed, probably by February, and then testing can begin on the Sound. He hopes to have the control system on the 65-foot aluminum catamaran in full operation by spring.

Kunkel said trucking the food products from Connecticut to Long Island would be more than an eight-hour round trip, while the catamaran reaches Huntington in about 40 minutes.

The Sea Machines system allows remote-control operation from shore or another vessel via the internet and includes obstruction-detection and collision-avoidance technology.

There is growing interest in maritime autonomous control systems just as there is for vehicles on land.

"Everybody wants to talk about removing the crew," Kunkel said. "We don’t think that’s where the value of the autonomy can come. We don’t have any intention at this time of removing crew. We think we can provide safer navigation. We have a captain and two deckhands, and the captain could come back and get the cargo ready for discharge rather than just being glued to the pilot seat as the boat is going back and forth. It would be a pilot program to see how we could operate the vessel more efficiently. It’s not going to be operated like a drone."

The Massachusetts Maritime Academy graduate who has worked as a merchant marine chief engineer said he’s been on other non-cargo carrying vessels equipped with the system and the captains have enough confidence in it that they can take their eyes off the view out the windshield for 20 minutes without sacrificing safety.

But there’s still some fine-tuning necessary in the system’s detection and analysis of obstructions ahead of the vessel, Kunkel said. "It has the ability to notice that there is an obstruction ahead" and warn the operator. But "it has to develop some more recognition."

A documentary, "The Last Line," is being made about the project, Kunkel said.

The Captain Ben Moore, which has two diesel generators to charge the banks of lithium batteries that power its two electric motors, is currently running from Norwalk to Huntington once or twice a week since business has slowed due to COVID-19, curbing the demand from Long Island restaurants for fresh fish. Kunkel said the vessel operation was profitable before the virus struck.

He declined to provide revenue figures, saying that the virus has so buffeted his business that they have fluctuated widely. He said he charges 55 cents per pound of cargo carried. "At 25% of capacity we pay our costs. At 50% we generate $5,500 a day and at 85% $9,350. He said the company is trying to "build capacity which would take a solid 24 months in a normal world. A pandemic world has thrown us a lot of curveballs."

"We have some good contracts with a lot of food moving on the boat and we have a lot of passenger interest also from people interested in going between the two points," he said. "I think it will grow."

Besides transporting food from Norwalk to the Huntington store, the company moves produce from a farm in New Jersey and makes deliveries as far out as Montauk, Kunkel said. The company recently signed a contract with a bourbon distillery in Connecticut to carry its product to the East End. The boat can carry 50 passengers, and in the summer has carried passengers on daytrips back and forth between Long Island and Connecticut. "That’s been pretty successful," he said.