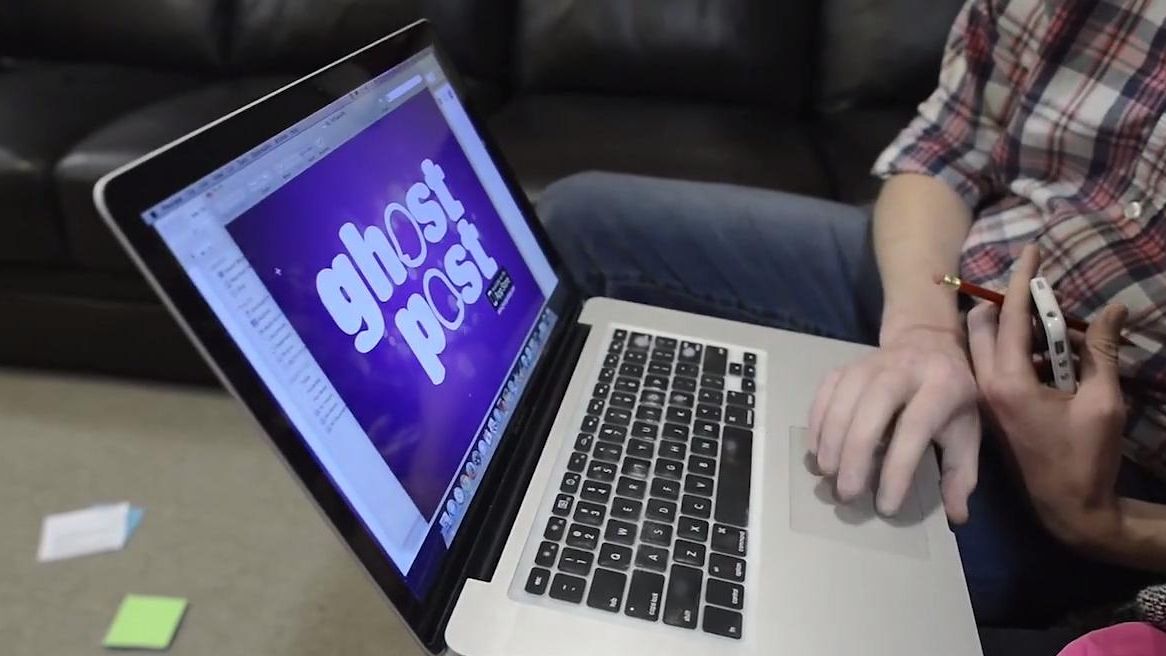 Brother and sister team Edward McLaughlin and Tara Jaworski talk about what they learned about designing an app and the competition for their good idea that allows iOS users to post messages anonymously. (Credit: Johnny Milano)

When Edward McLaughlin and Tara Jaworski began work on a mobile app called GhostPost two years ago, the brother and sister team said they never imagined the idea would end up in the hands of other software developers.

Early on, the pair faced a dilemma common to startups: To generate interest in GhostPost and find help to turn it into reality, they had to share the idea, while at the same time fighting to protect their intellectual property.

GhostPost, a free iPhone app launched in July, allows users to anonymously share messages and images with groups of friends. McLaughlin, 28, said the idea came to him in January 2013 while vacationing with friends in Florida.

"The business side of me said this is an idea worth going for," said McLaughlin, a medical student at the time with no experience in tech startups. The app is meant to provide friends a place where they can speak freely to each other without attribution, making the experience more of a fun guessing game.

Following the advice of a friend, in late January 2013 he called the head of a San Francisco-based app development firm to see if that firm would help him develop the app. After a noncommital response, McLaughlin -- now a resident at Mount Sinai Hospital -- decided to pursue the concept anyway, enlisting the aid of his older sister, an IT program manager for a large health insurer.

The idea "hit a nerve with me," said Jaworski, 32. "I couldn't shake the idea that this could be game changing."

The siblings quickly went to work on the app, often finding themselves discussing branding or user interface late into the night in the basement of their parents' home in Bayport. Since neither were coders, they enlisted the aid of two developers who worked in return for future equity.

But just a few weeks later, in early March of 2013, they were dealt a major blow -- someone else was making their product.

"It was almost the worst-case scenario," McLaughlin said, describing the frustration and confusion he felt after hearing the news.

McLaughlin said he found out the same woman he had told his idea to in January was part of a team working on developing an anonymous chat app as part of StartupBus, a weeklong hacking competition held at South by Southwest, a music, film and media festival in Austin, Texas. The name of the app was GhostPost.

After contacting the woman, McLaughlin learned the San Francisco team was well into development on its version of the app. According to a Facebook message exchange with the developer he provided, she said, "You guys told me on the phone that I should build the app and that's what we're doing."

She added: "I had no idea you were actually trying to make it as a product until sometime yesterday (long after we already had most of the product built). The product is extremely morphed from your original idea . . . " She wrote that his best recourse was to "relax and be excited that an amazing team is building out something you think would be fun."

She did not respond to requests to comment for this article.

Jaworski filed for a provisional patent and trademark protection for GhostPost within 24 hours of the exchange. The siblings also sent a cease-and-desist letter to the organizers of the StartupBus competition. They considered taking the matter to court, but said they feared the resources necessary would only distract from their goal to find investors. To date, each has invested more than $10,000 into the business, and they are still looking for outside investors.

Elias Bizannes, founder of StartupBus, said his impression when he received the letter was that the complaint was bogus. Having worked with both startups and venture capitalists in Silicon Valley since 2009, he said he's seen many false claims in the past.

"This is a topic that tends to unfortunately come up quite often," especially in the "brutal" business landscape of Silicon Valley's matured startup market, Bizannes said. Without any sort of written agreement, "nothing illegal was done," he said.

Filing for patent and trademark protection was the right move for McLaughlin and Jaworski, even if it came a little late, said patent attorney David Aker, an adjunct professor at Touro College law center in Central Islip and of counsel to Ohlandt Greeley Ruggiero & Perle LLP in Stamford, Connecticut. Provisional patents, or "patents on the installment plan," as he calls them, offer inventors some protection for ideas that haven't been fully developed or prototyped. Because attorney fees can be high for a full-blown patent application, provisionals can be an affordable intermediate step.

Another good way to protect intellectual property early on, said Aker, is to require potential business partners and even investors to sign nondisclosure agreements before discussing unpatented inventions.

"There is a desire, especially with the post-Internet age, to move these things along at lightning speed," said Aker. The rush to get ideas out there can sometimes have unintended consequences, he said.

"You have to be cautious and be smart," added Andrew S. Hazen, chief executive of LaunchPad, a co-working space for small businesses with three locations on Long Island.

As an investor in several startups, Hazen advises that those seeking investment keep a "buyer beware" mentality when sharing ideas. "You've got to protect your idea and surround yourself with people who can advise you accordingly," he said.

Ultimately, the first GhostPost disappeared shortly after the competition, but not before garnering some media coverage at the festival.

While Jaworski called the experience disheartening, she remains optimistic about attracting investment in the future and says the small company is better for the tough lesson learned early on.

"It really does show how strong and ruthless startups need to be in the early stages," she said.

While anonymity can make for fun interactions with friends, with it comes the risk of online bullying, said GhostPost founders Edward McLaughlin and Tara Jaworski.

Other apps such as Yik Yak, which allow users to post anonymous messages within a small geographic area, drew the ire of Long Island school officials last fall for facilitating violent threats and hurtful exchanges among peers.

Although GhostPost only works between designated groups of friends, its founders reached out to more than 2,000 high school principals nationwide, hoping to understand their concerns.

As a result, the app features a "Block It" function, which allows any group member to instantly remove any questionable or hurtful content from the chat. While no precaution will completely remove the threat of misuse, Jaworski said it's a step in the right direction.

"At this point, anonymity apps have a bad reputation and we want to be the anonymity app that gets it right," she said. -- Victor Ocasio

WHAT IT DOES: iPhone app that lets users share messages and images anonymously with friends