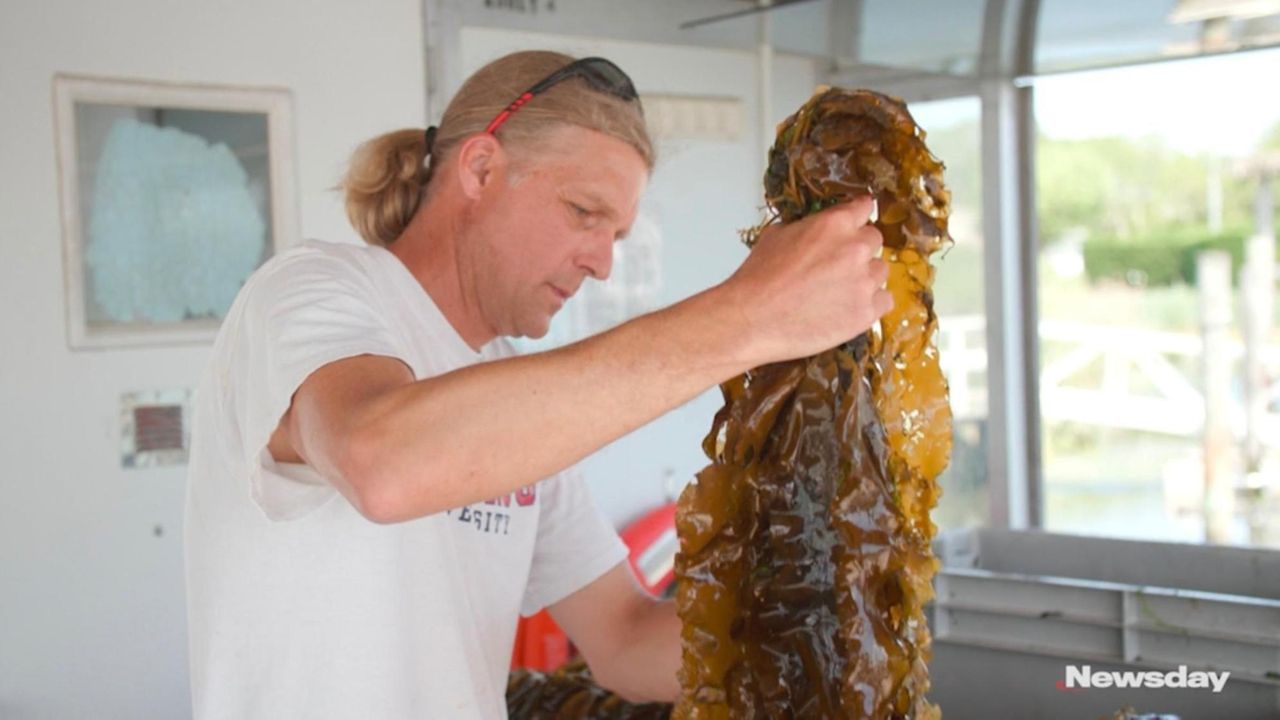 Kelp is being grown in shallow waters, such as places in Moriches Bay on an experimental basis by Stony Brook School of Marine and Atmospheric Science, to help remove nitrogen from Long Island bays and estuaries. Newsday’s Steve Langford has more. Credit: Kendall Rodriguez

Oyster farmers who helped cultivate experimental kelp beds this winter to study the seaweed’s role in nitrogen reduction will receive first-time payments billed as "nitrogen credits" for their 2021 harvest. Scientists want to advance the growing of kelp for fertilizer and to reduce harmful algae blooms.

At a presentation Thursday at Stony Brook University’s School of Marine Sciences, Christopher Gobler, a professor who operates Gobler Laboratory at the Southampton center, said the funding program would be New York’s first to offer nitrogen credit payments for kelp cultivation.

Kelp, which grows between December and May when boaters are largely off waterways, is an efficient consumer of nitrogen and carbon dioxide, and its use is becoming more widespread. Gobler said it can be an effective tool to reduce nitrogen as Suffolk awaits large-scale introduction of advanced septic systems in homes over the next 30 years. "We need solutions right now to protect water quality," he said.

The university lab has used grant money over the past three years to cultivate sugar kelp on 10 different oyster farms, producing 10,000 pounds of kelp while removing 36 pounds of nitrogen, Gobler said.

Under the program, kelp farmers, who may eventually produce more than 70,000 pounds of kelp on one-acre farms, could help extract 200 pounds of nitrogen from the waters, Gobler said, earning hundreds of dollars of credits during a season they are largely off the water.

Funding for the effort is being provided in partnership with the Peconic Bay Keeper, a conservation group. Its executive director, Peter Topping, said the group would spend thousands to fund it, through 2021 and perhaps beyond.

As reported in Newsday last month, this year’s kelp crop showed particular success in growing the winter seaweed in shallow waters, including in an oyster farm just a few hundred yards from land in Moriches Bay. Oyster farmers and lawmakers say they hope to develop a kelp market that will interest restaurants as a menu item, garden stores as fertilizer and even food manufacturers.

One important goal for wider-spread kelp cultivation around Long Island is passage of a bill pending in the State Legislature that would allow it to be grown on Suffolk County aquaculture leases in the Peconic and Gardiners bays. At present, commercial kelp cultivation is not allowed there, but is allowed in the Gobler lab pilot study.

Gobler said the lab has also made advances in the production of fertilizer from kelp, developing a product that has the "same nitrogen and phosphorus [content] as Miracle Gro," the popular garden fertilizer. "The next step is to scale up and make it commercially viable," he said, envisioning a day when "we won’t need to import synthetic fertilizers on Long Island."

The Southampton-based lab also has been studying the use of kelp to reduce harmful algal blooms, Gobler said. He and another scientist recently submitted a paper accepted by the peer-reviewed journal, Harmful Algae, showing that kelp can be used to "fight off the most toxic and dangerous harmful algal blooms in New York," Gobler said.

Peter Scully, deputy county executive for Suffolk County, said while advanced septic systems will eventually produce a path to large-scale nitrogen reduction in local bays and estuaries, kelp cultivation could be "one more tool in the arsenal" to combat nitrogen as those systems await deployment.