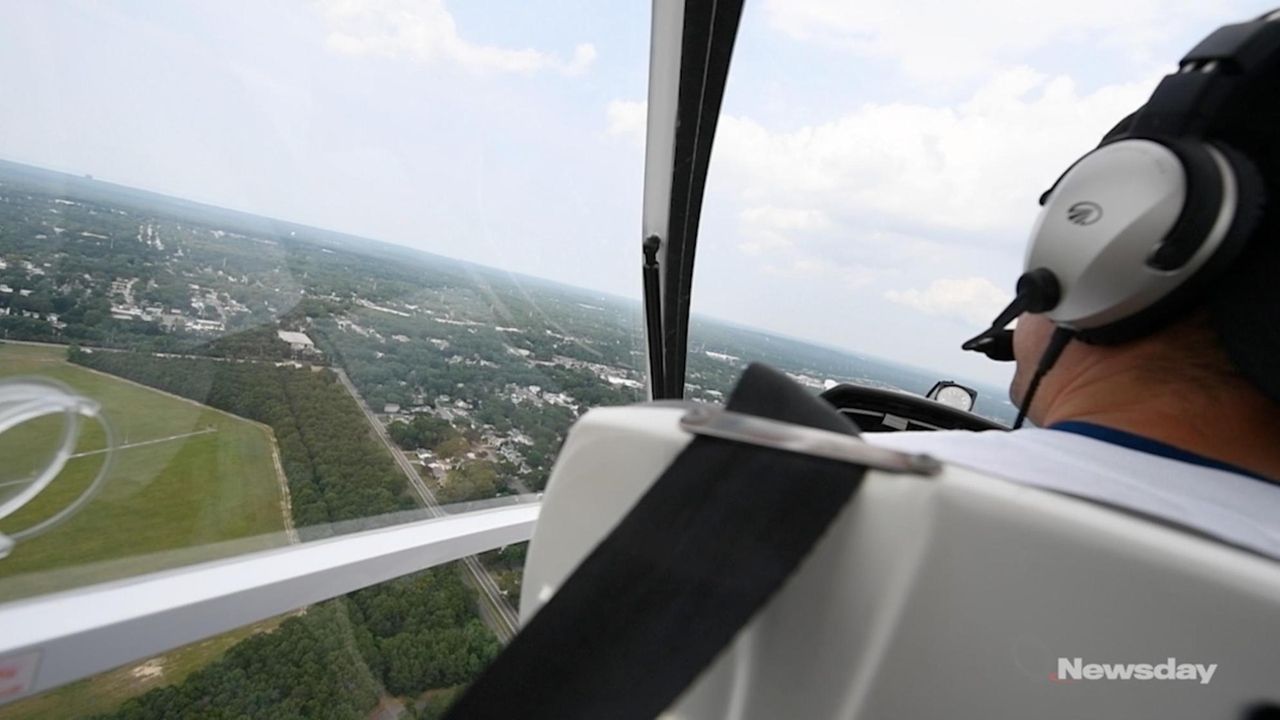 Long Island's first gyrocopter dealer, based in Ronkonkoma, is attempting to revolutionize the way people travel -- eliminating traffic and minimizing travel time between points A and B while maintaining safety and affordability.  Credit: Newsday / Steven Pfost

A startup at Long Island MacArthur Airport has launched the region's first dealership for gyroplanes, hybrid aircraft that can pirouette in midair and get 20 mpg on automotive gas.

Gyroplanes have a distinctive appearance, with a propeller typically mounted in the rear and a large rotor on top. What distinguishes a gyroplane is that the top rotor is not powered during flight, spinning freely and providing lift via the flow of air.

"These are popular in Europe, but not in the United States yet," she said. The closest known competing dealer on the East Coast is in Maryland.

Gyro Revolution is offering gyroplanes from European manufacturers and pilot training from Robert Lutz,  a certified flight instructor who is the company's co-founder and chief operations officer..

The latest generation of gyroplanes are "safe, innovative, modern and affordable," Lutz said.

On Wednesday, Lutz, 37, put a gyroplane through its paces at Long Island MacArthur Airport in Ronkonkoma, guiding the rotorcraft through balletic turns and cutting airspeed almost to zero to demonstrate how the top rotor can provide a gentle landing even if the engine fails.

Lutz said the aircraft-grade engines are much smaller and less noisy than those in helicopters, which have prompted complaints about noise from some Long Islanders.

Unlike helicopters, however, gyroplanes, which can fly as fast as 120 mph, require runways ranging from 250 feet to 1,000 feet long. Gyroplanes, which burn 3 to 5 gallons of fuel per hour, typically can travel from 300 to 500 miles.

Steinhardt said the bootstrap company is beginning to match aspiring gyroplane owners with aircraft in a time-sharing program that could cut ownership costs to a fraction.

Training for a sport pilot's certificate, the minimum required to operate a gyroplane, would cost about $5,500, Lutz said.

Steinhardt said the company, which opened its MacArthur site in April, is beginning to spread the gyroplane gospel in the aviation community and beyond.

"There are some people who have spoken to us about commuting" using the aircraft, Lutz said.

"This area is tricky because we have Kennedy [Airport]. We have LaGuardia. There's a lot of air activity around Long Island," he said. "There's quite a bit of knowledge [needed] if you're going to operate a manned aircraft or an unmanned aircraft in a congested area."

Josh Stoff, curator of the Cradle of Aviation Museum in Garden City, said that gyroplanes were not produced on Long Island during the region's manufacturing heyday, but related gyrodyne aircraft were.

Gyrodyne Company of America Inc. in St. James once produced the aircraft. Among the aircraft produced was an anti-submarine drone Gyrodyne built for the U.S. Navy that could be armed with torpedoes or a nuclear depth charge.