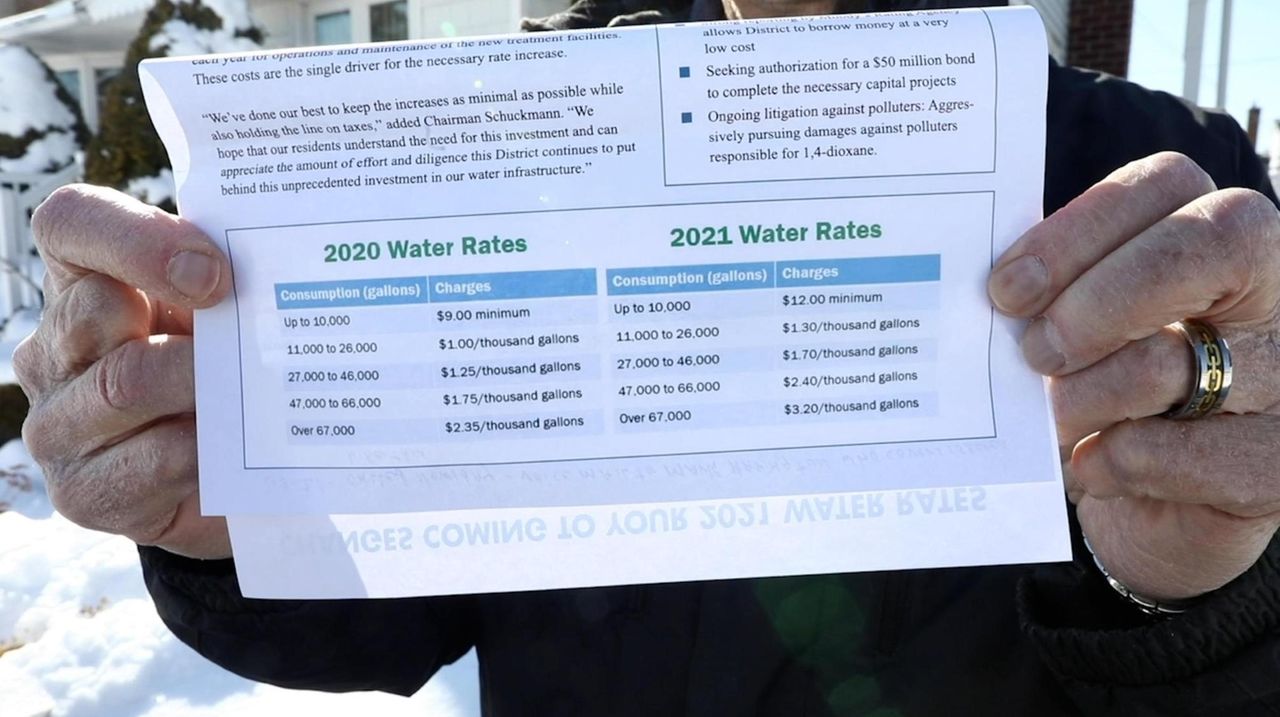 Joseph Wilkonski said his Hicksville Water District bill for the three months ending in January contained what seemed like an innocent mistake. On Wednesday, he said after weeks of wrangling with the water company, his math was correct, and not just for his bill: the district on Wednesday acknowledged a "billing error" that impacted more than 5,000 customers. Credit: Newsday / Chris Ware

Joseph Wilkonski didn’t need advanced math skills to determine his Hicksville Water District bill for the three months ending in January contained what seemed like an innocent mistake. After weeks of wrangling with the water company, the district on Wednesday acknowledged a "billing error" that impacted more than 5,600 customers.

Credits are on the way.

He understood a new rate plan kicked in Jan. 1, so less than a week of usage should been subject to the increase, he said.

He called the district and was at first told the utility would not prorate his bill to credit him for three months at the cheaper rate. He said a representative told him the difference amounted to only a few dollars, and to pay it.

A representative at the water company who would only give his name as Michael told Newsday on Tuesday that the Jan. 1 rate increase will pay for state requirements to treat the toxin 1,4 dioxane, and that no one in the district was prorated.

But after requests for interviews and comments this week, the district on Wednesday issued a statement from superintendent Paul Granger indicating Wilkonski was right.

"The district investigated the matter and found that a billing error has occurred impacting 5,638 customers," Granger said in the statement. "The district is working to remedy the error and residents that were improperly billed will be notified and will be receiving a credit on their next water bill."

For Wilkonski, who said he spent "an inordinate amount of time" on the phone arguing what he believed was a simple case to Hicksville Water District representatives, there was never any doubt about the math.

"I knew I was correct," he said Wednesday. "That's why I persisted in going forward with this. They told me to just pay the bill. I said, I refuse to do that."

Wilkonski said he elevated his complaints to the district treasurer, who he said told him the utility had "no way" of prorating his bill.

He even offered to prorate the bill himself and leave out the disputed amount, but was told he’d still be billed for the amount. "They want to make a terrific issue out of this when it could be resolved by a high school math student," he said.

Wilkonski said the water company’s final offer only made him more determined to fight.

One company representative told him, "You’re only talking about $2.30. Why don’t you just pay it and be done with it." Wilkonski's reply: "It’s the principle, my friend."

"Customer service and satisfaction are fundamental to the Hicksville Water District's operations," he said in his statement, "and it's why we take every customer concern seriously."