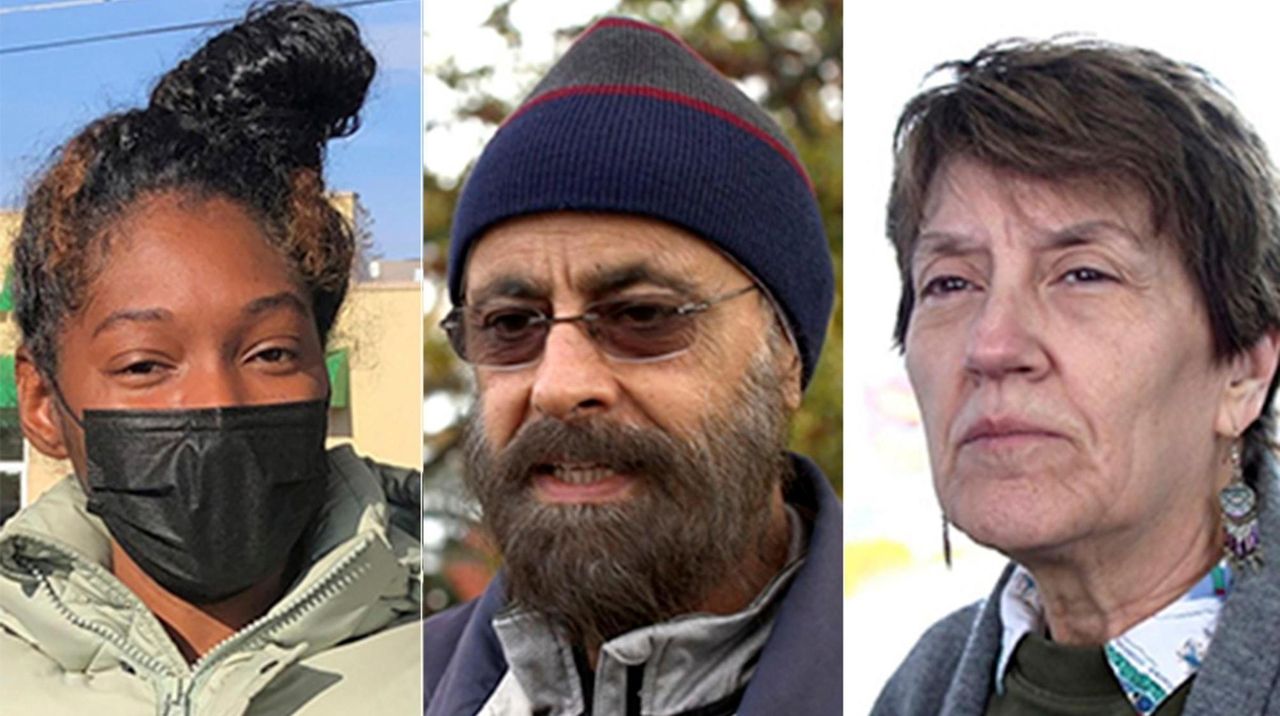 The inflation surge has impacted Long Islanders from pain at the pumps to the cost of groceries. Newsday's Cecilia Dowd reports. Credit: Howard Schnapp; Kendall Rodriguez

Joe Matz in Hicksville is picking up extra shifts. Soriah Gibson in Roosevelt is avoiding driving more than necessary. BJ Singh in East Meadow is trying to cut out nonessential purchases.

Long Islanders are taking steps to cushion themselves against a recent surge in inflation. Consumer prices rose 4.3% in October compared with a year ago in the 25-county region that includes Long Island as well as New York City and other parts of New York, New Jersey and Pennsylvania. The increase was the largest for the region since October 2008 when global financial markets crashed.

When excluding food and energy prices, which are more volatile than other goods, the region’s cost of living increased 2.8%. The region is faring better than the United States overall, which saw prices increase 6.2% in October — the sharpest spike since 1990 — compared with a year earlier.

Regional gasoline prices soared 49.5% in the past year. Used cars and trucks are up 27.2%. Household energy costs rose 14.4% and restaurant meals and other eating away from home costs 6.2% more, according to the U.S. Bureau of Labor Statistics.

Local residents told Newsday they have felt the pinch, particularly when buying food and gas.

"Any shelves, you see the price tag, and it’s gone up …" said Singh, the East Meadow resident. "You have to chip in more, extra. It’s painful."

He expects prices to keep rising before they level off. "Nobody’s talking about when it’s going to end," he said.

But several Long Islanders expressed optimism that inflation would be temporary and that their own incomes would help them withstand the jumps. Wages and salaries increased 4.3% year-over-year for private-sector workers in the New York metropolitan region in September compared with a year ago, according to BLS.

'We just need to be a little patient and see what happens over the next month or so.'

"It’s just a question of whether the inflation is short-term or long-term, and I think people may be jumping the gun and thinking that it’s long-term," said Phyllis Hampton of Garden City. "I think we just need to be a little patient and see what happens over the next month or so."

"My biggest concern is that middle- and lower-income Long Islanders will face the toughest times as food and gasoline become a greater percentage of what they spend," said Steven Kent, an economics professor at Molloy College in Rockville Centre and a former analyst at the investment bank Goldman Sachs in Manhattan.

After COVID-19 sent the U.S. economy into a tailspin, consumer demand roared back in late 2020 and the first half of 2021. Following the introduction of vaccines, gross domestic product, a measure of the country’s output of goods and services, rose at an annualized pace of 6.7% in the second quarter of the year, adjusted for inflation. Before the pandemic, the economy hadn’t grown at that pace since 2003.

As consumers began to increase their spending, global suppliers couldn’t keep up. Businesses struggled to hire enough workers and passed costs for fuel and supplies on to consumers.

Consumers also benefited from Biden administration stimulus checks in the spring, which allowed for more spending. But price increases can have the opposite effect.

"Inflation affects purchasing decisions because you cut back on discretionary items like leisure and hospitality to make sure you have enough money for staples like paying your mortgage, heating bill and buying food and gasoline," said John A. Rizzo, chief economist for the Long Island Association business group and a Stony Brook University professor.

Hicksville resident Joe Matz, a telecommunications technician, said he’s been working more and looking out for store sales on cereal and other items.

"If I’m not working seven days a week, I’m working six," said Matz, 44, who started signing up for extra shifts when a tenant moved out of the upstairs apartment in his house. "That was a hit, but then add on everything going up in price all at once."

Energy costs have been a major contributor to price increases locally, said Martin Kohli, chief regional economist for the federal Bureau of Labor Statistics in Manhattan. In January, those costs were actually 2.8% lower than they had been a year before. But starting in February, the cost of gasoline, electricity and natural gas began to rise, leading to October’s level 27.2% above the mark a year earlier in the broader energy category.

Soriah Gibson, 25, of Roosevelt, said she has been trying to limit her driving to her job as a licensed practical nurse and other essential trips. She said she can’t afford for gas prices to rise much higher.

'It’s costing me more money to fill it up than probably the car costs me in a year.'

"Me and my friends fight because I never want to drive when we go out," she said, laughing. " … My car is not that expensive. It’s costing me more money to fill it up than probably the car costs me in a year."

Freeport resident Jonice Baptiste said she has been able to weather price increases, but she worries about others.

'Luckily, I’m in a place where I can afford these things.'

"Luckily, I’m in a place where I can afford these things, but other people, when inflation is going so high, and they’re still making minimum-wage salaries, that’s not fair to them or their families," she said.

Island Harvest, a nonprofit providing hunger relief on Long Island, expects to see more people /in need now that prices are on the rise, said CEO Randi Shubin Dresner. She said relatively small increases can have a dramatic impact on struggling families, many of whom are still dealing with health and financial issues related to COVID-19.

"If groceries go up $25 that might mean someone can’t buy a new pair of shoes for their kid, who grew a size," Shubin Dresner said.

Michael Hollingsworth, a 64-year-old retired gas station clerk who lives in Uniondale, said in recent months he sought out help to pay for food.

'I had to go down to social services to get help for food because of the inflation.'

"I can’t even imagine how people are making it with the gas, the food, tolls, you name it," Hollingsworth said. "Now, I’m on a fixed income. I had to go down to social services to get help for food because of the inflation of the food prices. It’s impacting everybody."

Higher food costs come as Long Islanders are preparing to celebrate Thanksgiving meals. Meat, poultry, fish and eggs sold in the New York metro region cost 11.4% more in October than a year ago.

Past bouts of inflation

Concerns about inflation evoke past woes, such as the period of high inflation in the late 1970s and early 1980s.

Inflation can be particularly devastating when it is paired with slow economic growth and high unemployment, as it was in the summer of 1980 when U.S. inflation was near 14.5% and unemployment was 7.5%.

The current increase in prices isn’t a sign of economic weakness, said Rizzo, the LIA economist. Long Island’s unemployment rate fell to 4.2% in September from 5% in August.

"This isn’t like 1979’s stagflation, where you had high inflation and low productivity," Rizzo said. "And this isn’t like 2008 after a financial disaster."

"As the economy continues to reopen and spending rebounds, we are seeing upward pressure on prices, particularly due to supply bottlenecks in some sectors," Powell said. "These effects have been larger and longer-lasting than anticipated, but they will abate, and as they do, inflation is expected to drop back toward our longer-run 2% goal."

Economists are expecting inflation to persist through the end of the year, predicting prices will be 5.8% higher nationwide at the end of 2021 than they were the year before, according to a Bloomberg survey released Friday. Survey participants have consistently raised their forecasts in recent months, Bloomberg said. They estimated, on average, prices would be 4% higher at the end of June 2022 than the same month this year.

"Right now, inflation is so high that people are backing off on their buying plans," Lonnstrom said. "They’re just absolutely afraid to start making purchases."

He said the number of consumers statewide saying they planned to do a home improvement project in the next six months was down 10 percentage points in Siena’s Sept. 29-Oct. 7 survey of 797 adults compared with the June survey.

Other signs point to stabilizing prices next year.

The average price for regular unleaded gas on Long Island was $3.55 a gallon Friday, according to AAA. That’s 65.9% higher than a year ago, when gas averaged $2.14 a gallon. Relief is expected next year when the U.S. Energy Information Administration projects oil prices to fall because of higher production from major oil-exporting countries and the United States and slower growth in global consumption.

Kent, the Molloy economics professor, said he expects price increases will be temporary. One contributor to inflation has been a shift during the pandemic toward purchases of goods instead of services and experiences, putting pressure on manufacturers and shipping companies, which raised prices. As consumers return to restaurants, hotels and theaters, those businesses should be able to more easily accommodate demand.

"The supply chain disruptions are real, but they will eventually reverse," he said. "Take a look off Jones Beach or Long Beach at the number of cargo ships waiting to enter New York harbor … The good news is the products are there on the ships and eventually they will be offloaded and make their way to warehouses and stores."

Singh, from East Meadow, said he thinks prices will rise further before they level off.

"Holidays [are] around the corner. How are you going to afford it? You have to give gifts to your family and your friends. You can’t avoid that. But now we have to cut down on many, many things."

'I’m thinking sooner or later this will even out.'

Betti and Steve Braunschweiger of East Meadow said they haven’t felt personally affected by the changes even though they know others have been. They see the changes as cyclical.

"I’m thinking sooner or later this will even out," said Betti Braunschweiger, a teacher.