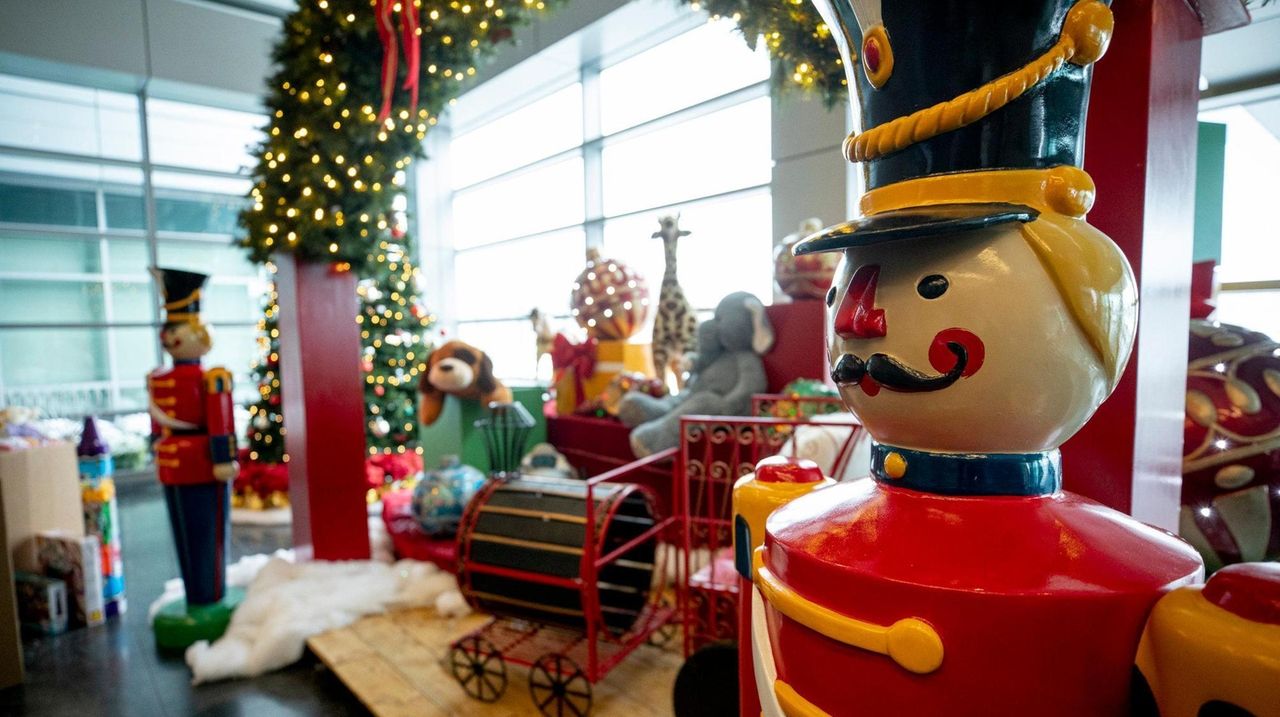 During the holiday season, some companies go all in on decorations, including Canon U.S.A. in Melville and Northwell Health in Westbury. Credit: Newsday Yeong-Ung Yang, Chris Ware

At some offices on Long Island, a modest Christmas tree or small wreath might be enough to welcome the holidays. But at others, taking decorating to the next level has become a wintertime sport.

In the lobby of Canon U.S.A. in Melville, employees are greeted by a Christmas display worthy of a Saks Fifth Avenue window, complete with oversize toy soldiers, a collection of massive tree ornaments and a winter scene filled with woodland creatures.

It’s one way the American headquarters of the Japan-based tech giant is able to give back to its employees, said Amy E. Newman, executive director of Canon U.S.A.’s corporate administration & regional operations.

“We’ve established some great traditions since 2015, when we first started decorating our lobby and our facility,” Newman said. “We’ve been adding on each year.”

Since the company has gotten into the holiday spirit, its displays have grown and Canon now counts an lighting ceremony as part of its growing list of festivities. This month, as part of its family photo day, more than 500 family member of Canon employees came by to have their holiday photos taken.

To make sure the professional-looking  displays and outside decorations go up without a hitch, the firm has a decorations committee  that begins planning in July.

“It does take an effort to establish the scenes that we want to provide,” Newman said.

At other offices, the holidays present an opportunity to employees to unwind from the seasonal stresses of a tall workload through some creative competition.

Each year inside Northwell Health’s administrative facility in Westbury, nearly 140 employees of the health system’s finance department work diligently  to transform the cubicle-lined office into a collection of original holiday displays, replete with lights, cardboard structures, and, in some cases, costumed employees.

For the last nine years, the finance department has broken into teams to compete to see which group can create the best, most original holiday display. What started off as a way to boost morale after a busy budgeting season has become a full-blown tradition.

“This is definitely the event of the year,” said Melissa Bruckner, a senior director of finance at Northwell Health. “It’s intense.”

The teams are given time during the day to work on their displays, which this year include such themes as Santa for President, Where’s Waldo Ski Resort and the Jones Beach Light Show. On Friday, judges made up of executives from the health system toured the displays and the winners will be announced at a company Christmas party Thursday.

“Obviously, we want to prove that we’re better than everyone else,” joked Garrick Autler, a team captain for a group of employees that has won first place two years in a row.

Past themes of Autler’s group include a live Nativity scene and a tableau of that classic old Christmas carol "Grandma Got Run Over by a Reindeer."

“We like to incorporate ourselves in our decorations,” said team member Nicole O’Loughlin.

At Total Dental Care, employees engaged in a friendly decorating contest of their own, transforming the two-story dental office in Middle Island into an international Christmas tour.

“Just about everything that they’ve done is handmade or, if it’s not handmade, they’ve taken something and altered it in some way,” said Christine Scrio, a practice administrator at Total Dental Care.

Handmade jelly fish dangle from the ceiling in Hawaii, an elaborate dragon hovers above the Chinese section of the building and, in jolly old England, next to a plate of crumpets, a painted image of the London skyline glows in the night.

“We’ve always decorated, but this is the second year that we’ve taken it to this level with our staff,” she said.

While getting into the spirit of the season has certainly been a treat for patients, Scrio said, ultimately, it’s the fun employees have that really makes the decorating worthwhile.

“It’s amazing what it does for their morale,” she said. “That’s why we do it.”