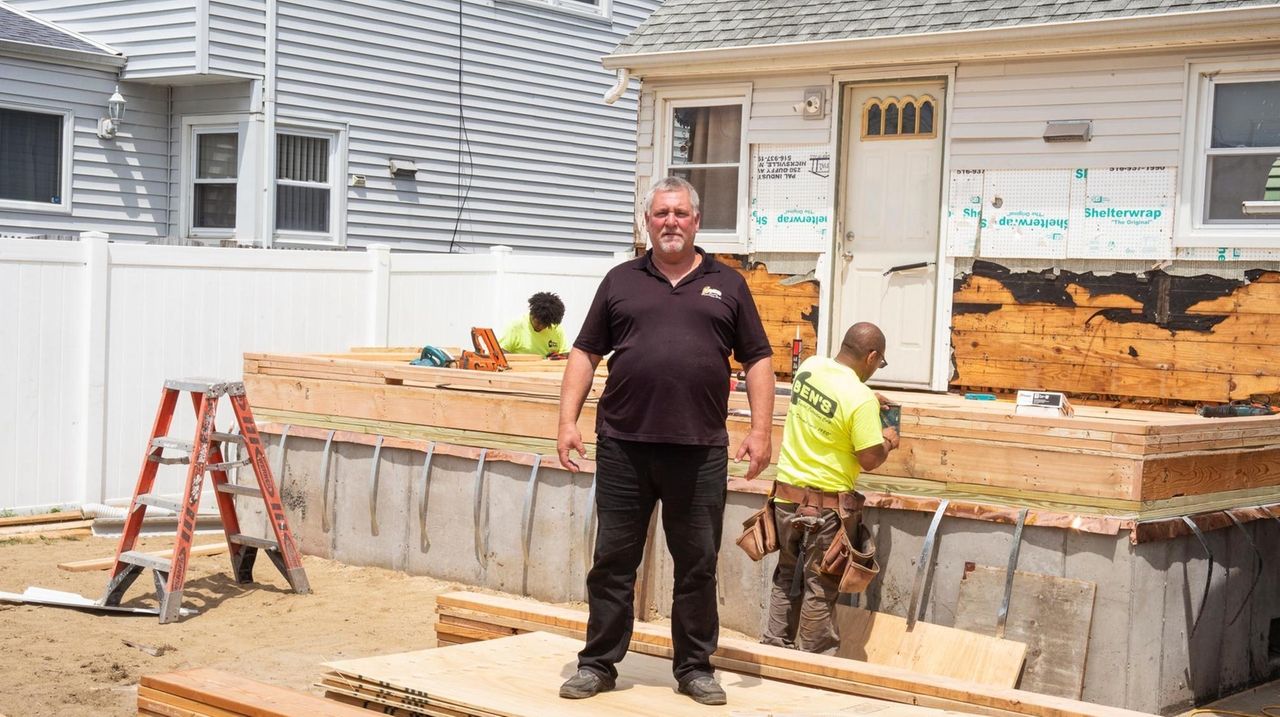 James Beauford Jr. and his family of five outgrew their three-bedroom home in Freeport, but they didn’t want to leave their neighborhood or jump into Long Island’s hypercompetitive real estate market.

So they decided last year to create more space by expanding their current home.

Trouble is, now they’re contending with high prices and scarce supply of building materials such as lumber and windows that have tacked on thousands of dollars to their renovation. The supply of many construction materials has dwindled – and costs have soared – ever since the COVID-19 pandemic threw manufacturing and distribution supply chains into chaos starting last year. At the same time, homeowners and builders have scrambled to remodel existing homes and construct new ones, leading to intense demand for construction materials.

The high cost of lumber, for instance, has driven up the price of a new home by $36,000, the National Association of Home Builders said last month. The price of softwood lumber, the wood most commonly used in construction, more than doubled during the 12 months ending in June, rising by 125%, the federal Bureau of Labor Statistics reported Wednesday. The prices sawmills charge per thousand board feet of lumber declined recently — plummeting from $1,514 at their peak in May to $637 on Tuesday — but they're still up 76% from two years ago, when the price was $361, according to an index of the price compiled by trade publication Fastmarkets Random Lengths.

Plus, contractors say that while sawmill prices have fallen, the prices charged by wholesalers, distributors and stores remain quite high.

Lumber is not the only building material whose price has risen during the pandemic. The overall cost of construction materials jumped 23% in June compared with a year earlier, the Bureau of Labor Statistics said.

The scarcity and soaring cost of construction supplies are posing yet another challenge for Long Islanders who have been conducting work and school from home during the COVID-19 pandemic. Many local homeowners, like the Beaufords, would like to renovate their houses because the severe shortage of homes for sale makes it difficult to move to a more spacious property.

Beauford said the increased price of materials has pushed up the cost of his family’s renovation — which will include a glassed-in addition on the back of the house, a new master bedroom and bathroom and an additional child’s bedroom on the expanded second floor — by nearly $20,000 compared with what it would have cost based on the price of materials last year, when they started planning for the renovation.

"It's really out of control," said Beauford, 43, a supervisor in the Village of Freeport’s recreation department, who lives with his wife, Nicole, a guidance counselor, and their three children, ages 5, 9 and 11. Even so, he said, "if we move to somewhere else, another neighborhood, looking at the type of house we want, it's like $800,000 dollars. So we put the extra money into our current home."

How the costs to expand a home changed

The price of many construction materials has jumped over the past year, driving up the cost of renovations. For instance, here's how some of the materials needed to add an extension onto a home have changed:

The high cost of construction materials has hit builders hard, too. One local contractor saw the cost of building a three-home subdivision rise by $30,000 from January to May due to lumber price increases, said Mitchell Pally, CEO of the Long Island Builders Institute, a trade group in Islandia. Despite last month’s roughly 10% decline in the price builders pay for lumber, the cost "is still significantly higher than it was, and the likelihood that it will go back to where it was is very slim to none. So no matter what, we're going to be faced with increasing lumber costs … and that's going to have an impact on the home-building industry," Pally said.

Many Long Island homeowners, Pally said, "don't want to move, but the existing house doesn't meet their needs, so they want to change it to meet their needs, [and] that's put a lot of stress on the renovation companies and the municipalities to allow that to happen."

Roughly 90% of builders reported shortages of appliances, lumber, windows and doors in May, the National Association of Home Builders reported. Nearly all the builders said material costs had risen, and more than one-third of respondents said overall prices had jumped by 30% or more, the group said.

Rising prices "have moved some new homes beyond the budget of prospective buyers, which has slowed the strong pace of home building," Chuck Fowke, chairman of the national builders' group, said in a statement. Some Long Island builders and retailers say they have seen prices double or even triple for the most in-demand items.

Late last year, an eight-foot, two-by-four piece of lumber cost about $4, but the price has risen as high as $11.79, Christopher Wagner, co-owner of Family Lumber in Bethpage, said last month. This month, he said, costs have fallen to about $10.

But with prices still so high, he said, some contractors who committed to jobs months ago "are either canceling the jobs or seeing if they can work something out, work out a deal with the homeowner" to split the higher costs.

The cost of decking material also has spiked, he said. An eight-foot piece of pressure-treated wood cost $6.31 in December, and $13.75 last month, Wagner said.

If there’s a modest increase in material costs, he said, "we take it on the chin. … I'm not going to nickel and dime everybody."

But, he said, "everything is going through the roof. ... I’ve got to be able to pay my overhead. If I don't pay for insurance, trucks and fuel ... then the job isn't worth it."

Builders also have faced "tremendous delays," with windows taking as long as 20 weeks to arrive, instead of the typical four to five weeks, said Sal Ferro, president and CEO of Alure Home Improvements in East Meadow. Roofing shingles have been so scarce, he said, "you don't order what you want, you get what the manufacturers can send you."

Due to pandemic-related delays, it can take "months and months and months" to get municipal approvals, and by the time the permits come through, the cost of materials can double or triple, he said.

Windows and doors can take anywhere from five to 18 weeks to come in, said Aaron Levy, chief business development officer at Window World of Long Island in Farmingdale. Throughout the industry, prices for those products have risen by 14% to 18% since January, though the national chain has not felt the full impact of the industrywide price increases because of its size and its contracts with suppliers, some of which were drawn up before prices rose, he said.

The company also sells roofing and siding. Roofing prices have increased by 15% to 25%, and the supply of products "has never been this bad," Levy said. Plus, he said, a new roof can require 60 to 80 sheets of plywood on average, and sheets now can cost up to $90 each at big-box stores, up from their previous price of $25 to $35, he said. "Many stores still have very limited supply," he said.

How the costs of a new roof changed

The cost of plywood and shingles needed for a typical roof replacement project rose by more than $6,000 from 2020 to 2021. Here's a breakdown of those price changes:

As for siding, prices have jumped by 25% to 35% since January, he said. Manufacturers have "indefinitely suspended" some colors to allow production of the most popular shades, but it still takes five to 20 weeks to get the materials, depending on the brand and color, he said.

Even basic materials like caulking have been in short supply, he said. "We have to do so much more planning than ever before, and a lot of phone time just apologizing and explaining what’s going on," he said.

The delays and high prices are expected to last at least until the fall, with some predicting they will continue into next year, Levy said.

Waiting for a refrigerator

In addition to the difficulties obtaining building supplies, household appliances also have been in short supply. Some Long Island contractors "are facing three- to four-month deliveries on refrigerators," among other items, Pally said.

Many retailers canceled orders when the pandemic hit early last year, causing suppliers to cut back, said Gregg Richard, president and CEO of Farmingdale-based P.C. Richard & Son. Business picked up last spring, but then the supply chain was hit by factory closings due to COVID-19 outbreaks, severe storms in Texas and other areas, the blockage of the Suez Canal, a fire at a computer chip factory and a shortage of massive shipping containers, he said.

Richard said he has not seen significant price increases for appliances, though manufacturers are offering fewer promotional discounts that can be passed along to consumers. The difficulties are expected to last until early next year, he said.

"It's a challenge for the manufacturers because if there's 50 parts in a refrigerator and they have 49 of them, but just don't have one, they still cannot make it," he said. "So while we have products, at times it's not the exact model or size that the customer [wants], so I think it's challenging and frustrating for anybody in our industry right now."

Remodeling an exercise in patience

Tom Caracciola, 69, a retired financial services executive, said he started planning a full kitchen renovation for his Greenlawn home last year, and paid for appliances, including a Sub-Zero refrigerator and a Viking French-door oven, last August. Most of the appliances did not arrive at the retailer’s warehouse until late last year or early this year, and a Bosch dishwasher still hasn’t come in, he said.

The renovation did not begin until April, and since then he and his wife, Lisa, a registered nurse, have been cooking in the outdoor kitchen in their backyard, he said.

During the monthslong wait for appliances, he said, "my wife kept on telling me, ‘let's be patient, you know, it's probably going to work out better, we can barbecue in the summer,’" rather than overhauling the kitchen during the winter, he said.

"While it hasn't moved as fast as I would like, I’m still surprised that it's moving along," he said. "When you see what people are suffering through, through this whole pandemic, it's difficult to get too upset about a kitchen remodel. You got to keep things in perspective. It's not life and death. So as long as everybody's healthy and happy. I could live without the kitchen for now."

Ferro, whose company is remodeling the Caracciolas’ kitchen, said the shortages and price increases have caused problems, but he expects they will ease in the coming months.

"I’m optimistic it will level off," he said. "That's all we can ask for, a stable period where it's level, it's accessible, and we can move forward."