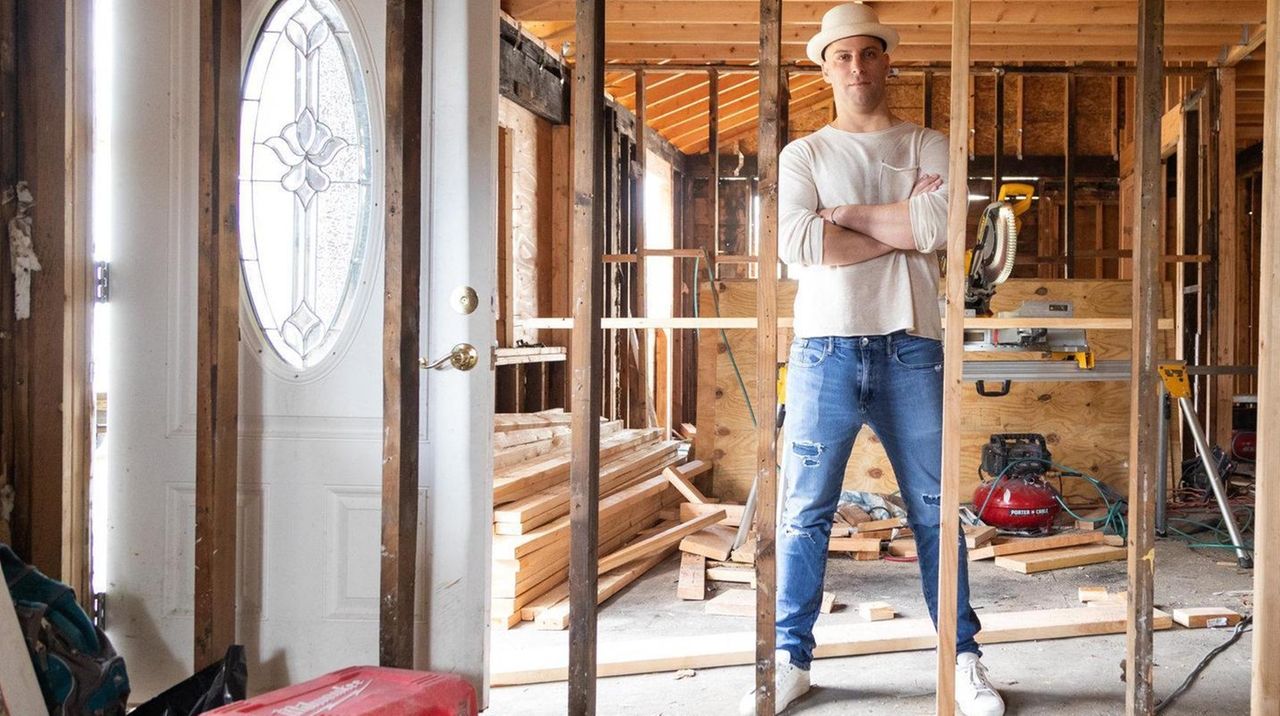 Long Island house flips in Nassau and Suffolk are on the rise, so we asked some experts what improvements and tips could help sell a house. Credit: Newsday

Long Island’s house flippers are out in force, making up the largest share of home sales in at least 15 years.

In Suffolk County, one out of every 11 homes purchased from April through June was sold by a flipper – that is, by someone who had purchased it within the previous year, a report this month by California-based Attom Data Solutions shows. In Nassau County, more than one in 12 home sales were listed by flippers, the company reported.

Over the last five years, the share of homes sold by flippers has nearly tripled in Suffolk, from 3.4% to 9.5%, and nearly doubled in Nassau, from 4.5% to 8.5%, Attom figures show. That’s much higher than the nationwide flipping rate of 5.9%, up from 5.2% five years earlier, Attom reported.

Television shows such as HGTV’s “Flip or Flop,” Bravo’s “Flipping Out” and A&E’s “Flip This House,” featuring quick turn-arounds and eye-popping profits, have raised the profile of house flipping.

But flipping isn’t always as simple – or as profitable – as it looks on TV, experienced investors on Long Island said.

“You have these shows that make it look so easy, like you just make millions of dollars,” with minimal time and effort, said Melissa Shea, president of the Ronkonkoma-based Long Island Real Estate Investors Association, which provides education and networking opportunities for investors. “I don’t think anybody wants to hear the reality of it.”

To be sure, the profits look impressive.

But house flipping doesn’t seem so easy once you factor in construction costs that can easily exceed $100,000, plus expenses such as property taxes, insurance, interest and real estate commissions, which can add up to $50,000 or more, even for a flip that only takes six months, local investors said. And that doesn’t include unpleasant surprises, such as one Long Island flipper’s discovery that a home’s previous owner had been growing marijuana in the basement, and had jackhammered through the cement floor to reach groundwater.

It’s typical for investors to buy homes that lack windows and doors, or have had their pipes stripped away, or are filled with garbage and stink of cat urine, or worse, experienced flippers said.

“It frightens your typical homeowner,” said Diane Gorenstein, a retired psychotherapist who flips homes with her business partner, Detra Sarris, a retired engineer and program director. One of their current projects is a gut renovation of a single-family home in Melville that previously had been carved up into multiple housing units, including in the basement and the garage, Sarris said.

Of course, there’s reason for investors to take on the challenge. On Long Island, the market for renovated starter and mid-priced homes remains strong, despite a slowdown in demand for luxury homes, and the region has plenty of long-neglected and zombie houses in need of major overhauls. Plus, lenders in search of higher returns and less regulation have made it easier to get so-called hard money loans, short-term debt with interest rates of about 10% to 14% and quick approvals backed by the value of the home and the buyer's real estate investing experience.

“Years ago it was tougher to get investor financing,” said Todd Yovino, president of Hauppauge-based Island Advantage Realty. But with interest rates near historic lows, he said, lenders are “not excited with 3% interest rates over 30 years, and they’re not looking to tie up their capital for that return on investment. They’re going to look for alternative places to put their capital.”

It’s not just lenders. Investors also are seeking returns in the world of real estate as stock markets gyrate and bonds yield low returns. Experienced flippers say there are risks, though. A few years ago, Long Island home prices were rising so fast, flippers could make quick profits while doing little or no construction work.  Not any more, since homes are expensive and the market is not rising as quickly as it had been.

Experienced investors, Yovino said, are now “more on the sidelines…. They’re not going to be hasty, they’re going to wait for the right opportunity.”

Five years ago, investor Nicholas Girardi purchased a run-down home in Levittown and flipped it without spending a penny on renovations. “I closed on it and I found an investor and I made my profit within 30 days,” he recalled. But, he said, “now it’s so competitive, there’s just no way to really accomplish that. You have to create your own value…. You have to know what you’re buying, what you’re getting yourself into.”

Investor Charles Weinraub, who goes by the name the Handsome Homebuyer, said he has purchased nearly 300 homes on Long Island over five years, most as flips and others as rentals. “I’ve unfortunately never found bags of cash or Rolex watches,” he said with a laugh as he stood outside a three-bedroom North Bellport home he is gut-renovating. “So far, it’s just a lot of stinky garbage.”

Now, though, he is focusing more on keeping homes to rent out, and expanding into commercial projects such as a proposed development on land owned by the Oceanside Jewish Center. In home flipping, he said, “the spreads are getting smaller and smaller and it’s getting harder and harder to make money.”

By contrast, he said, rentals provide a steady stream of income, regardless of the strength or weakness of the for-sale housing market.

“There’s always an economic downturn, it’s a certainty,” said Weinraub, who is getting a master’s in real estate development  from New York University. “I buy the rentals to sustain me when the economy isn’t doing well.”

Of all homes sold on Long Island in 2018, nearly 19% went to investors, compared with 7% a decade earlier, California-based data company CoreLogic reported. Those investors are focusing their attention at the low end of the market. In the bottom third of the market by price, more than one in three homes were purchased by investors, compared with about 12% of mid- and high-priced homes, CoreLogic reported. By contrast, nationwide only about 11% of all homes were purchased by investors last year, CoreLogic figures show.

All that competition is making it harder to turn a profit. Investors eked out an average return of 3.2% after expenses last year, down from 3.9% in 2015, CoreLogic reported. "Flipping is a risky business," Sarris said. Investors can lose money, or they can make profits of 15 to 20%, she said.

"There's a lot of newbie investors who are overbidding," said Brendon Luu, an investor whose family runs a granite and cabinet business. Finding an experienced partner is the best way to learn the business, he said.

New investors "feel that they can really operate the way it’s being shown on TV, which is not realistic," since many of those shows are based in much lower-priced regions, said Roy Clark, a real estate agent with LI Community Realty in Brentwood. "You have these investors that have been sold this dream and they’re going out in droves and there are not enough properties to support them."

The competition also has an impact on first-time homebuyers who get outbid by all-cash buyers.

But for the most part, investors focus their attention on the properties that need so much work, first-time buyers don't want them, Clark said. "Without having that know-how or expertise, they don’t want to be bothered, they’d rather have it be totally done," Clark said. By contrast, he said, investors aim to transform "the worst house on the block, the roughest, the toughest."

All the same, buyers of freshly renovated homes need to keep their eyes open, hiring an inspector or engineer to make sure construction was done properly and the house has a valid certificate of occupancy, investors said.

Flippers, too, need to proceed with caution. Some devote tremendous time, energy and money to transactions, and end up taking a loss.

Sheryl Keane, a corporate finance director who lives in Massapequa Park, said it looked like she had gotten a great deal when she bought a four-bedroom home in Massapequa for $360,000 in 2016. She sold it about two years later for $550,000, which looks like a hefty profit. However, she said she actually took a roughly $20,000 loss on the deal, due to about $150,000 in construction expenses, along with unexpected problems with permits, the electrical system, the basement and a leaking oil tank, and almost two years of mortgage payments at 7 percent interest.

Keane said she learned a lot about construction from that flip and will budget for higher expenses next time. Her advice to other new flippers, she said, is “don’t kid yourself on how long it’s going to take. Give yourself a year of holding costs, depending on how much work is needed.”

Susan Vincennie, president of Long Island Profiles, a Nesconset-based real estate data provider, said new investors can easily get in over their heads, so she has been devoting more time to advising those new to the market.

“If they don’t understand what price the market will bear and they don’t estimate the right budget, they could overpay -- and, even if they don’t, if they don’t manage the process efficiently, their carrying costs will eat away at their profits,” she said.

Jamell Givens, a real estate broker and investor, knew he'd wanted to get into the housing market since he was a kid playing Monopoly. He got his start in 2003, when he found a Bay Shore house scheduled to be sold at a foreclosure auction in nine days, and he managed to get a loan in six days, he recalled. “The market was thriving, the banks were basically giving away money," he said. “That was my first taste of investing, and it was pretty cool."

Givens said he and his investment partner have flipped about 150 homes on Long Island and in Brooklyn and Queens over the last six years.

Despite the profits they have made on those flips, Givens said this year he and his partner have decided to hold onto about 20 homes as rentals.

He said he has noticed that for-sale homes are sitting on the market longer, especially at the high end. “With the rentals, it hedges us” in case of a downturn, he said. "When we do a flip, it's a one-time payday."

Home flips as a % of all sales