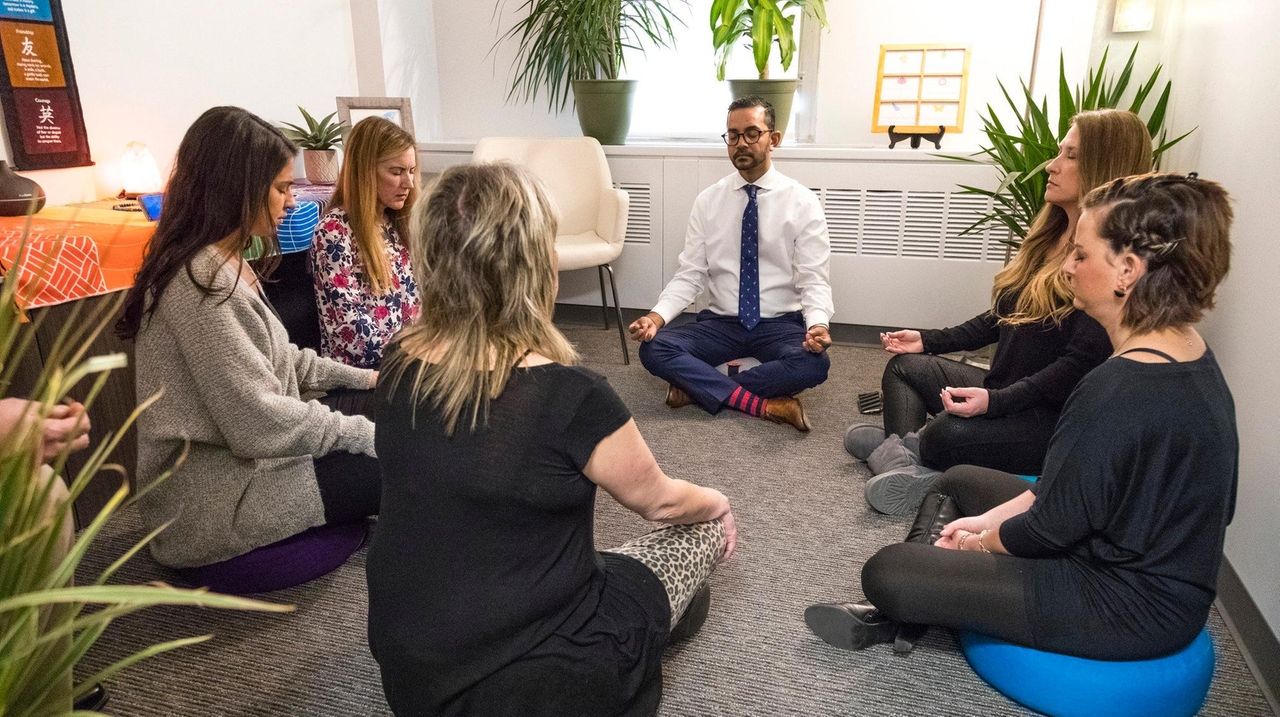 Long Island employers are offering out-of-the-box job perks to attract new recruits and hold onto experienced workers in a tight job market. On Nov. 18, Picciano & Scahill, PC staffers talked about their meditation room, where people can go to decompress and de-stress during the work day. Credit: Heather Walsh

The benefits — ranging from on-site child care and unlimited paid time off to recreation and wellness options — go far beyond the standard health insurance and 401(k) offerings.

The biggest driver behind the perks, hiring experts said, is the region’s historically low unemployment rates.

“It is incredibly hard to find smart, talented people to fill any position. Not just a high-level position. Any position,” said Rob Basso, chief executive of Associated Human Capital Management in Plainview, which handles payroll and HR functions for about 1,000 small and mid-size firms. “It’s gotten harder because of the unemployment rate.”

The Island’s annual unemployment rate in 2018 was 3.7 percent, the lowest it's been since 2000, according to state Labor Department data. The rate was 3.5% in October.

Benefits “are increasing in importance,"  said Jennifer Carey, president of the Long Island chapter of the Society for Human Resource Management (SHRM). “A lot of companies offer the typical standard medical benefits. When you’re trying to make the decision between one employer and another … it comes down to what makes an employer stand out.”

In its annual survey of employee benefits, SHRM found that in April 2019, employers were more likely to increase benefits than to decrease them, and that only 3% of employers decreased benefits between April 2018 and April 2019. Health care and retirement savings plans remained top priorities for employers, with 70% responding that they maintained health care benefits at existing levels this year, and 93% saying they offer 401(k) plans.

In certain fields on Long Island, salary rates and basic health care or retirement offerings can be similar, Carey said. “Companies that offer different or boutique benefits have higher response rates" to their job ads, she said.

While fringe benefits such as flexible hours or generous vacation time can serve an important role in recruiting and retention for companies, and are a bonus for employees, they can also help employers compete for workers without raising salaries.

“It’s not that [companies are] necessarily being nice" in offering the perks, said Gregory DeFreitas, professor of economics at Hofstra University. "It’s that they see that workers value benefits.”

“It’s a non-wage form of compensation and is a means by which they can hold wage increases down while holding onto as many employees as possible,” he said.

Wages can indeed play a big part in attracting talent, but all things being equal, certain benefits may tip the scales in favor of an employer, Basso said.

“Employees say all they want is the best pay,” Basso said. “They say it’s about the best pay, but they care about the perks. Those perks matter. They might not say it when they’re sitting in the interview.”

While a firm's size can financially limit the types of benefits it can reasonably offer, even smaller companies, like AllBoxes Direct of Jericho, can offer perks that go beyond the norm.

More than a year ago, the food packaging company rolled out an unlimited paid time off policy for its staff of eight. The company, established in 1997, sells packaging materials to food manufacturers who ship perishable products, like steaks or vegetables, directly to consumers.

AllBoxes president Mitch Weinreb said the unlimited PTO policy is fairly straightforward: “When an employee needs off, they take time off and they get paid. We don’t have set vacation time.”

“You still need to request it and have it approved, but as long as it’s approved and it works for the team, it’s fine.”

Weinreb said part of the reason he is able to offer the policy is because of the company’s smaller size and the fact that many of the required job functions of a provider like AllBoxes are outsourced.

"It's just so flexible," said Denise McDermott, a saleswoman at AllBoxes who works remotely from her Franklin Square home. McDermott said working from home, combined with the ability to take time off when she needs to, lets her balance her career and personal life much more seamlessly.

“It’s so stress-free knowing you can take a day or vacation, and everyone’s helping you,” said McDermott, adding that when she needs to take time off, co-workers can cover her tasks, and vice versa.

Just 6% of employers said they had an unlimited paid time off policy in 2019, but that's double the 3% that offered the benefit in 2015, according to SHRM's benefits survey.

On the surface, a law office may not seem to be the ideal place to clear one’s mind and focus on breathing, but for Picciano & Scahill and its newly established meditation room, mental wellness has become part of company culture.

In September, the Bethpage firm, which primarily handles insurance defense cases involving auto accidents, turned a spare space at its new office into a mental wellness room for its 140 employees, complete with lavender oil diffusers and meditation bolster pillows.

“It is a new concept and we are seeing how we can get the employees more involved” in the meditation offering,  said Vickram Kooblall, director of the firm. “People recognize that this is something different and is probably outside the comfort zone" of most professional organizations, but something his company is willing to try.

The idea for the mental health space came from Carolyn Ryan, a litigation manager at the firm who is also a yoga instructor and nutritionist. Ryan was inspired after the firm ran an educational session on mental health in early September.

“Meditation is becoming such a popular thing these days,” said Ryan, who has run guided meditations in the new room. “Stress reduction is huge in the workplace.”

Christie Puco, a paralegal, said she got into meditation before the firm created the room after she received a cancer diagnosis in early 2018. Cancer-free now for a year, Puco said she meditates regularly.

“It’s nice to go in there and hit the reset button when you’re stressed out," Puco said. "Even if it’s for 10 minutes, you come out and you feel so much better. You can concentrate better and get more work done.”

According to SHRM's survey, the percentage of companies that offer on-site stress management programs has grown from 5% in 2015 to 13% in 2019. Around 21% of employers offered on-site quiet rooms for personal use, including prayer or meditation, according to the survey.

With child care costs squeezing the finances of many parents on Long Island and across the country, on-site child care services like those offered by Cold Spring Harbor Laboratory serve as a major draw for workers.

The lab, which employs more than 1,100 people, said its child care center can look after 50 children ages 6 weeks through 6 years old, and has a waitlist.

Nikolay Rozhkov, a postdoctoral fellow at the lab, has used the service for all three of his children, ages 3, 4, and 6, and said the benefit has made it possible for him to raise a family and advance his career.

“There's no other place I could afford to have three children and be a post doc,” Rozhkov said. In addition to the lower cost, he cited the convenience and quality of care. "Those people provided the best care for my children.”

The tuition “is probably about 50 percent of what people pay on the outside,” said Katie Raftery, vice president of human resources.

Benefits like cheaper child care, free mental health counseling and the lab’s on-site wellness center staffed by nurse practitioners all serve as ways to make sure employees are “free to do what they do best, which is research,” Raftery said.

“The lab recruits scientists from all over the world,” said Dagnia Zeidlickis, vice president of communications. “The opportunity to be able to raise a family and have a scientific career that the day care center supports, that’s a huge asset when you’re thinking about the relocations people are making.”

Four percent of employers offered subsidized child care centers or programs in 2019, the same percentage as in 2015, the SHRM survey found.

At Mercy Haven Inc., a provider of affordable housing for the homeless and individuals with mental illness, a flexible work schedule that gives employees an extra day off every two weeks has helped the nonprofit compete despite lower salary offerings.

“People appreciate only having to work nine days instead of 10, and I don’t think it matters what age they are or salary they have,” said Sister Patricia Griffith, executive director of Islip Terrace-based Mercy Haven. “It is an attractive thing to be offering people who end up getting a three-day weekend.”

Most of the organization’s 75 employees participate in the alternate workweek schedule, which requires that employees work an additional half-hour to an hour a day for nine days but allows them to take off the 10th day in exchange.

The nonprofit instituted the policy in 1992 to make up for lower wages, Griffith said.

“At that point the amount of money we were giving staff was sort of embarrassing, but it was what the state was allowing,” she said. “We thought it was a way to make it more just.”

Part of the issue regarding pay, she said, is that wages are tied to a state reimbursement rate “that isn’t generous.”

Still, the nonprofit offers what it can, including completely company-paid vision and dental plans, as well as generous health insurance plans.

For Dealertrack, a developer of software for auto dealers, interesting perks — like indoor cricket and on-site yoga instruction — are ways the company competes for some of the most sought-after employees in the market today: technology workers.

The Long Island software giant, which relocated to its new  233,000-square-foot North Hills headquarters in 2017, offers a bevy of supplemental benefits to employees, including free shuttles to the New Hyde Park train station, free personal fitness training, and an area dedicated to gaming complete with video games, foosball and table tennis.

About 25 of the 565 employees use the train station shuttle, the company said.

All of the company’s efforts are aimed at creating a comfortable working environment that's conducive to creative thinking.

“People do that best when they feel most relaxed and at home,” said Laura Detke, senior director and HR business partner for Dealertrack, a unit of Cox Automotive, part of Atlanta-based conglomerate Cox Enterprises Inc. “It helps to create collaboration.”

The idea of creating an area for cricket came about "organically," Detke said. "We had a group of people who were interested in cricket. Our team members just got together and said, 'We're going to do this.'”

One of the key ways the company develops intriguing perks is by seeking frequent employee input from its Long Island staff. One of its most recent offerings? Unlimited paid time off.

“It goes towards creating the kind of environment where there’s trust within the organization,” Detke said. “We know that people are responsible and accountable.”

See which companies ranked as Long Island's Top WorkplacesMore than 16,000 employees at 117 LI companies were polled on everything from pay to benefits to leadership. After analyzing all the results, 80 companies were selected as top Long Island workplaces.