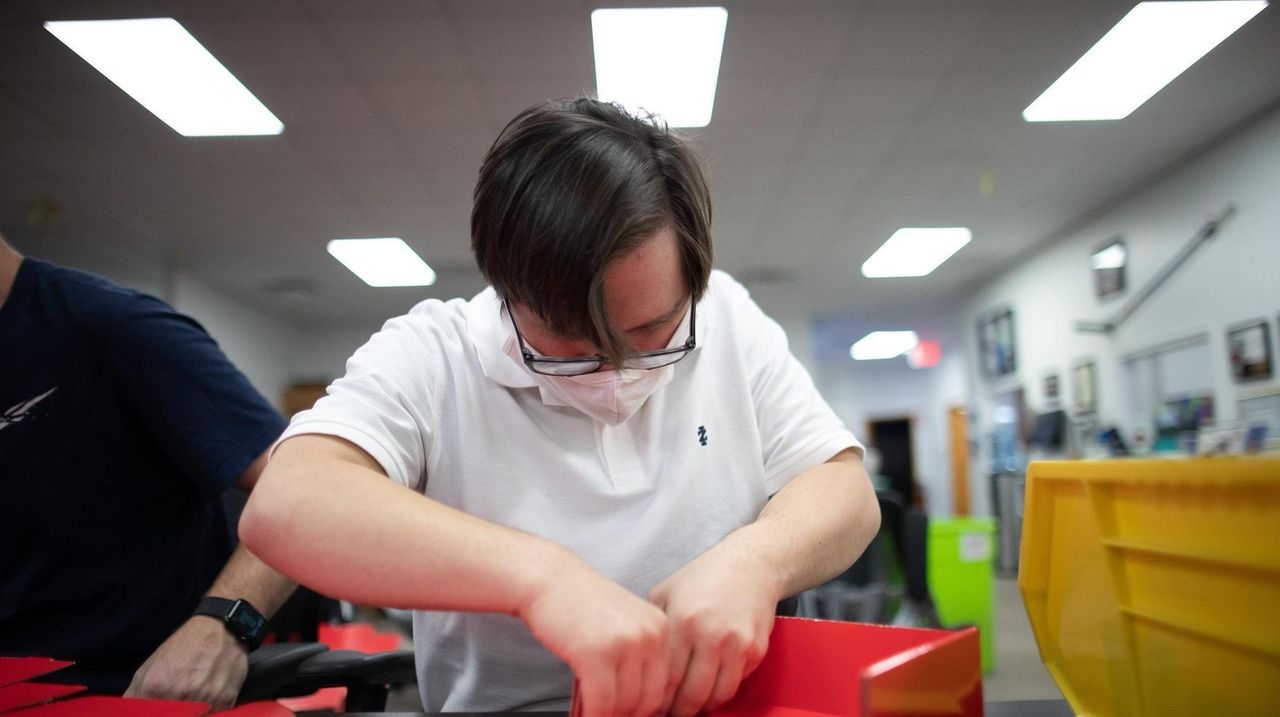 Mark Cronin, co-founder of John's Crazy Socks, says his business is able to fill openings quickly by hiring workers with differing abilities. Cronin says the company focuses on what employees can do, not what they can't.  Credit: Kendall Rodriguez

Mark Cronin needed five new employees for his e-commerce operation in Melville. Within three days the jobs were filled.

Meanwhile, employers across Long Island and around the country are complaining of an acute labor shortage, with long-time staffing experts calling it the toughest hiring market they’ve ever seen.

"We have an increasing number of employers saying, ‘I can’t find enough good workers,’" said Cronin, whose company employs 31 people, 21 of whom have a developmental disability. "At the same time, we have this population of people who have a high unemployment rate and are ready and willing to work. It’s a natural fit."

The national unemployment rate for workers with disabilities was 9% in September, more than double the 4.4% rate for people without disabilities, according to the Bureau of Labor Statistics.

Long Island unemployment rates for workers with disabilities are not available.

Cronin, whose son and business partner John has Down syndrome, said many business owners tend to worry about "things that don’t matter" when filling a role instead of focusing "on what the job requires."

The entry level position the Cronins’ company offers at its fulfillment hub is package picker, or "sock wrangler" as it’s known on the floor. The position, which starts at $15 an hour, requires job applicants to pass an interview process showing they can pick orders quickly and accurately. As long as they meet the company’s standard, the rest, whether it be verbal or other soft skills, are less important, he said.

"It’s no charity, we don’t give out jobs," Cronin said. "Everybody who works here has earned their job."

John Schneider, 31, an experienced sock wrangler who has worked at the company for three years and helps train new recruits, said it’s a supportive workplace.

"They’ve been very good to me," said Schneider, who lives in Ronkonkoma. "I definitely enjoy my time working here, and I feel comfortable too."

One of the many small but helpful things the company does to support workers like Schneider is clearly label product aisles in the pick-and-pack warehouse, he said. "It’s easier for me to be able to look for those socks." He’s also a fan of the company’s regular afternoon dance parties.

The apparel company is his first paying gig. Schneider said he’s applied for jobs at other businesses multiple times without so much as a call back.

Schneider said more employers should try "giving me a chance to show them I can do the work."

The employment picture for disabled adults has been comparatively grim for decades, disability advocates and vocational training experts said.

The U.S. labor force participation rate — representing those who are either employed or actively looking for work — for individuals 16 and up with disabilities was 22.3% in September, just a third of the 67% rate for workers without disabilities, according to federal data.

"Those numbers are staggering, and they haven’t really gotten better in 30 years," said Sheryl Buchel, interim chief executive of the Albertson-based Viscardi Center, a network of nonprofits that provides services to children and adults with disabilities.

Many of the challenges adults with disabilities face in the labor market come down to employer biases, fears concerning reliability, and misconceptions over capability, Buchel said.

Given those barriers, she isn’t surprised to hear that employers like Cronin and others who make it a point to hire workers with disabilities are finding it much easier to recruit than employers who don’t.

"It’s really a supply and demand issue," Buchel said. "There are more individuals with disabilities who want to work than there are employers who want to hire them."

Kristina Hillman, 36, a recent hire at John’s Crazy Socks, said not every employer she’s had has been as supportive or accommodating as the Cronins.

"It’s more friendly than the experiences I’ve had in the past," said Hillman, who lives in Wantagh.

At previous jobs, she said, "It was hard to fit in" and managers weren’t always responsive to her needs.

Recounting past experiences working at a grocery store, Hillman said she was once cursed at by a co-worker, so badly that she had a panic attack. Her manager did nothing in reponse, she said, and demanded she get back to work after a short break.

Hillman said she hopes more employers understand that those with disabilities are looking for the same opportunity and respect as other jobseekers.

John’s Crazy Socks isn’t the only employer who’s had great luck in staffing.

"We always have more people who want to work than we have jobs for," said Patrick Bardsley, chief executive of nonprofit Spectrum Designs in Port Washington. "I have a waiting list of candidates. Who else can say that right now?"

Spectrum’s 59 employees – 35 of whom have a disability – make custom screen-printed apparel for events and organizations. Previous clients include Google and Uber.

While the company has made its printing shop supportive of its employees’ needs by using colorful labels on equipment and providing written instructions for certain tasks, Bardsley said the modifications are minor.

He said it’s frustrating to hear so many employers talk about a hiring crunch when so many potential candidates are looking for an opportunity to prove themselves.

"I get sent resumes almost every day," he said. "You have a surplus of people who want to work but can’t get work."

One recent ray of hope for disability advocates has been increasing conversations about diversity, equity and inclusion initiatives at many companies nationwide, spurred by ongoing discussions of racial justice and equity. Executives like Buchel believe those conversations should also include disability.

"Disability falls right in there so it should be a part of any company’s DEI effort," she said.

Founded in 1957, ACLD places about 50 individuals at local employers each year, finding a suitable position for an average of three to four jobseekers a month.

Last month, the organization placed nine individuals. Shelton hopes it’s not an anomaly and instead a longer-term pattern.

"What we see is that more and more employers are very accepting of employing a diverse workforce," Shelton said. Progress on the issue has been "slow, but it’s steady."

Donte Blades, assistant director of vocational services at the Developmental Disabilities Institute (DDI), a Smithtown-based nonprofit, said individuals with disabilities often make dedicated employees after landing a job opportunity, though they usually have to "work twice as hard to get those opportunities" as other applicants.

Blades said part of his job is educating employers on the supports his organization offers, like continued job coaching and check-ins. But sometimes it requires correcting misconceptions about a worker’s potential and showing how a little support up front can lead to a long-lasting, valued employee.

"What I’ve seen is a lot of the individuals that we’ve served, their biggest goal is to live independently and to find employment," he said. "When they’re given the opportunity to work or have their own apartment, they take a lot of pride in that, and the pride shows in their work."

One local organization dedicated to hiring and growing the local labor pool is South Fork Bakery in Amagansett.

Shirley Ruch, founder and executive director of the nonprofit, started the commercial baking business in 2016 with the goal of providing job opportunities for young adults with developmental disabilities. Since then, the operation has gone from selling its baked goods – blondies and brownies are their biggest sellers – at six store locations to more than 40 businesses between Westhampton and Montauk.

Despite the increased sales, Ruch said the 15-person operation can only hire so many and she often has a waiting list of job candidates.

"I don’t have enough work to hire everyone," said Ruch, a practicing speech pathologist and therapist. "We want to impact more people."

To help with that goal, the bakery is starting a pilot program this year that will train would-be food workers at its rented kitchen space to work in different cooking settings before being placed at other food service businesses on the East End.

"Employers at other companies out here have heard about us and have sought us out for employees," Ruch said. For four months now, two workers trained at the bakery have been working at another food business, where they receive continued career coaching from Ruch’s team.

"We have employees ...who may need a little support at the beginning, but they are great employees," said Ruch.

"They’re reliable, they’re always on time, and they want to work," she said. "That’s not always the case in the general population."

State to invest $11M to expand job opportunities for workers with disabilities The funds will expand a statewide network of resource coordinators tasked with connecting employers with jobseekers.