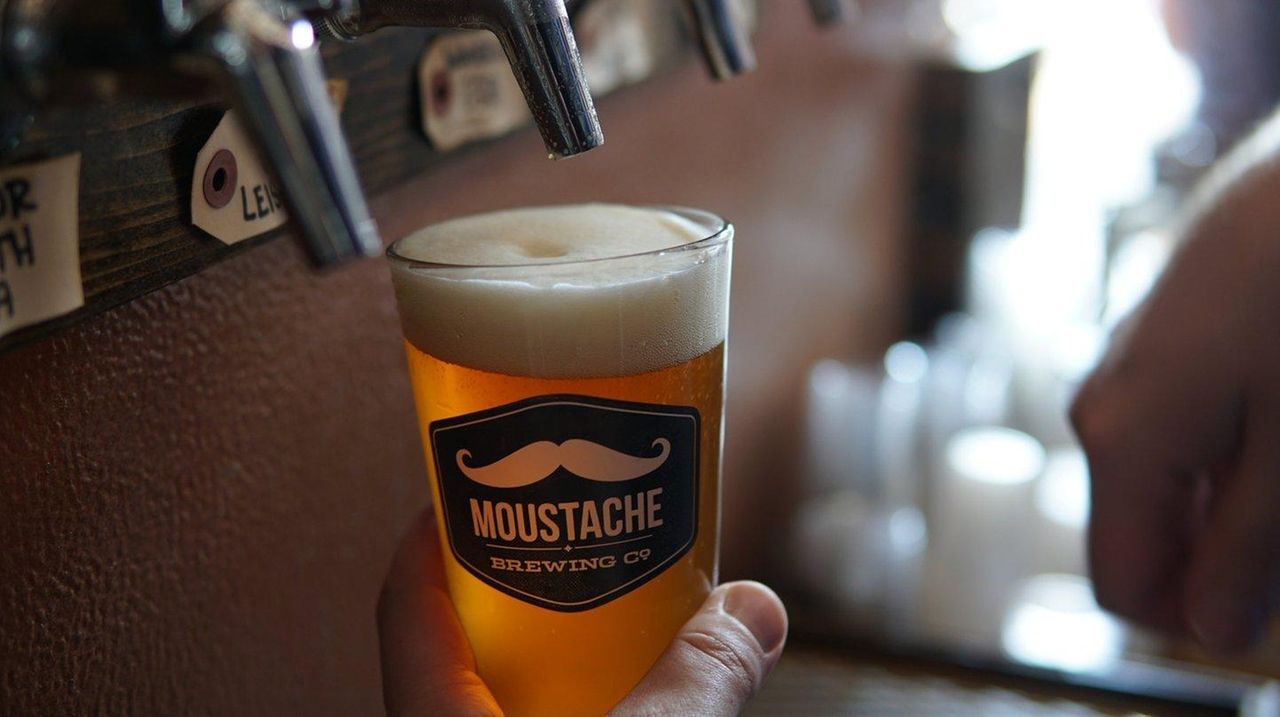 Moustache Brewing Co. owners Matthew and Lauri Spitz were able to start their dream business in Riverhead thanks to the crowdfunding website Kickstarter.

Long Island startup businesses are finding that getting free money on the internet is hard work — and far from a sure thing.

Local companies including a brewery, a lingerie designer and a maker of art supply organizers have used “crowdfunding” websites to raise the money they needed to start their businesses. The money was contributed by donors who had no expectations for financial benefits in return and just wanted to help a new venture. Others — businesses, art projects, documentary videos and publishing projects — didn’t succeed in raising any money.

Crowdfunding is a relatively new concept. Entrepreneurs needing funds to kickstart their new ventures have traditionally used banks, credit cards or family loans. But in the past decade many have instead turned to crowdfunding websites, such as Kickstarter (founded in 2009) or IndieGoGo (formed in 2008), to raise hundreds or thousands of dollars.

The websites allow fundraisers to set a goal. On Kickstarter, if a campaign doesn’t raise the money it wants in a set time period — usually 30 or 60 days — it doesn’t get any funds, and donors are not charged. If it meets or exceeds the goal, the company keeps the money — less 5 percent that goes to the crowdfunding website, plus credit card processing fees. (IndieGoGo campaigns can let entrepreneurs keep money if they don’t meet their goals, but the website doesn’t publish data about its fundraisers’ success rate.)

How successful are Kickstarter projects on LI?

Donors don’t get a stake in the company. Depending on the project, donors will sometimes receive products or branded merchandise in exchange for their contribution. However, since there are no guarantees that a project will succeed, there’s also no guarantee that rewards will be disbursed. About 9 percent of successfully funded projects don’t deliver the rewards they promised to donors, according to Kickstarter. Donors range from family and friends to complete strangers.

“A lot of people thought the [crowdfunding website] founders were crazy and this was never going to work,” said David Gallagher, a spokesman for Greenpoint, Brooklyn-based Kickstarter. “Why would you give people money? That kind of runs counter to lot of conventional wisdom and capitalism.”

There have been 641 Kickstarter campaigns launched on or related to Long Island, with only 173 of those, or 26.9 percent, reaching their goals, according to a Newsday analysis of the platform’s listed projects. Successful projects asked for amounts small and large, from $400 to make and sell computer components, to $60,000 to create a new rap album and music label. Successful Island projects on average asked for $5,690. The successful Long Island Kickstarter projects asked for $984,433 in total, and received more than that.

Even businesses that fail to meet their monetary goal, such as a garment maker in Huntington, sometimes find that the effort raises their profile and helps them in other ways.

More than 143,000 projects have succeeded in raising money through Kickstarter in the United States and internationally, getting donations of more than $3.2 billion dollars, the website says.

To encourage contributions, the platforms allow those seeking funds to offer tiered rewards — often branded merchandise or the product that campaigners are hoping to make — for different levels of contribution.

While some campaigns have used crowdfunding to raise millions of dollars, most projects never see a dime, according to Kickstarter.

Crowdfunding experts and successful campaign organizers say that while the funds received from sites like Kickstarter and IndieGoGo can help start a new venture, raising awareness and interest in a business’ goals is tiring work.

“For anyone’s that’s running a campaign, they’ll tell you that running one will takes years off your life,” said Sarah Meister, hardware, design and technology outreach manager for San Francisco-based IndieGoGo. “It’s hard.”

Individuals looking for funds often underestimate the amount of work needed to promote a campaign, said Phil Rugile, director of the LaunchPad Huntington, a co-working space for startup companies.

“It almost becomes a full-time part of your job,” said Rugile. “The platform itself is a good platform, but you have to drive the traffic.”

On Long Island, almost all investment dollars go to business-to-business companies, he said. But crowdfunding platforms are a better fit for consumer startups than business-focused ones, since they attract individual donors who “think something is cool” about the idea, he said.

When spouses Lauri and Matthew Spitz of Riverhead decided six years ago to open a commercial brewery, the home-brewing hobbyists had no collateral or other means to come up with the $25,000 they would need, Lauri Spitz said.

After a videographer friend mentioned using Kickstarter to fund a documentary, the pair decided to try it out. After researching how other brewery projects had handled Kickstarter campaigns, they launched a campaign for Moustache Brewing Co. in April 2012.

“That month of Kickstarter was certainly a prequel to the amount of stress of owning business,” said Lauri Spitz.

During the campaign, both partners were working at other jobs, and most of their free time was dedicated to answering questions from contributors, reporters and bloggers, and reaching out to their network of friends and acquaintances about donating or sharing the campaign online.

“There was no non-plugged-in time,” she said.

The other challenge, she said, was coming up with rewards they could offer to contributors. They decided to offer donors branded bottle openers, T-shirts, pint glasses, and private tours of the brewery after its completion.

Moustache exceeded its goal of $25,000 by more than $6,400. The couple spent the next two years buying equipment and finding space for the brewery. Today, the company is quadrupling its operating space from 1,400 square feet to 5,600 square feet, employs 8 and produced 17,267 gallons of beer last year, up from 3,007 in 2014. Its beer can be found in bars and retailers across the Island and New York City.

Spitz said its hard to know what would have happened without Kickstarter: “I honestly don’t know where we would have looked for funding.”

“We were just two girls straight out college and had no savings and had no money, but we were really determined,” Kali said.

The siblings set a goal of raising $10,000, which they estimated they needed to buy equipment and fabric, launch a website, and make software that would allow customers to customize orders. The sisters and part-time help sew the items themselves.

“We had this imaginary idea that we would just launch our Kickstarter campaign and people would find us, but it really was a social media campaign,” Kali said. After launching their funding effort, the pair went on a full-on social media blitz, reaching out to friends, family, old high school classmates and acquaintances repeatedly for the 30 days of the campaign. “It was just nonstop,” she said.

Kali said that she and Noelle each spent 60 to 70 hours a week finding contacts to generate press coverage, posting about the campaign on Facebook, Instagram and Twitter, and writing hundreds of messages to potential contributors.

“It wasn’t enough just to have it on Kickstarter,” said Noelle.

“It was just the icing on the cake that we were able to do more than we even thought,” Noelle said.

Eileen Baumeister McIntyre and Patti Kern, two professional artists who teach art at Newfield High School in Selden, successfully ran a Kickstarter campaign in the fall, raising more than $6,000 for their Artist Cargo Sketchbook Organizer, which comes equipped with pouches for art supplies. The business, based in Kings Park, contracts out the manufacturing of the organizer, and sells it online. The artists also run an art portfolio review service, Online Portfolio Prep, based in Miller Place.

The fundraising campaign “was a learning experience,” said McIntyre, who also operates a boutique jewelry store in East Hampton. “We decided that Kickstarter would be the best way to have a test market before we invested thousands of dollars.”

Launching the crowdfunding campaign required a lot of prep work, ranging from putting together a website for the product to working with former students to create a video needed before the campaign’s launch, Kern said.

“It forced us to really think about the [product] idea and marketing,” said Kern.

The act of “putting yourself out there” on Kickstarter has led to some business opportunities, she said.

“We’ve had large corporate art suppliers contact us [about purchasing the product] as a result of the Kickstarter,” said Kern. So far the business has brought in about $17,000 in revenue, and is expanding its product line.

“Even if you don’t reach your goal, you’re still spreading the word of your product,” said Russo, who started the business seven years ago out of her Huntington home with her two daughters. “You never know who’s going to see you and who’s going to take an interest in your business.”

In 2013 Russo set out to raise $33,000 on Kickstarter, money that would’ve allowed her to start getting the garment made by a contract manufacturer. She did little to promote the campaign, she said.

Donors pledged only $3,251, far short of the goal, so Russo didn’t get any money.

But Russo got an important side benefit: When she told the owner of a local restaurant she frequented about her campaign, the restaurateur invested $40,000, enough to allow Russo to begin selling online.

In 2016, Russo — with the help of a videographer friend — created a professionally produced video showing off her product to raise $7,000 on Kickstarter. Again, she fell short of her goal, but the video caught the attention of TV producers at ABC, who made her a contestant on the network’s “Steve Harvey’s Funderdome,” a 2017 competition show for startups.

Articles and videos about her Funderdome appearance led to a call from the makers of a new internet show, “Entrepreneur Elevator Pitch,” by Entrepreneur magazine in partnership with IndieGoGo.

Now Russo is hoping to raise $15,000 to expand product offerings and trademark the HoodiFit brand, and she’s using IndieGoGo’s flexible funding option, which allows campaigners to take any money they raise whether they meet their goal or not. The campaign ends June 15.

“People have to hear who you are over and over again,” Russo said. “There are no failures, there are only lessons.”

Cops say they believe triple killing in Farmingville was a targeted attack
After vandalism, cleaned Floyd statue will move to Manhattan
School administrator criticized for equity efforts steps down
Cuomo team assails investigators as probe hits pivot point
1:52
Going to the chapel, but first a detour to LI for that marriage license
Search enters fifth day for escaped bull
Didn’t find what you were looking for?