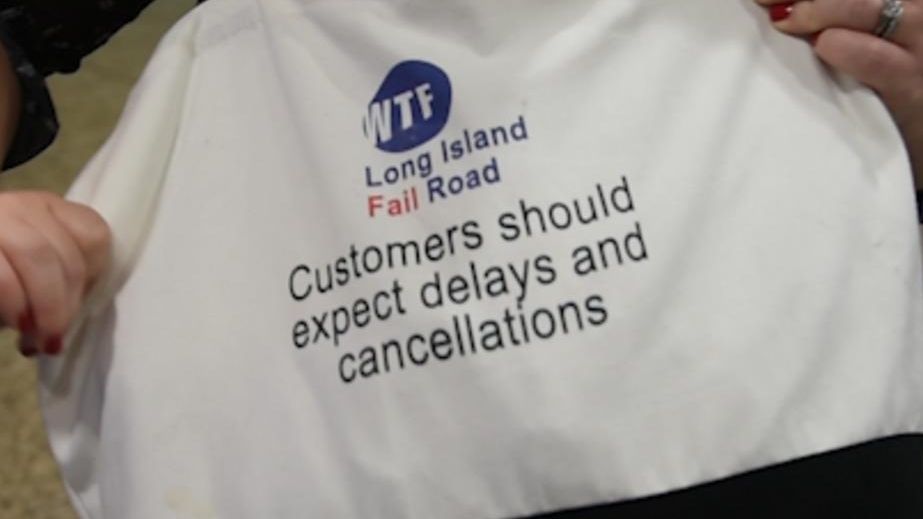 Frustrated Long Island Rail Road commuters Deirdre Vesce Roddin, of East Rockaway, and Karen Raccioppi, of Glen Head, have both designed a tote bag to show how fed they are with the LIRR. Credit: David Handshuh, Howard Schnapp

Enterprising Long Islanders are selling pins and bags stamped with “Long Island Fail Road” and other anti-LIRR messages to commuters who want to wear their frustrations on their shoulders.

The merchandise, which is marketed online through members-only Facebook groups, was designed by commuters who said they’re fed up.

She ordered 50 bags with the words from an online retailer, and said when she receives the shipment on Wednesday she will sell them “at cost” for $23 each.

“I’m planning a happy hour at Penn Station so I can sell and distribute the bags, just in time for the disruptions,” Raccioppi said.

Deirdre Vesce Roddin, 34, a commuter from East Rockaway, endured so many LIRR disruptions that she designed a bag that reads “Customers should expect delays and cancellations.” When she posted a photo of it on the “Long Island Fail Road” Facebook group, “the comments started pouring in from people who wanted a bag,” Vesce Roddin said. “So I decided to take orders and sell them.”

Bags cost $15 and can be bought using cash or Venmo, a mobile payment service.

Vesce Roddin, communications manager for a Manhattan performing arts group, said making a profit is not “in any way” the goal.

“As commuters, we have zero voice, and the bag is a totally silly way to feel like we can express ourselves and are being seen and heard in some way. It creates an odd feeling of solidarity to watch someone wear it.”

Liza Galano, 37, of Centerport Harbor, came up with the idea for an anti-LIRR bag while playing bingo at her daughter’s 6th birthday party.

The mother of two, who works for CBS, thought of creating LIRR bingo cards “to illustrate all of the MTA’s excuses,” such as “Canceled train” or “Rain inside train car.”

She put the design on a bag, ordered one for herself, posted a photo on Facebook and is now taking orders: two bags for $15 or one for $7.50.

She anticipates the price will drop once she orders them in bulk from an online retailer.

Galano also made 300 “WTF: Long Island Fail Road” pins, which she and two other commuters, Scott Abel and Jenn Triquet, have been distributing at train stations in exchange for donations. It cost $35 to make 100 pins.

“Some people give us $5, others give us $20,” she said. “People are so passionate about their hatred for the LIRR.”

Allyson Cerutti, 36, of Melville, a project manager at Nickelodeon who commutes to the city five days a week, ordered an “Expect Cancellations” bag online and picked it up from Vesce Roddin at Penn Station.

“Deirdre’s idea is a great way to make a statement in a nonviolent way,” she said.

10 ways to get live LIRR news, alerts from Newsday

“Why not use fashion to say something meaningful? And make money as well?”