LIPA, again at a crossroads, considers four options for its future

With five years to go before its state-brokered contract with PSEG expires, the Long Island Power Authority again has a monumental task ahead: It must decide how best — or whether — to go forward with an electric utility plagued by new claims of mismanagement.

After a string of devastating revelations about PSEG Long Island’s failures in its handling of Tropical Storm Isaias, LIPA officials and its board disclosed they will begin to look at options for how best to run the system, which stretches from the Rockaways to Montauk with 1.1 million customers. The move follows disclosures in a LIPA report this month that PSEG knew in advance of problems with a computer system that crashed as the worst of Tropical Storm Isaias hit, leaving 535,000 customers without power or answers about when it would be restored, some for more than a week. 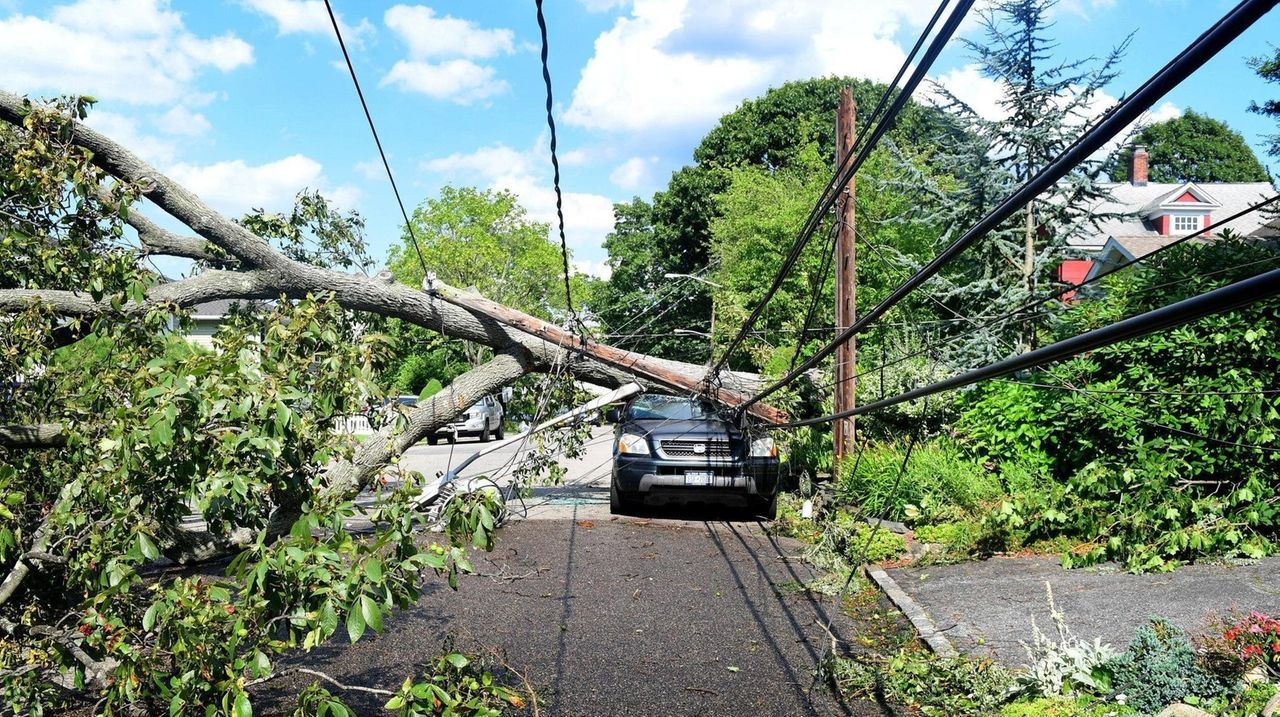 LIPA considering options for future structure After a string of devastating revelations about PSEG Long Island’s failures in its handling of Tropical Storm Isaias, LIPA says it will reexamine how best to run the system, which has 1.1 million customers. Here's Newsday's Mark Harrington with a closer look at the story. Credit: Newsday / Mark Harrington, J. Conrad Williams Jr,; File footage

It’s not the first time LIPA has been at this crossroads. The utility and the state have commissioned studies as recently as 2013 to determine the next best path for an electric system plagued by soaring debt, eye-popping bills, antiquated infrastructure and periodic charges of mismanagement by big-name contractors.

LIPA Chief Executive Tom Falcone, who has been scathing in his assessment of PSEG in recent weeks, said in an interview that LIPA will be closely scrutinizing PSEG’s actions in response to the report's findings. "We’ll judge very carefully how well they do," he said, calling the current situation "urgent." But even as that scrutiny takes place, LIPA will begin a longer-term review of all its options, including municipalization, he said.

Falcone was first to broach the idea that LIPA could chop up the current contract into several smaller ones and hire the best companies in the field to do the work. He noted that was the case for the information technology systems when the contract began, with a big portion of the back-office computer systems handled by Lockheed Martin. PSEG, he noted, soon subsumed that work.

"Maybe it’s not great to have everything in one basket," he said. "You can divide the contract in pieces" and bid out those to the most qualified, lowest-cost company. Falcone suggested PSEG would not win the bid for computer system services.

PSEG’s information technology services "stink," he said. "If you hired IBM and they performed this poor service, you’d fire them."

National Grid and its predecessor, KeySpan, were the companies behind the LIPA brand from 2007 through 2014, when PSEG took over following National Grid's much-criticized performance after Superstorm Sandy. LIPA as a public authority has directed outside management of its power-line assets starting in 1998.

Before that, the Long Island Lighting Co., or LILCO, owned and operated the utility as an investor-owned company subject to full Public Service Commission jurisdiction, and also received scathing reviews for its performance after storms, among other criticisms. The PSC oversight structure went away when LIPA bought the assets.

It returned in lighter form following Cuomo's LIPA Reform Act of 2013, which gave a Long Island Department of Public Service office an unprecedented "review and recommend" role at LIPA, which is overseen chiefly by its nine-member board of trustees.

In the letter to LIPA's chairman earlier this month, Department of Public Service investigations director Joseph Suich recommended LIPA evaluate terminating the PSEG contract — and certainly not renewing it when it expires in 2025. One of the main reasons that idea failed when LIPA last considered it at Cuomo's urging: LIPA would lose eligibility for potentially billions of dollars in Federal Emergency Management Agency funds that the government pays to utilities before and after storms.

LIPA, after 2012's Superstorm Sandy, received more than $1.4 billion in federal funds, including $730 million in storm-hardening dollars that PSEG Long Island employed to strengthen the system. (The other $700 million-plus went to cover LIPA’s costly restoration from Sandy.)

"As long as there needs to be a public pass-through to ensure Long Island is eligible for federal dollars, a full privatization option is out," said Kyle Strober, executive director of the Association for a Better Long Island, a regional economic development advocacy group. "We learned firsthand how important federal assistance can be after Superstorm Sandy."

Some say it's too soon to cut the PSEG cord. John Cameron, chairman of the Long Island Regional Planning Council, said while he was disappointed by PSEG’s response to the storm, he believes the company should be given a second chance to prove itself, and LIPA should "hold their feet to the fire" to make sure PSEG fixes everything that’s broken. If beyond that, PSEG continues to have problems, he said, he would favor hiring another private-sector company to take over the contract.

"The private sector, if held accountable, offers the greatest opportunity for a cost-effective solution, with metrics that have to be met," he said. "There are other companies out there" besides PSEG, but "I’d recommend they be given another opportunity to prove to LIPA that they’re ready and can respond."

"We will work with LIPA and the Department of Public Service to address the recommendations in LIPA’s 90-day report and to regain the trust and confidence of LIPA," she said, adding PSEG is "committed to continuous improvement, transparency and accountability. We know that real action is needed and needed now."

Kevin Law, a former LIPA chief executive and now president of the Long Island Association business group, cautioned against a "rush to get rid of the current [public-private] model," which he said offers the "best of both worlds" — eligibility for federal grants and the supposed benefits of a nimble, privately owned company. "I'm not sure just changing the team jerseys on employees is going to improve the overall service," he said.

Law said even the notion of replacing PSEG in the existing model is fraught with risk, given that many of the possible replacements, including Con Edison, are already under state scrutiny for poor performance during the storm.

LIPA needs to give PSEG a chance to say "what happened, how it happened, and how they will make sure it won't happen again." And he said regardless of the system chosen, "Long Island will always be vulnerable to storms, because we jut out into the ocean, and Long Islanders love trees."

Seven years ago, the Moreland Commission empaneled by Cuomo initially decided the only risk of a fully privatized utility was that it would be a "complex transaction" that would "take time to execute." Cuomo’s commission found that privatization provided for a "more efficient operation" that would "create cost savings" through more efficient operations and maintenance, and a reduced need for outside contractors. It would also, they said, make the company "subject to PSC oversight of rates and service quality."

A municipal utility, the state found, was out of the question because it was "highly questionable" ratepayers would regain confidence in LIPA. The state also objected to adding 2,000 employees to an "already overburdened" state employee benefit system.

But municipalization seems to be gaining new interest, given LIPA’s history of working under costly contracts with outside companies that sent profits to parent companies off Long Island, while failing at the most mission-critical times.

Its trustees have asked LIPA to report back on all the options, and it could have some recommendations by the time the 180-day report is due, three months from now. Falcone said "all options," including municipalization, "are viable alternatives."

Nassau Industrial Development Agency chairman Richard Kessel has some idea of the options and tough decisions LIPA faces. He ran the utility as chairman from 1989 through its acquisition of LILCO assets and its agreement to work with KeySpan to operate the utility, up until 2007, when he moved to the New York Power Authority. Kessel said he considered it a "healthy exercise" to look at all options but cautioned LIPA about the prospect of dividing the work among numerous subcontractors.

"Be careful about breaking it up into too many pieces," he said, even if operationally. "It could lead to problems. You don't want to create a jigsaw puzzle that you can't put back together."

Kessel said he and others favored the idea of a fully municipal LIPA at the time former Gov. George Pataki was looking for ways to structure the takeover in 1997. Pataki, he said, "was ultimately more interested in taking it private." The public-private partnership was the solution.

Still, Kessel said, "We were very interested" in a fully municipal utility, without the gas portion of the business. It could have included the power plants, along with the core transmission and distribution system. In the end, the plants went to KeySpan (National Grid now owns them) while LIPA owns the grid — the wires, transmission towers, poles, substations and the customers. National Grid owns the Long Island gas operations after buying KeySpan.

One big proponent of full municipalization is LIPA trustee Matthew Cordaro, who was both a former executive vice president for LILCO and was chief executive of a fully municipal utility, the Nashville Electric Service.

"It’s the easiest way," said Cordaro, who also was a chief proponent of full municipalization when the Moreland Commission was studying options. "It’s also the cheapest way to go."

Cordaro dismissed as "baloney" the commission’s ultimate finding that bringing on 2,000 workers to the state system was a burden, noting that ratepayers are already paying all those same retirement costs, only into a separate PSEG-managed retirement system. LIPA could transfer the 2,000 unionized employees, now employed by PSEG, to a separate entity under municipal authority. The unionized PSEG employees do everything from answering customer calls and billing to maintenance operations and high- and low-voltage line repairs.

It could also hire an expanded team at LIPA to pick up the management now done by the 20 or so top PSEG employees, while eliminating PSEG’s annual $78.4 million management fee (plus up to $10 million in an incentive bonus).

Cordaro said legislation might be needed to make LIPA a county-controlled entity rather than a state one, with Nassau and Suffolk governments appointing equal numbers of trustees to the board. Under the existing structure, the governor appoints five of LIPA's nine trustees, with the Senate and Assembly getting two each. LIPA could even sell off the Far Rockaway portion to Con Edison or another entity to fund the transaction or to lower rates.

"That’s the way most public power companies are run across the country," Cordaro said of city- and county-centric municipal utilities.

Such a model would eliminate the profit motive of PSEG or any other investor-owned company.

"Their whole purpose and their charter is to make as much money as possible for their stockholders," he said. "A public utility’s mission is to provide clean reliable energy at the lowest possible price."

Assemb. Fred Thiele (I-Sag Harbor), a frequent LIPA critic who has long pushed for more oversight, agreed that municipalization makes the most sense, chiefly because "none of these hybrid private operator models have worked."

"I have always favored the public power option," Thiele said. "It's never been given a real chance … none of these hybrid private operators' models have worked."