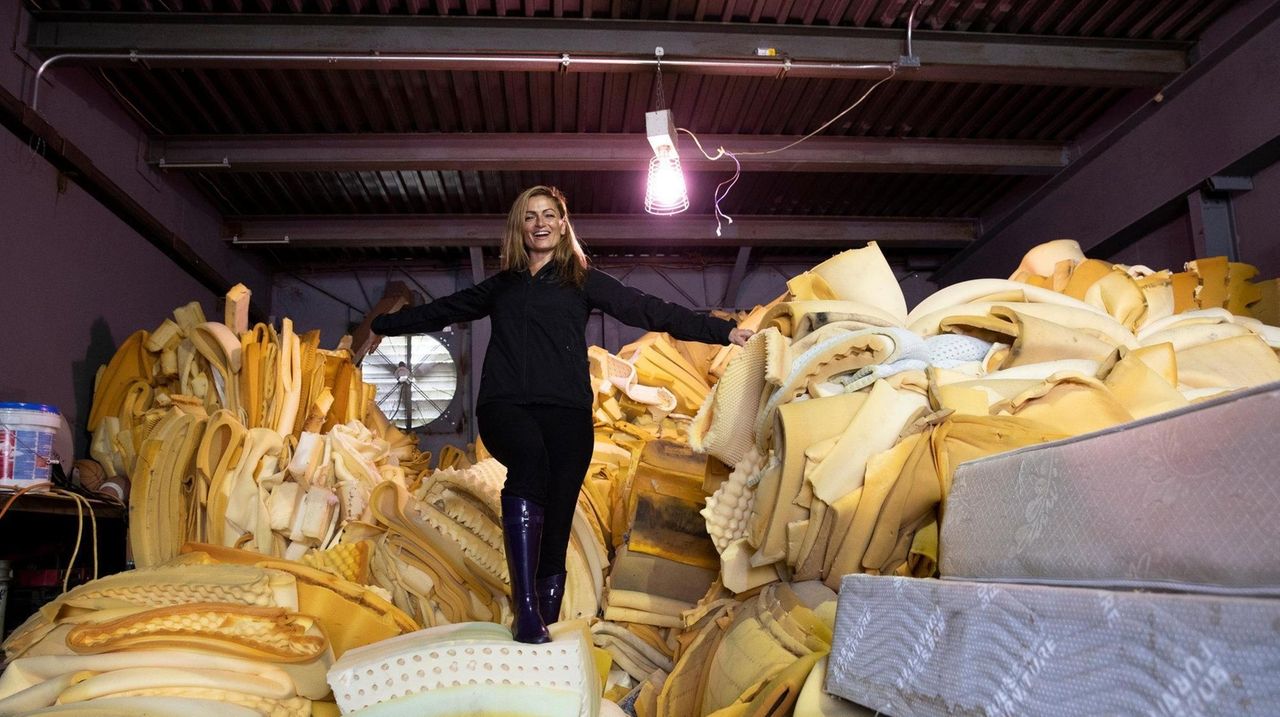 Founded in Oct. 2014, Renewable Recycling Inc.'s mission has been to "save the Earth one mattress at a time." On July 23, founder Christine Kiourtsis talked about her mattress-recycling company and the programs she has created with local municipalities. She said her vision is to ensure that mattresses never again wind up in landfills in New York State, but rather get recycled and repurposed. Credit: Michael Owens

Christine Kiourtsis got the first bit of inspiration for her mattress recycling business when walking through her East Rockaway neighborhood. On a bright spring day, soiled mattresses and box springs strewn over an open field marred her view of Bay Park.

“I thought, this has to be dangerous,” Kiourtsis said.

Five years later, Kiourtsis, 46, saves hundreds of mattresses annually from ending up in landfills with the help of a six-member crew. The Lynbrook native owns and operates Renewable Recycling Inc., a recycling company and waste transfer station that helps towns, hotels and other companies unload mattresses.

“I believe we can make the earth better, one mattress at a time,” she said.

The company has bulk-waste contracts with the Town of Hempstead and agreements with several hotel chains in New York City, according to Kiourtsis. It has reclaimed more than 1,700 tons of mattress materials since it started in 2014.

More than 85 percent of mattress components are recyclable, according to the Mattress Recycling Council, based in Alexandria, Virginia.

In June, the company hauled away nearly 1,000 twin-size mattresses from Stony Brook University as the school spruced up some of its dorms.

Currently there is no legislation that mandates mattress recycling on Long Island, but Stony Brook makes it a policy to change mattresses in dorms every five to six years, according to Lisa Gumbman, assistant director of residential financial services.

More than 50,000 mattresses end up in landfills every day, and do not easily biodegrade, according to the Mattress Recycling Council. Kiourtsis said it takes 90 years for them to decompose.

“Our landfills are saturated,” Kiourtsis said.

In Renewable Recycling’s 2,000-square-foot warehouse in Oceanside, employees strip each mattress down to its wire coils. Mattress technician Gregory Mojica, 19, of East Rockaway said he starts his workday as early as 7:45 a.m., unloading mattresses and carting them into the warehouse to be deconstructed.

He uses a box cutter to slice open each mattress, and then removes the foam, cotton and wool shoddy (padding) and metal coils by hand. Mojica said he has dismantled more than 50 since joining the company a year ago.

The company, which Kiourtsis said recently turned from break-even to profitable, earns revenue on both ends of the deal.  The firm charges hotels, universities and other bulk suppliers from $6 to $14.50 per mattress, depending on volume and whether they are dropped off at the warehouse or the firm picks them up.

The company also offers mattress pickup for individuals on Long Island and in New York City, priced from $35 to $90 depending on the distance.

Employees bundle and bale the reclaimed materials, which are sold to vendors by the pound. Prices for the foam, cotton, wool and metal fluctuate depending on market conditions, with average rates ranging from 7.25 cents to 13 cents per pound,  Kiourtsis said.

The company salvages approximately 425 tons of re-purposed materials per year.

In July, the company donated 100 of the mattresses from Stony Brook University that were in good condition to Open Door Exchange, a Setauket nonprofit that offers free furniture for those in need.

Mattresses are the most requested item, said the nonprofit’s director, Kate Jones Calone. “Many of the mattresses go to children, and ensuring they get a good night’s sleep means better productivity in school,” she said.

California, Connecticut and Rhode Island are the only states that have enacted laws encouraging mattress recycling.

What it does: Recycles mattresses