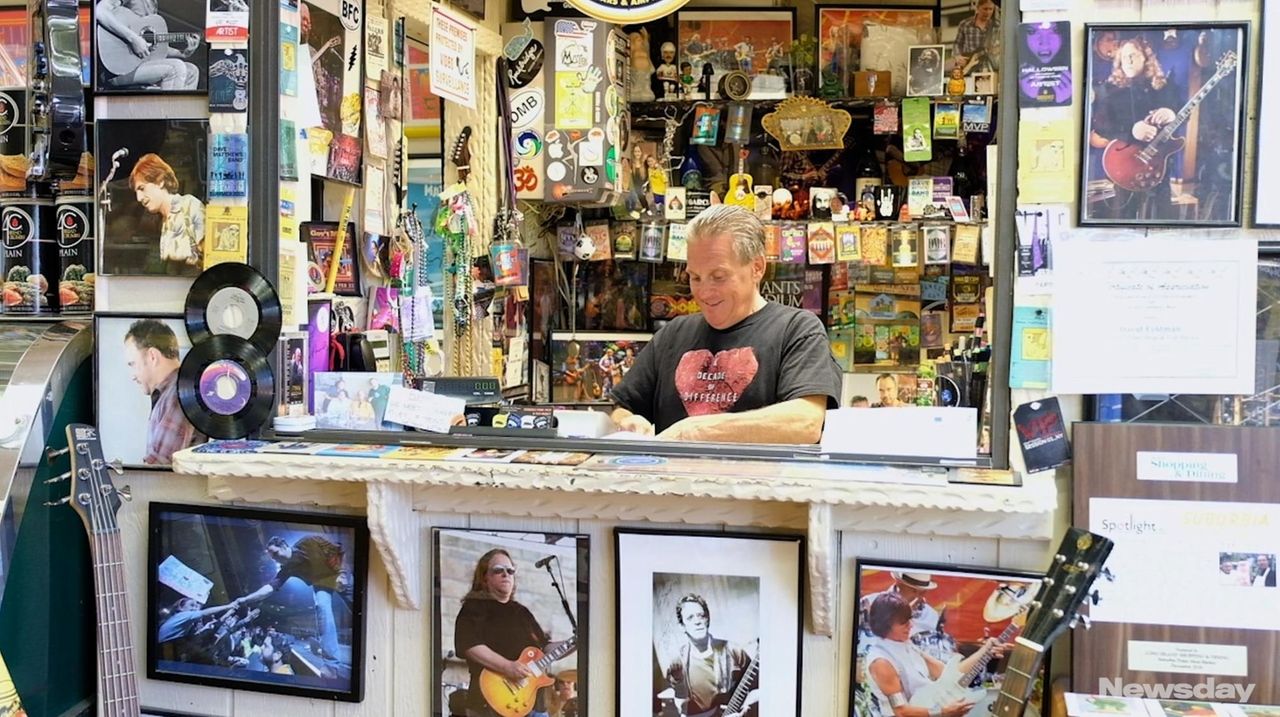 David Feldman, owner of Suburbia Prime Meat and Fish in Merrick, seen here on May 24, discussed the rock-and-roll memorabilia he has been collecting since he was 13. Credit: Jeff Bachner

Tom Nizza’s favorite part about taking the family’s Electrolux vacuum cleaner to the repair shop has always been the golf clubs.

“The golf clubs! You mean to tell me your vacuum repair shop doesn’t sell golf clubs?” Nizza, 69, of Merrick, says.

For the past 17 years he’s been a customer of A-Merrick-A Vac vacuum repair, a 1,200-square-foot shop in Merrick where equipment for both — vacuum cleaners and golf — line the walls.

Experts often advise that small-business owners should avoid confusing customers and focus on one signature line of work, equipping their workplace in a sober, professional manner. Some Long Islanders toss such advice to the side, mixing their businesses with a hobby or private activity they love and helping their shops in the process. Sometimes the hobby also is a business, bringing in revenue; in other cases it's more of a memorable marketing tool.

Walk into Food & Fun, a small West Babylon deli across the street from a cemetery, and you quickly run into a floor-to-ceiling-sized statue of the Hulk.The deli sells a wide assortment of '70s- and '80s-era collectible toys, many comic book superhero-themed, along with pizza and chicken wings.

And customers of Suburbia Prime Meat and Fish Market, in Merrick, can listen to music from classic rock bands like the Grateful Dead, check out a book or vinyl record from the store's rock-and-roll lending library or admire dozens of limited-edition concert posters hanging on the walls while they wait for their beef, cold cut or potato salad orders.

“All of these businesses sound magical,” said Martin Lewison, assistant professor of business management at Farmingdale State College. “And not just from a consumers’ standpoint but in that, through these passion projects, their owners seem to have mastered the work-life balance we all dream about.”

Lewison, who teaches marketing at Farmingdale State, said that in marketing there are two "plain-vanilla" strategies: compete on price or compete on differentiation.

Making your business stand out in the customer's mind “is more appealing than ever, especially in today’s economy, where it’s harder for physical stores to compete,” he said.

But Zachary Johnson, academic director of Adelphi University’s Willumstad School of Business, says that while he commends these entrepreneurs for merging their passions with their work and crafting an authentic brand for their businesses, what they’ve achieved is no easy task for most business owners.

“These businesses work, but they shouldn’t,” he said. “By linking specific aspects of their personal identities to their businesses, these entrepreneurs have taken a risky approach in that consumers may not see the pairing as a logical fit.”

Johnson warns doing so can sometimes get messy and come off as unprofessional.

“And with too many categories or offerings, your company can get cluttered in the minds of consumers.”

He repaired his first vacuum cleaner when he was 14, and took over his father’s shop in his early 20s.

His cousins own a vacuum repair shop in Florida, and his Uncle Vince was once a "bigwig" at a company whose name is almost synonymous with the vacuum cleaner, Hoover Co., now based in Ohio.

And golf? That’s always been his thing.

Rogers, who said he's played "about a couple thousand rounds" to date, says spending time on the golf course is what he imagines heaven would look like.

He fell in love with the sport the first time his mother took him to play the game at Eisenhower Park. He was 10 and hasn't stopped playing since.

But it wasn’t until 2001, after an unexpected interaction with a customer, that Rogers began combining business and pleasure.

“I had taken one of my golf clubs with me to the shop because I needed to change out the grip,” Rogers said. “I had it right up against the counter when a lady walked in with her vacuum and saw it.”

The woman asked Rogers whose clubs they were. When she learned what Rogers was doing, she asked if he could change the grips on some of her golf clubs.

“She took the golf clubs in her hands and she was just so happy! She was like a kid at a candy store. And I was like, really? I can do that? In a way, I was hooked.”

He invested about a $1,000 to refit the backyard of his shop with a putting green and added a net so he could teach golf lessons there.

For customers like Tom Nizza, who said some of his most memorable times at the shop have been spent in the backyard, the investment has paid dividends.

"There was a time I was having a series of bad games. I mean, I was just playing so poorly. And so I came in and hit a few balls, and Timmy was quickly able to show me what was wrong with my game. It was fantastic,” Nizza said.

Rogers charges $50 an hour for each golf lesson. But he says spending time on the green is not what puts the most green in his pocket.

“This is mainly just for the love of it,” he said. “The golf business is seasonal, the vacuums one is year-round.”

Rogers said about 500 customers buy golf equipment and take lessons at his shop each season. By comparison, he services the vacuum cleaners of about 5,000 customers a year.

Just not on Wednesdays. "I close and go play golf," said Rogers, whose handicap is 11.

Judine Federici, who for almost a decade worked as executive chef at Manhattan's famed Serendipity restaurant, has always been torn between her two great loves: food and comic book superheroes.

In 2004 she decided it was time to put all of her favorite things under one roof by opening Food & Fun Deli at 1228 Wellwood Ave..

Since then, the deli, with its larger-than-life statues of Marvel comic book superheroes like the Hulk, Thor, Batman, Spider-Man and Superwoman, has become the haunt of customers who are in search of that special hard-to-find toy.

“For me, it was important to open a deli that served delicious, homemade food, of all ethnic backgrounds, because that’s what I like to cook and what I like to eat," said Federici, 57.

"But at the same time, for it to also be a place where I could showcase and sell collectible, superhero-themed toys like the ones I loved playing with so much when I was growing up.”

Federici said many customers are men who are looking for toys they played with when they were little boys.

“It’s usually a car, especially Hot Wheels or Aurora cars,” she said. “And most will put it on a layaway plan with me because they don’t want their wives to find out that they’re spending anywhere from $100 to sometimes close to $300 on a toy they played with when they were 5, 6 or 7 years old.”

Jessica Sura, manager of Food & Fun Deli, says not all customers are regulars looking for a specific item.

“We’re located across the street from a cemetery and near a few others, so many people who come in are people who just went to a loved one's funeral and are wanting to grab a quick bite or a bottle of water,” she said.

“They open the door and come inside and just look around in wonderment, and we say to them, ‘Hi, can we help you?’ and they ask, ‘Is this the deli?’ with a confused look on their faces. So we tell them, ‘Yes, the food’s right around here.’ Others ask, ‘Is this a deli or a toy store?’ Well, it’s both.”

Inside Federici’s Food & Fun Deli, the thousands of small and large collectible toys on display, most of them in glass cases, are for sale.

A '70s-era "Masters of the Universe" lunchbox hanging from the ceiling sells for about $175. Federici said other vintage lunchboxes go for as much as $750.

“If I don’t want to sell it, I don’t bring it in,” she said. “Anything you see here is the overflow of my collection at home.”

“It makes me happy just to hear people who walk in reminiscing about this toy or that toy,” she said. “And if they’re not interested in those types of heroes, they’ll be more than likely to walk out with the other type. People walk in for the toys, but they stay for the food.”

When Dave Feldman took over Suburbia Prime Meat and Fish Market, his father-in-law’s butcher shop, in 2009, he decided to do things his way. And that included scrapping Ol’ Blue Eyes from the ambient music playlist at the shop, located at 2056 Merrick Rd.

His father-in-law was not on board, Feldman said.

The father-in-law worried that changing the store would ruin the business. “He says to me, ‘How is this going to work? How are you going to make money?’ ”

It wasn’t just the music. Feldman started to customize the shop’s appearance almost immediately, changing the wall paint from dark to light and bringing in boxes upon boxes of vintage rock-and-roll posters and memorabilia, including five guitars he had in his basement. He now has 14 guitars in the shop.

He also ditched the shop’s business card for a guitar pick with the shop’s logo and contact information printed on it. He set up a rock-and-roll lending library, where customers can take turns checking out vinyl records or biographies of rock greats like Janis Joplin.

“This happens to be my man cave that I just work at,” he said.

Feldman said he almost didn’t graduate high school because he would often skip class to follow the Grateful Dead on tour.

“A lot of the concert posters you see here come from those adventures,” Feldman said. “I have about a hundred of them that aren’t even framed because I have no room. The ones I have up, I love having here because when I see a specific poster, it just brings me back to that time right away.”

The concert posters that line the walls of Suburbia Prime Meat and Fish Market and the rest of Feldman’s rock-and-roll memorabilia collection are insured for $300,000, he said, adding that many of the posters, signed by the artists, are irreplaceable.

Feldman’s posters are, however, not for sale. He said customers constantly ask him to price specific pieces, but he refuses.

“Everything is for sale, but none of my stuff is for sale,” he said, laughing. “These are my memories, what I’m passionate about, you know . . . my life.”

Feldman says surrounding himself with all of his favorite things make his 10-hour workdays fly by.

And how does it help customers?

The atmosphere is “more than a marketing tool, though we do get many, many referrals from word-of-mouth recommendations. I think more than that, it’s a softening tool,” he said. “A conversation starter between customers.”

Even so, Feldman, wants one thing to be clear:

“At this butcher shop, the meat is the frontman of the band.”