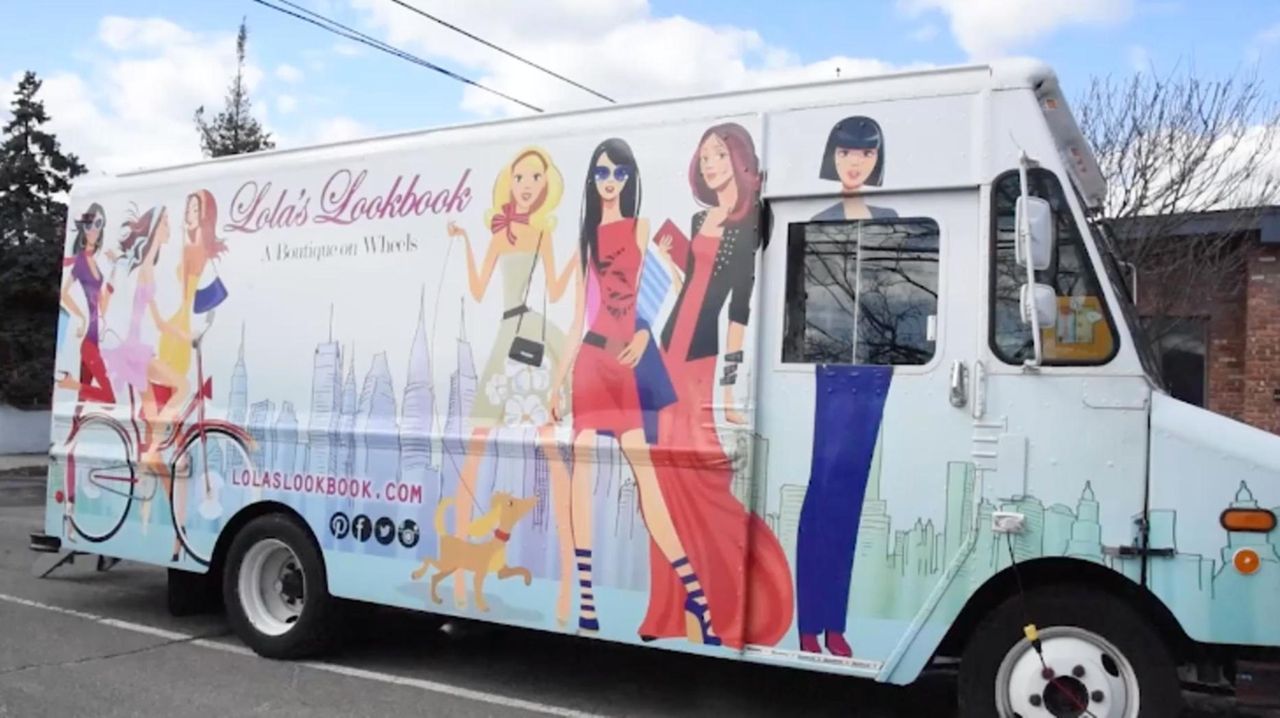 Lola's Lookbook, a fashion-by-appointment mobile boutique, has been selling the latest trends in fashion to Long Islanders for the past four years. On March 23, business owner Ann Marie Inglese talked about her company, which is able to service a niche market: busy women who don't have time to go shopping at the mall. Credit: Danielle Finkelstein

While a variety of businesses make house calls, these mobile enterprises make it possible for people to shop, work out, have their cars fixed or get their hair done while at work.

A UPS-sized truck-turned-fashion boutique, based out of Amityville, caters to women whose hectic work schedules leave them little time to shop.

Fitness franchises, like one headquartered in Plainview, vow to eliminate the “no time to work out” excuse by bringing a personal trainer to time-strapped business owners, executives and employees.

Mobile mechanics, based in Hicksville, Stony Brook and other locations, allow employees to work while their cars get an oil change or have new brake pads put in.

And businesses in Bay Shore and Bayport provide on-location hair and beauty services, such as haircuts, blow drying, manicures and pedicures at the workplace.

Erica Chase-Gregory, regional director of the Small Business Development Center at Farmingdale State College, said mobile businesses are in demand, partly because they provide a service for busy consumers who are “only getting busier.”

Full-time workers here “are constantly juggling an assortment of time constraints, balancing professional and personal responsibilities,” Chase-Gregory said. “So for people to be able to use these mobile businesses that are physically coming to them and meeting them where they’re at, is really serving a need: saving time.”

In 2014 full-time employees worked an average of 7.8 hours a day, according to the U.S. Bureau of Labor Statistics’ American Time Use Survey. In 2016 that average increased by nearly 9 percent to about 8.5 hours a day.

A brick-and-mortar beauty salon could cost “something like a quarter of a million dollars” to build, said Sherry Mandel, who opened MobilitySalon.com, a Bayport-based company, along with a partner in 2015. “And then cost about $8,000 a month for rent. We don’t have that expense, so we’re already ahead.”

But there are challenges to mobile businesses.

“People see it as a cool concept that’s fun and attainable and think, ‘I can totally do this,’ ” Jischke-Steffe said. “But in reality ‘mobile’ is a beast in and of itself.”

Mobile entrepreneurs must deal with permit and parking regulations, broken-down trucks, constant travel that can leave them “physically and mentally exhausted,” and other challenges, Jischke-Steffe said.

Personal trainer Mike Lahey, who owned and operated Smithtown-based Mike’s Mobile Gym, said he decided to sell his custom-built trailer and gym equipment after two years in business. Despite having a loyal clientele and making “a couple thousand dollars a month,” he said, high car and liability insurance costs, among other factors, led him to exit the business. He now works at Abbott Laboratories doing spinal cord stimulation for patients with chronic nerve pain.

“It’s definitely a lot of work and can be very stressful,” Jischke-Steffe said. “It’s not for everyone.”

Retail on the road

She bought the business, including the truck, inventory, website and business contacts, in November from entrepreneur Laura Tingwall, who after owning and operating it since 2013 sold it to pursue a career in nursing.

Inglese drives “Lola,” which is filled with clothes racks stocked with trendy graphic tees, little black dresses, and patterned rompers, across the Island.

“This is fashion-by-appointment business,” Inglese said. “If a customer calls me and says, ‘Hey, I have a date tonight and I need something to wear but I’m at work all day, can you swing by?’ I will try my best to accommodate her.”

Public parking regulations for mobile businesses like Inglese’s can be complex, with certain towns prohibiting sidewalk parking, some requiring special permits and others setting time limits on how long a mobile business can be stationed in one place.

And before hitting the road, Inglese said she first checks in with property management to obtain permission to be on the premises.

Inglese, who also sells at pop-up fairs, home parties and through the company’s website, said most employers are happy to see the colorful truck drive up.

“They had a nice time, got some fabulous outfits and then went right back to work, so it was a quickie little perk that’s good for the employee and good for the company,” Fey said.

For David Rubenstein, a customer of Plainview-based fitness franchise GymGUYZ, the demands of running a business made fitting fitness into his routine difficult.

That changed when GymGUYZ personal trainer Heidi Loiacono started meeting him early in the morning at his business, Five Corners Hand Car Wash in New Hyde Park. Loiacono arrives once a week with dumbbells and jump ropes in tow for a one-hour session.

“It’s just so easy and convenient to have them work around my schedule and train me here at work,” Rubenstein said. “And if I can’t make it to the gym the rest of the week, it’s OK because at least I know I got one good workout in.”

“If a client needs one of our trainers to meet them for a quick lunch-hour workout at the office, we’re there,” York said. “They want to work out super early before starting their work day, we’re there. We come to you, we bring all the equipment. It’s simple, no hassle.”

The GymGUYZ franchise operates in 200 locations in the United States and Canada and will soon expand into Mexico, York said. It was listed among the Top 20 New Franchises in 2018 by Entrepreneur Magazine, which rated franchises based on costs, fees, size, growth, franchise support and other measures.

On Long Island, the company has about 40 employees and two franchise holders, one covering Nassau and some parts of Suffolk, and the other the East End.“Our first year in business, I had 20 clients. We now have 25,000 clients throughout the franchise system, and about 4,500 of those are on the Island,” York said.

Individual training costs about $60 to $90 per hour, depending on how many sessions are purchased. Group training can cost $45 to $60 per person, and corporate classes can cost as low as $10 per person.

Corporate accounts have helped fuel the growth of York’s company.

Ted Panebianco, owner of junk removal and moving company College H.U.N.K.S. Hauling Junk & Moving in Bohemia, has a GymGUYZ trainer host an hourlong workout for 10 of his 60 employees once a week.

“In the past we tried to set up corporate memberships at local gyms for some of our employees and failed,” Panebianco said. “The junk removal and moving business can have high turnover, so it became extremely difficult having to commit to a gym contract that was set in stone for a specific individual . . . It’s important for us to make sure that our employees are healthy and fit and that they can properly lift and gain endurance so that they don’t get hurt on the job.”

Mechanics on the move

Adam Lukasik was too young to drive when he started repairing cars. Now people across Long Island pay the state-certified mechanic to drive to their jobs and fix their rides.

Since then he’s worked on more than 4,000 cars in residential and commercial driveways and corporate parking lots. Recently, he said, demand for repairs at people’s workplaces has increased.

“I get a lot of calls from people who are just too busy to take their car to the shop,” Lukasik said. Convenience, he said, is “what keeps us busy.”

Lukasik charges a travel fee of up to $120 to get to the East End. But he discounts or waives the fee for other parts of Suffolk or when he services multiple cars in one location.

Michael Sparks, an investment specialist at insurer MassMutual Greater Long Island in Melville, was one of Lukasik’s early customers.

“Adam usually comes into the office, and I just hand him my keys,” said Sparks, who said he works about 50 hours a week. He leaves his keys with the receptionist if he plans to be in a meeting.

Sparks said that when his co-workers know Lukasik will be on the premises, they want work done on their cars, too. So Lukasik often works on three or four cars in the MassMutual parking lot that day, using drip pans and tarps to avoid leaving oily messes.

Serving multiple clients is “the case at many workplaces,” Lukasik said.

Lia Giovanniello, co-owner of Bayport based Mobilitysalon.com, said demand for her company’s on-site beauty and hair services has “exploded” in the last two years.

The business’ licensed cosmetologists, who are independent contractors, travel from Malverne to Montauk, working around clients’ schedules to beautify them at their homes and offices.

On-site services range from a quick up-do or blowout to a manicure and pedicure or a massage.

“Professional women on Long Island are very busy,” Kaur said. “It’s not easy to carve out time to go out and get beautiful.”

Kaur, a licensed cosmetologist who for eight years worked at several beauty parlors, has been taking the salon to Long Island clients, offering hair cuts, blowouts and even airbrush makeup on site.

She often travels to Jamaica Hospital Medical Center in Queens to provide hair services to nurses on lunch break, who she said “wouldn’t otherwise go to the salon.”

“All I need is an electrical outlet,” Kaur said. “And I can make the magic happen. I’m all-in-one. They don’t have to go anywhere.”