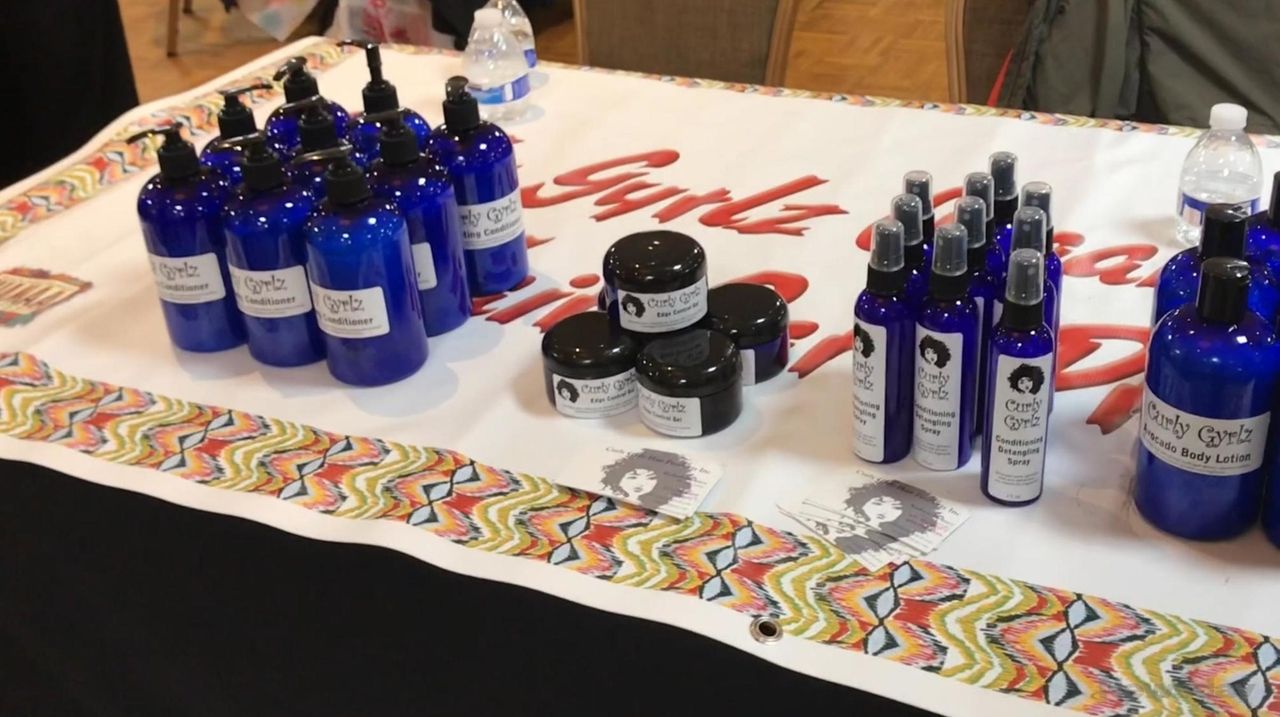 The Got Curl Expo 18, the first natural hair care expo on Long Island, took place March 31 at the Holiday Inn in Plainview.  Event founder and Huntington resident Victoria Stanton organized the expo because there is an untapped market on Long Island, she said.   Credit: Newsday / Tory Parrish

The last time Kandice Rogers had her hair chemically straightened, or relaxed, she was left scarred — literally.

That was also when she stopped her biweekly visits to an East Northport salon, opting instead to become a do-it-yourselfer who gets hair care tips from bloggers, social media sites and networking groups dedicated to black women’s natural hair care, said Rogers, a Queens resident and Bay Shore landlord.

Rogers is among a growing number of black women who are rejecting hair relaxers— or “going natural” — and going to salons less frequently as they do their hair themselves using tips they learn from friends, family and online.

While the natural hair movement took off in metro areas around the country at least a decade ago, it was slower to hit Long Island, residents and hairstylists said.

And now that it has, hair care professionals on Long Island who aren’t changing with the times by learning to care for natural hair — and offering protective styles that don’t require damaging heat, such as braids, dreadlocks, weaves and twists — are being left behind, they said.

“I worked in many salons and because they don’t evolve, they … are actually no longer,” said Shantelle Joseph, 30, a 12-year hairdresser who works in the Queens Quarters salon, which is inside Kut Kings Barbershop in Bay Shore.

She and some other stylists on Long Island say their businesses are benefiting from the competition shakeout because they’ve taken the time to learn how to service natural hair clients.

Some hairdressers haven’t embraced the natural hair movement because “they were trained to hate it,” said licensed cosmetologist Diane Bailey, who founded a trade association, Emerge: Natural Beauty Industry Alliance, in 2016 in Brooklyn.

“We have been programmed and colonized to hate our hair, our skin color, our lips, our nose. I’m not surprised that some people still do hate it. And that journey is theirs to take,” said Bailey, who has been styling natural-hair clients since the 1980s.

Long Island is behind the curve a little, but its natural hair community is growing and there are highly qualified professionals out there, she said.

The number of licensed cosmetologists statewide is declining, but the state agency does not break out the numbers by specialty, gender or race.

The numbers are falling for several reasons, including cosmetology school enrollment stabilizing following a spike in the numbers during the recession, and high schools pushing students to attend four-year colleges instead of trade schools, said Anthony Civitano, executive director of the New York State Beauty School Association in Hempstead.

Some experts cite the growing number of natural-haired women forgoing salons as another reason for the drop.

Also, while natural hairstyling licenses have been available in New York state since 1993 — and state law requires them for natural hairstylists who charge clients fees for services — many stylists are working from their homes without them.

“People are not getting licensed because they don’t feel they need it,” Bailey said.

In Nassau County, the number of professionals with natural hairstyling licenses dropped from 27 in January 2015 to 19 in January 2018, according to Department of State data. The number remained steady at 12 in Suffolk County during that period.

Some Long Island hairstylists said that though most of their clients are natural now, their businesses are more profitable because those clients often require more services, such as deep conditioning treatments because curly and kinky hair tends to be dryer and more prone to breakage. Some stylists also charge more for certain services, since styling natural hair can take longer.

“If anything, I would say it’s a little more lucrative,” said Alishe Innocent, 41, a hairdresser who works at Viva La Hair in Islip Terrace.

She has received calls from other hairdressers asking her to take on natural clients because they can’t service them, she said.

Offering a diverse range of services in a “destination salon” is the key to salons thriving these days, Bailey said.

While a client whose hair is treated with a relaxer might go to a salon every six to eight weeks to “touch up” new growth and get a trim or color, a natural hair client might opt for more styling and other salon services, she said.

Joseph also said her business at Queens Quarters salon is up — about 40 percent in the last five years — and 85 percent of her clients are natural. Many of them are requesting weaves for their natural hair, she said.

“But the natural trend, it has worked for me,” she said.

They began to decline in popularity about a decade ago, as the natural hair movement was spurred in part by concerns about the health effects of the harsh chemicals in relaxers.

The movement is also expanding due to the cultural push to have curly and kinky hair be recognized as a norm, rather than an exception, particularly in office workplaces.

“Natural hair is about finding balance to nurture ourselves, to develop self-care regimens ... and to find products that will help you accomplish the balance of moisture and hydration to help curly, kinky, wavy hair,” Bailey said.

Also, a growing array of hair care companies, founded by black entrepreneurs, are targeting black consumers caring for their own natural hair.

Amityville-based Sundial Brands, whose personal care products include SheaMoisture and Nubian Heritage brands, was purchased by Unilever in 2017, and Carol’s Daughter, a maker of natural hair and skin products for black women, was bought by L’Oréal in 2014.

Meanwhile, U.S. sales of relaxers in the black hair care market fell 36.6 percent to $525 million between 2012 and 2017, according to Mintel, a London-based market research firm.

Huntington resident Crystal Brown, 45, has been wearing her hair natural for about seven years.

“My hair broke off from the relaxer and I really had no choice,” she said.

She learned to care for her braids and twists in part from trial and error, and social media.

She also is an organizer for a Meetup group, Long Island Naturals, which was founded in 2012 and draws about 25 attendees to its social outings, where attendees discuss natural hairstyling, swap products and network.

She visits a salon once or twice a year now, and she’s OK with the fees being higher for her natural hair because of the time it takes to care for it properly, she said.

“So I’d rather pay more for you to take care of my hair than just to sit in your chair and you break it off,” she said.

Furthermore, Long Island women are tired of having to travel to New York City for these types of events, she said.

“I wanted to bring that to Long Island, and with the response I’ve gotten, I plan on bringing more events here,” she said.