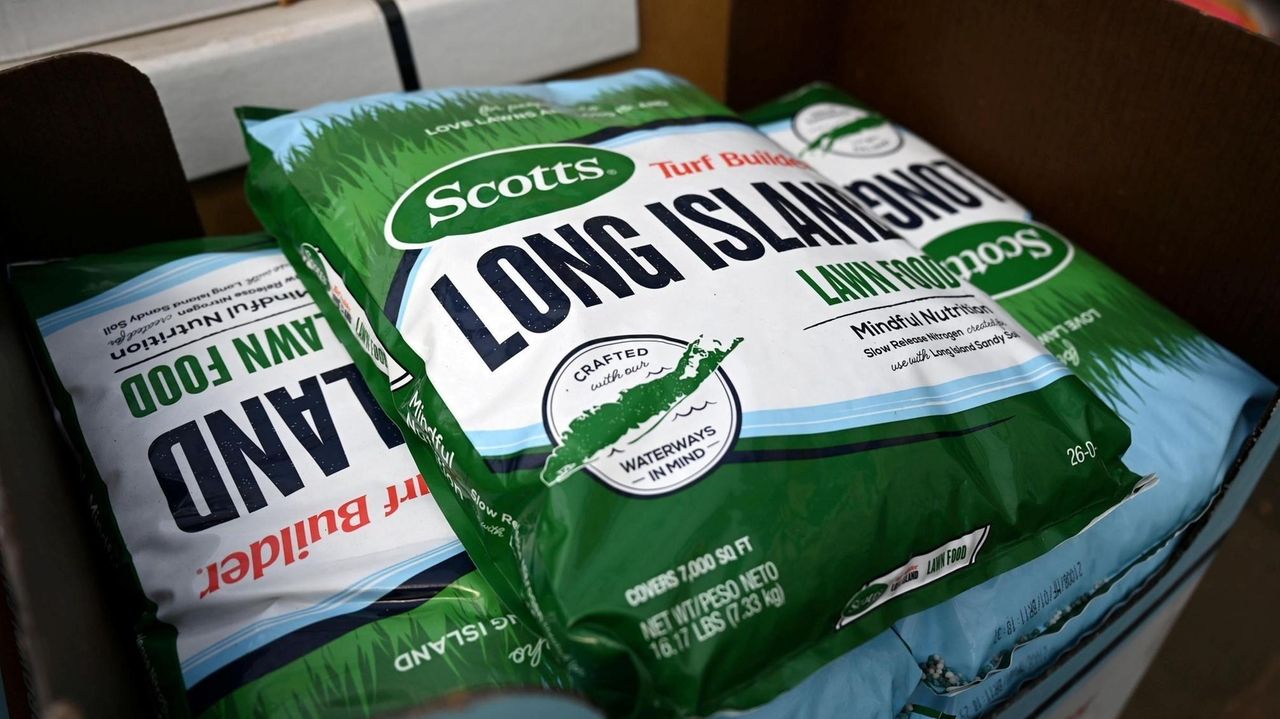 The Scotts Miracle-Gro Co., which sells lawn and garden items, debuted a Long Island-branded fertilizer offered exclusively on the Island this spring. The product releases nitrogen more slowly than alternatives, which ensures more of the nutrient is absorbed by plants, rather than entering waterways. Toxic algae has bloomed in Long Island bays with excess nitrogen.

Scotts Miracle-Gro has long tailored its products for various regions, but it began narrowing its focus in recent years with a fertilizer specific to Florida, according to Mark Slavens, vice president of research and development. When that succeeded, the firm, based in Maysville, Ohio, decided to launch Turf Builder Long Island Lawn Food. That was the first time it has named a fertilizer for a locale — though grass seeds have relied on this branding tactic, Slavens said.

"We look at Long Island as being a very uniquelocale, where people are Long Islanders, and they love being from Long Island," he said.

The firm will donate the profits from sales of the fertilizer — up to $25,000 annually — to North Shore Land Alliance through the end of 2023. That organization is helping homeowners get rebates and other resources for upgrading septic systems, another source of excess nitrogen in local waters.

Scotts Miracle-Gro worked on the fertilizer, which has a recommended retail price of $25.99 for bags that cover 7,000 square feet, for about three years, Slavens said. The company joined landscapers, golf courses, environmentalists, scientists and government agencies in working on the Long Island Nitrogen Action Plan, which released best management practices for fertilizing.

The Turf Builder Long Island Lawn Food contains 20% less nitrogen than other Scotts Miracle-Gro products, the firm said. Half the nitrogen is manufactured to be water insoluble, which means it will be released at a gradual pace. The mix is designed to make it as simple as possible for the average Long Islander to conform with best fertilizing practices, according to Carol Isles, the administrative director of the Long Island Nursery & Landscape Association, who represented the trade group at action plan meetings.

"This product allows us to have both green lawns and blue waters," said Adrienne Esposito, executive director of the Citizens Campaign for the Environment advocacy group. "It’s a great compromise."

Some Long Islanders may be able to cultivate a healthy lawn without fertilizers, according to Tamson Yeh, a pest management and turf specialist with the Cornell Cooperative Extension research and education program in Suffolk County. She said whether nitrogen is natural or synthetic is less important than introducing an appropriate amount of the nutrient at a gradual pace. Scotts Miracle-Gro is a good option, although consumers should still be mindful of using the appropriate amount, on properly setup spreaders, Yeh said.

"If you put down too much nitrogen … it only has one place to go, and that’s ultimately the waterways. It might take 40 or 50 years, but it’s going to get there," said Starkie, who was involved with LINAP. "I don’t want to lose the right to offer people beautiful green lawns, but if people don’t wise up and start reading labels and applying the right amount of fertilizer, the rules could change."

Starkie added that many Long Islanders seem to be getting more conscientious and purchasing organic products. In recent years, Milorganite, a fertilizer made from human waste in which most of the nitrogen is slow release, has outsold similar products.

James Brazel, of Plainview, started using Milorganite last year and set up a Wi-Fi sprinkler system that prevents overwatering. Brazel, an operations manager for the Federal Aviation Administration, said he was motivated by environmental concerns.

He has been thinking about transitioning to exclusively organic products, but was also intrigued by Scotts Miracle-Gro's new Long Island fertilizer while shopping over the weekend.

"It was kind of cool that it was specifically build for Long Island," Brazel said, noting that it was too late to switch his lawn care regimen this year. "My lawn’s only 60 by 100, but maybe I can make a difference."

Tips for a green lawn

All plants need nitrogen, a naturally occurring element, but applying fertilizer to lawns can lead to too much nitrogen seeping into waterways. Here's how to cultivate a healthy lawn, without contributing too much excess nitrogen to local bays, according to the Long Island Nitrogen Action Plan recommendations and Tamson Yeh, a pest management and turf specialist with the Cornell Cooperative Extension in Suffolk County:

•If you plan to use fertilizer, wait until the ground is thawed — April 2 is the earliest the product is allowed on the ground under Suffolk and Nassau law. In the fall, fertilizing must be done by Nov. 1 under Suffolk law and Nov. 15 under the Nassau law.

•Avoid fertilizing ahead of storms or during the summer months when grass is too stressed to grow.

•Pick a fertilizer with at least half the nitrogen in a slow-release form. Packages should carry a box that lists nutrients in the bag by weight. Divide the amount of nitrogen described as slow-release or water insoluble by the total amount of nitrogen to see what portion of the element will be available at a gradual pace — ideally 0.5 or more.

•Read the packaging to see how many pounds of product contain two pounds of nitrogen, the recommended maximum to be applied each year per 1,000 square feet of lawn.

•Measure out the appropriate amount of product and make sure your spreader is properly calibrated. Cornell Cooperative Extension has detailed instructions here nwsdy.li/spreader.

•To reduce reliance on fertilizer, keep grass at three inches and mow regularly so the clippings are no more than an inch long. Leave clippings and leaves, which can be broken up with a mower, on the ground, as a source of nitrogen and water.

•Use a rain gauge to verify the lawn gets about 1.5 inches of water — through rain and irrigation — each week, Yeh said.