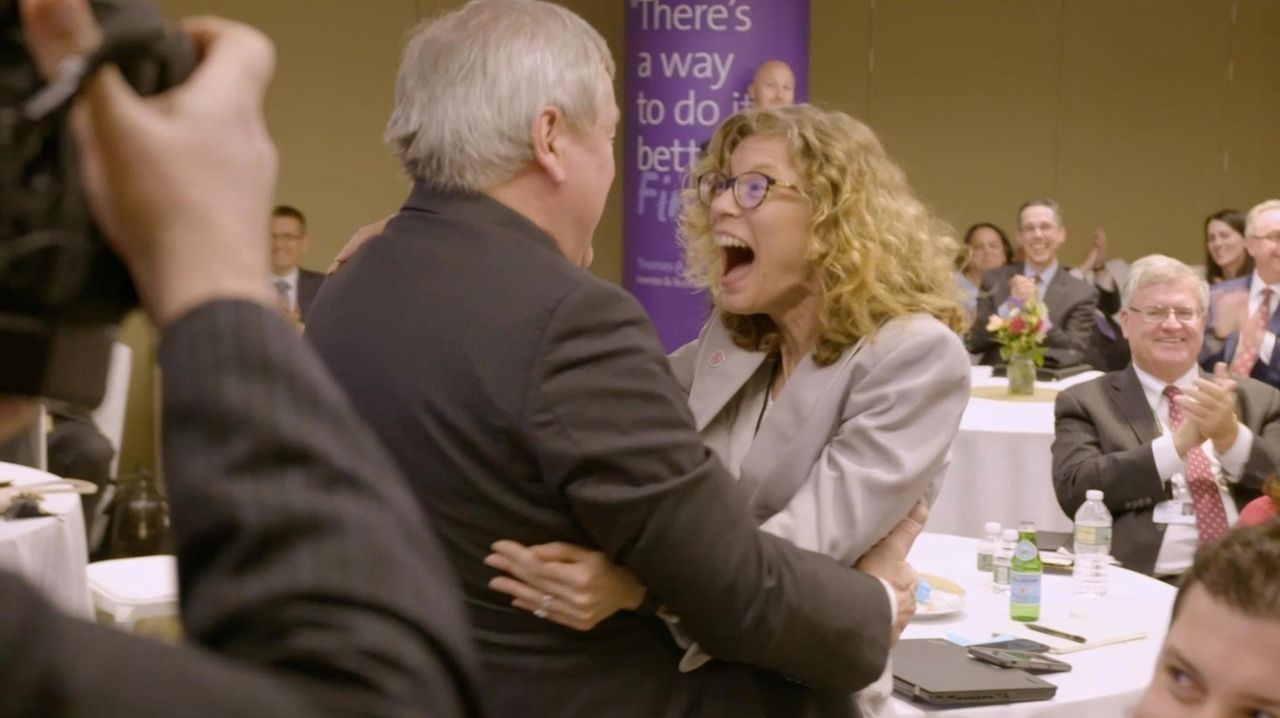 In a competition styled after the reality television show “Shark Tank,” Northwell Health awarded a total of $1 million to two teams of staff researchers — one working on a better way to diagnose a painful condition afflicting one in 10 women, and the other seeking to help doctors and nurses spend less time with computers and more with patients. The winners for first place --  Dr. Peter Gregersen and Christine Metz -- and second --  Drs. Vishwanath Anantraman and Michael Oppenheim -- were announced at a news conference Tuesday, May 15, 2018, at the health system's New Hyde Park headquarters. Credit: Northwell Health

In a competition styled after the reality television show “Shark Tank,” Northwell Health has awarded $1 million to two teams of researchers — one working on a better way to diagnose a painful condition afflicting 1 in 10 women, and the other seeking to help doctors and nurses spend less time with computers and more with patients.

Employees throughout the New Hyde Park-based health system are encouraged to pitch ideas for innovative new products in the staff contest, which is now in its third year.

The contest “is ‘Shark Tank’-like,” Northwell’s chief executive, Michael Dowling, said at a news conference announcing the winners at the company’s headquarters on Tuesday. “People come up with great ideas, business possibilities . . . and they have to present their ideas and defend their ideas.”

Employees had pitched 121 ideas, and on Tuesday Northwell announced the winners. The health system, formerly known as North Shore-LIJ, is the largest private employer in the state, with a staff of about 66,000.

A panel of four judges — including Thomas Thornton, senior vice president of Northwell Ventures, the health system’s venture capital unit, and three executives from outside Northwell — selected four winners who will receive funding from Northwell Ventures for further research aimed at bringing their products to the marketplace.

The top prize went to a team led by Dr. Peter Gregersen and Christine Metz of Northwell’s Feinstein Institute for Medical Research. The group is working on a noninvasive way to diagnose endometriosis, a disorder in which tissue that normally lines the uterus grows outside the uterus. The disease affects roughly 1 in 10 women aged 15 to 44, often causing severe pain and infertility. An accurate diagnosis now requires laparoscopic surgery, and many women suffer for years before finding out what is afflicting them. The researchers are studying ways to diagnose the condition using menstrual blood. They aim to introduce a new test within two to three years.

They faced skepticism when they first described their plans to peers, and they found only a handful of studies on menstrual blood — and none involving endometriosis, they said. “I call it the ‘yuck factor,’ ” Metz said after the news conference, referring to the skepticism. But already, there is evidence that the test they are developing could result in a quicker, easier diagnosis, the researchers said.

The second-place winner was a team led by Dr. Vishwanath Anantraman, Northwell’s chief innovation architect, and Dr. Michael Oppenheim, its chief medical information officer. The group is developing a “chatbot” that would use voice technology and artificial intelligence to make it quicker and easier to record and pull up medical records.

Some studies have found that up to half of a physician’s day “is spent interacting with a computer screen,” with patients feeling like a “third wheel” while the doctor taps away at a keyboard, Oppenheim said. “We’re really trying to figure out better ways for clinicians to get the benefit of electronic storage of information, but not disrupt that human touch, that person-to-person touch.”

Northwell is seeking more participants for its endometriosis study. Those interested can call 516-562-3636 or email rose@northwell.edu.