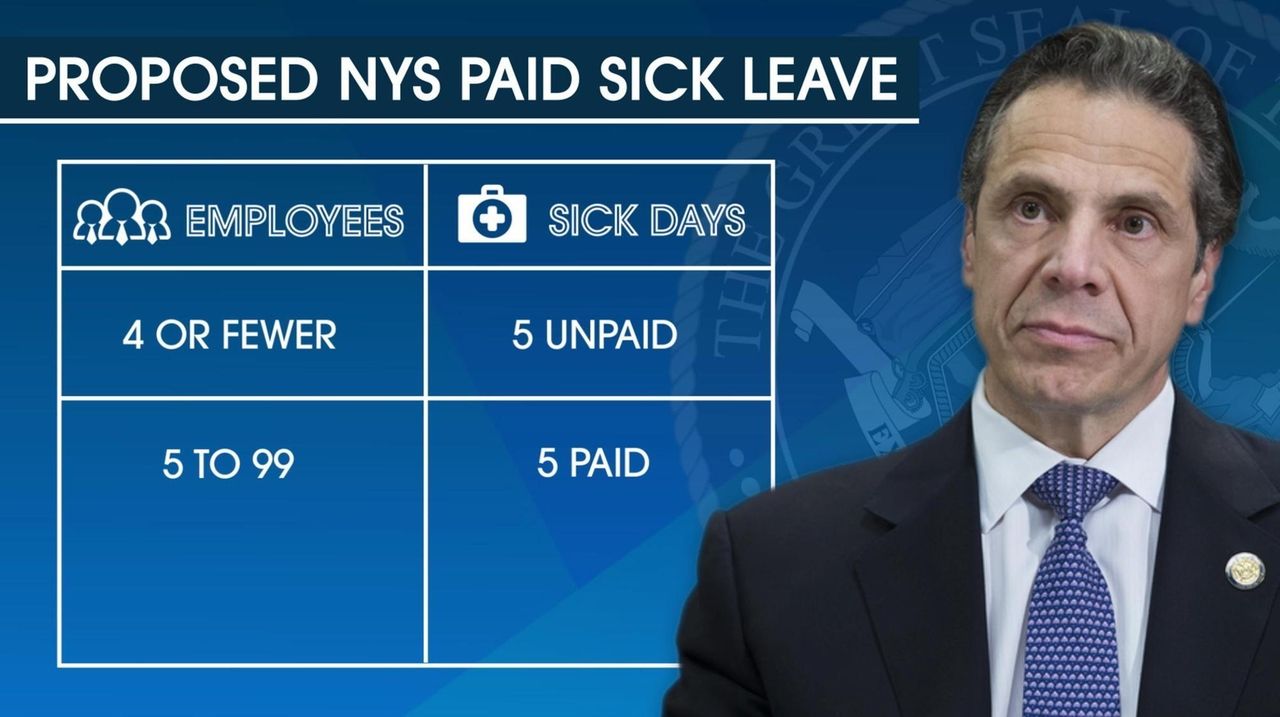 Newsday reporter James T. Madore spoke on Wednesday about Gov. Andrew M. Cuomo's proposal for every worker in the state to have sick leave and he explained what this means for businesses. Credit: Newsday / John Paraskevas

Every worker in the state would have sick leave under a proposal from Gov. Andrew M. Cuomo.

Regardless of whether your job is full time, part time or seasonal, it would come with at least five paid sick days per year if your employer has five or more people on the payroll, the proposal states. Employers with four or fewer workers would have to provide five unpaid sick days a year.

Mandatory sick leave is among Cuomo's proposals for the 2020-21 state budget, which must be adopted by the April 1 start of the state's fiscal year. However, sick leave could pass the State Legislature much sooner because of the coronavirus.

Cuomo said last week he will add a provision forbidding employers from firing workers who are required to stay home in quarantine or isolation because of the coronavirus or other contagious diseases. Employers would have to pay the affected employees. He announced the amendment two days after the first confirmed case of coronavirus in New York State.

In unveiling the initial proposal in January, Cuomo said universal sick leave would benefit both employees and businesses by reducing the spread of germs in the workplace and boosting worker productivity. It also would permit employees to care for ill children, spouses and other relatives.

More than 1 million New Yorkers don’t have paid sick leave, census data show. Many are in low-wage occupations at restaurants, farms and social service agencies, earning under $22,000 per year, according to the antipoverty group Community Service Society in Manhattan.

“Having to choose between my salary and my health is inexcusable in a modern country like the United States,” said Franklin D. Ventura, a Brentwood resident who until this month was employed by two social service agencies. He worked part time for each agency, caring for two disabled men for a total of 44 hours per week.

Ventura, 25, said he has worried for two years about falling ill because the jobs did not provide paid sick time. Also if he is home sick, the men’s parents must take off from work to care for them.

“I support the governor’s proposal because I believe paid sick leave should be a right, not a privilege,” Ventura said.

Opponents of universal sick leave predicted it will lead to pink slips and going-out-of-business sales. They said jobs that don’t come with sick days are entry-level positions and are not meant to support a family or be a lifetime career.

“You are talking about layoffs because paid sick leave would come on top of the increase in the [state] minimum wage and paid family leave, both of which haven’t yet been fully implemented,” said Mario Saccente, president of the Long Island chapter of the New York State Restaurant Association, which represents about 500 independent eateries locally.

He said restaurants typically employ 15 to 25 people, with 80% of them working part time. A handful of full-time employees, including the manager and chef, usually get a couple of paid sick days per year.

“We aren’t making all of the money that you think we are,” Saccente said. “Enough already with these laws that drive up our payroll costs.”

Cuomo’s proposal calls for employees to earn one hour of sick time for every 30 hours worked. The largest employers -- those with 100 or more employees -- would be required to offer the most paid sick leave: seven days a year.

Sick days, both paid and unpaid, could be used for doctor visits, medical treatments and services for victims of domestic violence, sexual abuse or human trafficking. The days could be used by employees to care for themselves or a family member, according to the legislation filed last month.

The legislation “does not require an employer to provide additional sick leave if the amount of leave provided already meets the requirements…or if a collective bargaining agreement [between an employer and a union] expressly waives the requirements and comparable benefits are provided,” said Freeman Klopott, a spokesman for Cuomo’s budget division.

The proposal mirrors the sick leave laws that went into effect in New York City in 2014 and in Westchester County last year.

Nationwide, 11 states require employers to provide sick days, including New Jersey and Connecticut, which was the first to adopt such a mandate in 2011. Still, more than 40 million U.S. workers do not have paid sick time, census data show.

Since 2011, 11 states and some counties and cities have adopted paid sick leave laws.

In Albany, mandatory sick leave could win passage because it is popular with New York City Democrats who control the legislature.

“It’s an election year and sick leave is a great thing to give everybody,” said Frank Kerbein, the human resources and labor lobbyist at the Business Council of New York State, which represents 2,400 employers.

“The loudest voices on labor issues are New York City-based and to try to talk them out of something that they think works fabulously in the city is difficult,” he said.

Long Island farmer Bill Zalakar expects to make the four-hour drive from Center Moriches to the state Capitol frequently as he presses lawmakers to consider the impact of mandatory sick time on the agriculture industry, which he said is struggling with rising costs.

“We aren’t going to abuse our workers because we rely on them,” said Zalakar, the newly-elected president of the Long Island Farm Bureau. “If a worker gets hurt or sick they are covered for the day. If a mother needs to take her child to the doctor, I understand. Family has to come first but don’t regulate me on that.”

Zalakar has spent the past 20 years as a general manager at Kurt Weiss Greenhouses Inc., a wholesale supplier of hydrangeas, azaleas, poinsettias and other plants to retailing giants, such as Walmart, Home Depot, Costco and Whole Foods. The family-owned business ships more than 1 million plants a week during its busy season.

Kurt Weiss, like other farms on Long Island, is still adjusting to a slew of new mandates from Albany: the rise in the minimum wage to $13 an hour this year, overtime pay and a day of rest for farmworkers, and paid family leave. Responding to the minimum wage increase, Zalakar said he cut 8,000 to 10,000 manhours last year and focused on growing plants with higher profit margins.

Kurt Weiss has about 300 local employees, with 200 of them full time. Women make up about 75% of the workforce. Zalakar said “core employees” receive paid sick days, with the amount depending on their job title and seniority.

“It’s getting harder and harder to hold on on Long Island,” he said, noting Kurt Weiss has additional operations in Pennsylvania, New Jersey and Florida. “Pennsylvania is looking better and better each year because its [minimum wage] is lower than New York’s. We could move some production or automate if New York continues to squeeze us with regulations.”

Some local employers have provided paid sick leave for years to reduce employee turnover and because they say “it’s the right thing to do.” They said they are surprised by the vehement opposition of business and farm groups.

Café Revue, a 16-seat eatery inside the Book Revue bookstore in Huntington village, has provided paid sick leave since it opened four years ago. Café Revue has about 10 employees, most of whom are students who work part time.

“We’re too small not to like each other,” Nolan said. “You should know when you say, ‘I’m sick’ that it won’t hurt your pay or your ability to pay the rent, go grocery shopping or make a car payment.”

Café Revue employees haven’t abused the sick leave policy, said Nolan, who also is a full-time Town of Huntington employee. “The policy adds value to my business because there is less [employee] turnover.”

That’s been the experience of New York City employers, according to a CUNY study of the city’s 7-year-old sick leave law, which gave paid sick days to 1.4 million employees, many of whom held part-time jobs.

Nearly 85% of the employers surveyed said the law “had no effect on their overall business costs…it was a non-event for them,” the study said.

AARP lobbyist Bill Ferris pointed to the track record of the city and Westchester as evidence that mandatory paid sick leave won’t lead to business failures. He said AARP, which has more than 500,000 members on Long Island, supports sick leave because it enables workers to care for elderly relatives, keeping them out of costly nursing homes.

“What the governor is proposing isn’t unprecedented and Long Islanders don’t have to look too far to see the positive impact this policy is having in New York City,” Ferris said.

Richard B. Schrafel’s office on Jericho Turnpike in Bellerose village is a few feet from the city line. He said he opposes Cuomo’s universal sick leave proposal even though A.J. Schrafel Paper Corp. has provided paid time off to its eight employees in the state for years.

The employees earn 2.7 hours of paid time off, or PTO, per week, averaging about 20 days a year.

PTO can be used for any reason, no questions asked, said Schrafel, president of the company that was founded by his grandfather in 1941 in Manhattan.

“Under the governor’s plan, the employee would have to tell me why they were out because I would have to keep track of the days that are used for sickness,” he said. “I don’t think the state should make employers intrude on the lives of their employees by making them prove they are sick.”

While the Long Island Association business group is also concerned about the impact of universal sick leave on small businesses, it recognizes the mandate would “make workplaces healthier and increase employees’ productivity," said president Kevin Law.

Workers who secure paid sick days after having none said they feel a burden has been lifted. They no longer have to decide whether to work sick or lose pay, and in some cases, risk being fired.

Ventura, the social service employee from Brentwood, said he was relieved when he became eligible for paid sick leave and health insurance this month, after he was made a full-time employee of one agency instead of a part-timer for two agencies.

Previously, Ventura used vacation days, if he had them, when he was too ill to work or went without pay due to his part-time status.

“We all have family, co-workers and friends who don’t have sick time,” Ventura said. “It’s happening to someone you know.”

• All employees would receive sick leave regardless of whether they hold full-time, part-time or temporary positions.

• Employees could use sick leave to care for themselves or a family member.

• Employees who are in isolation or quarantine because of a contagious disease could not be fired and would be paid by their employer.