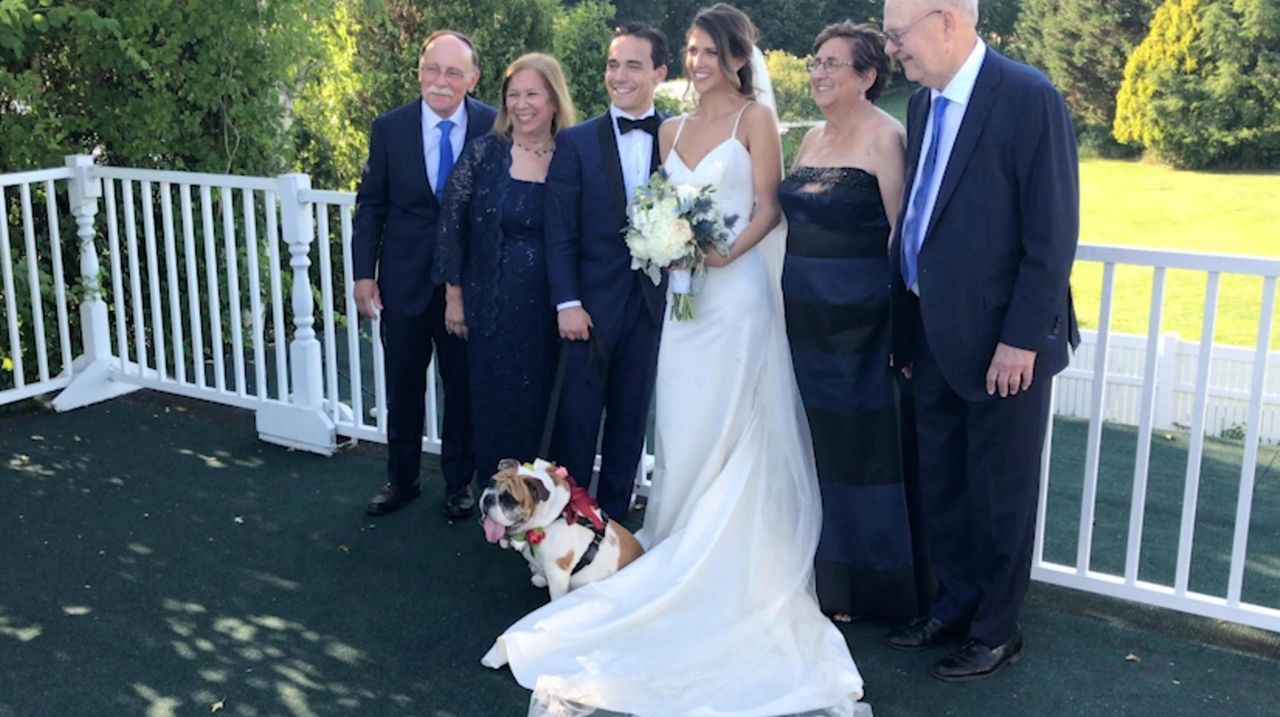 Veronica Silva of Malverne, owner of Pawfect for You, provides Long Island brides and grooms with the service she once hoped to find, picking up their pets, getting them dressed up for the big event and getting them to pose in wedding photos next to their "parents." Credit: Newsday / Daysi Calavia Robertson

Malverne entrepreneur Veronica Silva has always been a dog lover.

But it wasn't until 2016, when she was planning her wedding, that the idea for her wedding day dog-handling business, Pawfect for You, was born.

"I was trying to figure out how to get our own dog, JakeBear, to be in at least some wedding pictures with us, and we just couldn't figure out the logistics of how to make it work," she said.

"I did a quick online search thinking that there must be a pet-sitting service helping couples prep their pets for wedding day activities, like photos on the day of, but found nothing."

Silva said she then resorted to asking one of her husband's cousins for help. The cousin obliged, picking up the couple's 6-year-old German shepherd-corgi mix at their home, putting on his bow tie and driving him to and from the church.

"But she ended up missing the whole cocktail hour," Silva said. "So I realized there was quite a need for the business, especially the more I talked to other couples getting married."

Since then, Silva has been providing Long Island brides and grooms with the service she once hoped to find, picking up their pets, getting them ready for the big event by dressing them up in their tuxes, tutus or tiaras, driving them to and from the wedding venue, and even bribing them with treats so they'll pose in wedding photos next to their "parents."

She's expanded the business to include New York City and the Hudson Valley, and now covers the East Coast from Washington, D.C., to Maine with the help of 13 independent contractors. The company handled more than 100 weddings in June alone.

"Every wedding is different, so I really try to tailor each pet-care package to the specific couple's needs," said Silva, who says she always takes along a lint roller, to remove any pet hair that may end up on the bride's dress or the groom's pants, to every ceremony.

"For instance, if the couple is getting married on a hot summer day out in the Hamptons or on a vineyard on the East End, I'll take bags full of ice to cool the dog down. The success of the day really lies in those little details."

And Meeghan Rogers, assistant professor of finance at Farmingdale State College, said the success of Silva's business also lies in making itself distinguishable in a busy market.

"Specializing and becoming the authority in a niche business is smart," she said.

"She's not a dog-sitter. She's not a wedding planner. But she can work with both. If she's able to forge business alliances with other companies and create custom packages with pet stores, pet grooming businesses and dog apparel sellers, she can increase the company's overall reach, clientele and profits."

A Pawfect for You two-hour wedding day pet-care package costs $200, four-hour packages cost $385 and additional hours cost $85. A range of add-on services, such as having the dog sleep over in the sitter's home or a physical meet-and-greet with the dog prior to the event, are also available.

Silva said  she's raised her rates twice since opening the company two years ago, but it has not hurt business.

"What's so clever about this business is that it's at the intersection of two billion-dollar industries, the wedding industry and the pet-care industry, two industries in which people are willing to spend crazy amounts of money," he said.

"People are more likely to splurge on their wedding day than on any other day. And when it comes to their pets...well, that's another area where some people feel so passionately about their pets that they're more than pets, they're practically family, and so they'll spend any amount on them willingly."

Allison Zakre said she was unbothered by the cost of having Silva cater to her beloved bulldog Matilda's needs at her June 30 wedding in an Aquebogue vineyard.

Silva was on site to dress Matilda in a bright burgundy and fuchsia flower collar, ice her back so she wouldn't get too hot and give her boiled chicken so she'd pose for photos.

"I've had Matilda since she was 8 weeks old. I've known her longer than I've known Adam [her groom]. In fact, I knew Adam was the one when he told me his birthday was on May 29, the same as Matilda's. And when they met, it sealed the deal. It was love at first sight," she said.

"Getting married without Matilda being here was definitely out of the question."