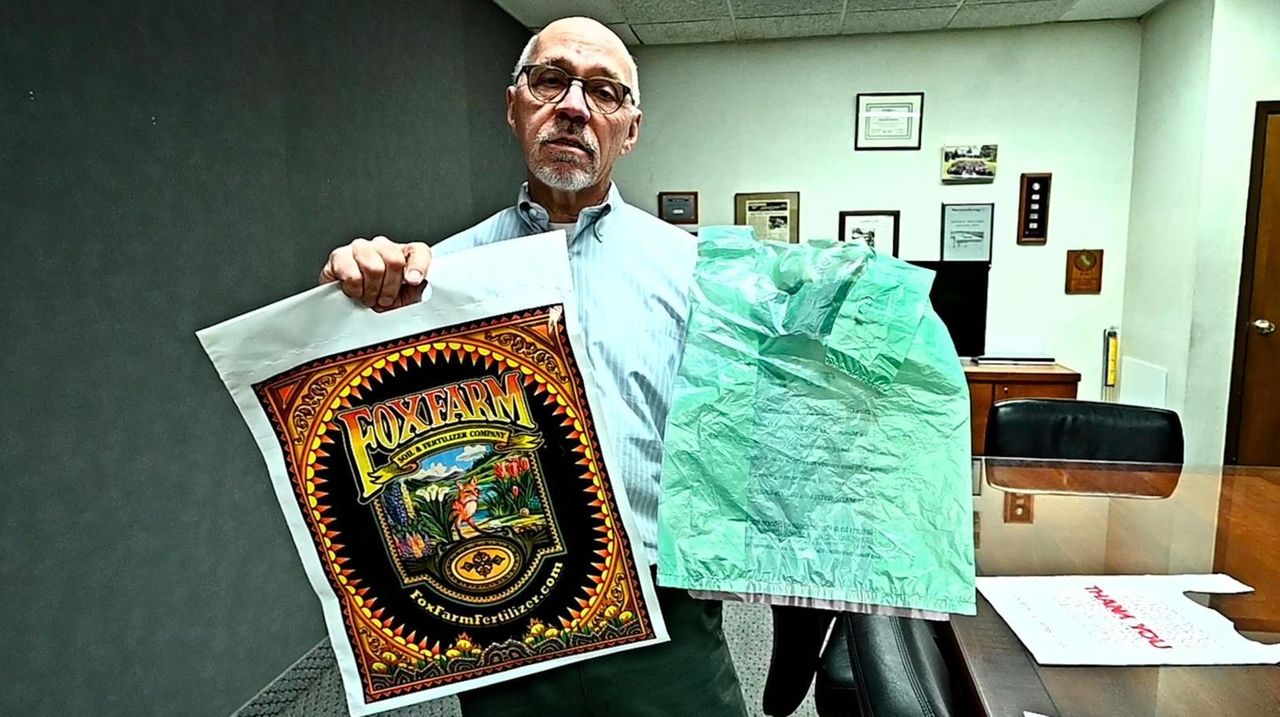 On March 1, New York State will enact a statewide ban on plastic bags and it will affect the companies that use them, as well as the businesses that make them. Ken Trottere, vice president of Poly-Pak Industries, says his company faces the possibility of winding down its operations if the new law goes into effect as is. Credit: Newsday / J. Conrad Williams Jr.

The choice is about to disappear for New York shoppers.

The state's ban on single-use plastic bags — which prohibits retailers from handing them out to customers starting March 1 — has provoked mixed reactions from shoppers, environmentalists, retailers and businesses that sell and manufacture plastic bags.

Some customers are all for it, while others say the law is misguided.

Stop & Shop customer Maureen Glass, 63, of West Islip, reusable tote in hand, questioned why anyone would oppose the ban. "I don't get it," she said. "It's not that hard, just bring your own bag … it's good for the environment, it's good for all of us."

But Wendy Hunter, also of West Islip, called the legislation shortsighted, saying lawmakers "think they're getting rid of plastic but they're not."

"What about all the strawberries that come in plastic containers? What about all the foods sold wrapped in plastic? The shelves at the supermarket will still be filled with plastic," Hunter said. "The reusable bags they want us to buy are also made of plastic … This is not better. It's nothing more than an inconvenience and it's infuriating."

Environmentalists say the law is a win, but they worry about recently proposed regulations they claim could curb the law's original intent and create a loophole for plastic bag manufacturers seeking to stay in business.

They also fear it could cause an undesired surge in paper bag use because lawmakers failed to make a 5-cent fee on paper bags mandatory. Instead they left it up to counties and cities. Suffolk has opted in to the fee and Nassau has opted out.

Retailers say replacing plastic bags with paper will strain their already tight margins, since paper bags can cost at least four times as much as single-use plastic bags. While Suffolk retailers keep the county-mandated 5-cent per bag fee they collect, under the new law the money will go to local and state government, with 3 cents to a state environmental fund and 2 cents to county funds for reusable bags.

Paper bag distributors on the Island view the ban as an opportunity for growth, noting they're already seeing an uptick in orders. It's had the opposite effect for local plastic bag manufacturers.

The president of a Melville manufacturer said the ban could force him out of business.

"We ask you to not destroy the livelihoods of our 300 employees," Peter Levy, president of Poly-Pak Industries, said last month at a public hearing in Albany held by the Department of Environmental Conservation.

The ban thrilled environmentalists, who deemed the legislation a significant step toward reducing the 23 billion plastic bags used by New York residents every year.

But a new provision added to the proposed regulations in November by DEC officials that allows thicker, heavier plastic bags, classified as "10 mil," is a big mistake, said Judith Enck, a former EPA regional administrator who now teaches about plastic pollution at Bennington College in Vermont. A mil is a thousandth of an inch.

For comparison, the plastic bags typically offered at supermarkets are 0.5 mil thick. Mulch and fertilizer bags are usually 4 mil; 10 mil bags are not on the market.

Plastic bag makers seek a compromise that would allow bags between 2.25 and 4 mil and say the 10 mil regulation doesn't help them. The equipment in their facilities can't make bags that thick and investing in machines that could would be too costly, they said.

Enck said "this law which the legislature and Governor Cuomo adopted bans plastic bags full stop, it doesn't allow for thicker bags. It says the legislature is concerned about the pollution of our planet …  Moving from a bag that's 0.5 mil thick to a bag that's 4 mil is a mistake and then taking the next step of moving to 10 mil bags is an even greater mistake."

She and other environmental advocates called the DEC provision a "loophole," saying it was drafted to appease the plastic bag manufacturing industry.

Regulations may not be completed by March 1, DEC Commissioner Basil Seggos said last week.  But the finished regulations "won't look very different from where we started," he said.

Peter M. Iwanowicz, executive director of Environmental Advocates of New York, a nonprofit advocacy group, said his group would "certainly contemplate a lawsuit  [against the DEC] if their final regulations expand the definition of an exempt bag," but said he's hopeful it won't get to that point.

Iwanowicz said his group is distressed the new law requires counties and cities to opt-in to a 5-cent fee on paper bags, instead of mandating a statewide fee.

"When it comes to shifting consumer behavior, it's more easily accomplished if you put your money where your mouth is," he said. "A fee on paper bags across the board would produce the best possible outcome because the idea behind this law is not 'Hey, let's all switch from plastic to paper!'"

Both plastic and paper have negative consequences for the environment, Iwanowicz said.

Plastic is produced from fossil fuels and leads to pollution along streets and in waterways, and breaks down into harmful "microplastics" that ultimately end up in our food chain, he said.

But the manufacturing of paper bags is no better, Iwanowicz said.

"It's energy- and resource-intensive. Trees need to be cut down, making it requires a lot of water, and it's much heavier than plastic to transport, meaning more tractor trailers are needed to get it from point A to point B," he said. "That's why what we need to be doing is fostering a 'Bring Your Own Bag' culture and steering people toward reusable bags."

Most retailers have set plans in motion to ensure their stores comply with the ban. Grocery chains like Stop & Shop and Shop Rite are phasing out single-use plastic bags and upping their stock of paper and reusable bags.

But compliance comes at a cost.

"The average single-use plastic grocery bag costs about 1 to 4 cents per bag. The average paper bag costs somewhere between 13 to 17 cents per bag," said Mike Durant, president of the Food Industry Alliance of New York, an Albany-based trade group that represents grocery stores.

"That's a pretty significant difference, especially when you consider that no portion of the 5-cent fee collected for bags [will be] kept by the retailers. That's an extra cost that these companies, many of them already operating on tight margins, are going to have to eat up."

Perhaps more troublesome than the cost, Durant said, is the string of unanswered questions retailers still have about the ban.

"I'm getting calls almost every day from members asking 'What happens if I can't source enough paper bags?' " he said. " 'What if customers walk in and I don't have any?' They're worried they'll fall out of favor with customers and lose business."

Members are also asking if they can charge more than the 5-cent per bag fee stipulated in the law, he said:  " 'Can we charge 10 cents and keep the extra nickel?' "

Yes, said the DEC's Seggos. "Retailers are free to charge a fee greater than 5 cents as long as they declare any amount over the mandatory 5-cent fee as income," he said.

"There's no law prohibiting this. They can charge 10 cents or even 15 if they want to. They're also free to charge a 5-cent fee for paper bags in areas that opted out. And if they decide not to carry bags at all, they're not obligated to. These are all business determinations."

No plastic. Now what?

For Lisa Semeraro, owner of Urban Packaging, a wholesale  bag supplier in Babylon that's been in business for more than two decades, the plastic bag ban is an opportunity for growth.

"Plastic bag makers may be concerned about the law but I'm not," she said. "My phone's been ringing and so many customers both existing and new have been asking, 'What can we do? We can't use plastic. Now what?'"

The ban has already led to a flood of orders — and not just for paper bags, said Semeraro, who sells bags made from materials including bamboo, cotton, hemp and jute.

"I diversified my product offerings about 10 years ago when I realized people were thinking about plastic and its consequences to the environment and searching for alternatives," she said.

"If bans begin to spread and more people turn toward reusable bags, that could have a significant effect on us because even though we sell other products, our bag sales are substantial."

Fetta points to the fact that New York clients make up only 15% of his business as the reason he's not overly worried — for now.

Levy of Poly-Pak Industries, a plastic bag maker in business since 1958, is not so lucky.

Because the vast majority of Poly-Pak's sales are in New York, he said the law will have a catastrophic effect on his operation and the livelihoods of his employees, most of whom have worked at the company's 150,000-square-foot facility in Melville for more than 20 years.

Poly-Pak doesn't manufacture any bags exempt from the law, and the possibility of modifying the business to produce paper bags is far-fetched, said company vice president Ken Trottere. "It would require special skills and machinery and cost us millions of dollars," he said.

To bag or not to bag? Free or fee?

Here's what to expect at retailers on LI:

Stop & Shop: 5-cent fee for paper bags in Nassau and Suffolk. Fees collected in Nassau will be donated to local environmental groups. Starting Feb. 22, free reusable bags to customers who bring in one or more plastic bags for recycling, limit one per customer per visit, while supplies last. (Offer not valid in Long Beach.)

ShopRite: The chain will "comply fully with the new law," a spokeswoman said; she did not say if the company will charge a fee for paper bags at locations in areas that opted out.

Lidl: 5-cent fee in Nassau and Suffolk. Lidl has never offered single use plastic bags, and has always charged a small fee for paper bags, a spokesman said.

Target: Free paper bags in Nassau, 5-cent fee in Suffolk. All locations will continue to give customers who bring in reusable bags a 5-cent discount per bag, a spokeswoman said.

Walmart: Did not return calls or emails for comment.