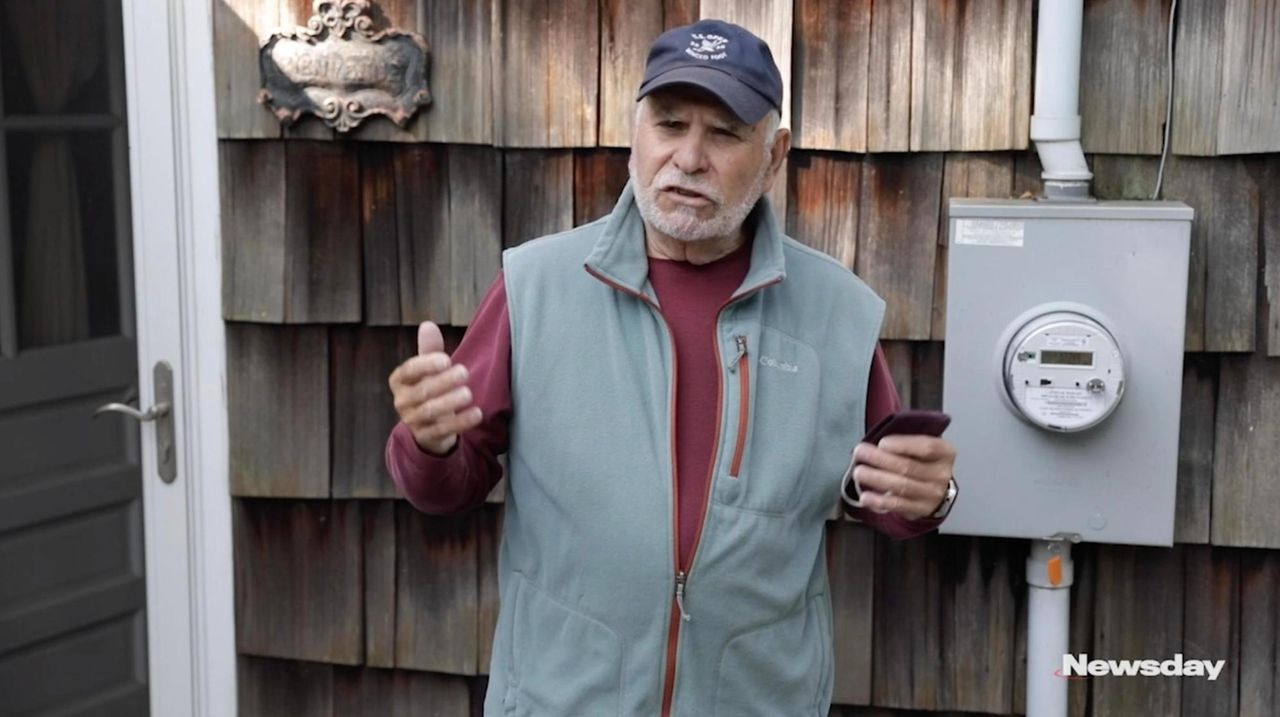 Stony Brook resident Harry Resnick lost power for nearly a week during Tropical Storm Isaias and then turned off power to his house for another week to travel to Massachusetts. Resnick expected a record low bill for August, instead, he got a bill for $628.78. Credit: Newsday / Reece T. Williams

After losing power for nearly a week after Tropical Storm Isaias, then turning off power to his house for another week to travel to Massachusetts, Harry Resnick of Stony Brook was expecting a record low bill for August.

"It takes your breath away," he said.

Readings from his new PSEG smart meter showed him using a record 44 kilowatt-hours per day during the period, according to an initial bill dated June 25 to Aug. 26. Worse, he received a new bill in August that showed he’d used another $60.29 worth of electricity for "service from Aug. 26 to Aug. 27," apparently one day's usage.

"I was outraged they would put a new system in and bill me for something that is so totally out of the norm, and just do it like it’s right," he said.

Resnick’s situation echoes the claims of a pool of PSEG ratepayers who have questioned their bills in the aftermath of the storm, which left 503,000 customers without power. Some wonder why they are paying daily service charges for days without service.

Customer complaints about high bills have spiked, the company said. High-bill "escalated calls" — calls to its customer call center that were escalated to a supervisor — more than doubled to 144 in August, from 68 in the month a year ago, PSEG Long Island said. In July, high-bill escalated calls also nearly doubled, to 149 this year from 76 last year. "We are seeing that escalated calls to a supervisor are helping customers understand their bill," PSEG said.

The state Department of Public Service saw a more than fivefold increase in high-bill complaints from PSEG Long Island customers this year compared to last —17 in September, compared with just three the year before. Complaints were also higher in July and August, the department said.

High-bill complaints are not unusual in the summer when air conditioner use tends to drive bills higher, the agency said, adding that it hasn't noticed a particular spike related to the storm. Still, spokesman James Denn said the agency is "conducting a thorough investigation and all enforcement options are on the table."

Resnick's high bill came after he received a new PSEG smart meter Aug. 3, a day before the storm struck. Since that day, according to his bill, his daily usage more than doubled from an average of 21 kilowatt hours to a steady 44 kilowatt hours in July and August. While utilities say the new meters are accurate, complaints about smart meters and the perception that they spike bills is nothing new. PSEG says its meters are accurate.

In an interview, PSEG officials said Resnick's bill is correct, and that the high bill in August was the result of a reconciliation of prior estimated bills. His meter wasn't read in May and June, they said, so the bill included higher usage for those months that was reconciled in the August bill.

Rick Walden, vice president for customer services for PSEG, said Resnick's higher use is in line with generally higher residential use by customers who are working from home during the pandemic. It also aligns with a generally warmer summer in August.

But Resnick and his wife are retired, so work-at-home trends exclude him. In addition, his bill shows degree days in August generally matched those of 2019 — an average of 78 degrees to 79 degrees for the month.

He wasn't buying PSEG's explanation for the higher bill. "That's crazy," he said, noting that the only factor that would have changed usage in his home — children no longer living there — should have lowered the bill, not raised it.

The same is true for Corissa Mattis of Port Jefferson Station, who was pregnant during a 2019 heat wave and saw a lower bill then than the one she got for August of 2020 — the new bill was a 140% increase, she said.

"I can't imagine how my usage could be higher," she said. A new smart meter was installed in her home during the summer.

Mattis said she realizes she's at a disadvantage fighting the bill.

"It's your utility company, you don't have a choice," she said. "They have it over you a little bit."

The Department of Public Service said customers can file complaints by phone at 800-342-3377 or online at dps.ny.gov/complaints.

LIPA seeks $350M bridge loan to cover Isaias costsLIPA is awaiting a major disaster declaration for the storm, which it expects will cost around $330 million. Exec: PSEG to do 'hundreds' of things to prevent Isaias repeatA PSEG official says more storm hardening, plus communication and computer improvements will prevent failures the next time. Report: Computer breakdown led to PSEG failuresA task force found that failure of the system, prompted by a tidal wave of customer communications, led to incorrect restoration times and slowed field work. Six days, 101 messages — and no powerThe utility's automated system was flooded with messages and urgent demands from customers trying to find out more about outages. Here's one man's experience.