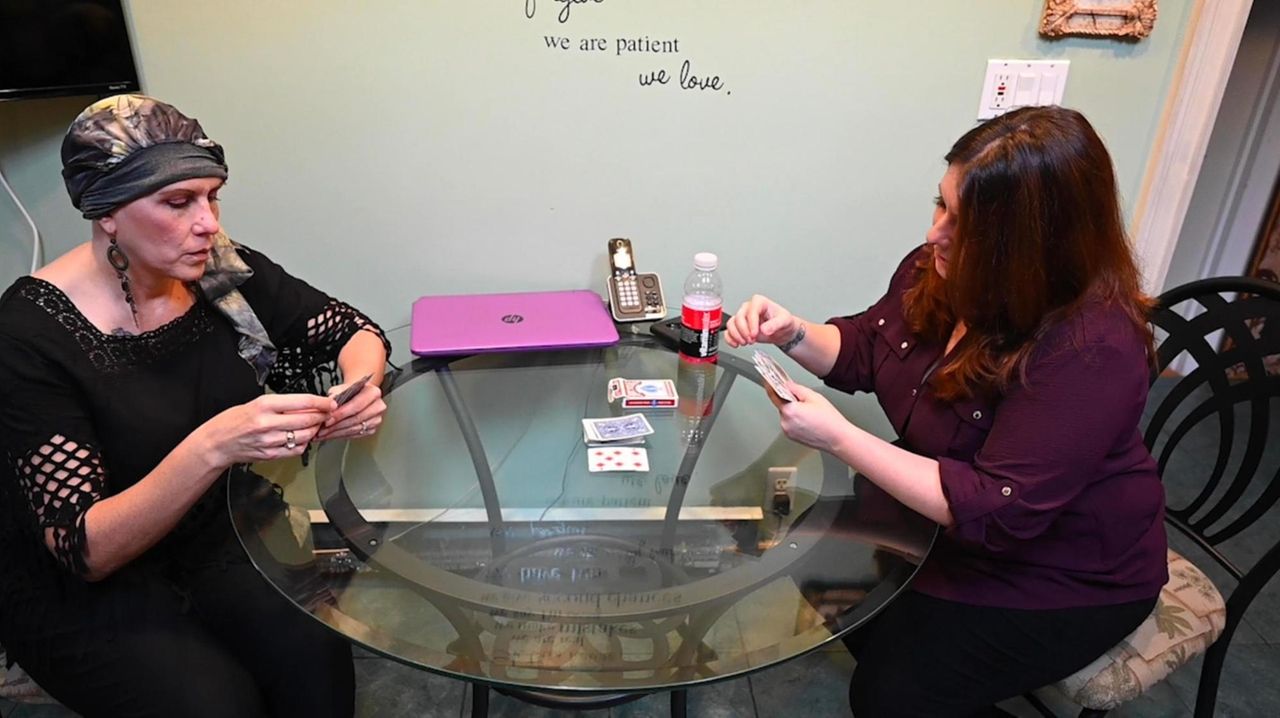 For many workers, the pandemic shutdown and emergence of remote work presented an opportunity to stop and reflect on their careers, families and long-term goals. Lita Davidson of Bay Shore talks about her new perspective. Credit: Newsday / Steve Pfost

Long Islanders are looking for more out of their work lives and are increasingly willing to quit their jobs to get it.

For many workers, the pandemic shutdown and emergence of remote work presented an opportunity to stop and reflect on their careers, families and long-term goals. Many found more flexibility working from home and have no intention of giving it up even if it means looking for another job, leading to a nationwide trend many are calling the "Great Resignation."

In April, 4 million Americans quit their jobs, the federal Bureau of Labor Statistics reported. That's 2.8%, the highest quit rate in the 21 years such data has been collected. The rates in May and June weren't far behind: 3.6 million (2.5%) and 3.9 million (2.7%), respectively.

In recent years, the typical rate at which workers walk away from their jobs has been between 2% and 2.3% a month.

"It’s very unusual," said Martin Kohli, the bureau’s chief regional economist in Manhattan. "We are in unusual times, and this is an unusually high level of quitting."

Statistics on quit rates for Long Island and New York State are not available.

Experts in human resources and recruiting said there are many reasons employers are having a harder time retaining workers, but many revolve around employees who are unwilling to go back to the office.

Some older workers, either concerned for their health or stressed by the uncertainty of the pandemic, have been retiring earlier. Working parents, notably women, see remote work as an answer to high child care costs. Still others have simply grown accustomed to working from home and will leave otherwise good jobs if they require a return to the office.

Regardless of why workers are calling it quits, the labor market is favoring the job seeker, hiring experts said, and companies across the country are doing what they can to appeal to existing employees and would-be hires.

"They’re working harder than they ever have to make their positions more attractive to retain workers," said Steve Davies, president of management consulting firm Edge Initiatives in Huntington.

While many of the business owners Davies works with have not seen a massive exodus of staff, "there’s a fear" of losing top talent or being unable to recruit top talent, leading many to preemptively implement incentives like flexible work options, paid employee referral programs and sign-on bonuses.

And the shift is not limited to this country.

Roughly 41% of workers around the globe were considering quitting their job over the next year, according to a worldwide survey of 31,092 workers conducted by Microsoft.

"You have to be sensitive to the whole work-from-home culture that has developed," Davies said. If you force workers back who don't want to go, "there’s a very good chance you’ll lose them," he said.

Remote work as a perk

For businesses that have returned to the office or plan to, ending remote work can leave employees feeling like they’ve lost a major job perk, said Renée Nielsen, president of Nielsen Staffing in Islandia.

"It’s like having a benefit and then taking it away," she said. "Everyone is looking for remote work."

As a result, an increasing number of her corporate clients are planning for a hybrid work model.

Staff at H2M architects + engineers in Melville returned to the office last summer, ahead of many office-based businesses on the Island. And while the organization has largely retained its 475-employee workforce, a few have left in search of remote work, said chief human resource officer Liz Uzzo.

Most who've left over the past 18 months have done so for more traditional reasons – higher pay, moving out of the area or promotion opportunities. Still, Uzzo said, the resignations has led the firm to promote its culture and learning opportunities as a means of retaining staff.

The move to hybrid and flexible scheduling is a workplace evolution that's likely here to stay, said John Coverdale, president of the Center for Workplace Solutions, a Bayport HR management consulting firm.

"You have people who are not at the tail end of their careers who have been saying for several years, ‘I want a more flexible work environment,’" he said.

Increasingly workers "want an employer who is concerned about their wellness mentally and physically," and one that allows employees to have more control over work-life balance, Coverdale said.

"It’s a shift in priorities for some people," he said.

"At Canon, we’re seeing pieces of some of this as well, although I do believe we are weathering the storm quite well with a number of the new programs that we’ve implemented, such as our hybrid schedule," Millar said.

The company, with about 1,500 employees on the Island, has required staff come to its headquarters only on Mondays and Wednesdays.

"It’s actually what I would consider a second phase of COVID-related disruptions," Millar said, the first phase occurring as businesses downsized in response to last year's outbreak.

Now, he said, workers are the ones holding the reins.

Life, work and 'The Great Resignation'Long Islanders talk about what drives them to leave a job — and what makes them want to stay.