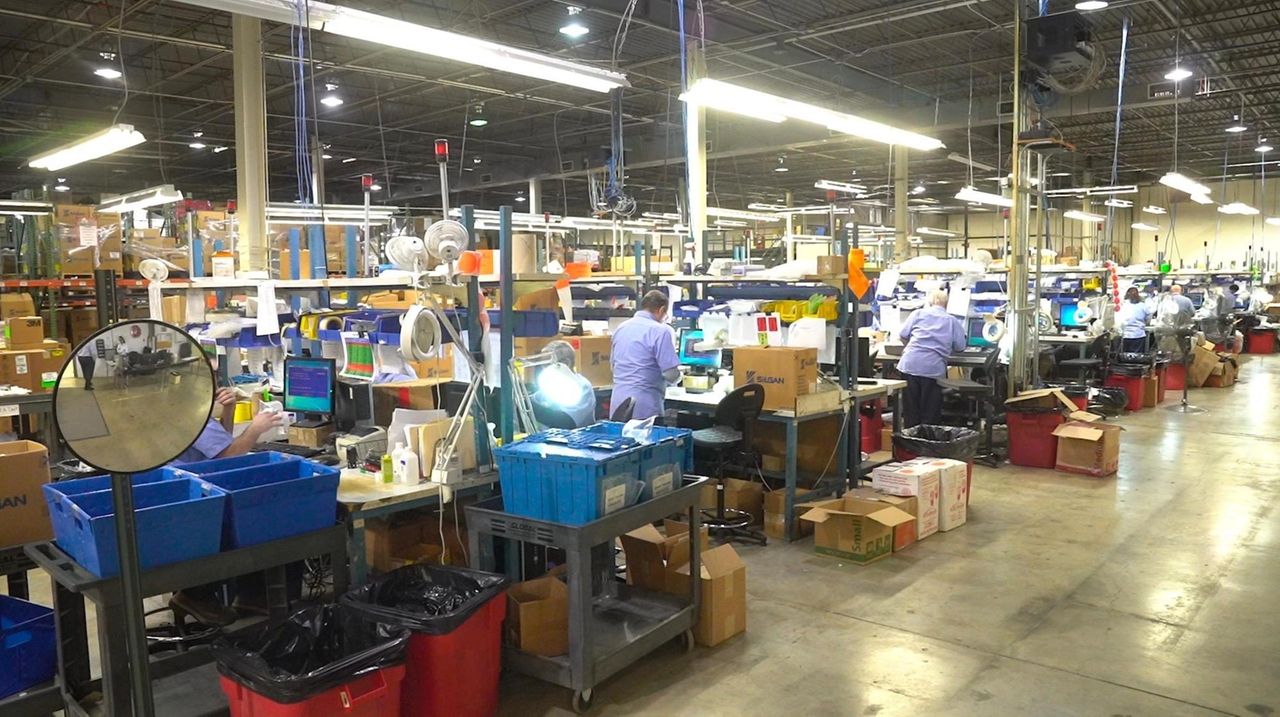 Long Island companies may have to rethink their drug testing policies as state lawmakers renew a push to legalize recreational marijuana.

A bid for legalization narrowly failed last year. Gov. Andrew M. Cuomo, who included the Cannabis Regulation and Taxation Act in his new budget, made it clear last month in his State of the State address that it's one of his top priorities. The New York State Bar Association threw its support behind legalization last month.

“From an HR perspective, it creates all kinds of challenges,” said Rob Basso, chief executive of Associated Human Capital Management in Plainview, which handles payroll and HR functions for about 1,000 small and mid-size firms.

Long Island companies are taking a variety of approaches. Some say they will consider dropping marijuana from drug screenings. Others don't screen for any drugs, saying competition for workers is fierce and what employees do on their own time isn't important as long as it doesn't impact their job performance. And still others say the nature of their business means they will continue screening for marijuana unless it is legalized at the federal level.

For employers with "safety sensitive" jobs, such as drivers or health care workers, or jobs overseen by federal agencies, the move to a more pot-friendly screening process is unlikely for the time being. But in states that have legalized recreational marijuana, such as Colorado, Washington and California, experts said some companies have removed marijuana from their preemployment drug testing in a move to not exclude qualified candidates in an already tight labor market.

"If the law changes and marijuana is legalized in New York State, our policy will change to reflect the current law," Karen Mazako, vice president of human resources for grocery chain Stew Leonard’s, said in a statement. "However, we will continue to do pre-employment screening for illegal drugs."

Drug testing has been part of the grocer’s hiring procedure for about 30 years, the company said. The firm, with about 500 employees at its East Meadow and Farmingdale stores and 2,500 total, believes drug screening helps ensure it's providing "a safe place to work and shop," Mazako said.

But recently, the policy has made it more challenging to find qualified candidates, she said.  “We find ourselves faced with an increasing number of qualified applicants failing drug tests due to marijuana use.”

According to recent polls by the Federal Reserve Bank of New York, 15.3% of manufacturers in the state and 5.5% of service firms in the New York metro area said they had difficulty filling positions because candidates refused to take or failed drug tests.

The state's legalization of medical marijuana has already complicated matters for some employers, said Kathryn Russo, a principal at law firm Jackson Lewis in Melville who specializes in workplace drug policies.

The 2014 Compassionate Care Act allows medically certified residents to legally purchase and use non-smoked forms of marijuana; users are viewed as having a disability under the state’s human rights law.  As a result, employers with four or more employees are prohibited from firing or refusing to employ individuals solely because they use medical marijuana.

“Employers have to at least make efforts to accommodate someone who uses medical marijuana,” Russo said.

Changes in the way courts handle medical marijuana cases have put employers across the country in a tougher spot in recent years, Russo said.

“Prior to 2017, if an applicant didn’t get hired or an employee got fired because they used medical marijuana, if they filed a lawsuit against an employer, generally [the suit] would be dismissed,” Russo said. In the last three years, however, courts and state laws have begun to favor medical marijuana patients.

“Pretty uniformly since 2017 I haven’t seen a ruling in favor of an employer,” she said. “Employers are now nervous. It used to be you didn’t have to tolerate any marijuana use, medical or otherwise.”

HR professionals at companies across the country are examining how best to adapt their drug screening policies.

“It’s definitely a hot topic, especially since it’s evolving and states are adding more laws around the use of marijuana,” said Amber Clayton, knowledge center director for the Society of Human Resource Management, a national professional HR group based in Alexandria, Virginia.

At least 33 states allow the use of medical marijuana; 11 of those plus Washington, D.C., have legalized recreational marijuana use for adults, with Illinois joining the roster this year.

Before broad legalization of medical marijuana, employers had more leeway to not hire or to fire an employee who failed a drug test, Clayton said.

Now, when an employee comes up positive for marijuana use, companies "need to look at what are the protections in place,” she said.

Starting in May, employers in New York City will be prohibited from screening job applicants for marijuana, though exceptions include law enforcement, jobs that require a commercial driver’s license, positions that involve the supervision of medical patients or children, and jobs where government regulations, be they federal or state, require a drug test.

Although laws may be changing in a patchwork fashion, “one thing employers don’t have to do is tolerate someone being high at work or being under the influence at work, just like with alcohol,” Clayton said.

Domenique Camacho Moran, partner and labor and employment attorney at Farrell Fritz in Uniondale, said a large part of the handwringing over the legalization of marijuana and employer drug testing policies comes from the difficulty of determining if an employee is under the influence of cannabis on the job.

“Unlike some other drugs and substances, marijuana stays in the system for a very long time,” Moran said. “You can get a positive drug test several days, if not weeks after.”

What that means for employers is that an on-the-spot drug test, unlike a breathalyzer in the case of alcohol, cannot accurately tell if an employee is under the influence of cannabis in the moment.

When it comes to preemployment testing, Moran said, increasingly she’s urging business clients to evaluate why they test for marijuana in the first place.

“In the old days we did it because it was unlawful and indicated that someone might violate the law,” she said. Today, with changing attitudes and laws, “I’m not sure they're getting valuable information they can use.

"My view is every employer on Long Island should be looking at whether it makes sense to test for [it] during preemployment,” she said.

Drug screening can cost employers from $20 to $50 per urine test.

An estimated 62% of U.S. companies drug test all job candidates, according to a 2019 survey of over 3,400 human resource professionals in the U.S. by HireRight, a global background check services firm. That was down 12% from 2018.

In the survey, 48% of respondents said there has been no change to their policy because of marijuana legalization efforts, 6% said they’ve updated their policy, and another 6% said they plan to update their policy.

Data from Quest Diagnostics, which performs 10 million drug tests a year, show marijuana remains the number one offender in failed drug tests in the U.S.

While the overwhelming majority of companies that test for drugs screen for marijuana, Barry Sample, director of science and technology at Quest, said employers in states that have legalized recreational marijuana have removed THC from their screening at a higher rate than those in other states.

“In the recreational use states, the rate at which marijuana was included in urine workforce drug testing went down 3.8 percent from 98.5% to 94.7%,” he said.

In some industries, preemployment drug testing hasn’t been the norm for years.

“I don’t know of too many restaurants that drug test,” said Michael Bohlsen, co-owner of the Bohlsen Restaurant Group, which includes Monsoon in Babylon, Prime in Huntington and Tellers in Islip.

“I’m not sure it’s the best use of resources,” he said, adding that it's entirely possible that an applicant would abstain from drug use until a test and resume use after. On top of that, he said, given the tight labor market, it doesn’t make sense for his business to make judgments on people not pertinent to the job description.

“In today’s competitive environment, competition is fierce, and getting into someone’s bedroom, so to speak, to make an ethical judgment is not my kind of business,” he said.

Ultimately, at his restaurants, Bohlsen said, if drugs or alcohol use become an issue for an employee, the company’s first course of action is to offer support and guidance on seeking treatment.

“We invest in the long-term relationship with our employees,” he said. “If an employee has an issue with drug or alcohol abuse, we are much more inclined to offer them help than to fire them.”

Basso said legalization of recreational marijuana will mean extra complications for employers in "safety sensitive industries or professions" such as manufacturing and truck driving. Also, the patchwork of drug laws across the country makes creating a uniform drug screening process even more difficult for companies with operations in multiple states.

Employers with interstate operations may need to bring in attorneys to review their policies, an added burden to smaller firms, Basso said.

“If you have a drug testing policy and you want to enforce it in 42 states, it’s quite a challenge,” said attorney Russo.  “There are 33 states plus D.C. that have medical marijuana laws and they're all different.”

For Paul Nick, chief executive of Guaranteed Returns in Holbrook, regular drug testing is a needed safeguard in the company’s line of work.

Guaranteed Returns is a reverse pharmaceutical distributor, managing the return of unused or expired drugs for hospitals, nursing homes, the military and other businesses back to wholesalers and drug manufacturers. In return, manufacturers provide customers with cash credits they can use on their next order of pharmaceuticals.

“We have oxycontin, we have morphine, we have fentanyl, we have all of those things that people get addicted to. The last thing we want is for someone to be working here who is addicted to those drugs,” said Nick, who took over as CEO in 2014 after the company’s previous executives were charged with fraud by federal investigators.

If marijuana legalization comes to the state,  the company, which is licensed by the Drug Enforcement Administration, will have to modify its existing policy, which currently states that all illegal drugs are tested for.

“We would change our policy because it may not be an illegal drug, but we’ll still be screening for it,” Nick said. Ultimately, the company would only consider removing THC from its screening if the drug were legalized on a federal level, he said.