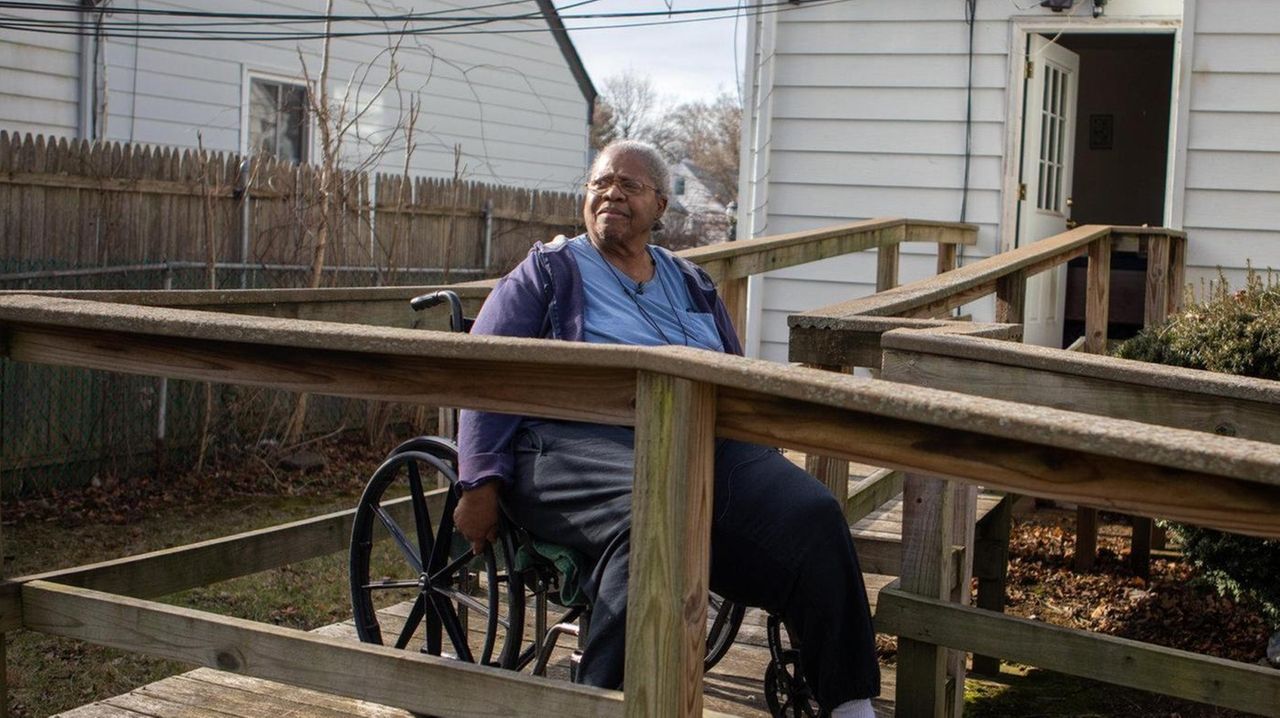 With the help of Rebuilding Together Long Island, Ruby McJunkins's home has been modified to make it more wheelchair accessible — doorways were widened, an entrance ramp was built and the bathroom and kitchen were rearranged to accommodate her lifestyle. Credit: Newsday / Shelby Knowles; Kendall Rodriguez

Long Island seniors who feel there’s no place like home are remodeling their houses to accommodate a wheelchair or walker instead of moving to elder-care facilities.

It’s more affordable — and comfortable — to overhaul a familiar, well-loved home than to move into an assisted-living complex or a nursing home, some say.

Even so, the cost of renovation can be high, potentially five figures to make a small bathroom fully wheelchair-accessible,  and thousands more to install a long ramp or a motorized stair lift.

For some seniors with low incomes, volunteers or government grants can help. But for many, the cost of a renovation is out of reach, forcing them to either move to a senior living facility or remain in an environment that might no longer be safe.

It’s a challenge faced by a growing share of Long Island’s population.

“They’re calling it a silver tsunami,” said Jorge Martinez, deputy commissioner of Nassau County’s Office for the Aging. “We want the seniors to stay in their homes as long as possible,” Martinez said. But, he said, “the population in Nassau County is becoming very old, and in many cases very frail…. In some cases they’re outliving their retirement funds.”

The population is graying nationwide, too. Across the country, one in five Americans are expected to be 65 and older by the year 2034, outnumbering those 18 and younger for the first time in the nation’s history, census projections show.

Long Island’s housing stock includes many older homes featuring potentially insurmountable obstacles to those who use wheelchairs and walkers, such as stairs, small bathrooms and narrow doorways. More than half of Long Island homes occupied by senior citizens were built before 1960, census estimates show.

“A lot of the houses that seniors are aging into were built for young families,” said Lisa Stern, assistant vice president for senior and adult services at the Mineola-based nonprofit FCA, formerly known as Family & Children’s Association, which offers case management, financial counseling and other services for seniors. Falling on the stairs can lead to "debilitating" injuries, and in many cases adult children live too far away to check on their parents regularly, Stern said.

It can take five years or more to get off the waiting lists for affordable housing for seniors, Stern said. In some cases, federal, state and local agencies can help low-income seniors modify their longtime homes, she said. But some seniors are not adept at using the internet to research and apply for services, and some find it hard to get help without a case manager.

As a result, many seniors struggle to navigate their own homes.

“You have people who, due to physical limitations, without a ramp they can’t get out of their home,” said Stella Hendrickson, president of Rebuilding Together Long Island, a nonprofit whose volunteers have made repairs and modifications to more than 2,600 homes since 1992. "We’ve encountered some people, it’s been years since they’ve been out of their house…. In some cases the doorways are too narrow so they might even be confined to just one room."

That was the case for Ruby McJunkins, 74, who uses a wheelchair. Rebuilding Together Long Island's volunteers constructed a wooden ramp to the back door of her Uniondale home,   allowing her to go to doctor's appointments and enjoy her backyard. They also widened the too-narrow doorways of her bedroom and bathroom and created two new doorways, among other improvements. The project would have cost at least $10,000 at market rates, according to Rebuilding Together.

Before those changes, McJunkins recalled as she sat in her bedroom, "I really was confined to this room." Without the volunteers' help, she said, "I wouldn't have been able to afford it."

McJunkins used to work as a sales representative for Nabisco, driving around Manhattan and winning company prizes for racking up sales. Muscular dystrophy and back injuries made it impossible to continue in that career, she said. Now it's a challenge to afford Long Island's  high housing costs on a fixed income, she said.

In an elder-care facility, schedules can be rigid and there's little access to fresh air, McJunkins said. "I like having my own home," she said.  She shares her home with her daughter and grandsons, and when they barbecue, she said, "I can go to the backyard with them and you know, that means a lot. So you want to stay in your home."

In a study by AARP, 90% of those 65 and older said they would prefer to stay at home.

On Long Island, nursing homes cost an average $474 a day, or about $173,000 a year, according to the nonprofit National Investment Center for Seniors Housing & Care in Maryland. The average cost of assisted-living on the Island is more than $78,000, the group found.

Certainly, some seniors are better served in  assisted living or nursing homes, whether for the easy availability of medical treatments and personal care, the camaraderie of other seniors or other amenities or services they cannot get at home.

For those who would  rather remain home, the median annual cost of home health aides working 44 hours a week is $57,200 in the New York City metro area, according to a survey by Genworth Financial, an insurance company based in Richmond, Virginia.

In some Long Island towns, seniors make up nearly a third of the population, and that share is growing, Morgan said. In Southold, those 65 and older comprise nearly 30% of the population, census figures show. In North Hempstead and Oyster Bay, almost one in five residents are 65 or older, and about 9% are at least 75.

There are not enough beds in elder-care facilities to accommodate all the Island’s seniors, even if they wanted to move into facilities and could afford to do so, Morgan said. “It’s far better for us as a community to make these homes livable for older adults rather than building new, expensive care facilities,” he said.

“These are folks who have lived on Long Island for a long time and they want to stay in the community that they know,” Morgan said. “The question is, how feasible is that in terms of cost, finances, safety and accessibility?”

The price of renovations can be beyond the budgets of some homeowners.

To renovate a bathroom using “universal design” — that is, making it wheelchair-accessible and also appealing to those without disabilities — costs an average of about $35,600 in the mid-Atlantic states, according to Remodeling Magazine’s 2020 Cost vs. Value Survey. That would involve widening the doorway to 36 inches and installing a walk-in shower, specialized toilet and grab bars.

On Long Island, it typically costs between $8,000 and $40,000 to replace bathroom sinks, toilets and showers with wheelchair-accessible ones, said Heather Brin, principal architect of Aging in Place Architecture in Port Jefferson.

The cost of a temporary ramp can range from $45 for a small ramp over a threshold to $5,800 for a nine-foot ramp, Brin said.

Brin said installing a motorized chair lift on a straight staircase can be affordable, costing a few thousand dollars, but staircases that include a turn require custom-built lifts that may be cost-prohibitive. Split-level ranches are especially hard to navigate, she said.

Brin said she is helping a disabled Long Island senior move into a rental apartment, remodeling it at a lower cost than paying for assisted living. Certain changes — such as installing grab bars in bathrooms — only cost a few hundred dollars, she said.

Disabled renters can make reasonable modifications to their apartments, a right protected by the federal Fair Housing Act, said Andrew Lieb, an attorney in Smithtown.

Whether they own or rent their homes, Long Island seniors "need to really sit down with a financial planner" before proceeding, Lieb said. "Is it even a viable option to stay in your house? ... See if you have enough assets to maintain your standards of living."

For those who can manage  to do so, it's worth it to remain home.

Rosemarie Manthey was relieved to return to her longtime home in Wantagh last year after a stint in a rehabilitation facility to recover from a fall that broke her hip. Manthey, who declined to give her age, bought her three-bedroom home in 1955 and raised her four daughters here. Her daughter Meryl lives in an apartment on the second floor so she can help care for Manthey.

“I’d rather be at home,” said Manthey, who worked for 27 years as a sales representative and manager for Maybelline and then L’Oreal, traveling from Rockville Centre to the Hamptons to market beauty products. “I think you feel more loved when you’re at home, because my daughter is here and she helps out a lot."  At the rehab facility, she said, "The food wasn’t very good, so I lost a lot of weight.”

She added with a laugh, “it’s mostly mashed potatoes, which was probably from a box.”

To make the modified Levitt home safe and comfortable for Manthey, workers cut into the bathtub to turn it into a walk-in shower and installed grab bars. The modifications cost roughly $2,500, and a backup generator for her breathing equipment cost about $15,000, Meryl Manthey said.

For some seniors, modifying a home turns out to be surprisingly affordable, especially in comparison with living in a senior facility.

Sal Cirella, 82, retired about two years ago after a six-decade career as owner and operator of restaurants such as Cirella’s in Melville, as well as two other eateries on Long Island, one in Florida and several since-closed restaurants in Manhattan. He and his wife, Arleen, have lived in Melville for more than 50 years and raised their five children there, on a landscaped property that includes a fish pond. After Cirella fell last year in Florida and broke his neck, the family added a ramp outside his four-bedroom home to accommodate his wheelchair, a chair lift on the stairs so he can reach his second-floor bedroom and grab bars in the bedroom and bathroom. The total cost was less than $5,000, including an extra wheelchair and walker on the second floor, Dean Cirella, one of his sons, said.

For seniors who may be unsteady on their feet, "the whole idea here is an ounce of prevention," said Kim Kuester, owner of 101 Mobility in Farmingdale, which sells and rents mobility equipment such as stair lifts, elevators and ramps.

The new equipment "helps me live a somewhat normal life," Sal Cirella said. At home, he said, "everything is familiar and comforting."

There is more safety equipment at Cirella's home than in the rehab facility he stayed in after his fall, said Dean Cirella, 54.  He said the family considered 25 different elder-care facilities for Cirella, who has mild Parkinson's and other ailments, but "nothing compares to keeping him home."

For information about help for seniors who need to modify their homes, contact county or local government offices, or nonprofit groups: