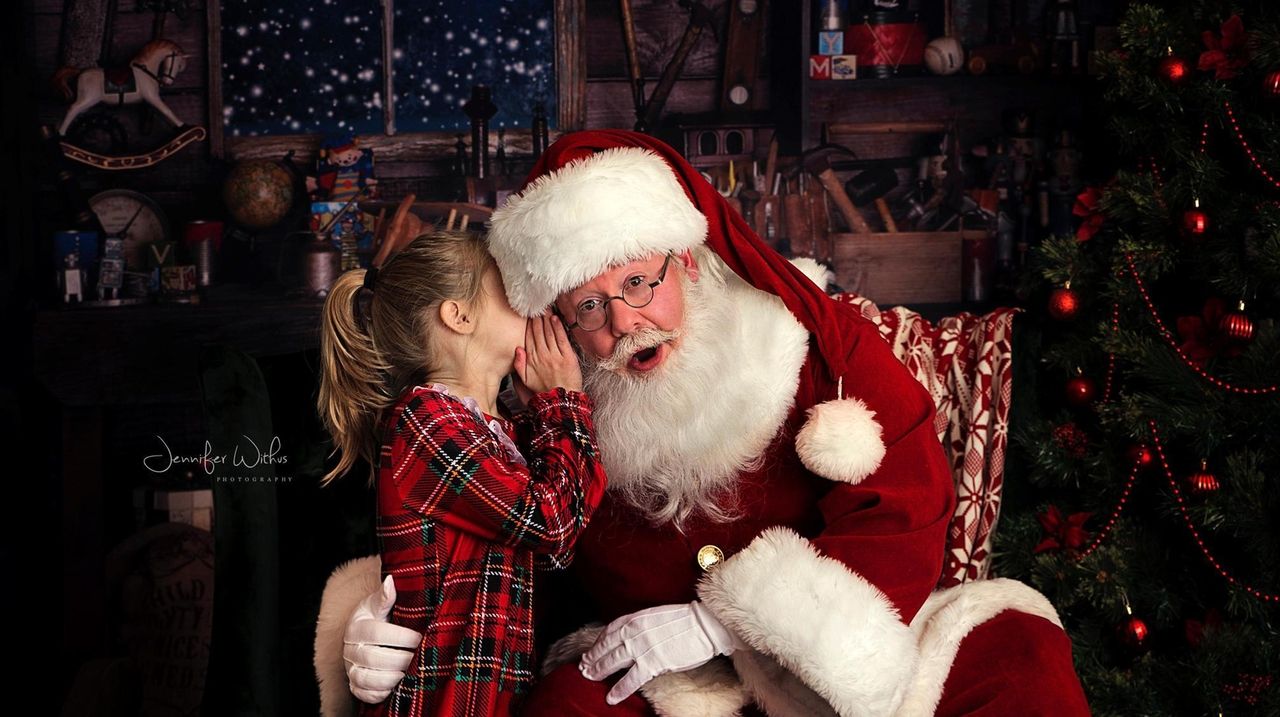 In addition to working as a teacher and DJ, Joe Bienz adds one more job in December: Santa Claus. At City Cellar Wine Bar & Grill's Brunch with Santa event on Dec. 8, Bienz described what his 25 years on the job have taught him about the business of Santa.  Credit: Linda Rosier

With Santas everywhere you look — at malls, stores, restaurants, corporate events and private parties — the North Pole resident clearly has a lot of helpers. The best of them earn $200 an hour or more.

Children can score a quick lap photo or more extended conversation with the jolly one. A Long Island Santa even offers a "catch Santa in the act" service for $200, in which parents wake their children to "catch" him putting presents under the Christmas tree in their homes.

A Santa who has the right mix — a pleasing personality, high-quality red duds and the all-important real beard — can make $10,000 to $30,000 during the holiday season, said Fred Selinsky, chairman of the California-based International Brotherhood of Real Bearded Santas.

Santas who make appearances at private homes and corporate events earn more on average than mall-only Santas, who can pull in $6,000 to $8,000 a season, he said.

But to succeed, the focus shouldn’t be on the money, seasoned Santas said.

“The core of what Santa is about is the spirit of selfless giving, giving without the expectation of something in return,” said Port Jefferson Station resident John Gebbie, 73, a retired U.S. customs broker who has been playing Santa for five years.

Veteran Santas take what they do seriously.

And they don’t look kindly upon fly-by-night Santas who come in with cheap suits and make impossible-to-fulfill promises to children.

Gebbie isn’t even a fan of the naughty list.

“There is only a nice list. There is nothing positive about telling people they’ve been naughty. You have to use positive reinforcement,” he said.

He has "degrees" in "Santaclausology" from the International University of Santa Claus, led by Amityville resident Tim Connaghan, 71, a 50-year Santa veteran who works high-profile gigs, such as TV commercials for Oreo, Target and Sears. The school offers workshops around the country that include 16 hours of instruction for $249.

Gebbie, sporting a real white beard, plays Santa at corporate events, charity functions, private homes and homeless shelters. But he wouldn’t be caught dead in the red suit at a mall, he said.

“I don’t believe that your job is just to have them take a picture with Santa and get them off your lap,” said Gebbie, who says he spends as much time as possible with each child and answers all of their questions.

Being able to meet the demand, he said, "and not have everyone ask you at the last minute."

Gebbie declined to say how much he earns but said he uses the money to vacation.

About a third of his bookings come through GigSalad.com, an online marketplace where people can book entertainment and event services, such as Santas, DJs and bartenders.

It pays to be real

“Santa is our No. 1 booked service,” said Megan Price, director of customer experience at Missouri-based GigSalad.

There are 1,810 Santas registered on the website, compared with 419 five years ago, she said, and customer requests for Santa are up 46 percent since 2015.

“We don’t have enough, so they’re usually booked fairly quickly,” she said.

Price attributed the demand to consumers placing more focus on experiences rather than material things. The increase has driven up the supply of Santas, who are treating the gigs more like a profession than a hobby, she said.

In addition to several Santa schools around the country, there are Facebook groups that help Santa live his best life by offering job training tips and mentorship, such as Santa's Secret Workshop, Santas on Facebook and the Business of Being Santa.

Santas booked through GigSalad charge an average of $200 an hour, Price said.

“The most successful Santas definitely have the real beard," she said. "They definitely get more leads and bookings than the fake-bearded Santas do."

The International Brotherhood of Real Bearded Santas has 2,100 members who are Santas and Mrs. Clauses, though Santas rocking the genuine white whiskers make up the vast majority, said chairman Selinsky, 70, of Sun City, Arizona, who's been playing Santa for 23 years.

The group offers camaraderie, training and scholarships to Santa school, he said. About 1,000 Santas, Mrs. Clauses, photographers, seamstresses and other professionals are expected at the group's Santa Claus convention in Atlanta in April.

People who grow beards because they think playing Santa will be easy money don’t last long, Selinsky said. "Why? Because it’s hard work.”

A good Santa remains in character, smiling, cheerful and engaging, for several hours straight while giving each child undivided attention, he said.

The No. 1 rule: Don’t promise anything you can’t personally deliver to a child.  And listening is key.

“They want to see a Santa that has real boots, he’s got a real belt,” he said.

That authenticity can set Santa back $1,500 to $2,000: He’ll need at least two $500, custom-made suits; $200-$300 black leather boots, and a leather belt and buckle that cost about $100 each, he said.  Most Santas carry $2 million to $4 million in liability insurance, which the association sells to members for $200 per season. The group also offers members discounted background checks for $7.50 that they can show to potential customers.

While mall Santas typically don't earn as much as Santas who do private gigs, shoppers have come to expect the mall photo op.

The tradition may help bring foot traffic to malls struggling as consumers turn more to online retailers and big-box stores.

Santa brings in crowds at Westfield South Shore mall in Bay Shore and Westfield Sunrise Mall in Massapequa, said Jeffrey Schwartz, assistant shopping center manager for Unibail-Rodamco-Westfield, owner of both locations. "It's something shoppers really look forward to. I can't imagine a holiday season without them."

Holbrook resident Joseph Aiello first put on a Santa suit when he was just 18 — a “magic moment” when he found his true calling, he said.

Now 43, he's been putting the suit on each Christmas ever since, doing gigs from corporate events to school visits.

About four years ago, Aiello, who sports a real beard that he bleaches white, took his Kris Kringle game to the next level: He created a “catch Santa in the act” service for parents.

“People were telling me their kids didn’t believe in Santa anymore, which was very disheartening,” said Aiello, a regional district manager for international food and beverage company Hudson Group. “I thought ... what better way is there to make these children believe than to have them catch him in the act, as he’s putting presents under the tree.”

Aiello’s $200 half-hour bit includes a visit in which parents wake their kids and he acts surprised when the children catch him putting gifts under the tree or filling their stockings. He “ho-ho-hos” and invites them to share the cookies and milk they've left out for him as he reads them “Twas the Night Before Christmas.” Then he sends the children back to bed and is off to the next house.

Aiello also books daytime visits. Parents explain to their children that because Santa's toy delivery schedule is jam-packed, some stops must take place during the day.

This Christmas Eve, Aiello is booked to stop at 25 Long Island homes, the most since he started the service — and stands to earn $5,000.

Social media has been a game-changer, Aiello said, providing a powerful tool to grow his business.

Aiello has been almost fully booked for about a month and a half and already has several bookings for next Christmas. He also works with several photographers who hire him to pose with clients in their holiday portraits.

This year, Jennifer Withus, of Jennifer Withus Photography in Port Jefferson, hired Aiello for $150 an hour to participate in her Christmas “mini sessions,” 30-minute holiday photo shoots with clients at her home studio. She booked eight of the shoots at $300 each.

“We had the parents fill us in" on their kids' favorite toys,  their friends' names, their teachers' names, she said. "Then we had Santa surprise them by saying things to them that only the real Santa would know.” He even showed the children the "nice list" with their names on it.

Withus said witnessing the children’s reactions made the experience special. “We got to see how excited and giddy they got and got to watch them just, you know...believe. It’s such a beautiful thing,” she said.

West Islip resident Lori Stone, who took her 3-year-old, Raymond James, to Withus for a shoot with Santa, said it's the first year her toddler is "really into Santa and excited about Christmas."

"When we walked in, Santa said, 'Hey Raymond, you've grown so much since last year,' and right away my son's face just lit up," she said. "He asked Santa a bunch of questions, about his sleigh, about the reindeer, and Santa had an answer for everything. I know the photos are a bit expensive but the fact that I got to witness all of that made it priceless."

Brunch with a side of Santa

"What can I say? Everybody loves Santa. It's so much fun and such a nice experience for all the kids and families as well as for us," she said. "

Each year the restaurant spends $350 to $500 for a couple of hours of Santa's time, Mutell said.

Joe Bienz of Nesconset, who owns events company Legendary Entertainment and teaches social studies at a Port Jefferson middle school, had the gig this year.

His company books about 100 events during the Christmas season, he said, adding that his Santas can make about $5,000.

At the brunch, Bienz, donning a fake, curly white beard, worked the room, handing out candy canes, posing for photos and "ho-ho-hoing" from table to table greeting children, some of them by name.

At one table, he enthusiastically chatted with Isabella Morone, 10,  of East Meadow, about L.O.L. Surprise! dolls — one of the hottest toys of the year. She was impressed by his knowledge of the toys, and asked him how he made them.

"You have to take the time to learn what the cool toys are, what's trending this year," Bienz said. "You really have to do your homework and commit to staying in character at all times because if you're a child, and you're here to see Santa, you want to believe that Santa is here to see you as well.

"It's all about making it as special as possible for them. This is just not a job you can do if you don't truly love it."