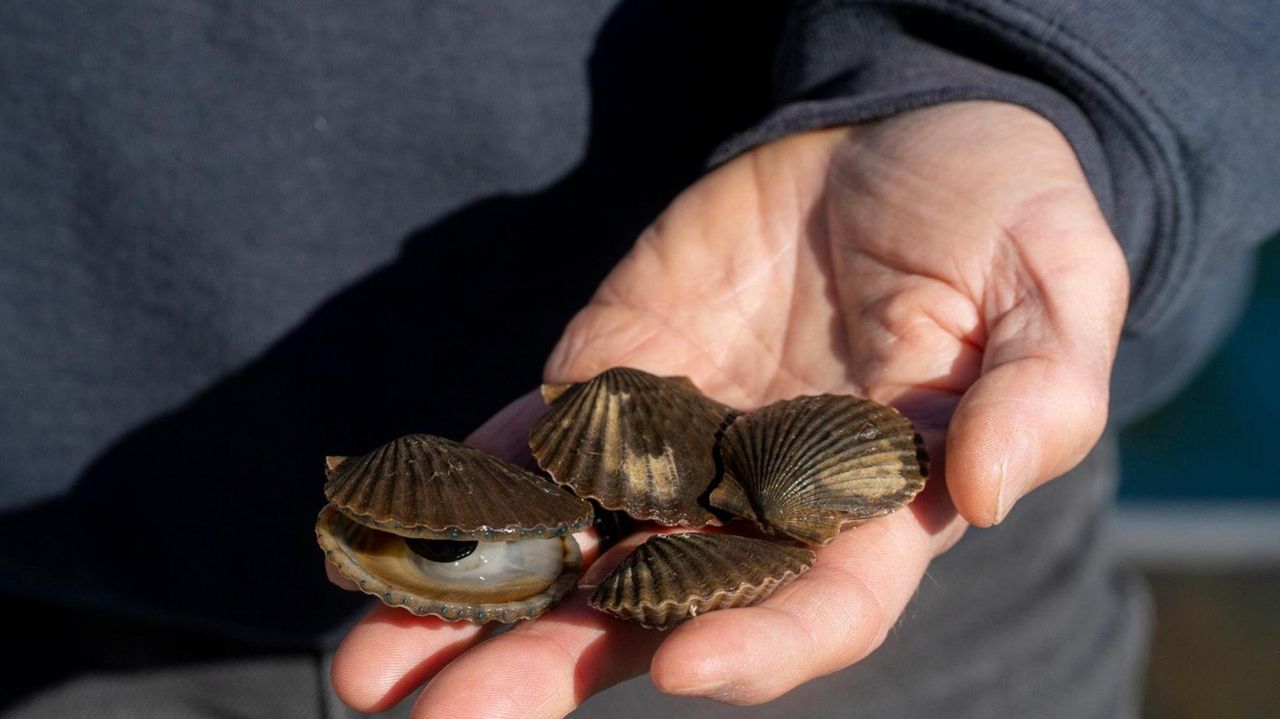 Baymen say the scallop harvest season, which starts Monday and continues through March 31, is expected to be a wipeout. Newsday's Steve Langford spoke to one Peconic bayman who ended his season before it even began. Credit: Randee Daddona; Kendall Rodriguez

Peconic Bay scallops, which endured a historic die-off last year, appear to have suffered an even worse fate this year as baymen say early trips show none are to be found, and researchers continue to study multiple potential causes.

The scallop harvest season, which starts Monday and continues through March 31, is expected to be a wipeout, fishermen say.

Longtime Peconic bayman Bob Bourguignon from Flanders said he and two other longtime baymen took a recent trip to survey some of the best scallop grounds in the Peconic and Shinnecock Bay and found not a single harvestable scallop.

"They all died," he said Friday. "All the spots that we normally find scallops, there’s nothing. When I say nothing, I mean nothing."

Like last year, when baymen and biologists confronted one of the largest known scallop die-offs in the bay’s history, fishermen like Bouguignon are baffled by the news.

"I’ve seen years when there were just a few scallops but I’ve never seen it where there wasn’t anything," he said. He plans to close up his Long Island home after Thanksgiving and head to his winter home in North Carolina.

Those who study the bay and the scallops concur with fishermen's findings.

"I would say it's as bad if not worse" than last year, said Stephen Tettelbach, a shellfish ecologist at the Cornell Cooperative Extension’s marine program. Surveys in the spring, summer and fall found gradually declining adult populations, then near 100% mortality of adults in many of those areas by August.

Tettelbach said some areas did continue to maintain heathy levels of juvenile scallops, however. In addition to warmer waters and low dissolved oxygen levels during summer spawning season, Tettelbach said cow-nosed rays, which eat adult scallops, and a protozoan parasite are considered likely factors in the die-off.

"There’s a lot we don’t know about this disease going forward," Tettelbach said. He’s working with Stony Brook University on a grant proposal to study whether selective breeding of scallops can provide higher resistance to disease, warm waters and low-oxygen levels.

Tettelbach also wants to further study the impact of cow-nosed rays on adult bay scallops. "Our restoration efforts in the past have been successful in rebuilding populations in the fishery and we believe it's important to continue that work," he said.

One major proponent of that work is Joyce Novak, program director of the Peconic Estuary Partnership in Riverhead. At a recent meeting of the Bay Scallop Technical Review committee, attendees, including Tettelbach, concurred 2020's scallop season would be "equally bad if not worse" than 2019.

"We’re waiting for the season to open but it’s not going to be good," Novak said.

She worries the die-off of the "iconic" bay scallop is ominous.

"When the bay scallop doesn’t do well clearly there’s a larger problem," she said.

The state Department of Environmental Conservation on Friday said it was "actively working with the Peconic Bay Scallop Technical Review Committee ... to help determine the factors that may have contributed to the scallop die-off last year, and identify future research and monitoring needs."

"Commercial bay scallop harvesting is a vital component to New York’s seafood industry and any loss of mature and legal-size scallops is a disappointment to both commercial baymen, and seafood dealers and markets that depend on this resource annually," the agency said, noting that bay scallop landings in 2017 and 2018 exceeded 108,000 pounds each year, with a dockside value of $1.6 million. The 2019 die-off saw a loss of more than 90% of the adult scallops, DEC said, "resulting in a collapse of this important commercial and recreational fishery. In addition to damaging economic impacts, ecological impacts continue to be monitored and assessed to evaluate scallop restoration efforts and develop future research initiatives."

The agency said it is not currently proposing changes to the scallop harvest limits or regulations. "Based on the preliminary scallop population monitoring results this year, we do not expect most shellfish harvesters to participate this season because it would not be economically viable."

Bayman Matt Ketcham, owner of Ketcham Seafarm and Peconic Gold Oysters, said loss of the scallops for a second year in a row will hurt local baymen who depend on the shellfish to get them through the winter.

"It hurts," he said, citing COVID-related slowdowns for oyster sales and red tide issues in the bays. He’s hoping to start a kelp farming business but is awaiting a needed permit from Suffolk County to get started. "It's been a tough year."