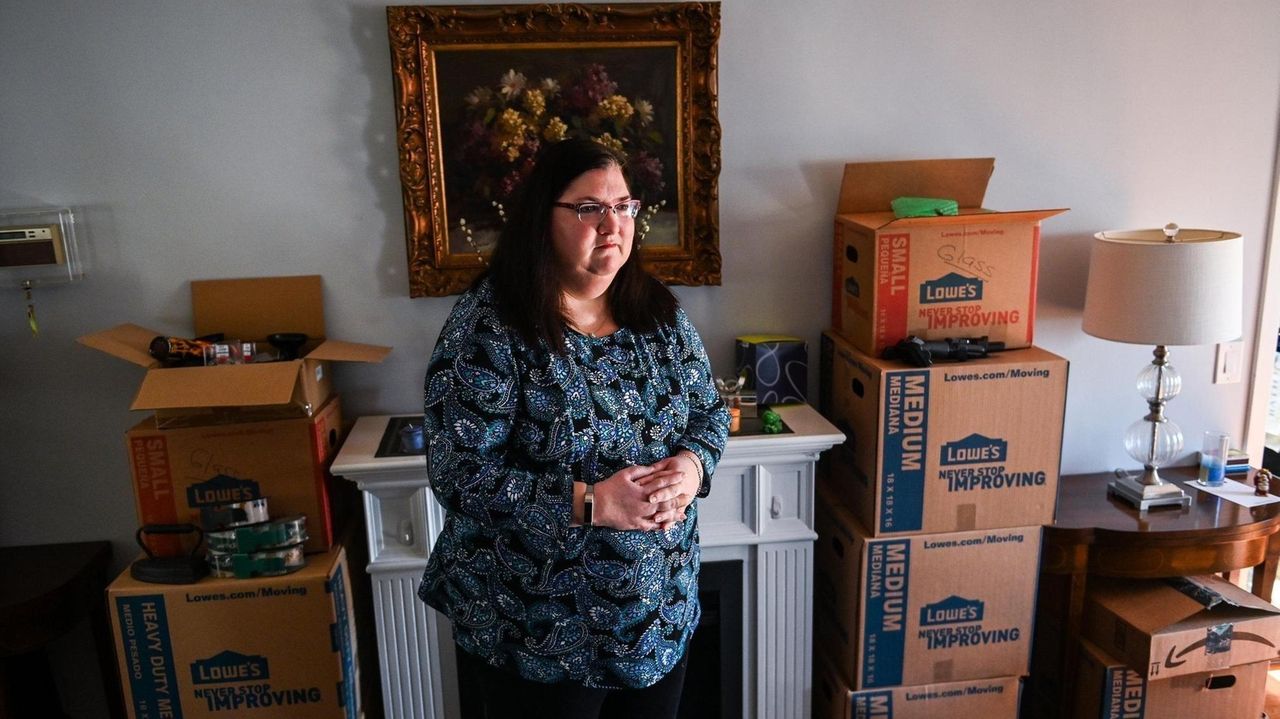 Newsday reporter Cecilia Dowd reports Friday on the Long Island woman who was scammed out of $500G after she received an email, containing one extra letter, that she thought was from her attorney.  Credit: Newsday / Steve Pfost, Chris Ware

All it took for Lynn Wiedmer to lose her life savings  and the home she dreamed of buying was a single extra letter in an email she thought came from her attorney.

Wiedmer, a former vice president at a bank in Queens,  said she had found the perfect home to purchase, a slate-blue Colonial in Glen Cove with three bedrooms, an oak tree in front and a spacious backyard. She and the sellers signed the $560,000 purchase contract in mid-December, and she made a 10% down payment, she said.

She said nothing seemed amiss when she received an email on Dec. 30 that looked like it was from her attorney, with the address of the home in the subject line.

In interviews, Wiedmer, 58, described the exchange of nearly two dozen emails that followed, and she showed the emails to Newsday:

"Good morning Lynn," the first email began. It went on to describe a "chat" with the sellers' attorney. The sender asked Wiedmer if she could transfer the remaining funds due into an escrow account that day. “I'm in jury duty most of today, but I do have access to my email,” the sender wrote.

Wiedmer soon received another email, apparently from her real estate agent, asking her to confirm she had received the attorney's email. Wiedmer asked the purported attorney for wiring instructions. The sender gave the instructions. The next morning, she said, she wired the funds: $504,350.89, representing the majority of her savings, including an inheritance.

She said she discovered later that the emails were from a scammer who had  learned the details of her home purchase, created an email account that looked like her attorney's address – using the domain name @opptonline.net, with an extra ‘p’ added to optonline – and deceived her into sending the money to a  bank account controlled by the scammer. The scammer also faked her agent's email address by deleting a period, she said.

When she discovered the fraud, “the bottom of my life fell out,” Wiedmer said.

She said she is tormented by thoughts of what she could have done differently to protect herself, and how her money is being used. 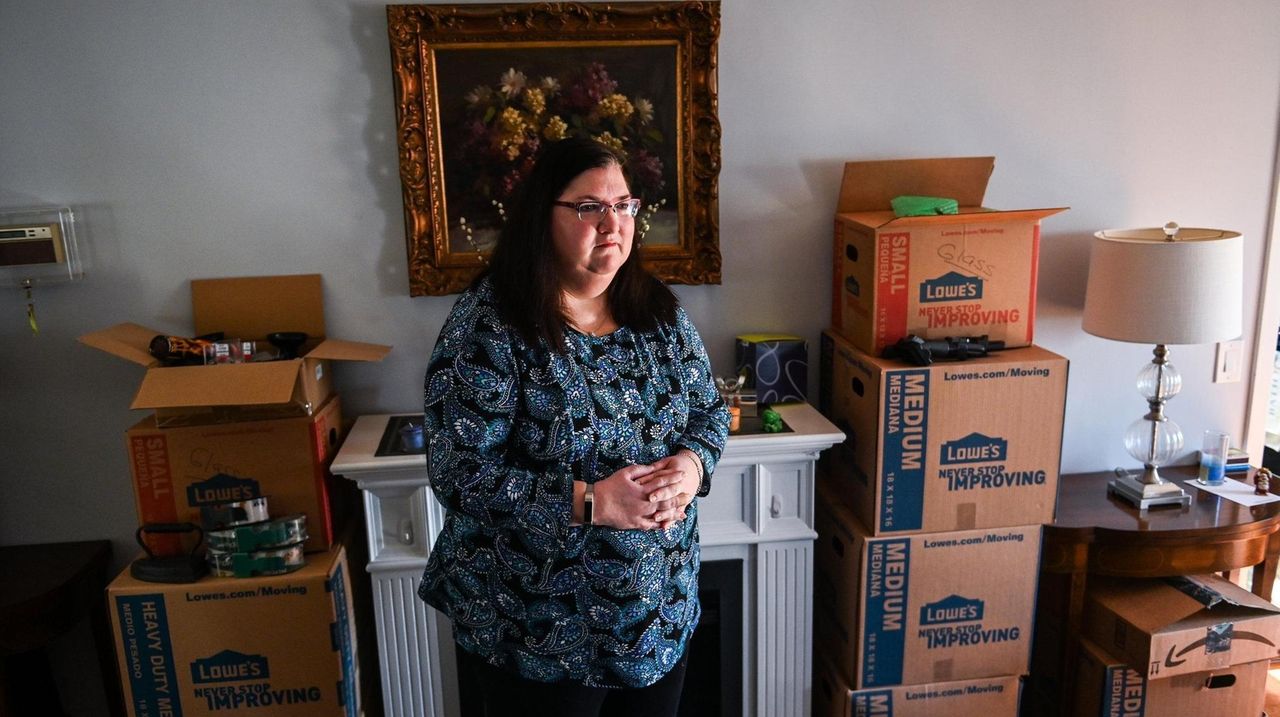 LI woman loses $500G in mortgage scam Lynn Wiedmer of Glen Head says she lost more than $500,000 when she wired funds for an all-cash home purchase to an account that turned out to be controlled by a scammer.  Credit: Newsday / Steve Pfost

“I've now had to go to therapy because I've been a victim of a crime,” she said.  “I could have funded a terrorist group…. I have no idea who did this to me. They're faceless. It's not like I can look at them and say, ‘You did this to me.’”

“And that scares me even more,” she said. “Who knew enough about me and my situation to do this?”

The devastating financial loss Wiedmer described is part of a growing trend, authorities said. Experts on internet crime say scammers are using increasingly sophisticated means to cheat their victims, such as hacking into an email account, learning details about an upcoming funds transfer and using a legitimate-looking email address to tell the victim to transfer money to an account controlled by the scammers. Last year, the FBI received 23,775 complaints about such frauds, with losses of nearly $1.8 billion. That’s a three-fold increase in complaints and a six-fold jump in reported losses, compared with five years before.

“Technology is definitely changing the landscape of financial transactions,” said Zacharia Baldwin, supervisory special agent in the FBI’s financial crime section in Washington, D.C. “Everybody wants speed and convenience. And sometimes that can also create areas of exploitation for the bad guys.”

Nassau County Police Commissioner Patrick Ryder said Wiedmer's case  “is a very complex criminal investigation requiring  numerous resources, and we have  detectives specializing in this type of fraud assigned to the case."

Police and Wiedmer asked Newsday not to publish the names of her attorney and real estate agent. Newsday is abiding by the request.

High-profile targets of similar Internet crimes include “Shark Tank” star and real estate mogul Barbara Corcoran, whose bookkeeper received an email last month from someone posing as Corcoran’s assistant, approving a payment of nearly $389,000, the website TMZ.com reported.  This week, People magazine reported that Corcoran said she ended up getting the money back, after her bank "put pressure" on a German bank to freeze the money before the scammer could collect it from a Chinese account.

The FBI fielded more than 467,000 complaints about internet crime of all sorts last year, including identity theft, romance scams and investment fraud, with more than $3.5 billion in losses. New Yorkers reported total internet crime losses of nearly $200 million, the fifth-highest in the nation.

Even Nassau County has been a target. In October, the county comptroller's office paid $710,000 to scammers who had posed as a county contractor and sent an email with new wiring instructions. The funds were later recovered. County Comptroller Jack Schnirman said controls in place at his office immediately identified the fraud, allowing the funds to be frozen. Additional security measures have been added, he said.

In many cases, it is difficult or impossible to recover funds stolen through wire transfers. Scammers often engage in “layering,” or moving money through a network of accounts, breaking it up into smaller amounts, converting it into cash, virtual currency or gift cards and moving it overseas, the FBI's Baldwin said.

“The whole goal in money laundering and the layering technique is to hide the funds,” Baldwin said. The FBI has created new teams dedicated to recovering such funds, and in its first full year of operations one of those teams recovered $300 million, the FBI reported.

“Once the money goes offshore, finding the perpetrator is almost impossible, and recovering the money is almost impossible,” said Steven Kuperschmid, co-chair of the cybersecurity and data privacy practice at the law firm Ruskin Moscou Faltischek in Uniondale. Some bar associations recommend that attorneys instruct their clients not to rely on email instructions about fund transfers, and to call the attorney’s office to verify all wiring instructions, Kuperschmid said.

Laws protecting consumers’ data generally “impose responsibility on the person or entity who got hacked, and the theory is that by imposing that liability, people will do a better job of protecting other people’s data,” Kuperschmid said. Ethical rules for attorneys also require consumer protections, he said. However, it isn’t always possible to determine how the scammers got access to the information, and even if the scammer’s email appears to come from the attorney, the scammer could have gotten the information from another account – including those of a real estate agent or home-buyer, he said.

Jerry Siegelman, chair of the real estate practice at Ruskin Moscou Faltischek, said more than half the home purchases he handles involve down-payment wire transfers by home buyers. It’s less common to send the full purchase amount by wire, but it does happen, especially if a client cannot attend the closing in person or if the proceeds of a sale will go toward the home purchase, he said. “I've been fortunate not to have this problem, but I've heard of issues like this where … wire instructions are forwarded and of course they end up being sent to a bank, typically overseas,” Siegelman said.

“These are just tragic situations, and people can lose huge amounts of money and the protections are really lacking,” said Lauren Saunders, associate director of the National Consumer Law Center in Washington, D.C.

A federal law called the Electronic Fund Transfer Act protects consumers from unauthorized transfers out of their bank accounts, but there’s “ambiguity” about whether the law applies when a consumer is duped into transferring funds, Saunders said.

In addition, Saunders said, the USA Patriot Act gives authorities tools to prevent and investigate money-laundering and other financial crimes by terrorists, but not necessarily by scam artists.

Another potential change is to make banks that receive fraudulent wire transfers responsible for consumers’ losses, which could prompt banks to step up their efforts to prevent such frauds, she said. “We need to pay more attention to these types of payment scams and come up with better protections for consumers and better red flags for institutions to look for,” Saunders said, “so they can stop these types of scams in their tracks.”

So far, Wiedmer said, she has not gotten any indication that she will be able to recover the money stolen from her.

The scam targeting her got underway on Dec. 30 at 9:46 a.m., when Wiedmer began receiving bogus emails that appeared to be from her attorney, with the caveat that he was on jury duty. The next day, Wiedmer said, she drove to the bank where she kept her life savings, including the proceeds of a recent inheritance from an aunt and uncle. She showed the instructions to a bank employee, making sure he followed the instructions carefully, she said.

A few days into the new year, Wiedmer said she received a call from her attorney’s secretary, who said she had gotten a strange call about a wire transfer.

“Well, I've been going back and forth with you for the past week about the wire transfer, and I transferred the money,” Wiedmer recalled telling the secretary. "She said, 'what money?'"

The secretary put the attorney on the phone. He told her the emails had not come from him.

“I was crying on the phone with my lawyer, pleading with him … asking him to tell me that this is a joke,” Wiedmer recalled. That day, she called her bank and Nassau County police. Later, she reported the loss to the FBI.

Now she’s still living in her Glen Head rental apartment, surrounded by the cardboard boxes she had already started packing to get ready for the move. She has lost not just her savings, she said, but “my dream of owning my own house."

She said she hopes talking about her experience might help someone else avoid the same fate.

"The reason I'm doing this interview is to warn people," she said. "You have to scrutinize everything."

How to protect yourself

The Consumer Financial Protection Bureau has warned consumers to be on the alert for wire transfer fraud schemes. The suggestions include:

Andrew Lieb, a Smithtown attorney, said law firms and real estate brokerages should use email signatures warning recipients to avoid relying on wire transfer instructions sent by email, and to check all instructions by phone.

"Everything needs to be verified," Lieb said. "That is the answer; there is no other answer."

Diane Tomb, CEO of the American Land Title Association, a trade group in Washington, D.C., said in a statement that consumers should use "a known number — not a number obtained from an email — when they are wiring money."