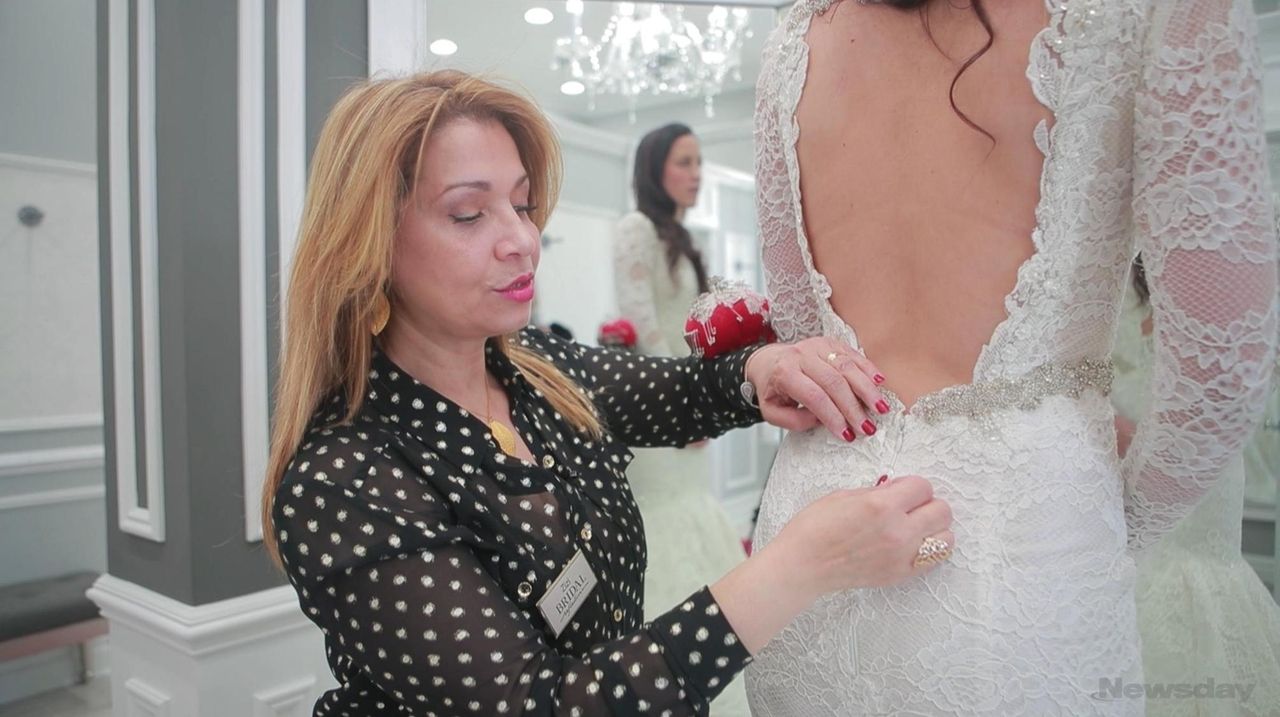 Local tailors and designers, on April 3 and April 5, talked about the future of their industry on Long Island -- why it's shrinking and how difficult it might be to sustain in years to come. Credit: Newsday / Raychel Brightman

Long Island’s seamstresses are dwindling in number, as consumers favor inexpensive, replaceable clothing, and as young people interested in fashion become designers rather than pursue the demanding, technical tasks of altering and making clothes.

And yet, when weddings, proms and other formal occasions call for their work, seamstresses prove to be indispensable.

Massapequa resident Michelle Fox entrusted Zizi Nasr, the head seamstress at Bridal Reflections, also in Massapequa, with turning the $7,500 Galia Lahav gown she found into the wedding dress of her dreams.

The gown was an intricately designed, long-sleeved, ivory garment with a train. But it was also daring, with deep cuts in the front and back that exposed a lot of skin, even her belly button.

Nasr’s alterations — by hand and on a sewing machine — took in the sides of the gown, and added a bustle for the train, a sheer panel to the bodice, lace to cover some exposed skin and around the hem, and a jeweled strap across the open back to keep the dress in place.

The gown fit like glove when Fox walked down the aisle in September, she said.

“She made it look like this . . . She was really amazing,” said Fox, 29, while wearing the gown again at the shop about two weeks ago. Fox had returned for Nasr to do some touch-ups for additional wedding photos that she and her husband planned to take in May.

Nasr, 58, learned to tailor from her father when she was growing up in Egypt and at a fashion design college in that country.

She and others who do highly skilled alterations are busy this time of year — spring and summer are the height of wedding, confirmation, graduation and prom attire business — despite being in a shrinking industry.

The number of tailors, dressmakers and custom sewers, excluding self-employed workers, in the United States declined 35 percent to 20,440 between 2007 and 2017, according to estimates from the U.S. Bureau of Labor Statistics. The number in New York State fell 24 percent to 1,680 during the same period.

The most recent data for Long Island is from 2014, when the bureau estimated that between 20 and 120 people worked in the field here. The agency no longer publishes Long Island numbers because the sample is too small or the data are otherwise unreliable. At that time, it estimated the average wage was $28,510.

Tailors and seamstresses who retire are not being replaced at an equal rate, experts said. Many learned their skills from older generations in their families, not in formal schooling.

“There’s not a lot of young people coming up and doing it. And I would say it’s because we’ve been shouting this mantra that everyone has to go to college,” said Margarette Fette, vice president of communications for the Association of Sewing & Design Professionals, a Grandville, Michigan-based trade group with about 300 members nationwide.

Young people who do have sewing skills are more likely to want to be fashion designers, she said.

The tailoring industry is also being affected by the shift to business casual clothing in office spaces that began a decade ago and the growing popularity of “fast fashion,” which is inexpensive, trendy apparel that moves quickly from fashion shows to stores, according to IBISWorld, a Los Angeles-based market research firm. Both factors have reduced consumers’ need or willingness to repair clothing that can be cheaply replaced.

Even terminology is changing. The word “seamstress” generally refers to a woman who alters clothing but does not necessarily do tailoring, which is work done by anyone on men’s and women’s suits and other structured articles of clothing, said Fette, who is also the founder of The Tailored Fit, an 18-year-old alterations shop in Bloomington, Indiana.

The words “seamstress” and “tailor” are often used interchangeably when referring to women who do the work, but “seamstress” is perceived by some as having sexist connotations because it indicates the gender of the worker. Not everyone agrees.

“I like to be called a ‘seamstress.’ . . . I like the expertise of being a seamstress in a business that years and years ago used to be just men,” said Nancy Sinoway, whose tailoring and alterations studio, Nancy Sinoway Design, in Port Washington, opened 35 years ago.

For those in the alterations business working in dry cleaners and formalwear stores, or stand-alone tailoring shops, the work is hard but rewarding, professionals said.

“I love it. My work is my passion,” Sinoway said.

She received formal training from the Art Institute of Chicago, where she majored in fashion design and earned a bachelor of fine arts degree in 1973. The key to her shop’s longevity has been offering high-quality, diverse services, she said.

Sinoway, her husband, four tailors and an assistant do work ranging from designing costumes to creating and altering formal gowns, to hemming, and restyling fur coats, she said. The shop also has a Denim Hospital, in which tailors repair jeans or convert denim pieces into other items, such as turning a jean jacket into a fur-lined vest.

Most of the employees have been with her for at least 10 years — the longest-employed is in her 70s. “People don’t want to be tradesmen anymore. It’s very difficult,” Sinoway said.

Prom and wedding season is good for her business.

“We’re kind of busy all year, but this [season] is definitely the most condensed,” she said.

Gina Sette, 71, has operated her small shop, Alterations Unlimited by Gina, in the same Deer Park location for 32 years. She learned to sew from her mother as a child growing up in Ischia, Italy, and she immigrated to the United States in 1966, she said.

“I really enjoy it. I put all my heart into it,” she said.

Entrepreneurship allowed her to help pay for her two children’s college educations, contribute to the household finances after her husband retired early with a back injury, and live independently after he died, Sette said.

Employing two seamstresses — one from Poland and one from Turkey — Sette’s shop “does everything,” but she is struck by how many customers today know so little about sewing that they are willing to pay for even the simplest jobs.

“They come here to have a button sewn,” she said.

About 13 percent of alterations employees work for dry cleaners, according to Bureau of Labor Statistics estimates. Between 2007 and 2016, the number of dry cleaning and laundry services on Long Island declined by 41, or 7.6 percent, to 502 establishments.

Tuzzi employs two women in alterations in Cedarhurst and a man doing the work in Manhattan.

His tailors work on commission, earning 50 percent of whatever customers pay for the work, which helps Tuzzi retain staff, he said.

“My turnover is different than the average person because my pricing is different,” he said.

Many businesses that depend on tailors have found more hiring success with foreign-born workers.

At Bridal Reflections, 42 tailors — all but two are women — work in alterations departments at its three locations in Massapequa, Carle Place and Manhattan, owner Roselynn Fiumara said. Most originally hail from other countries, such as Pakistan, Turkey, India, El Salvador, Italy, Syria, Portugal and Argentina, where the art of tailoring is learned at a young age, she said.

“They can take a dress apart and put it back together if need be . . . and you would never know the work has been done,” she said. Many have been with Bridal Reflections for decades.

Lina Cormace, 80, of Wantagh, has worked as a seamstress in Bridal Reflections for nearly 30 years.

She began sewing at age 7 in her native Calabria, Italy, she said recently while making alterations to a mother-of-the-bride dress in the alterations room in the Massapequa shop.

Seamstresses at bridal shops, where they are often paid by the hour, typically earn more than those at dry cleaners, Fiumara said.

Bridal shops pay better “because the work is more involved and the customer is more demanding,” she said.

Her tailors earn between $17 and $40 an hour, depending on their skill level, she said.

Nasr came to Bridal Reflections 26 years ago, and oversees the alterations team in daily tasks.

She also makes custom bridal gowns and eveningwear at home on the side, but she remains at Bridal Reflections in part because of the health insurance and 401(k) retirement savings plan.

“I want to be safe when I get to be an older lady. You can lose your business, but you can’t lose your benefits,” she said.

Tailors and those who employ them worry about the future of the industry without a sufficient number of young people taking an interest in the field.

Sinoway, 66, has an adult daughter who has no interest in the tailoring industry, so no one is lined up to take over her business when she retires.

When that will be, she’s not sure. Business is still strong, so she focuses on the day-to-day for now.

“I will die with my boots on,” she said.