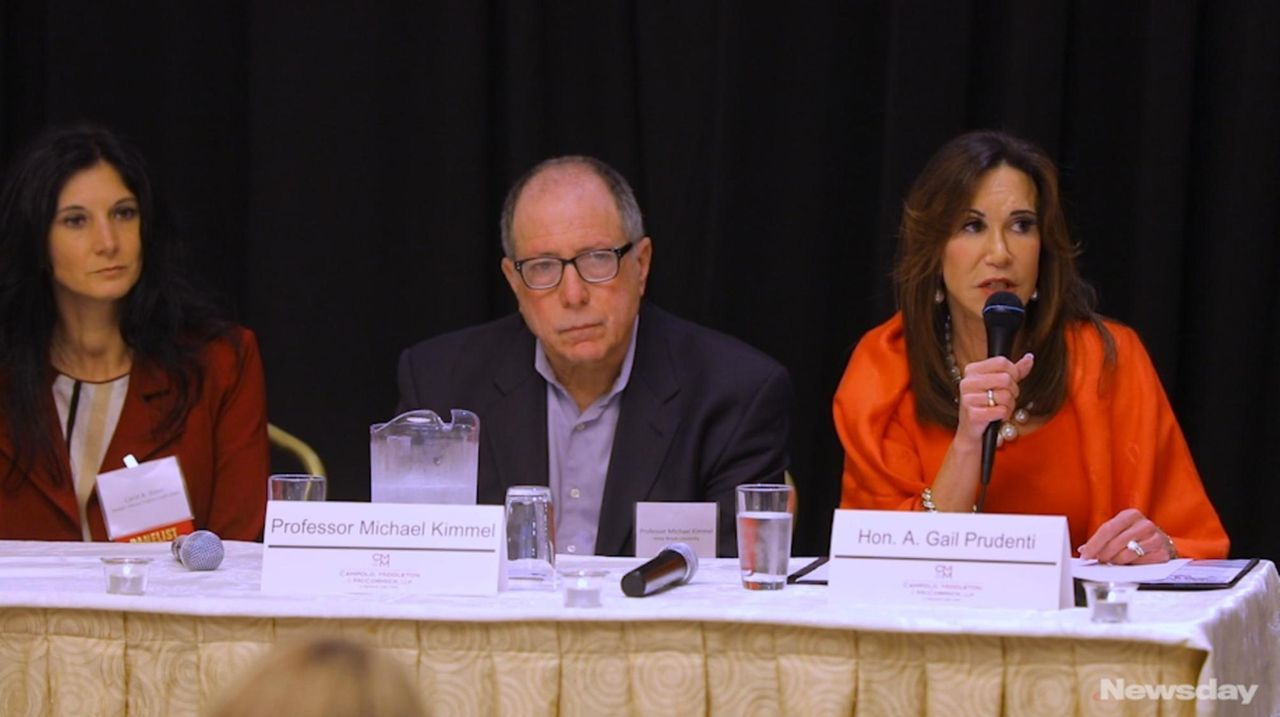 When men witness women being sexually harassed in the office, they must speak up, a panelist said Tuesday at a Woodbury discussion.

“We have to challenge other men,” panelist Michael Kimmel, a professor of sociology and gender studies at Stony Brook University told the morning meeting at the Crest Hollow Country Club. “We must be a part of this.”

Some men are afraid to challenge other men, said Kimmel, one of three panelists who discussed the topic “Beyond #MeToo: Where do we go from here?” And some men have felt uncomfortable about office interactions since the #MeToo movement exploded on social media in October, as famous women began publicly accusing powerful male executives of sexual harassment.

In his work with companies these days, one of the common things he hears from men is: “I feel as if I am walking on eggshells.”

But during the discussion, which was hosted by the Ronkonkoma-based law firm Campolo, Middleton & McCormick, Kimmel challenged men to adapt to the new environment.

“If men are uncomfortable in the workplace [after a few months], imagine how women have been feeling for two millennia,” Kimmel said.

Kimmel, who heads the Center for the Study of Men and Masculinities at Stony Brook University, suggested that a man bothered by sexist remarks in a meeting seek out a kindred male attendee afterward and share his concern. They should devise a plan for both of them to object the next time inappropriate remarks are made.

Confidence will help women navigate in the #MeToo world and any backlash against the movement, said Carol Allen, president and chief executive of People’s Alliance Federal Credit Union in Hauppauge.

“The more confidence women have, the better positions they will hold and the better off they will be,” Allen said.

Judge A. Gail Prudenti, dean of Hofstra University’s Maurice A. Deane Law School and former New York State chief administrative judge, said that confidence helped her to take aim at sexist remarks in a male-dominated world. When a man made a sexist remark, she would ask a superior to talk to him or volunteer to talk to him herself.

“Usually that would make it go away,” she said.

She and other women owe a debt of gratitude to men in the workplace who have promoted them and mentored them, she said.

In response to a question from moderator Joe Campolo, managing partner at Campolo, Middleton, Prudenti said she believes that male executives who are smart and confident and who hire women for their abilities won’t feel threatened by #MeToo.

Lawmakers call for safety measures on Southern State
Excelsior Pass a hot ticket — if you can get one from the state
26:03
LI health commissioners tout COVID-19 vaccine safety
28:26
Businesses, workers must deal with vaccine etiquette
1:53
Cops: CVS worker stole vaccine cards from Levittown store
New York should shed masks, Curran says
Didn’t find what you were looking for?