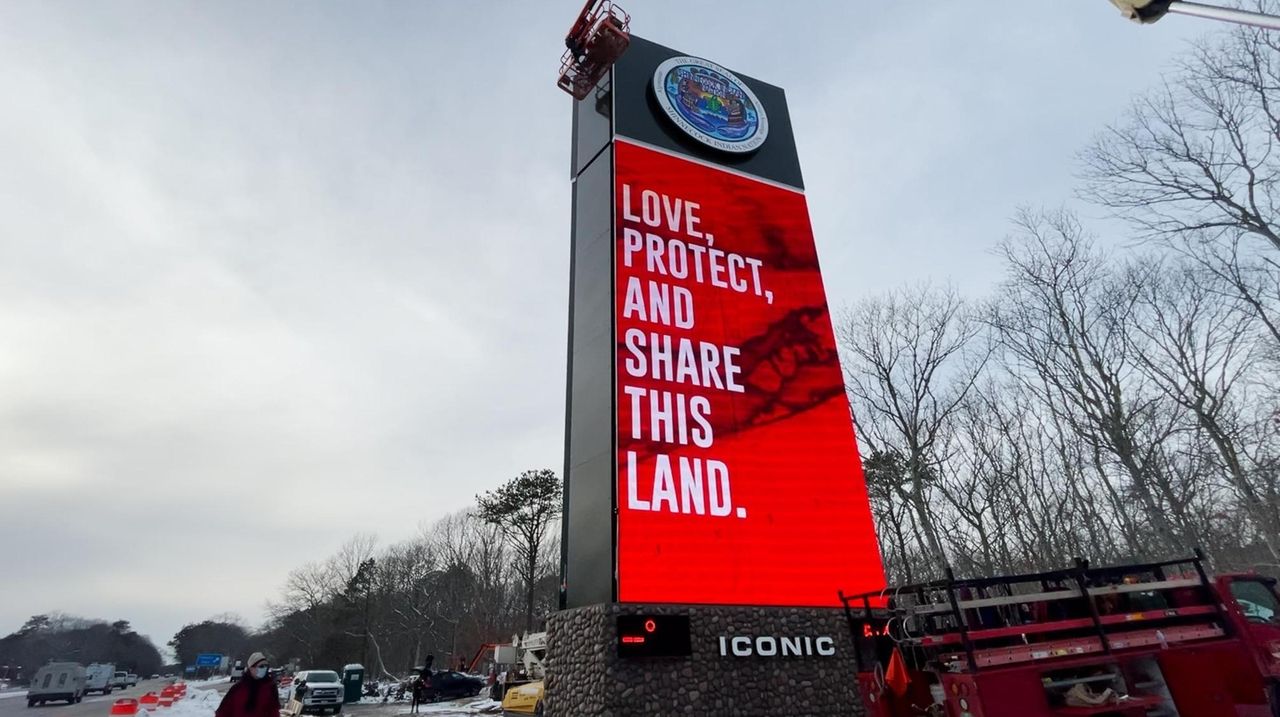 The Shinnecock Indian Nation lit its second digital billboard on tribal land on the north side of Sunrise Highway on Thursday, despite state threats of fines and removal of the structures. Newsday's Chelsea Irizarry has the story. Credit: Howard Schnapp

The Shinnecock Indian Nation on Thursday finished work on a second digital billboard, on tribal land on the north side of Sunrise Highway, amid a state threat to fine or even remove the tribal monuments.

Tribal leaders and Shinnecock supporter Roger Waters appeared at the site of the second billboard as cranes put final pieces of the digital billboard into place. It was formally lighted for the first time Thursday afternoon, including messages by Waters to "love, protect and share this land."

The final construction continued despite threats by the state Department of Transportation to fine and remove both billboards for what a spokesman said were a lack of permits and safety concerns. The federally recognized Shinnecock Nation issued its own permits for the work and has said its engineering and safety plans for the billboards meet or exceed state standards.

Waters, the Pink Floyd co-founder who is helping to fund the tribe's legal defense against the state, called the completion of the second monument a "happy time" despite the prospect of the state "threatening to come in with bulldozers and bulldoze it all to pieces." Of that prospect, he said, "Well, over my dead body."

The digital advertising billboards, located just west of the Shinnecock canal, were intended to be a new economic engine for the Southampton tribe, but a 2019 state lawsuit that sought to stop construction has tempered some of that activity, tribal members said.

A spokesman for the Department of Transportation said the state agency doesn't comment on "pending litigation."

Bryan Polite, chairman of the Shinnecock Nation's council of trustees, described completion of the second sign as a "huge morale boost" for the tribe, and said he hoped that completion would help rev income from the project, which has been stalled by COVID-19 and the state's court action.

"The summer season is hugely important for the success of these signs," he said, noting that two signs are better than one to sell advertising. "We're hopeful we're going to have a really positive, fruitful season."

Christine Lanziano, president of Digital Outdoor Advertising, which sells ads on the billboard, said with COVID-19 vaccines in wider circulation and "people getting more confident to come out," she expects advertising to accelerate for the signs, which are seen by hundreds of thousands of people a week entering and leaving the Hamptons.

Rebecca Genia, a tribal activist and co-chair of its Warrior Society, said the billboard project is about much more than "a sign. It's about sovereignty."

The signs are on tribal land on a right of way the state granted itself in a 1959 contract that lacked tribal signatures or payment, to complete Sunrise Highway, said Tela Troge, a tribal attorney, who called the practice "brazen and offensive to indigenous people."