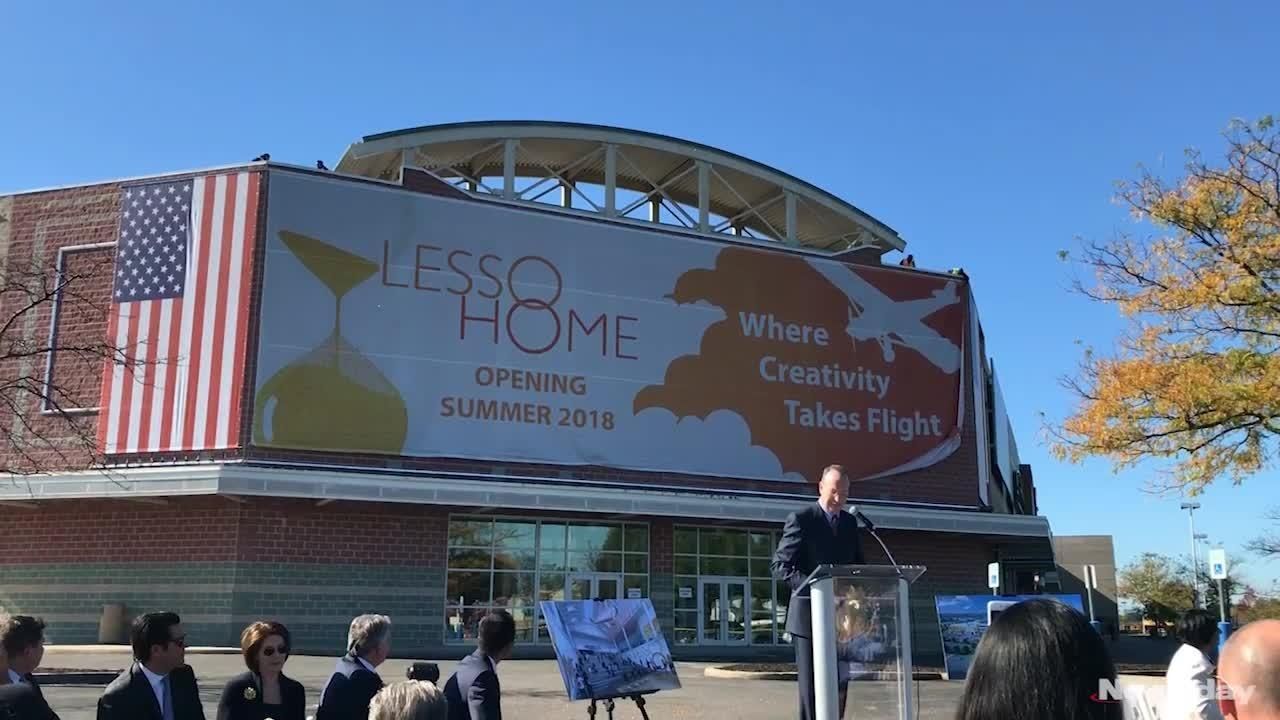 At the unveiling of the $25-million plan to renovate the Source Mall in Westbury by summer 2018 and rename it Lesso Home by the new owner, on Thursday Oct. 19, 2017. (Credit: Newsday / Aisha Al-Muslim)

The new owner of the Source Mall in Westbury on Thursday unveiled its $25 million plan to renovate the retail complex by summer 2018 and transform it into a shopping, food and entertainment destination.

The retail complex will be renamed Lesso Home. There are plans to address the mall’s accessibility issues, including constructing three entrances that connect into the mall.

The renovated mall will feature a food and beverage area, a children’s fun center, a business conference center and Lesso’s regional corporate headquarters. A “town square” will also be added for community events, live entertainment and other attractions.

“Unfortunately, over time, the Source Mall shared the same fate as many malls across this nation,” Lesso executive Michael Mai said at the unveiling outside the mall. It “needed to be reinvented and that’s where we saw an opportunity.”

Lesso Mall Development purchased the mall, which is mostly vacant now, for $92 million at the end of May. The firm also purchased the adjacent 210,798-square-foot Fortunoff building on the property. Lesso has operations and business centers in Los Angeles, as well as holdings in Texas, the Midwest and, now, New York.

“To see this retail complex reinvented into an economic engine that benefits the region is exactly what I think my dad, Alan Fortunoff, would have wanted,” said Esther Fortunoff, owner of the Fortunoff Fine Jewelry store, whose family built the old Fortunoff department store chain before it went bankrupt and closed its doors in 2009. “He understood as few did that change comes to every business sector and the ability to manage that change is the key to success.”

Mai said his company’s investment in the mall would be an economic boost for Nassau County, generating sales tax revenue, creating new jobs and strengthening the role of the Nassau Hub.

“We believe in the future of Long Island,” Mai said. “This is a great place with a dynamic economy and great people.” The renovation will “launch a new chapter of this legendary property.”

Lesso executives were joined for the unveiling by Nassau County, Hempstead Town and North Hempstead Town officials, as well as business leaders in the region and Hofstra University officials.

“There is not a family on Long Island who didn’t shop at Fortunoff, and when it closed we all lost something intangible,” Nassau County Executive Edward Mangano said. “The new Lesso concept is so exciting. It not only becomes a new space for the consumer, but it will also become a furnishing expo center for the industry. It is something that we can all be proud of.”