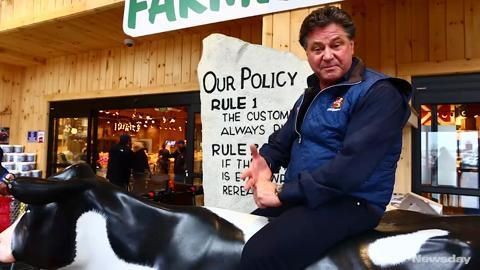 The grocery chain, Stew Leonard's, opened a store in a 60,000-square-foot space in Airport Plaza in Farmingdale on Jan. 20, 2016. Stew Leonard Jr., the president and chief executive of the family-owned and -operated company, gave a tour of his store on Feb. 16, 2016, showing all the different fresh foods it has to offer. (Credit: Newsday / Chris Ware)

“The first one on Long Island has been such a great success,” said the food retailer’s president and chief executive, Stew Leonard Jr. The Farmingdale store averages 50,000 to 100,000 customer visits a week, he said. “We are already sending trucks out there, so from an economic standpoint it is better for us to buy in larger quantities and send it out to Long Island. We are excited about Long Island overall.”

The chain, founded by Stew Leonard Sr. as a dairy store in 1969 in Norwalk, Connecticut, also has locations in Danbury and Newington, Connecticut, and in Yonkers. Each store carries national brands and private-label products and has a bakery, butcher shop, seafood department, and hot and cold buffet.

Salvaged pieces from barns in New England and Amish Country dating to the early 1900s have been incorporated into the design of the East Meadow store, including reclaimed wood, milk crates, ladders, wagon wheels and fruit bins. Like the other five Stew Leonard’s locations, the new store will have a one-way aisle.

The chain, known for its country-fair atmosphere, costumed characters and animated entertainment, will feature more than a dozen animatronic shows at the East Meadow store. The animatronic characters will include a skateboarding Bobby Banana, soaring cows of the Stew-Mont Stakes and dancing Avocado Girls.

The East Meadow store will also feature a miniature replica of Stew Sr.’s Divco milk delivery truck from the 1950s. There will be a custom-made chandelier featuring milk bottles in the dairy section, while the butcher shop will display antique wagon wheels, barn doors and a 16-foot-wide steer horn.

“Our motto is two roofs, one store,” said Dan Arthur, president of the company’s Long Island stores, who runs the Farmingdale store and will take over the management of the East Meadow store. “We are going to run both stores as world class.”

CORRECTION: The new Stew Leonard’s store in East Meadow will be located at 1897 Front St. Due to incorrect information from the company, the address was misstated in earlier versions of this story.