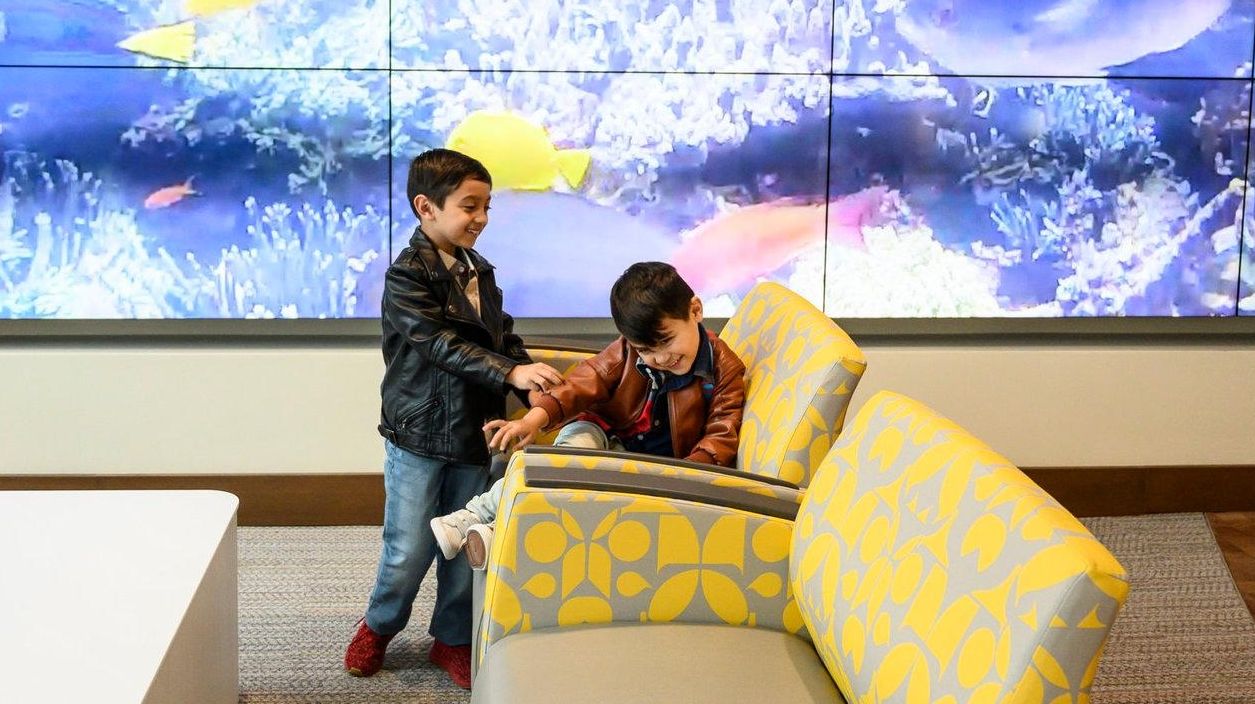 Stony Brook Medicine is opening a four-floor children's hospital, which the health system said it will move patients to on Nov. 17. The project is part of a larger $450 million expansion that also includes a cancer center on Stony Brook University’s East Campus, adjacent and connected to Stony Brook University Hospital. Credit: Andrew Theodorakis

Stony Brook Medicine is set to open a four-floor addition to its children's hospital. The health system said it will move patients to the new facility on Nov. 17.

"It all enhances the impact of Stony Brook Medicine," said Dr. Michael Bernstein, interim president at Stony Brook University. "Suffolk County is growing economically and population-wise, and our mission grows along with that, and that's to provide affordable, accessible, state-of-the-art care."

The new facility, which includes 48 single-bed rooms, will be home to a large portion of Stony Brook's children's hospital, which was formally established in 2010. The addition gives the hospital 114 pediatric beds overall. Each year it treats more than 8,000 pediatric inpatients, 25,000 pediatric emergency room patients, and sees more than 106,000 pediatric outpatients. There are 3,700 pediatric surgeries at Stony Brook annually.

"The last place a child wants to be is in a hospital," Bernstein said. "But with their reality being what it is, we have made it welcoming, non-threatening and supportive. And from a practical level, that will lead to better outcomes too."

Stony Brook said other improvements in the new facility include upgraded technology and support rooms for caregivers and patients. Included is a Ronald McDonald Family Room, which offers families of children undergoing medical treatment a place to rest and recharge. The room includes couches, computers and warm meals that are donated by area restaurants.

New Hyde Park-based Ronald McDonald House of Long Island plans to build a house on the Stony Brook campus. The house would help families of patients stay closer to the hospital.

The hospital also has a wall-length video board that has a live feed from the Long Island Aquarium in Riverhead.

"We will have 30 different pediatric specialties here," said Dr. Margaret McGovern, vice president for health system clinical programs and strategy at Stony Brook Medicine and physician-in-chief at the children’s hospital.

The specialties, which include treatment of autism and developmental disabilities, cardiology, critical care management, hematology/oncology, oral surgery and child psychiatry, will be supported by 180 pediatric physicians and more than 200 nurses.

Stony Brook also has a 46-bed neonatal intensive care unit (NICU) and serves as the regional perinatal center for Suffolk County. It has a 10-bed pediatric inpatient psych unit and the only pediatric burn center in Suffolk County. The burn center also has 10 beds. The NICU, psych rooms and burn center will remain in their current location at the main hospital.

The Children’s Hospital Task Force, chaired first by John Tsunis and then by Mark Eghrari, helped generate support for the project.

State grants, and about $50 million from a larger gift from James and Marilyn Simons also went toward the new structure.

A ribbon cutting to celebrate the opening of the children's hospital is scheduled for Thursday. The hospital will hold a community open house on Nov. 2 from 10 a.m. to 2 p.m.