Several dozen nurses, emergency medical service workers, and union leaders stood in the rain at Stony Brook University Hospital on Wednesday protesting what they said are wages that are far below those at neighboring hospitals.

The group — made up of employees of the state-funded hospital and supporters — wore red T-shirts with the words "We Deserve Better" printed on the back and spoke about how the hospital’s lower wages have led to low retention rates of new registered nurses, and increased workload and hours for those remaining.

"Nurses here make extremely less money compared to their counterparts at Mather, St. Charles, Southside and Huntington,” said Wayne Spence, president of the New York State Public Employees Federation, the union representing the hospital workers. “A nurse after 10 years here at Stony Brook will make $33,000 less than a nurse at Huntington . . . and they make about $10,000 less in their first year than at comparable hospitals.”

The Stony Brook hospital is part of Stony Brook Medicine, which includes the university, two other hospitals and scores of community care facilities. 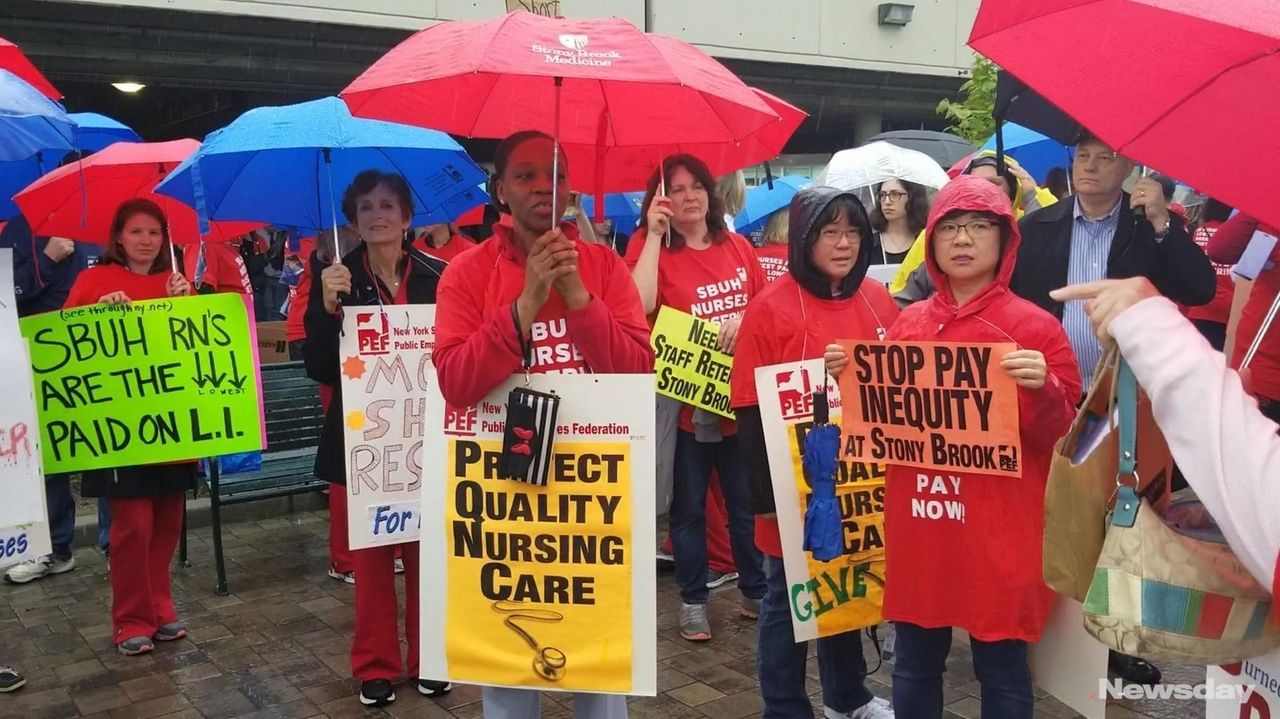 Stony Brook Hospital nurses picketing for equal pay On Wednesday, nurses picketed outside Stony Brook Medicine to bring awareness to a pay gap between them and nurses at neighboring hospitals. Credit: James Carbone

"Stony Brook University Hospital is supportive of our nurses, EMTs and paramedics. We work every day to foster a positive work environment where all employees are valued and respected,” a hospital spokeswoman said in a statement Wednesday.

Nurses and paramedics at the protest said lower wages have led to a cycle of training new staff members only to have them leave for neighboring, privately funded institutions one or two years later.

“We have very long days here,” said Amy Pacholk, a registered nurse in Stony Brook’s intensive care unit who has been with the hospital for 10 years. Pacholk said she works 12-and-a-half-hour days, and would like to have weekly work hours reduced to 36. “I don’t think people realize that our job is not only physical, it's emotional, it's psychological, and there's never a moment of rest.”

Registered nursing is one of the Island’s fastest-growing occupations. The number of RNs here jumped 20 percent between 2013 and 2017, to 28,600, U.S. Bureau of Labor Statistics data show.