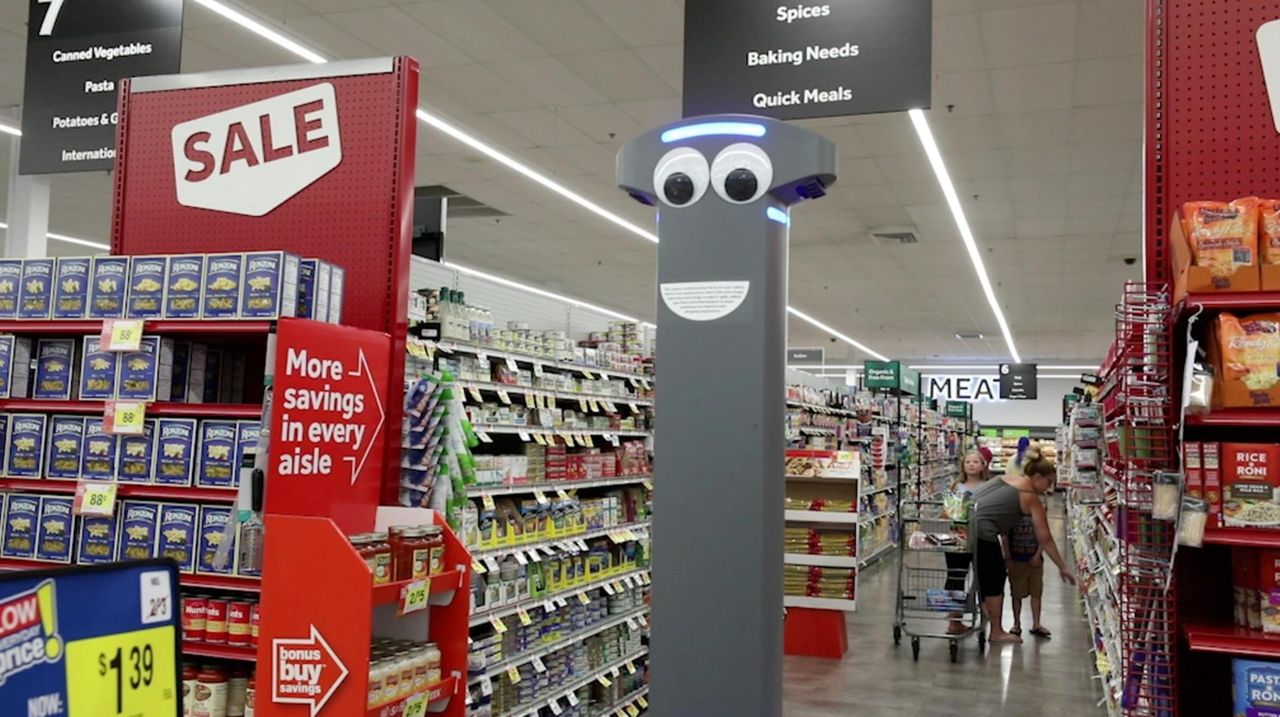 “Bye-bye” yelled one toddler to Marty in a Stop & Shop in Deer Park last week.

"Marty" is the name given to the 500 robots being placed at Stop & Shop markets and some of its sister stores in other states this year to identify floor hazards, such as spills, and to alert staff that cleanups are needed.  The robots have raised eyebrows in stores and spurred debate on social media about whether the technology is replacing human employees or spying on shoppers.

Stop & Shop said that the robots are not monitoring customers or replacing employees, who still will do cleanups.

“The idea behind it really was to free up our associates to be doing other things, which is really focusing on customers,” said Jennifer Brogan, spokeswoman for Quincy, Massachusetts-based Stop & Shop.

Since their rollout began on Long Island in June, the Marty robots have been placed in 30 Stop & Shop stores, including in Smithtown, East Northport and Levittown. Six more will be added to Long Island stores this year.

Stop & Shop has 51 grocery stores on Long Island and is in the process of buying 37 stores from Bethpage-based King Kullen Grocery Co. — 32 King Kullen supermarkets and five Wild by Nature natural food stores. There are no plans to add Marty to the King Kullen stores, Brogan said.

Stop & Shop has more than 400 stores in Massachusetts, Connecticut, Rhode Island, New York and New Jersey and is owned by Ahold Delhaize, a Dutch company.

If Marty detects a hazard, the lights at the top and near the bottom of the robot change from blue to yellow.

The robot will stop, say “Caution, hazard detected” in English and Spanish to alert shoppers, and send a signal to the store’s public address system, which announces to staff in an automated woman's voice that a cleanup is needed.

Marty’s cameras are not directed at shoppers, and its “eyes” do not function in any way except to make the robot appear friendly, Montesantos said.

Still, some shoppers have wondered about the robots replacing workers.

“How many people is this going to put out of work?” George North, 61, of Patchogue, asked Stop & Shop employees as he stood in a checkout line at the Deer Park store Thursday.

As Montesantos told North, Stop & Shop maintains that Marty will not replace employees, but will free them up to do other tasks.

Bay Shore resident Regina Augustus, 33, said she was a little taken aback by the robot while shopping with her son Jeremiah Brewster, 10, Thursday, but said it was a good for store safety.

“It’s like weird and cool at the same time,” Jeremiah said.

Stop & Shop is rolling out Marty as retailers increasingly turn to automation to help improve their margin.

In April, Walmart, the world’s largest retailer, announced it was putting thousands of additional robots in stores. That included 1,500 new autonomous floor cleaners, called the Auto-C; 300 additional shelf scanners, or the Auto-S, to scan items on store shelves to help with availability and correct pricing; and 1,200 more FAST Unloaders, which work with shelf scanners to automatically scan and sort items unloaded from trucks.

“This allows associates to move inventory from the back room to the sales floor more quickly — ultimately giving our customers what they want, when they want it,” Walmart spokeswoman Elizabeth Walker said in a statement in April.

Robots in stores will likely be viewed negatively initially by some customers and store employees concerned about human workers being displaced, just as self-checkout was when it was introduced 25 years ago, said Jon Hauptman, senior director at Inmar, an industry analytics company in Winston-Salem, North Carolina.

But self-checkout allowed retailers to redeploy labor where it could better serve customers, he said.

“And whether it be a spill or an out-of-stock … [automation is] designed to strengthen customer service,” he said.

The robot is likely the first step toward technology that is more valuable down the line for Stop & Shop, such as having robots that look at assortment, pricing and identify shelves that need to be restocked, he said.

But Stop & Shop's Brogan said, "We have no current plans for Marty to serve additional functions beyond identifying spills and hazards. ... Stop & Shop is going to continue to invest in our people, our stores, and in technology to ensure that we continue to be a market leader and continue to deliver the level of convenience and service our customers on Long Island expect."