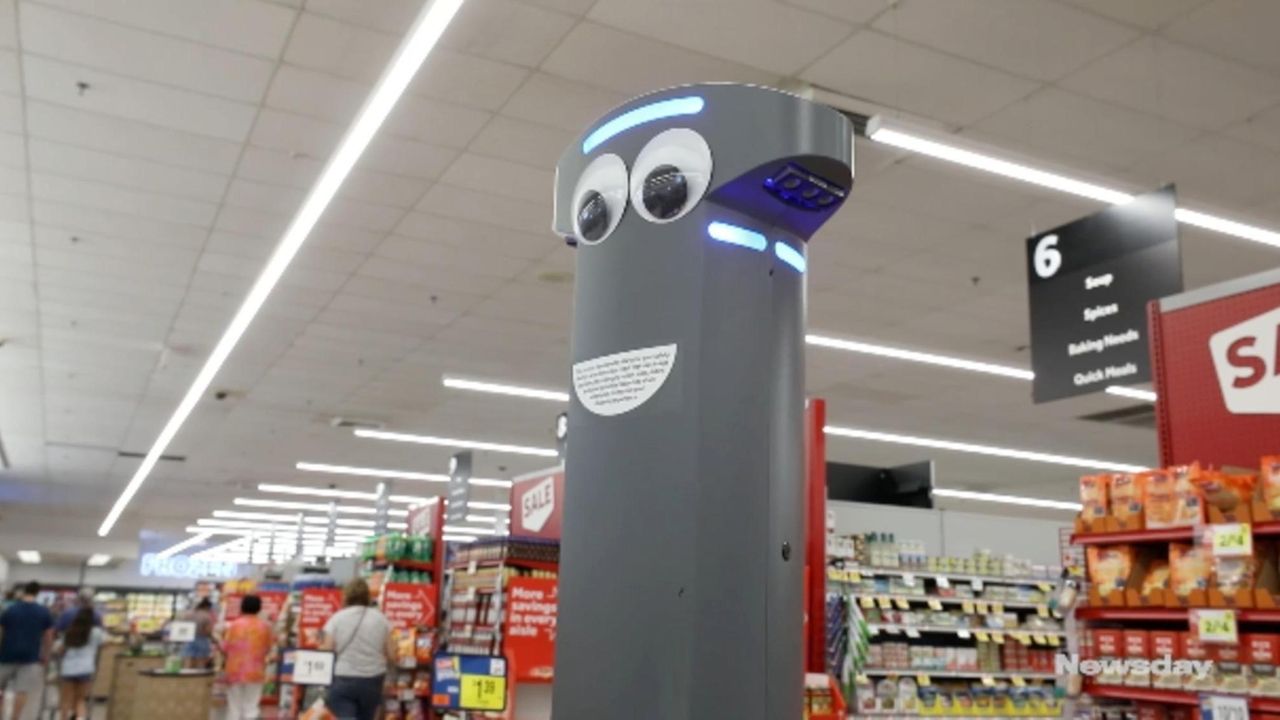 Newsday business reporter Tory N. Parrish explains the tech innovations that have been popping up in stores around Long Island, and what that means for companies and the consumer. Credit: Newsday / Shelby Knowles

Robots point out spills in store aisles at Stop & Shop.

Cameras determine how ripe the bananas are and let employees know what produce has gone bad at a Walmart in Levittown.

Automated shelf-scanners identify when stock levels are low, prices are wrong or labels are missing at Walmart stores across the country.

Customers check themselves out using a phone app at Target, without taking out a wallet or talking to an employee.

Technology is changing the way we shop, as stores strive to compete with online retailers offering seamless ordering and fast delivery, sometimes within hours.

It’s also changing the lives of retail workers, as robots and other electronic devices increasingly perform work that had been done by employees.

New technologies “are elevating the customer experience and enabling the retailer to operate more efficiently, which allows the human associates to engage differently, as well,” said Joanne Joliet, a senior director analyst who focuses on in-store retail at Gartner Inc., a Stamford, Connecticut-based research and advisory firm.

Another motive is the escalating cost of labor, experts said.

While Joliet believes the technology is allowing retailers to shift workers to other tasks that have higher value, another expert sees things differently.

With employers in several cities, including New York, already required to pay many retail workers a minimum wage of $15 an hour, “automation that replaces some of those workers or tasks can be a cost savings,” said Sucharita Kodali, a retail analyst at Forrester Research Inc., an advisory firm in Cambridge, Massachusetts.

Retail chains that deploy the new tech gadgets say they improve store efficiencies and customer service and allow workers to focus on other tasks.

But others say the changes will hurt workers by eliminating their jobs and lead to poor customer service.

“The aggressive expansion of automation in grocery and retail stores is a direct threat to the millions of American workers ... and the customers they serve,” said Marc Perrone, president of the United Food and Commercial Workers International, which represents retail workers.

“When companies automate these jobs, they hurt workers. ... They also shortchange shoppers, forcing inferior customer service and products on them for the same price,” he said.

‘For the ease of consumers’

Customers can use the kiosks to order prepared meals, salads, sandwiches and other food from the deli and then pay for the items at the regular checkout lane.

It’s “just for the ease of consumers,” Gundy said. “So, they can either stand and wait [for a deli employee to prepare the order] or, if they’re in a rush, or just to save time, they can place the order and do their shopping.”

Customers are notified via text messages when their orders are ready.

Kiosk usage has been low — about 5 percent of customers use the machines, said Adam Giovia, vice president at Uncle Giuseppe’s.

He attributed the low usage to Uncle Giuseppe’s overstaffing its deli departments because it doesn’t want customers to wait.

But self-checkout lanes are another story — that won’t be happening at Uncle Giuseppe’s, Gundy said.

“We want to keep the personal contact with our cashiers and make sure you’re talking to a real person instead of a machine,” she said.

Customer response to new retail technology is mixed. Some appreciate being able to shop in a store without ever having to interact with an employee.

For older consumers, more technology means always having to try to keep up, Wheatley Heights resident Debbie Ruiz, 66, said while in the parking lot of Uncle Giuseppe’s Marketplace in Melville on Tuesday.

She has not used Uncle Giuseppe’s deli kiosks but said she is not opposed to technology being integrated more into shopping.

“We don’t have any choice. You have to keep up with what’s going on,” she said.

For other consumers, there is a concern that this technology is replacing human workers.

At Stop & Shop supermarkets in New York State and some of the chain’s sister stores in other states, 500 roaming robots named Marty are being added this year to detect spills in store aisles and send signals over public address systems to alert employees when cleanups are needed. Since June, 30 of the 6-foot-8 robots have been put in Stop & Shop stores on Long Island.

O’Brien is not a fan.

“It’s a waste of money. ... Instead of doing that, they should make the stores cleaner,” she said.

Scan It! Mobile Pay, a type of “frictionless checkout” that allows customers to scan items on an app on their phones and swipe their phones to pay at designated spots in self-checkout areas, is available at 15 Suffolk County stores that were recently renovated, Stop & Shop spokeswoman Stefanie Shuman said.

Also, the Stop & Shop mobile app lets customers pre-order deli items from their phones before purchasing in the stores.

The point of the technology is to offer customers convenience and/or free up employees to do other tasks, not replace them, Shuman said.

“It’s letting our employees do their jobs better. There is still someone there doing the work,” she said.

In April, Walmart, the world’s largest retailer, announced it was putting thousands of additional robots in stores. They include 1,500 more autonomous floor cleaners and 300 more shelf scanners that roam the aisles to detect inventory issues or incorrect pricing, and alert staff when changes are needed.

Also, Walmart is adding more automated pickup towers, which are in 1,230 stores now and will be in 1,700 by the end of the year, spokesman Phillip Keene said Monday.

The 16-foot towers are used by customers who opt to have items they purchase from Walmart.com delivered to stores. Customers can retrieve their purchases at the towers by scanning the bar codes sent to their smartphones, without ever having to interact with store employees.

Also in April, Walmart announced it had put an Intelligent Retail Lab inside a 50,000-square-foot Neighborhood Market grocery store in Levittown.

Storewide, thousands of cameras and software were added to detect spills and monitor when products need to be restocked and when produce is too old to be sold, which eliminates the need for employees to constantly check shelves and frees them up to do other tasks, Walmart spokesman Ravi Jariwala said. Weight sensors on shelves detect when products have been removed.

A data center, which is a room filled with servers that customers see behind a glass wall in the store, processes information and inputs from the cameras, sensors and other technology.

“We plan to use the IRL as an [artificial intelligence] factory where we build and test technology products/applications, and then scale to other stores,” Jariwala said.

The benefits of technology for retailers vary, and the costs can be high, said Kodali, the Forrester analyst.

“Usually, these technologies should be more cost efficient and require less labor for things like cleaning floors or checking inventory. But they also can be expensive to deploy because the technology is expensive, and very early. Furthermore, it is likely more expensive now than it may be if a company were to wait a few years for the prices to come down,” she said.

Target recently finished expanding its Drive Up service to all 50 states. Using the stores’ Geofence locator technology, which links to the Target app in customers’ cellphones, the service lets store employees know that shoppers who have placed orders online have arrived in store parking lots to pick up their orders.

“We can get orders out to our guests with this service in less than two minutes,” said Eddie Baeb, spokesman for the Minneapolis-based chain.

He declined to disclose the percentage of shoppers using the service, but he did say that in the first half of 2019, Target fulfilled nearly 5 million Drive Up orders.

"That’s more than double the amount we did all of last year," he said.

In October, Target expanded its mobile point-of-sale service to allow employees to use handheld devices to check out customers buying items anywhere in the store.

And in the Target app, customers also can use mobile payment. Introduced in fall 2017, it lets customers with Target Red Cards — debit or credit — use the Wallet feature, which stores their payment information, to pay for items by scanning their phones at self-checkout or having it done by a cashier.

The benefit is that it’s faster than swiping a credit or debit card and entering a pin, or dealing with cash, the retailer said.

More technology in Target stores has not affected employee numbers, which have remained steady at about 350,000 chain wide over the past few years, Baeb said.

Target wouldn’t disclose its average number of employees per store.

While the total number of employees has remained steady, the number of Target stores has increased — from 1,799 to 1,855 since 2015.

But robots, scanners and other gadgets are about more than efficiencies, experts said.

“The benefit of all this technology in the store is the amount of data that is generated, which allows a retailer to be more predictive and reactive to what’s happening in a store to deliver that customer experience,” Joliet, the Gartner retail analyst, said.

The interest in technology is growing at an incredible rate, but it’s not appropriate in all retail scenarios, such as buying cosmetics or luxury goods, she said. “How you apply the technology and automation within the store needs to be appropriate to the brand experience a retailer has promised the customer.”

Robots, shelf scanners and other high-tech gadgets are not present in Lester’s, a 70-year-old, Brooklyn-headquartered retailer that sells kids’ and women’s clothing and accessories at four stores — in Greenvale, Manhattan, Westchester County and a warehouse outlet in Brooklyn.

“Generally speaking, in my type of retailing, where we’re selling to the community in a local neighborhood store, the consumer expects to be dealing with someone one-on-one, with a person they can speak to,” said Perry Schorr, whose business has eschewed robots, self-scanners and other types of customer-facing technology.

While big-box retailers, which have budgets to match, have led the implementation of store technology, consumers still expect specialty stores to catch up, according to a 2019 survey of 1,000 shoppers by A.T. Kearney, a Chicago-based management consulting firm.

“However, 58 percent of consumers expect retail technology to impact their specialty store choices in the future, nearly catching up to big box and presenting specialty retailers with a significant opportunity,” the survey found.