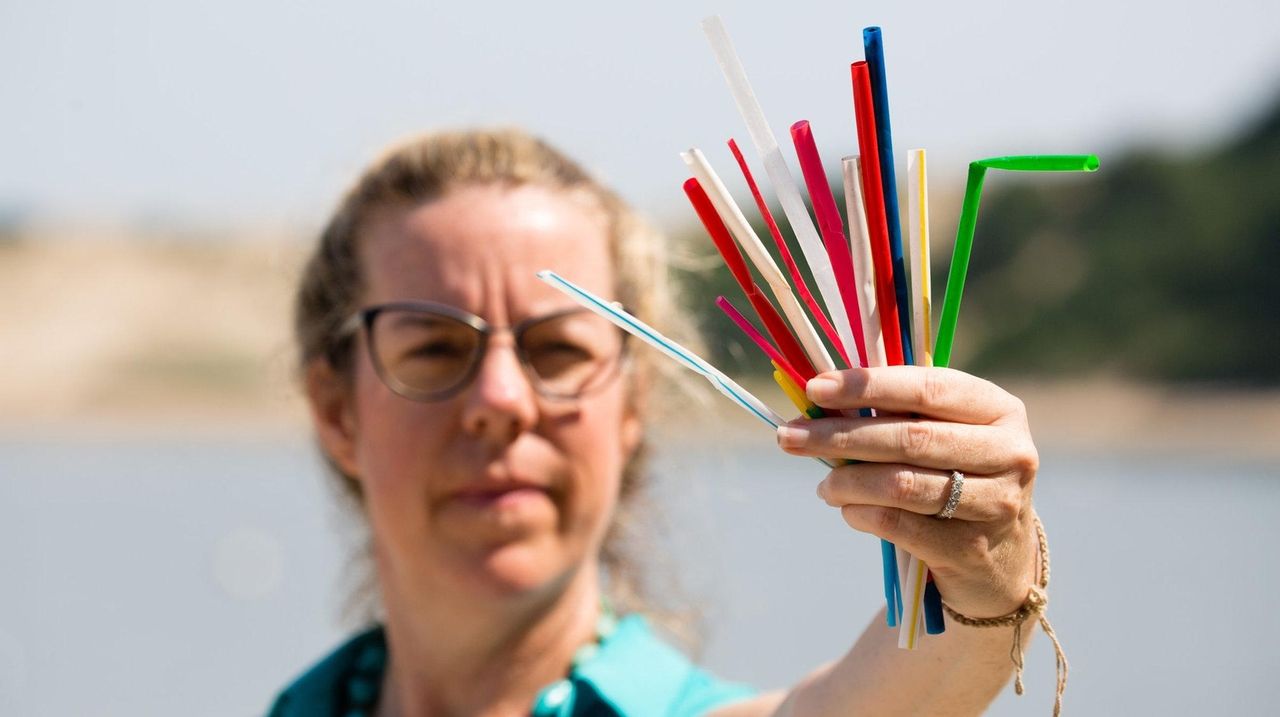 Plastic straws are not recyclable, and some people believe this problem impacts life on Long Island. On Monday, Suffolk County Legis. Kara Hahn talked about efforts to get restaurants throughout Suffolk to begin using reusable straws. Credit: Newsday / Daysi Calavia-Robertson

Switching to paper straws can have significant costs: Michael Bohlsen, co-owner of the Bohlsen Restaurant Group, which includes Monsoon in Babylon, Prime in Huntington and Tellers in Islip, estimated the changeover — including materials and marketing — has cost $25,000, and rising.

"We live on the water, we work on the water, our restaurants serve a lot of seafood, so trying to protect the ocean by making this switch was important to us," said Bohlsen. "Straws are so wasteful and for most people they're really unnecessary, and they contribute to more garbage that we just don't need to create."

Forty-four restaurants in Suffolk and seven in Nassau agreed this summer to stop providing plastic straws to customers as part of an environmental drive backed by Suffolk legislator Kara Hahn (D-Setauket) who picks up trash at the beach in her spare time.

As local restaurateurs requested paper straws this summer to substitute for plastic ones, restaurant supply distributors in Farmingdale and Patchogue said they ran out, unprepared for the sudden demand.

The LI restaurants are joining a national business movement that has focused on the ubiquitous plastic straw as an environmental blight.

Chains such as Starbucks, McDonald's, Dunkin' Donuts, Marriott International and Hyatt Hotels have said they will phase out plastic straws.

Municipalities including Malibu, California, Miami Beach, Florida, and Portland, Oregon, have gone beyond voluntary bans and have partly or fully outlawed plastic stirrers, straws and other items too small to be recycled properly.

Nearly 7.5 million plastic straws are lying around America's shores, as estimated by scientists Denise Hardesty and Chris Wilcox, of Tasmania-based marine and environmental research organization CSIRO Oceans and Atmosphere. The researchers used trash collected on U.S. coastlines during cleanups over five years to make their estimate. Further, an estimated 9 million tons of plastic trash makes its way to oceans and coastlines around the world each year.

However, an eight-minute 2015 viral video of a sea turtlee having a plastic straw removed from its bloody nostril is, perhaps, what helped accelerate the movement against straws the most. In the video, which has been watched more than 31 million times on YouTube, the male Olive Ridley turtle — an endangered species — can be heard squealing in apparent physical distress as the straw is pulled out.

Businesses are stuck in the middle as environmentalists urge consumers to stop using plastic straws, and politicians support legislative and voluntary initiatives to do away with them.

Paper straws cost about 2 and a half cents each, compared with a half-cent for a plastic straw, distributors said. Some restaurant owners say they can't afford to offer customers paper straws.

They worry that Suffolk's 5-cent fee for disposable plastic and paper bags  portends legislation requiring them to make the switch. But they also worry that about backlash from environmentally concerned consumers if they express their opposition.

Other consumers find that the "war on the plastic straw" is too drastic and disregards the needs of disabled patrons, many of whom can only drink out of straws that are bendable and nonporous.

"Local efforts to ditch the plastic straw are not well thought out," said Saint James resident Dawn Michelle Schiraldi, who complained on Facebook about the initiative to get restaurants to abandon plastic straws. "Why not pick something broader that really makes a difference instead of going after the lowly straw? What's next, plastic spoons?"

Some experts say businesses should look at the ruckus over straws as a chance to stand out.

Chase-Gregory said business owners should schedule a brainstorming session with staff to figure out "how to come out on top."

"When the market moves towards a trend like this one, businesses need to react quickly," she said. "If you adopt a measure or policy at your establishment that is good for the environment and marine life, you need to immediately market that. More than ever, it's important for businesses owners to be socially aware and make decisions accordingly to both retain and attract customers."

She added, "If a ban on plastic straws is legislated, it will be too late then" to stand out from the crowd and gain a marketing edge.

"Our goal is to convince 100 restaurants to take the pledge to become ocean-friendly," said Hahn, who participates in organized beach cleanups and has made a hobby of using an app to track the garbage she picks up, which she said often includes plastic straws.

"This means following criteria outlined by the Surfrider Foundation, which includes not using Styrofoam or plastic bags for to-go orders and providing disposable utensils and straws to customers only upon request. So far we're about half way towards reaching the 100-restaurant mark."

C'est Cheese, a 1,500 square-foot cheese-centered restaurant in Port Jefferson that sells about 150 cheeses from around the world, was the first business to sign the pledge.

Joseph Ciardullo, owner of C'est Cheese, said the strawless initiative was a natural fit with conservation efforts already adopted by the business.

However, Ciardullo said: "Plastic is so cheap that it's pretty hard to compete with. Choosing to buy an alternative product pretty much goes against basic economics."

Even so, Ciardullo says he's noticed that switching to paper straws and only providing them to patrons who ask for them has "significantly decreased" the restaurant's straw use.

He said he still keeps a few plastic straws handy in case a disabled customer or child may need one but has given fewer than a dozen since June.

At Ted's Fishing Station, a bar in Point Lookout, manager Sean Stalteri said he was sick of seeing plastic that came from the business and other nearby bars wash up at the oceanfront property.

"We'd see straws constantly on the beach and know they're just terrible for fish and birds," he said. Ted's Fishing Station took the pledge to be ocean-friendly and Stalteri said he has mostly received positive feedback from customers, who are now given a $1 per cocktail discount when they bring a reusable cup to the bar.

"I think it's a wonderful idea to prevent all those wasteful cups going in the landfills or ending up in the water," Point Lookout resident Margaret D'Angelo said between sips of a vodka, pineapple and coconut-rum mixed drink in a glittery tumbler she brought from home. "I bring my own resuable cup and straw and save a dollar off each drink, so, yeah, I'm definitely not complaining."

But not all businesses can make the switch or offer these types of deals.

A manager at a casual seafood restaurant in Westhampton Beach said that after looking into making the switch from plastic to paper straws, he realized it was "cost prohibitive" for the business.

"If it was even close, we would have done it," said the manager, who asked not to be named for fear of falling out of favor with patrons. On average, the restaurant uses one $40 case of 10,000 plastic straws a week. A case of 6,000 paper straws costs $150.

"That would mean we'd have to spend about $300 a week," he said. "We just can't afford that. For a small business every dollar counts."

Bobby Mendelsohn has worked at Bar Boy Products, a restaurant supply store in Farmingdale that services locations from Manhattan to Montauk, for 25 years.

He said he's been in the business for almost 50.

"In all my years I had not seen craziness like this," said Mendelsohn. "The paper straws are hard for even me to find."

Bar Boy Products received a shipment of paper straws on a recent Thursday, but "the last of them went out on the truck Friday," he said.

Indiana-based Aardvark Straws, which Mendelsohn and others say is the sole U.S. producer of paper straws, has a lead time of several months for orders.

The company, which was recently acquired by Hoffmaster Group, an American manufacturer of disposable tableware based in Wisconsin, has also struggled to meet the accelerating demand.

"But Aardvark as a distributor is already so expensive," said Mendelsohn. "For now, I'm just getting whatever I can get my hands on that's reasonably priced."

The company sells to hundreds of restaurants on Long Island. Of those, Mendelsohn said at least 25 have started ordering paper straws, and dozens more have requested them.

Straws imported from China are not as good and are now subject to tarriffs, he said. "This paper versus plastic fiasco is outrageous. I feel bad charging customers $150 for straws."

Steve Berg, owner of One Way Supply Corp., a restaurant supply company in Patchogue in business since 1920, commented, "Cost is irrelevant when there is no product."

He, too, says he's had trouble finding paper straws for his clients and is buying straws wherever he can get them.

"There are restaurants calling here because they want to make the switch but end up having to stick with plastic because that's all that's available," he said.

"I have orders up the wazoo and can deliver zero. Companies like Aardvark can't increase productivity overnight."

For restaurant group owner Bohlsen, taking the initiative to switch from plastic to paper straws  at multiple locations has proved to be a bigger challenge than he initially imagined.

The company replaced plastic straws with paper ones at seven of its Long Island restaurants, switched from plastic stirrers for cocktails to bamboo, removed cocktail menu images that showcased drinks with plastic straws and had the mixed drinks professionally re-photographed, trained staff on the new "upon request only" straw protocol, printed posters and cards to market the changes to customers, and collaborated with local social media personalities to launch a campaign on Facebook, Instagram and Twitter asking the public to #StopSuckingwithBRG.

"It was a lot of work," said Bohlsen. "And one of the things that really shocked us is how much money it took to make this happen. We're up to about $25,000 of investment between all the supplies we needed, marketing material, staff training, working with [social media] influencers, and we're hoping that's about the end of it, but we're not quite there yet."

Despite the high cost of the company's efforts to go strawless, the restaurateur, who lives on Captree Island, said perhaps the most challenging part of the transition was being able to secure enough paper straws.

"We had to throw our weight around to get the 40 cases of straws we pre-ordered to properly prepare for changing from plastic to paper, but when our supplier reviewed our order he was like, 'Hey listen, are you sure you want this many? I have about four dozen other restaurants looking for paper straws.'

"I mean, who would have thought that a paper straw would become such a hot commodity?"