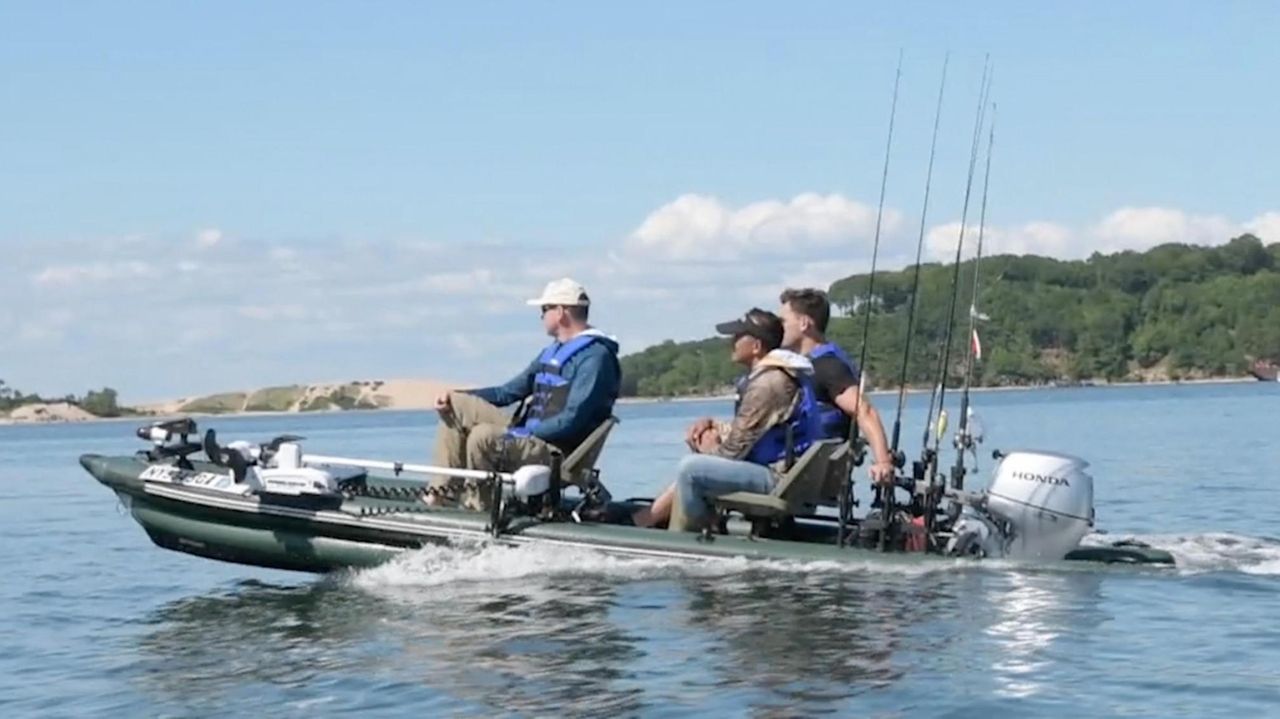 John Hoge, co-owner of Sea Eagle Boats in Port Jefferson, has found a way to adapt to the tariffs implemented by the U.S. government. Hoge moved some of his production from China to Vietnam and added a third seat to his boats, to offer more to consumers for the higher prices. Credit: Howard Simmons

Dastech International Inc., a Great Neck chemicals distributor, is seeking exclusions from the increased tariffs on chemicals it buys in China.

And Bedgear LLC in Farmingdale, which manufactures and sells bedding, bought a year’s supply of Chinese fabric before higher tariffs took effect.

Companies on Long Island and elsewhere are seeking ways to survive the trade war, which began more than a year ago when President Donald Trump hiked tariffs on solar panels and washing machines from overseas. Waves of higher tariffs on Chinese products followed, and each time China retaliated by raising tariffs on U.S. goods.

“The U.S.-China trade war is like a bad traffic jam on the LIE. … You need to get to your destination quickly, so you take the service road and local streets to navigate around the traffic,” said Savio S. Chan, CEO of U.S.-China Partners Inc., a trade consulting firm with an office in Great Neck.

He and other trade experts said the most popular detour around the trade traffic jam is purchasing raw materials and finished products from countries that haven’t yet been subjected to increased U.S. tariffs, such as Bangladesh, Indonesia, Mexico and the Philippines.

Trump has vowed to undo decades of U.S. trade policy, saying thousands of factory jobs have been lost as domestic industries grapple with a flood of cheap goods from overseas. He also has accused China of stealing inventions, research and other intellectual property from U.S. companies.

The increased U.S. tariffs that companies have been facing appear not to have been altered by Trump's Friday meeting with Chinese President Xi Jinping.

While the policy debate rages in Washington, companies of all sizes are changing how they do business to avoid becoming casualities of the trade war.

“Because of the trade war, U.S. businesses are forced to look at options to lessen the amount of increased cost that is passed on to consumers,” said Chan, the trade consultant. “Businesses can create solutions that avert the higher cost by 30 percent to 40 percent, and then they can have their customers absorb the rest. That’s doable,” he said.

“Passing all of the increase along to customers — that’s not doable. Businesses will lose a lot of sales.”

At Sea Eagle Boats, owners Cecil and John Hoge said they anticipate moving all production of kayaks, paddleboards, fishing boats and other inflatable vessels out of China within three years. The 51-year-old company designs and sells its products from Port Jefferson, but has always had them made overseas.

Vietnam became the source for one third of Sea Eagle’s boats last year after the Hoges asked their South Korean supplier to move production from China to Vietnam. U.S. tariffs on many Chinese goods were raised to 10 percent last fall and to 25 percent in May.

“We couldn’t shift everything immediately to Vietnam because they [suppliers] didn’t have the capacity,” he said. “Shifting a supply chain in one year that took 20 years to build up is so tough. It will take us two to three years to get a new supply chain.”

In the meantime, the company has added a third seat to its FishSkiff 16 fishing boat to compensate customers for the tariff-related price rise. “If we have to increase prices, we have to find ways to increase the value,” Hoge said. The FishSkiff 16 sells for $1,799.

Sea Eagle raised prices 7.5 percent this year because of the 10 percent tariff. It has 18 employees and annual sales of $9 million.

Company president Cecil Hoge said, “The effect of the tariffs on our business is like a series of tsunamis.”

Six in 10 manufacturers in New York State and retailers in the metro area  expect to be negatively affected by Trump's trade policy in the final six months of this year, according to separate polls conducted this month by the Federal Reserve Bank of New York. A similar number of factories said they had been harmed by the increased tariffs in the first half of the year, while 4 in 10 retailers said they were hurt, the polls show.

“Importers are getting hit with 25 percent tariffs, and they’re being forced to reduce costs to stay in business,” he said. “If the tariffs go away, a lot of these companies aren’t going to reverse the changes that they’ve made. They want to keep the savings.”

Cook encourages his clients to import raw materials and finished goods from Australia, Colombia, Mexico, South Korea or any of the 16 other countries that have free-trade agreements with the United States, which eliminate or lower tariffs.

He also said businesses that import goods into the United States only to sell them abroad are eligible for a refund of the customs duties that they initially paid. This “drawback” refund can be claimed for up to three years of export sales as a one-time opportunity.

Cook advised companies to use multiple strategies to "chip away" at the increased costs from tariffs. “If you go down a couple of different paths, you’re in a secure position," he said.

Cook has been helping Dastech International on ways to navigate the trade war.

The Great Neck company, founded in 1980, supplies active ingredients or chemicals to manufacturers of drugs, vitamins, cosmetics and industrial products. It has 15 employees.

“Some products can only be sourced in China,” said general manager Luz Cazeneuve, adding Dastech has four Chinese offices. “You are stuck because you cannot get the products any other place. So you pay the higher tariff and pass it along to the customer.”

Still, Dastech responded to last year’s tariff rise “by cranking up our purchasing in advance” so some customers would have additional supplies of chemicals, all stored in four warehouses across the United States, she said.

Dastech hopes the Office of the U.S. Trade Representative will grant exclusions from the higher tariffs on some chemicals. The company's earlier bid for exclusions was successful, Cazeneuve said.

Businesses in Nassau and Suffolk counties are discovering that even if a product isn’t made in China it probably contains components that were — and therefore is affected by the trade war.

“Nothing is going to evade the tariffs,” said James Feldstein, co-owner of VANA and Audio Den, both in Lake Grove. VANA is a wholesaler of high-end audio and video equipment, and Audio Den is a retailer of the equipment.

Feldstein cited the example of a record-cleaning machine designed in the Netherlands and manufactured in China whose retail price jumped by $100 to $599 after a 10 percent tariff was imposed. The price rise reduced the number of machines sold by VANA and Audio Den from 1,500 annually to 1,000, he said.

The sales drop isn’t going to imperil either of Feldstein’s companies because they have a large product portfolio or offer home automation services to owners of second homes, a market that is less price sensitive. Together, the businesses employ 20 people and have sales of about $6 million per year.

Still, Feldstein said finding a non-Chinese manufacturer of the record-cleaning machine isn’t likely to bring down the retail price. A machine from Germany sells for $899 to $999, he said.

The impact on consumers of the higher tariffs has been muted so far because importers and their Chinese suppliers absorbed most of the 10 percent tariff, said Albert Wei, president of Vizion Logistics LLC, a freight-forwarding company in Lynbrook. However, with the rate moving to 25 percent, importers and suppliers will have to pass along the increase in the form of higher price tags.

Vizion, with a workforce of 35 people and two offices in China, was busy last year arranging shipments via ocean, air and land for importers “who frontloaded bringing in their goods before the higher tariffs were put in place,” he said, adding shipments were down in the January-March period.

Farmingdale’s Bedgear ordered enough Chinese fabric and components to keep its pillow assembly lines in South Carolina and Mississippi busy for about a year, according to Eugene Alletto, CEO of the company that specializes in  mattresses, mattress protectors, pillows, sheets and blankets.

“We brought in a ton of raw material to make sure we had enough inventory for the majority of the year,” he said, referring to imports from China. “That’s how we have avoided affecting the bottom line.”

Bedgear also is securing alternative suppliers of raw materials in Vietnam, Indonesia and Malaysia — that he said ironically are often owned by Chinese investors. The 10-year-old company has grown from 63 employees in 2013 to nearly 200, including 50 on Long Island.

In addition to increasing the price of imported goods, the higher U.S. tariffs are costing local companies, such as Bedgear, the valuable time of top executives -- time that could be spent on product development and growth strategies.

“Instead of focusing on building our business, hiring employees, expanding our world and doing great things for consumers," Alletto said, "we’re all scrambling to determine how to not lose a supply line, how not to lose money and how to not go out of business.”

* Stock up — Increase imports before the tariff on them goes up.

* Find alternative suppliers — Secure suppliers in countries not subject to the higher tariffs, and reorganize the production and supply chain around them, if possible.

* Capitalize on FTAs — Use suppliers in Canada, Israel, Korea, Mexico and 16 other countries that have free trade agreements with the United States, because the agreements lower or eliminate tariffs and customs duties. Move some production to an FTA country.

* Seek tariff refunds — Apply for a refund of the customs duties paid on imports once they are sold to an overseas customer under a U.S. policy called Drawback. Refunds can be sought for export sales going back three years as a one-time opportunity.

* Become an FTZ — Seek a foreign trade zone designation, which allows goods to be imported duty-free to a defined location. Duties are paid when the goods leave the zone for sale.

* Use a special warehouse — Use a bonded warehouse to import products tariff-free if they are intended to be sold unchanged to a foreign customer within five years.

* Reduce transportation costs — Plan ahead so shipments can be made via less-expensive ocean freight instead of airfreight. Fill shipping containers completely, which may mean combining shipments with those of other businesses.

* Re-engineer products — Change a product’s design so that it qualifies for a product classification with a lower tariff.

* Seek an exclusion — Ask the Office of the U.S. Trade Representative to exempt imported goods from the increased tariffs.

* Train workers — Ensure employees have the skills necessary to respond to the trade war, including awareness of new regulations, tariffs and best practices to reduce costs. . — James T. Madore