Have bitcoin dreams? What to know about the hype, the reality and the future of cryptocurrencies

Want to be a bitcoin billionaire?

The prospect of sudden cryptocurrency riches is beckoning celebrities, speculators and entrepreneurs from Bay Shore to Beijing.

A glance at the peaks and valleys of a bitcoin price chart tells part of the story: a rollercoaster ride that potentially could build — or destroy — wealth.

On a deeper level, a digital financial future — should it evolve — would have reverberations around the world.

Questions about the future of cryptocurrencies and the digital ledger known as blockchain that's used to record their transactions abound.

The topic may come up in talking to friends, news headlines or an Elon Musk appearance on "Saturday Night Live."

The buzz has prompted some Long Islanders, like 23-year-old Timothy Varghese, to take the plunge. 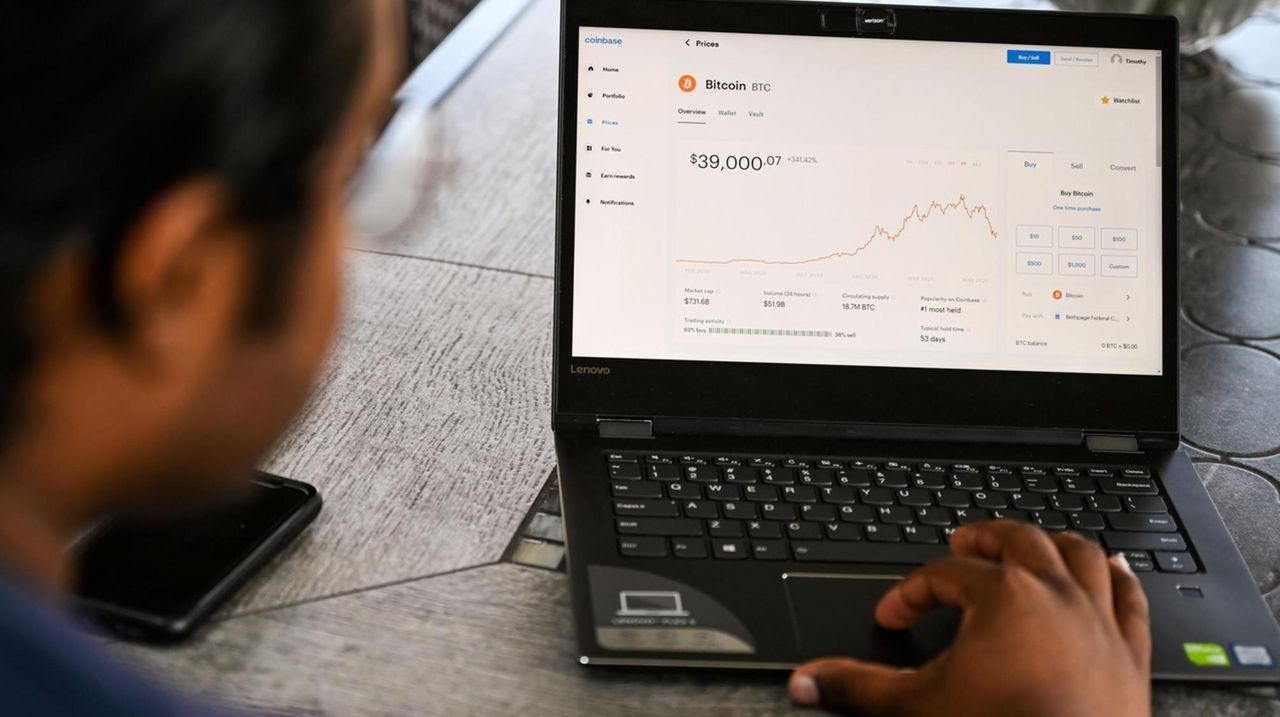 Cryptocurrency catches the eye of LIers Dix Hills resident Timothy Varghese, 23, has dipped into cryptocurrency and talks about his reasoning and how he mixes the investment with other traditional assets. Credit: Newsday / Steve Pfost

Even if they don't have a stake in cryptocurrency, nearly everyone wants to cut through the hype and jargon and get a clearer picture of the risks and rewards.

Here are answers to questions surrounding the often confusing and sometimes divisive world of cryptocurrency.

Cryptocurrency is a digital asset. Just as early cultures used stamped silver and gold coins for trade and nation-states use paper bills, digital pioneers are creating virtual currencies. These new currencies use encryption — think of strings of digits used by spies that can only be decyphered with a "key" — to secure transactions. Virtual currency can be bought and sold on exchanges instead of through a conventional banking structure. Companies like Binance, Robinhood and PayPal simplify the process of using dollars (or other currencies) to buy and store cryptocurrencies. Those accounts translate the cryptocurrency value into conventional currencies, much like a stock or bond account.

Is cryptocurrency even a currency?

The IRS considers it a property or digital asset subject to capital gains taxes — meaning you owe taxes on any profit you make when you sell the asset. IRS Form 1040 asks for full disclosure of transactions. The term currency is a "misnomer," said David Sacco, practitioner in residence in finance and economics at the University of New Haven. He considers cryptocurrencies "relatively risky financial assets," akin to high-flying stocks, that eventually could develop the attributes of a currency. At this point, bitcoin, the largest cryptocurrency, is not widely used for routine transactions though some companies like electronics retailer NewEgg and Richard Branson's space tourism startup Virgin Galactic accept it.

How does cryptocurrency compare to investments like stocks and bonds?

"Investments usually imply stability and security," Sacco said. "Speculation involves taking on more risk, in which case you expect to get a higher reward. I would put crypto firmly in that second category. For the average investor, I would say, tread cautiously and carefully...Invest only the amount you're willing to lose...For every one of those people who wind up making billions, there are thousands of other people who actually lose money."

What are some advantages of cryptocurrencies?

Cryptocurrency cuts across borders. For example, a Long Islander could easily send bitcoin home to relatives in El Salvador, which in June became the first country to accept it as legal tender. Sheffield Clark, chief executive of Coinsource, based in Fort Worth, Texas, said that his network of bitcoin ATMs — on Long Island and elsewhere — serve low-income "underbanked" populations, allowing them to skirt monthly bank fees.

How did one young Long Islander take the cryptocurrency plunge?

Varghese, a customer service banker at TD Bank in Plainview, wanted to diversify his investments.

"It comes down to how strong a person's stomach is."

The recent college graduate from Dix Hills did some research and put $150 in bitcoin and $150 in ethereum. He sold after a few months, basically breaking even., "It comes down to how strong a person's stomach is," he said of the volatility. "I can see the potential."

What are some disadvantages?

Governments could clamp down. Securities and Exchange Commission Chairman Gary Gensler this week called for Congress to grant his agency more tools to regulate "the Wild West" cryptocurrency market. SEC oversight could be extended to cryptocurrency exchanges. Those seeking a stable investment could be put off by the volatility of cryptocurrency.

What makes cryptocurrency so volatile?

Currencies issued by countries fluctuate, sometimes violently. While the U.S. dollar is stable, the Turkish lira fell 15% in March after that country fired its central bank governor. Bitcoin is not backed by a government's central bank. That makes it subject to the whims of supply and demand or even a tweet by an "influencer" like Elon Musk.

Is the supply of cryptocurrency unlimited?

One factor working to buttress bitcoin prices is limited supply: The supply of bitcoin is capped at 21 million. About 19 million bitcoins have been mined (created) so far. Some other cryptocurrencies also have limited supply while others, including ethereum, have no cap.

Is volatility good or bad?

How did it all start?

Bitcoin, the largest digital currency, was launched in 2009 by Satoshi Nakamoto, who published a blueprint for decentralized but secure transactions. Nakamoto has never surfaced in public. There is speculation that Nakamoto is a pseudonym for one person or several people. Bitcoin followed earlier efforts to create a digital currency, but was the first to gain traction.

What is bitcoin's primary innovation?

Nakamoto's system solved the "double-spend problem" by preventing someone from paying recipient A with bitcoin and then paying recipient B with that same digital currency, said Craig Rudes, co-founder of the Long Island Blockchain Council, a non-profit networking group with about 300 members who share strategies around trading and development.

The blockchain is a digital ledger that secures and verifies cryptocurrency transactions. Bitcoin's blockchain is "designed to reward good behavior and penalize bad behavior," creating a self-governing system, Rudes said. Bitcoin "miners" run a computer application whose "sole job is to solve a very complex math problem," a process that is costly in electricity and computing power. As long as the computer "plays by all the rules," it is rewarded with a fraction of a bitcoin every 10 minutes when a new block — a segment of the blockchain ledger — is created.

Tyler and Cameron Winklevoss used the Hamptons as a base as they built a bitcoin empire, according to the book "Bitcoin Billionaires." The twins are the former Harvard crew athletes portrayed in the movie "The Social Network," about the founding of Facebook.

Which celebrities are promoting cryptocurrency?

Spike Lee's commercial for Coin Cloud suggests that the cryptocurrency can empower minorities: "Old money is not gonna pick us up. It puts us down...The digital rebellion is here." Coin Cloud's ATM machines let customers use cash to buy and sell digital currencies.

Tesla CEO Elon Musk's comments have swung the markets on dogecoin and bitcoin.

How do government authorities view cryptocurrencies?

El Salvador's legislation to designate bitcoin as legal tender becomes effective in September. Meanwhile, China has cracked down on bitcoin miners, setting off an exodus to other countries.

"Countries are going to push back," said the Long Island Association chief economist John A. Rizzo. "There are several good reasons why governments might want to regulate and control it: It facilitates black-market behavior. Illicit transactions are harder to track down." Further, cryptocurrency strips central banks of their power to conduct monetary policy, he said. Tax reporting is another emerging battleground. Congress is considering requiring businesses to report crypto transactions, many of which now go unreported by individuals.

What about local and state governments?

Nassau and Suffolk counties have hosted exploratory presentations where an advocate called for agencies and businesses to consider accepting cryptocurrency. Nassau County Executive Laura Curran declared herself "agnostic" on cryptocurrencies, but open to their potential. Neither county has yet moved toward adoption.

How many cryptocurrencies are in circulation?

Some estimates put the number at about 11,000. Prices are tracked — from augur to zilliqa — by Coinbase and other exchanges. The proliferation echoes a period in the1800s when U.S. banks, churches, railroads, restaurants — almost anyone — could print private currencies.

What do critics say about cryptocurrency?

Charlie Munger, Berkshire Hathaway vice chairman, called bitcoin "disgusting and contrary to the interests of civilization." In a newsletter, Joe Favorito of Melville-based Landmark Wealth Management LLC contrasts cryptocurrency — "little more than digital entries on a computer screen" — with the U.S. dollar, which is backed by a government with legal taxing power. Favorito said his view could soften as the crypto market evolves. The LIA's Rizzo, citing a philosophy professor's lesson, said many cryptocurrency proponents don't fully understand it: "If you can't explain it in clear terms to a layman, you don't know it."

Should your business adopt cryptocurrency?

Amy Park, a Deloitte audit & assurance partner, said businesses are showing interest in digital assets, but "a whole bunch of accounting questions" are still unresolved. A Deloitte report found that onboarding digital assets "represents a significant commitment," but can be done step by step.

After years of studying it, I believe that cryptocurrency is an inherently right-wing, hyper-capitalistic technology built primarily to amplify the wealth of its proponents through a combination of tax avoidance, diminished regulatory oversight and artificially enforced scarcity.

What kind of "DeFi" innovations are on the horizon?

Non-fungible tokens are one promising technology, said Rudes, who is working on an NFT project. NFTs are digital representations of images, songs, videos or other collectibles. While digital assets are easily copied, NFT technology confers ownership of an asset, or a limited run of an asset, to the owners through blockchain technology. In March, a digital work by the artist known as Beeple sold at auction for $69.3 million at Christie's.

How I became a cryptocurrency baron (for a weekend)

On Friday, May 21, I took the plunge, buying 100 shares in Grayscale Ethereum Trust at $24.80 after headlines about China's crackdown on crypto rattled markets.

The security, ticker symbol "ETHE," does not confer direct ownership in Ethereum, a major cryptocurrency, but seeks to track its price movements. (The Securities and Exchange Commission is reviewing applications for funds that hold cryptocurrency directly.)

Over the weekend crypto continued to get crushed. (Unlike stocks, cryptocurrency trades 24 hours a day, seven days a week.)

If I had held out till the end of the day, I could have ridden that position to a gain of $26.32, enough to buy frapuccinos for Newsday's entire business staff. So much for crypto riches.

Disclosure: Ken Schachter still owns $127.57 (based on a recent accounting) worth of bitcoin and a few other cryptocurrencies.