LI's Future: What life may look like in 100 years

A storm-tossed future awaits Long Islanders, whose meals may be grown in labs and whose dark moods could be lifted by electronic implants.

Unlike today, we won't be tethered to our workplace and the place we call home will be a lifestyle choice.

That's the picture painted by experts who, at Newsday's request, peered as far as 100 years into the future. 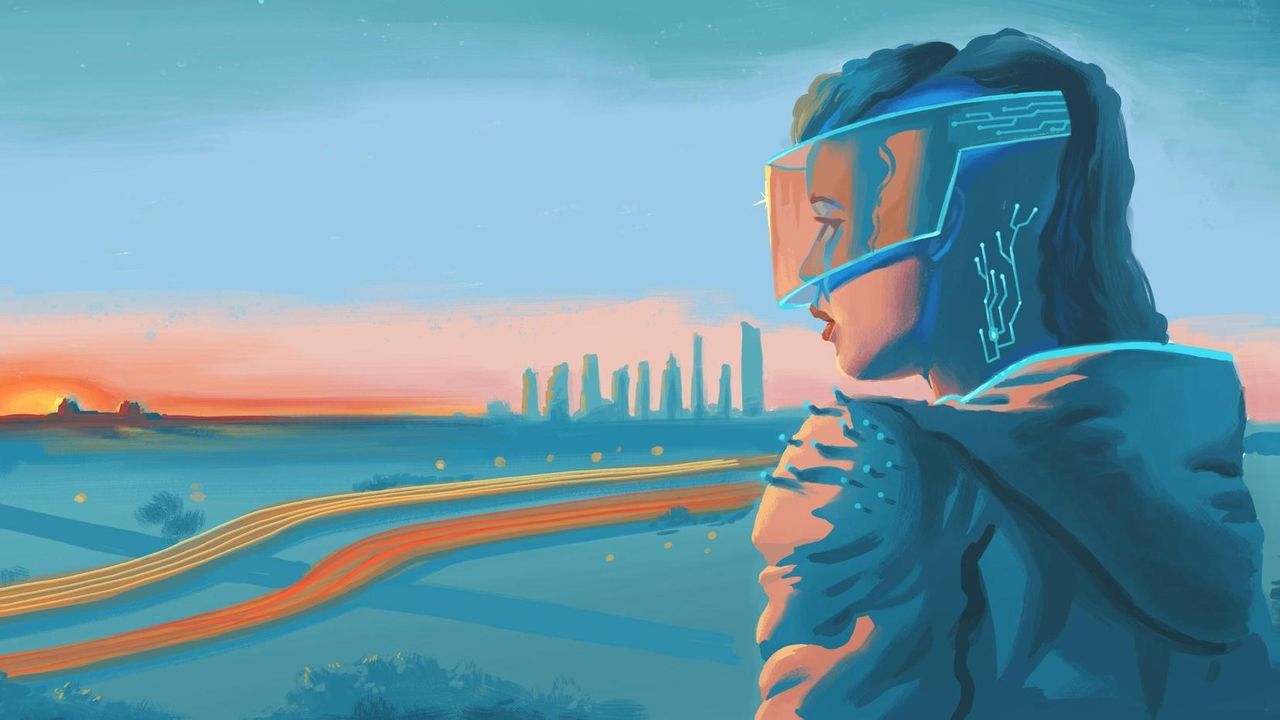 By definition, the future is inevitable and uncertain. Case in point: The COVID-19 virus turned our world upside down in less than one year.

Now consider how the region has changed in the past 100 years: In 1921, Long Island was a provincial outpost of villages, farms and woodlands. Robert Moses had yet to roll out the highways that transformed Long Island into a suburb. Jay Gatsby, F. Scott Fitzgerald's fictional embodiment of the Roaring '20s, had yet to meet Daisy.

One thing is certain: Facing the future will require agility and grit. There is no roadmap. But a quotation (with variants attributed to both physicist Dennis Gabor and Abraham Lincoln) proposes a bold path forward: "The best way to predict your future is to create it."

Long Island's economic advantage--sitting next to the global commercial capital of New York City--could erode in a new untethered world.

About 20% of Long Island's workforce commuted into New York City as of 2017, according to a report from the New York State comptroller's office.

Though the COVID-19 vaccine promises to reopen the offices of New York City later this year, the geographic connection appears diminished in the age of Zoom meetings.

"From a real estate standpoint, for decades, I'd be more willing to pay for a place that's close to work," said Jason Schenker, chairman of The Futurist Institute in Austin, Texas, and a former Wachovia economist.

The COVID-19 pandemic has shifted perceptions of remote work, e-commerce, online education and telehealth, he said.

"Now that they've tried them, many people will not go back," Schenker said. "We've crossed the technological Rubicon."

That has implications for businesses and their employees.

Some companies will relocate to cut real estate costs, while many workers will move as well.

"You're going to live in Topeka or Des Moines unless you want a social life and culture," he said. "The Charlottes, Austins and Milwaukees will be more populous. Living in New York City or San Francisco becomes a lifestyle choice rather than a [return on investment] choice."

The nature of work also will change in a century, Schenker said, as knowledge workers wield sophisticated tools that boost efficiency.

"A hundred years from now, it will boggle the mind at how much more can be done," Schenker said.

The 40-hour workweek will be a relic of the past as personal time blends into work time.

The freelance economy will expand as more individuals run their own companies, he said, and no-code technology will let non-technologists make their own software.

Robots or other machines will be enlisted to do perilous or repetitive work, but humans will continue in jobs that require an emotional connection like school nurse or highly customized skills like plumber or electrician.

At this moment, Long Islanders with epilepsy and Parkinson's disease are going about their business with bioelectronic devices implanted in their necks and connected to their vagus nerves.

"It's a technology that's exploding," said Dr. Stavros Zanos, assistant professor at the Feinstein Institutes for Medical Research in Manhasset. "These are huge diseases. They affect millions and millions of people."

In August, Tesla's Elon Musk demonstrated a computer chip implanted in the brain of a pig by his San Francisco bioelectronics startup, Neuralink. Facebook's blue-sky projects include a brain interface that would let people send texts by thinking.

"In the next 50 to 100 years, this will be a very basic tool," he said. For everyday people, that could mean turning to a brain implant rather than drugs to improve sleep or memory or simply "be happier in general."

Long Island's weather forecast for 2121 calls for increased heat and droughts punctuated by intense rain storms and hurricanes, said Kevin A. Reed, an associate professor at Stony Brook University's School of Marine and Atmospheric Sciences. Sea levels will rise (to see the projected impact on your neighborhood, click on projects.newsday.com/news/sea-level/).

Apart from the extreme weather, the region's climate of the future may be unfamiliar to current Long Islanders.

A study in the journal Nature that sought to find future analogs to the climates of 540 U.S. urban areas concluded that in 2080, many cities could experience "novel climates with no modern equivalent."

The closest fit for New York City if current trends continue, the study concluded, would be Jonesboro, Arkansas.

Climate change can be traced to greenhouse gases produced as a result of humankind's success as a species in the decades since the industrial revolution. Our increased numbers and appetite for electricity, cars and industrial products all have contributed to the problem.

The average surface temperature already has increased by about 1 1/2 degrees Fahrenheit in the Northeast since the early 1900s. That is expected to rise to 4-5 degrees versus the baseline period by midcentury. By the end of the century, that could reach an additional 5-9 degrees above the recent climate's average.

Reed said intense storms could dump 20% more rain on the region by 2100 compared to current levels.

Though the earth has warmed and cooled in the past, those changes took place over thousands of years. "The rate of change is unprecedented," Reed said.

Efforts to make the region more resilient will have to consider "Sandy plus" events, he said. While an increase in average temperatures by mid-century is irreversible, Reed said climate change still could be mitigated by shifting the electrical grid to renewable energy sources like solar and wind and making homes and businesses more energy efficient.

Farm to table, lab to table

Two trends percolating now will grow in parallel and change how Long Islanders eat in the future, said Anna Kotler, founder of FoodCubate, a Roslyn consultancy for food startups.

The farm-to-table movement will continue as consumers seek a healthier and environmentally conscious diet.

At the same time, meat alternatives, like vegetable-based Beyond Meat, and new lab-synthesized meat, will gain market share, Kotler said.

"A hundred years out, we're heading in that direction," she said. "Neither [trend] is going away."

Those trends, however, bode ill for industrialized agri-business as currently practiced.

"It's clear to me that our agriculture industry has to change to save our environment," she said.

Kotler points to companies like Hicksville-based OurHarvest as a model for bringing online-shopping convenience to farm-to-table consumers on Long Island.

"They're the beginning of the future," she said.

The future of currency is undergoing field testing in China.

"China's the first to come with a digital currency," said Anoop Rai, professor of finance at Hofstra University's Frank G. Zarb School of Business. "It's just the yuan, except that it will be in a digital format."

By 2051, Long Islanders too will be using electronic versions of the U.S. dollar, he predicted. "The majority of transactions will be digital."

Rai said some "private-sector money" like bitcoin also could survive the transition and be used in parallel to the official currency, but only if it is "credible" and can be exchanged for government-issued money.

The downside of electronic currency, he said, is that every transaction can be traced.

"The bad part about digital currency is we're headed toward a Big Brother state," Rai said. "The Big Brother part is a little troubling to me."

By 2051, the United States no longer will be the world's exclusive superpower, Rai said. China, India and countries of Africa and Latin America also may wield economic and political power that put them on par with Washington.

A new demographic, but still stuck on the LIE

An ongoing influx of immigrants from Central and South America, Europe and the Far East already is changing the face of Long Island, said John Cameron, chairman of the Long Island Regional Planning Council.

"The demographic will continue to change" in the decades ahead, he said.

In coming years, the electric grid will be powered by solar and wind power and other renewables.

Long Islanders of the future will harvest kelp for food, hydrogen for energy and desalinated drinking water from the surrounding seas, Cameron said.

In some ways, however, he said future Long Island will have some of the same problems as current Long Island: High housing costs and a heavy tax burden.

Maintaining Long Island's prosperity will hinge on developing a skilled workforce that will appeal to employers who have the option to hire workers locally or internationally.

"We have companies in my business, engineering, that send work to the Far East," he said "It's a flat planet from a business point of view."

As is the case today, unskilled workers of the future will fall behind economically, creating widening fissures between the rich and poor.

"It's going to be an economic challenge," Cameron said.

Still, even in the age of self-driving cars, he said, there are limits to the number of vehicles that fit on a highway.

"How are you going to widen [the Long Island Expressway]?"