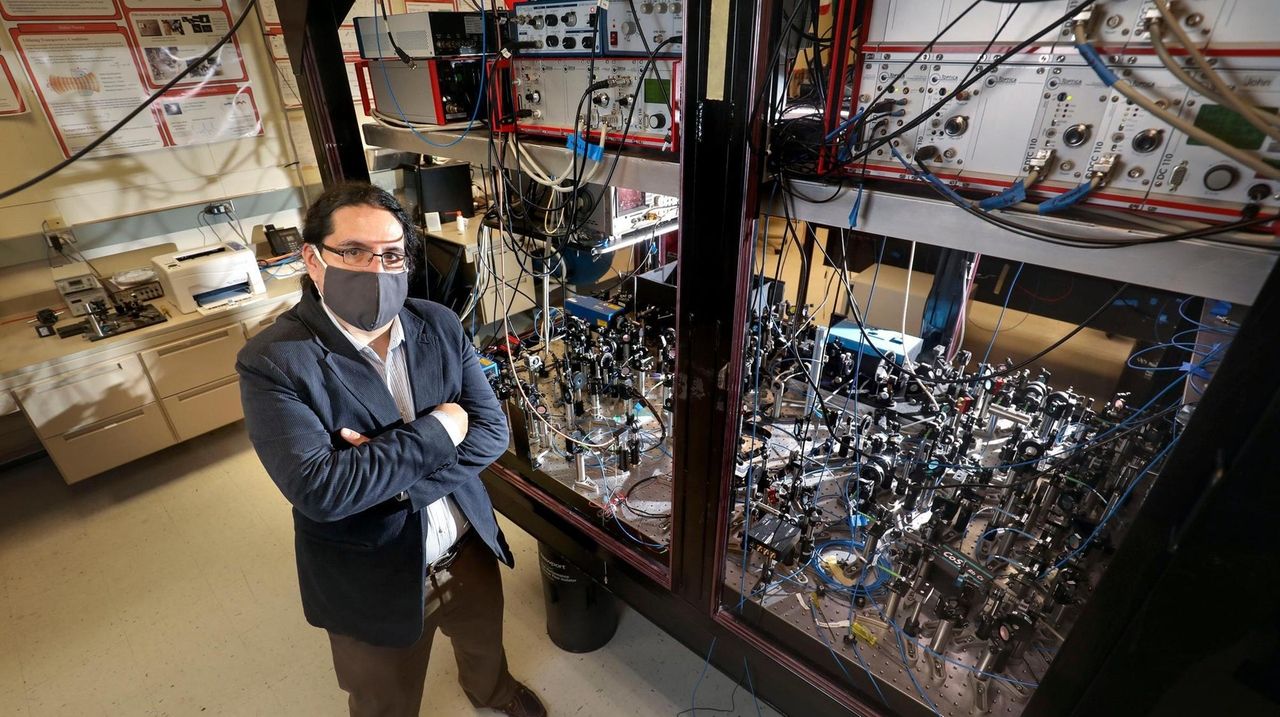 Stony Brook University physicist Eden Figueroa is among researchers working to create the next iteration of the internet that promises to be much faster and more secure than the current internet. Credit: Newsday / John Paraskevas

A new kind of internet that harnesses the properties of minute particles is taking shape in Long Island laboratories.

The nascent network, known as the "quantum internet," promises a future of lockdown security and, perhaps, vast data capacity delivered by data-hauling photons.

Already a circuitous 87-mile network between Stony Brook University and Brookhaven National Laboratory — the longest quantum connection in the country — is serving as the testbed.

The research is part of a global race, stretching from China to Europe to the United States, to harness photons' strange quantum properties. The stakes are high: Winners stand to gain a strategic edge and perhaps plant the seeds of a future Silicon Valley.

In the bowels of the university's physics and astronomy building, researcher Eden Figueroa and a team of 10 doctoral students are painstakingly building devices to transmit and store data with individual photons, the basic unit of light.

Figueroa's team members have spent years arranging lenses, mirrors, beam splitters and other devices — his students call them "Legos for adults" — into the precise configuration needed to control the photons.

The effort at Stony Brook and elsewhere is fueled in part by the vulnerability of data. The current "classical" internet is rife with security threats, ranging from neighborhood hackers to state actors that mount coordinated cyberattacks and tap undersea fiber-optic cables carrying data from around the world.

(Coincidentally, many of those undersea cables from Europe come ashore on the East End of Long Island, where the data is transferred and rerouted around the country.)

"You only know if someone hacked you when your pictures are on TMZ," joked Figueroa, referring to the celebrity gossip website and TV show.

By contrast, should a hacker intercept a photon on a quantum network, he said, the intended recipient would realize either they were missing a photon or its quantum state had been irretrievably altered by the eavesdroppers.

"If you measure it, you modify it," said Figueroa, a physics professor and head of Stony Brook's Quantum Information Technology Group, who holds a joint position at Brookhaven.

Beyond security, researchers someday may be able to create a quantum internet that carries vastly more data than current networks.

Development of a quantum internet could take decades, as with the classical internet.

"The earliest hardware devices were the late 1960s, early 1970s," said Noel Goddard, chief executive of Qunnect Inc., a three-year-old startup that is licensing quantum networking technology developed at the university. "It took 10 years before protocols started to be developed. … The actual evolution of the internet itself was not a quick process."

With that in mind, Figueroa, a native of Guadalajara, Mexico, who also serves as unpaid scientific adviser at Qunnect, has been designing devices that operate at room temperature and can use existing fiber buried along the Long Island Expressway that endures harsh conditions.

"Right now we are in the testing part where we need to answer the question: Are these devices going to be able to exist side-by-side with the normal internet?" he said.

An early answer came in July. That's when "quantum bits" — the equivalent of a "bit" (a one or a zero in a conventional network) — were sent along ordinary fiber-optic cable from two sites at Stony Brook, dubbed Alice and Bob, to a site at Brookhaven National Lab dubbed Charlie. There they were detected using single-photon counters.

Kerstin Kleese van Dam, director of the laboratory's computational science initiative, said that quantum networking programs in other countries have used special optical fiber to maintain connections, a practice that would be impractical given the vast fiber optic network already in use around the United States

"There's no way we can put [new] cable in the U.S., given those distances," she said.

The first commercial product from Qunnect, which was founded at Stony Brook and moved over the summer to the Brooklyn Navy Yard, will be a quantum memory buffer that can coordinate the delivery of single photons.

The device was miniaturized from a sprawling tabletop at the Stony Brook laboratory to the size of a shoe box and does not require the ultra-low temperatures of devices developed by other researchers.

"We're the only people trying to commercialize a room temperature" quantum memory, Goddard said. The roughly $100,000 device will be marketed to researchers.

Kevin Law, chief executive of the Long Island Association, said taking a role in the birth of the quantum internet will confer opportunities to Long Island.

"There always has to be a beginning and some pioneers," he said. The birth of the technology "presents important opportunities for our future economy."

The budding field will require workers with specialized skills.

Maung-Gaona said the university hopes to win approval within a year and spread the program to other research-intensive campuses in the SUNY system.

Some of those SUNY campuses will be connected when the Stony Brook-Brookhaven quantum link expands, first into Manhattan and then Upstate, eventually stretching to the University at Buffalo.

Funding for the Stony Brook and Brookhaven research efforts — including about $14 million from the state and federal governments over the past five years — is aimed at keeping pace with efforts elsewhere.

Domestically, the Argonne and Fermi national laboratories have joined with the University of Chicago to create a quantum connection rivaling the one on Long Island.

Members of the European Union have formed the Quantum Internet Alliance.

China, meanwhile, grabbed headlines by launching its Micius satellite in 2016 devoted to quantum networking. That spurred the U.K., Japan, India and NASA to advance their own quantum space communications projects.

Washington's quantum largesse has extended as well to developing quantum computers, which someday could be linked by the quantum internet. In July, the Department of Energy committed $115 million to Brookhaven National Lab to establish a quantum research center. All told, five national laboratories, including Brookhaven, will receive $625 million over five years.

"Now that we have this ecosystem of academia, national labs, and also the private sector," the United States finally is competing on a level playing field, Figueroa said.

Looking ahead, he sees quantum repeaters as the next great challenge of quantum networking.

On traditional fiber-optic lines, repeaters are used to regenerate and extend the range of data.

Quantum repeaters, which amplify the phenomenon known as entanglement (see sidebar), will require a clever design to avoid compromising the data, Figueroa said.

Einstein struggled with it, too

The special properties of the subatomic realm are at the heart of the quantum internet's promise.

At the same time, the rules of the quantum road seem to defy logic.

Quantum theory, developed in the early 20th century, states that a photon's state can be both a one and a zero simultaneously, a phenomenon known as "superposition."

(That contrasts with classical computers and networks whose switches are either in the on or off position, generating strings of either ones and zeros assembled to become what you see on a computer screen.)

Further, once it is measured, the photon will collapse into either a zero or one state, losing the information it carried. (This paradox of simultaneously being in two states is explored in the Schrodinger's cat thought experiment.)

Another aspect of the quantum world is "entanglement."

'Spooky action at a distance'

Entanglement theory states that when a photon is generated and then split in two, the two lower-energy offspring can instantaneously share information even if they are separated by thousands of miles with no physical connection.

A skeptical Albert Einstein famously struggled with this idea, dismissing it as "spooky action at a distance."

"If ... something happens to the twin living on the other side of the country," the healthy twin might feel a twinge in their heart, he said.

Unlike the teleportation in "Star Trek" where Captain Kirk utters "Beam me up, Scotty" and is vaporized and reassembled on the bridge, entanglement only moves data.

“That, of course, is science fiction," Figueroa said of "Star Trek." "But when you have entangled photons, you can do teleportation, but only for information."

Figueroa said entangled photons carry the potential to transmit large amounts of data over long distances on the quantum internet, but a viable system remains over the horizon.

Early next year, Figueroa and other researchers are planning to demonstrate entanglement between two quantum memory buffers, one at Stony Brook University and one at Brookhaven National Laboratory.

Figueroa said that would be the first time in history that two quantum memories will be entangled over such a long distance.

"When people talk about the quantum internet, that is what they have in their minds," he said. "It kind of sounds mind blowing, right?”